The office KRAFT.RAUM. Landscape architecture and urban development was founded in 2011 by René Rheims in Krefeld. René Rheims was fascinated by landscape architecture from an early age so it was clear that he would also devote himself to landscape architectural profession. But he wanted to think outside the box and make his own experiences outside from Germany. Therefore, he commenced his studies of landscape architecture in Edinburgh, Scotland. René Rheims made his first professional experiences in various offices in the UK. The focus of his work in the UK was primarily on design concepts. In 2009 René Rheims came back to Germany and started to work at renowned offices. After two years as the head of the competition team he wanted to build and realize his own visions and therefore decided to start his own practice in 2011. He started off by taking part in an open competition in Konstanz for a public square adjacent to the Lake Bodensee, which was awarded the first prize. This was followed by several other successful competition entries. In only ten years the young and dynamic team has planned and realized remarkable and innovative projects in Germany and abroad.

The team of KRAFT.RAUM. meanwhile consists of 25 talents and friends from 6 countries and an average age of 32. The friendly and creative team culture is the defining factor of the personality of the office. KRAFT.RAUM has won numerous competitions and awards and has an international portfolio of exciting and challenging projects.

What we do? Sustained – Functional – Innovative

The current projects range from masterplans for entire city districts to corporate company headquarters, parks, pedestrian zones, squares and streets, to the detailed planning of public furniture systems. The emotional aspect of our design philosophy means the intensive engagement with the respective location. This is necessary in order to create a space that respects and reflects its past and is accepted by the users. The functional and technical aspect of our design philosophy means that right from the start we have the feasibility and practicability of all design ideas in mind. Each project is a challenge for us, to find the consensus between the functional requirements, an efficient cost management, the wishes and needs and a great design.

What we believe in!

KRAFT.RAUM. are interested in landscape architecture not just how it influences the development of our cities but how it sets the people’s daily lives and how they deal with their environment.The office is passionate about design and integration. We are working closely together in a studio environment to create places which are unique, memorable and long lasting. We do not distinguish between different scales while working on a project. During a design process we continuously zoom in and out considering every possible scale and perspective. KRAFT.RAUM. firmly believes in working as part of a collaborative process through which we can create lively environments that contribute to people’s health, happiness and wellbeing. Our young and dynamic office will continue to grow. No matter what happens, you will surely hear a lot more from our KRAFT.RAUM crew in the future! 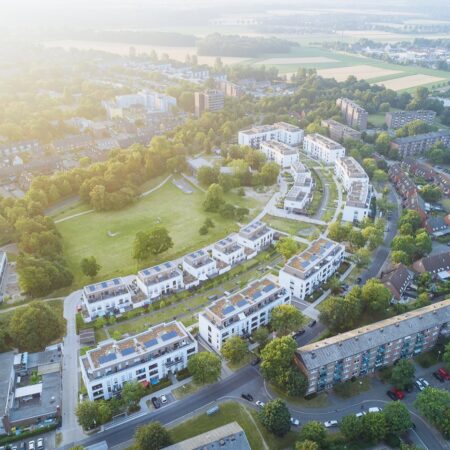 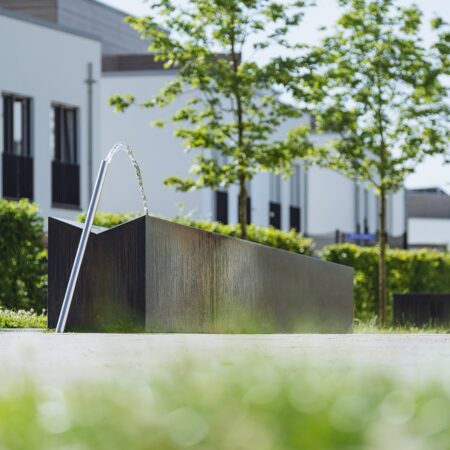 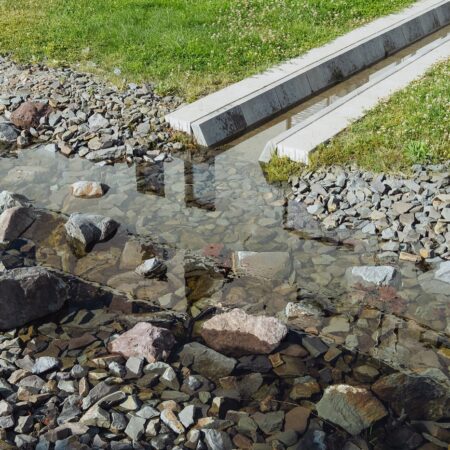 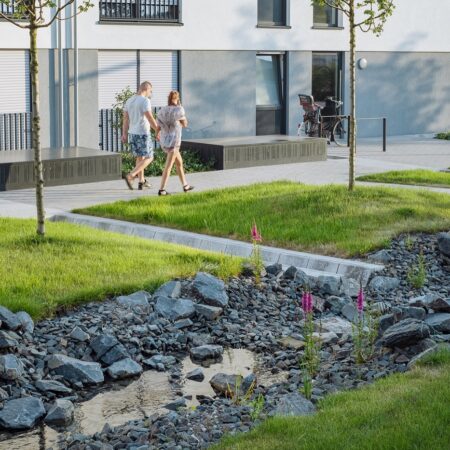 The project area Neuss Weckhoven is located close to the main city of North Rhine-Westfalia, Düsseldorf. The existing residential area at the Hülchrather Strasse is being upgraded by a new district development with single and multi-family houses and a central green area.

The green area with new public spaces offers a broad section of the population a new place to stay and communicate with a high level of design quality. The main idea of the design concept based of the central water axis. ‘Living in Neuss Weckhoven’ is a project which deliberately combined the contrast between the orthogonal design language of the architecture and the natural language of the landscape design. The gravel waterway is a key feature of the project which develops out of the drainage concept and should demonstrate a natural and sustainable aspect of the project. The drainage concept guides the rainwater of the roof areas through an open channel system in the new residential area and makes the water come alive which is especially nice for the children. The rainwater collecting channels create a water axis. In the most areas the channels are open. They are only covered in walking areas. Different sized stones, barrages and various aquatic plants stage the waterway. The water axis directs the rainwater into a water reservoir and from there the water trickles lets it seep into a larger basin. 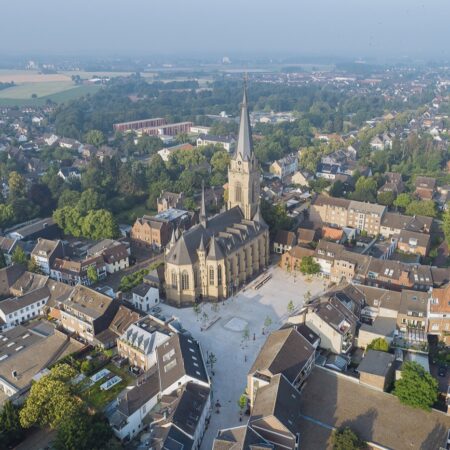 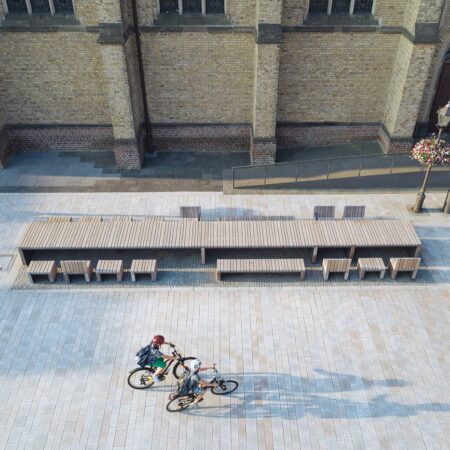 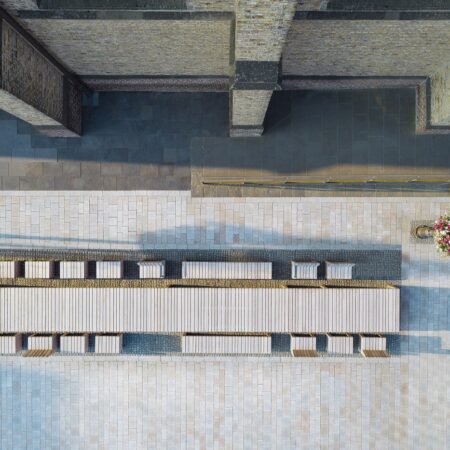 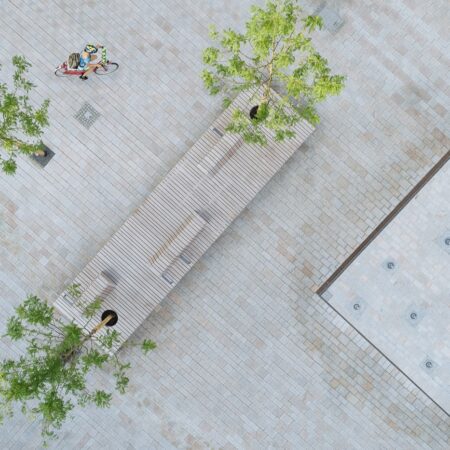 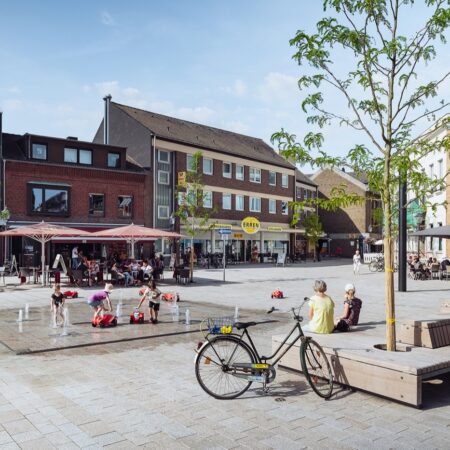 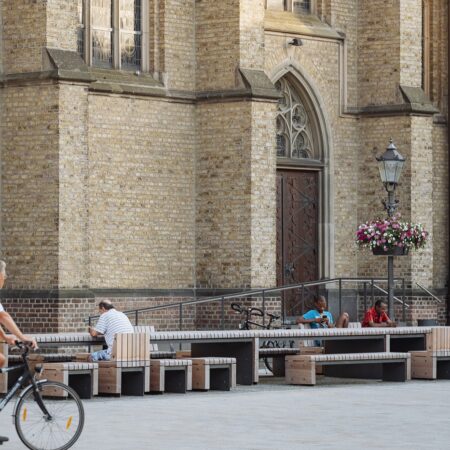 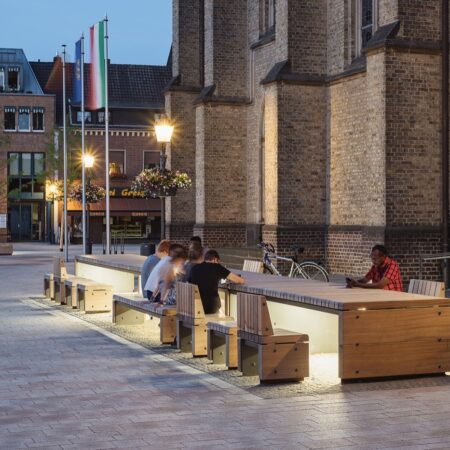 The city of Willich is located in North-Rhine Westfalia in Germany. The new living room of the citiy is clearly divided into rest, recreation and action areas. These areas are designed as inlays in a homogenous urban ground of natural stone slabs. They maintain the continuity of the urban space and link them to the surrounding paths. The design goal of the city’s new living room is to create an inviting and distinctive atmosphere, achieved through simple, high-quality design. Generational offers and accessibility are just as much a fundamental idea of planning as flexible usability for example for the weekly market, the heritage festival or other events. The fittings and the furniture were designed especially for the new market place. To strengthen the quality of stay, a meeting place is created in form of a long table along the church. A generously dimensioned table stretches over 12 meters and invites to communicate. In the south area, a fountain field is created which can be observed from the seating areas but also invites you to experience the water feature. Tree plantings are planting as groups of trees in the form of Gleditsia triacanthos ‘Skyline’. The visitors can sit in the shadow underneath the trees and enjoy the atmosphere. The illumination of the plaza takes place with the existing lighting which is mainly reinstalled on the walkways along the buildings. The main features of the square like the seats underneath the trees, the long table and the water feature are indirect illuminated. 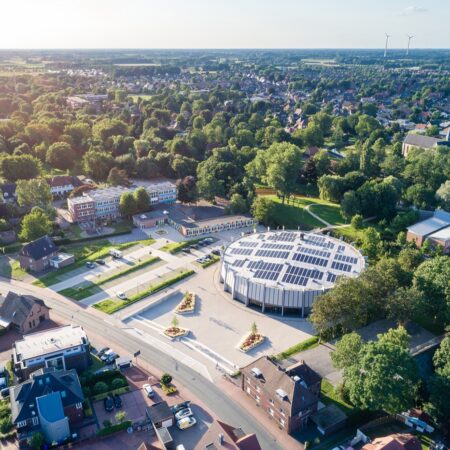 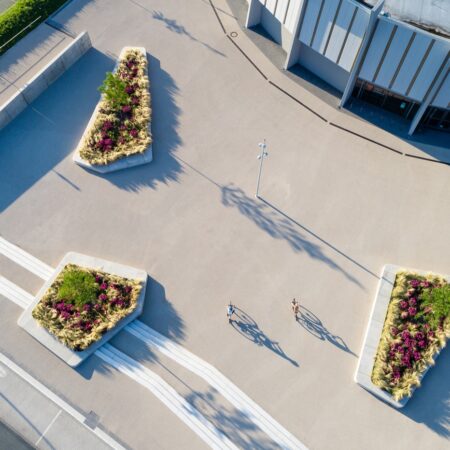 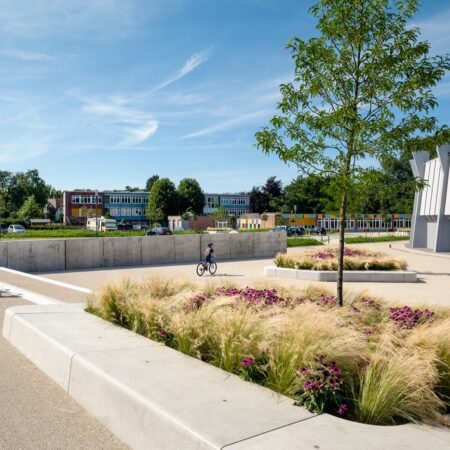 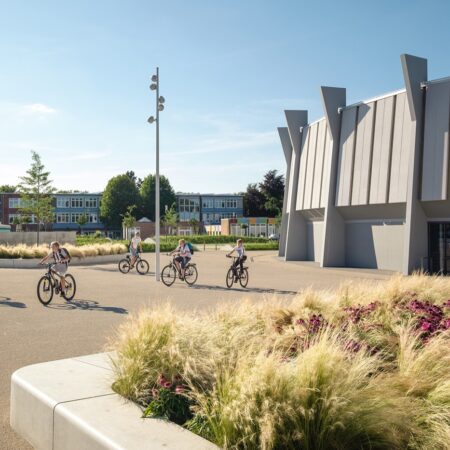 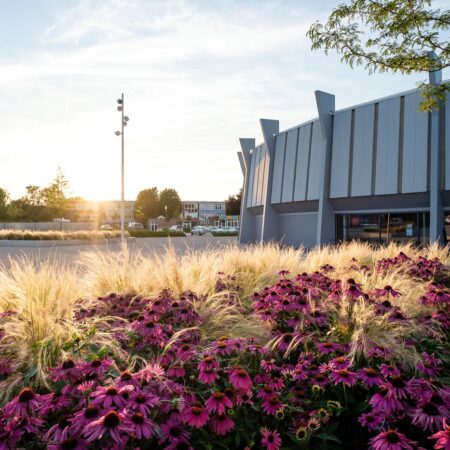 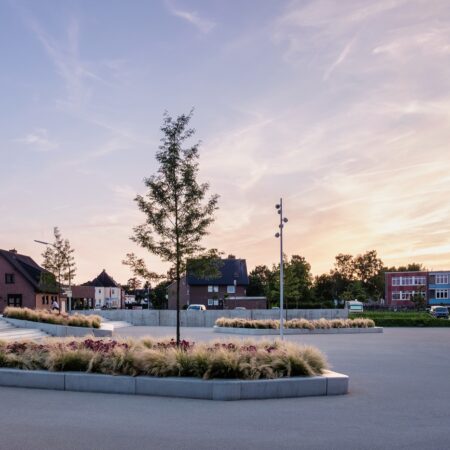 Concept – The city of Vreden is located in the northwest of North-Rhine Westfalia. The special character of the city Vreden comes from its scenic location next to the river Berkel. The Berkel itself effects Vreden also in a negative way because it appears as a barrier that separates the centre from the southern districts. The proposed concept works with the idea of enhance the cultural axis of the city and extend it with green infrastructure. Through this an attractive connection between north and south is linking the neighbouring districts. Like a pearl necklace, bigger and smaller attractions are put in a line and interpret the Berkel on different ways. The prologue for this jewel is the city entrance South in Vreden.

City entrance south – The area around the Hamalandhall has been completely restructured. The main idea is that as a city entrance the area has to combine many different requests. To create a modern but functional space, the idea of car parking is integrated into the concept for an urban place. A ramp is installed next to the stairs to keep the surface reachable for everybody. These areas are not accessible for vehicles, so that a place only for pedestrians is developed, which works as a public open space and invites people to spend time there. The city entrance is marked through a quiet and smoothly covering, which creates a friendly and light plaza that is linked to the public ways and the car parking. Even the lighting concept is balanced to the design. The discreet lights dive the whole area into an atmospherically mood. The new city entrance turns to become a new landmark of Vreden.

The regional Finance Office of Münster 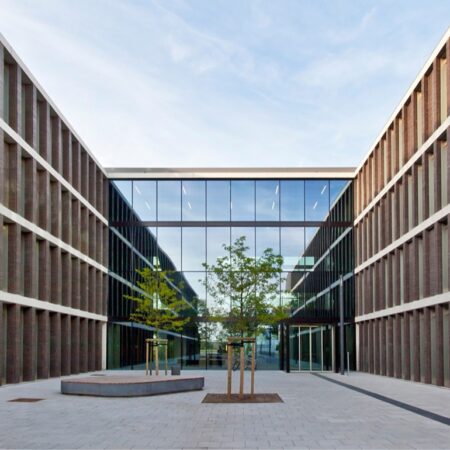 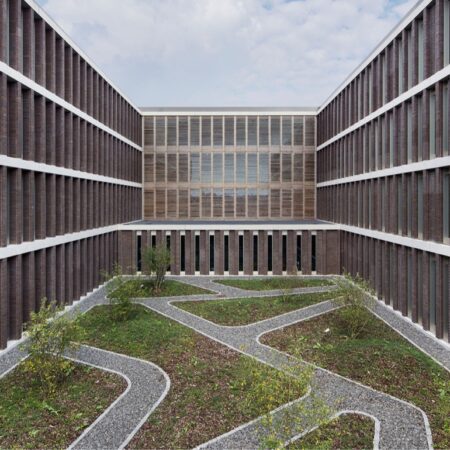 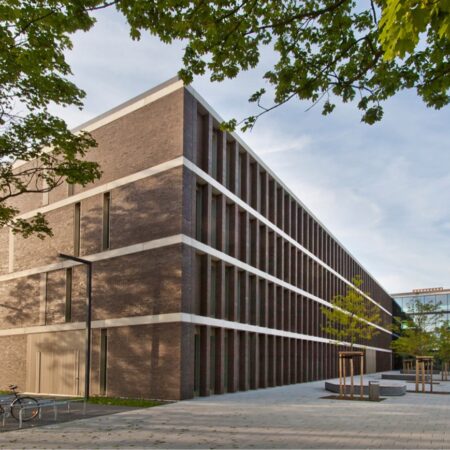 The city of Münster and the project area is located in the western of North-Rhine-Westfalia, Germany. The main idea for creating a new multifunctional open space for the regional finance office in Münster is on one hand based on positive contribution to the quality of the stay and on the other hand on improved needs for employees and visitors.

Therefore the open space is divided in three sections that differ in appearance and character, but in total offer a calm and clear atmosphere. By adopting the design options the intensity of the design varies and all visitors and staff members are influenced by the atmosphere. Following the orthogonal geometry of the building, an amply axis is established directly next to a parking area and creates a modern and plain entrance. Inside of the building the courtyards are designed as extensive areas that create restrained contrast to the straightforwardness of the building through a polygonal design language. The formation of three different places with various characters surrender out of the mixed materials which are chosen. Although the inner courtyards differ, they all create a calm situation that functions as a buffer between the adjoining offices. All in all this functional and bureaucratic property is shaped by a modern and clear design that follows the functional conditions but forms them into a modern arrangement. 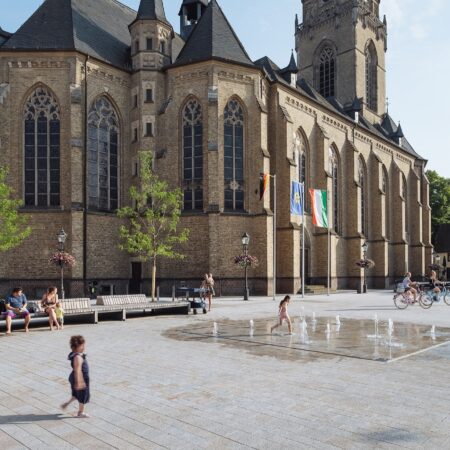 Market place Willich – The new living room of the city