Like many New England municipalities impacted by the decline in manufacturing, Lawrence, Massachusetts has been active in redefining itself as part of a more diverse, service-oriented economy, one that requires close partnerships between the City, its institutions, individual businesses, and private property owners. In 2010, the City of Lawrence and MassDevelopment began studying strategies to revitalize the west side of downtown. The short-term planning solutions identified by the study focused on ways of improving downtown access to buildings, parking, and streetscapes, as it sought to change public perception of the downtown City center as undesirable. The Lawrence Alley Connector Project was born of this study, creating productive partnerships with area leaders, and articulating the shared goal of helping to make meaningful connections between individuals and their City.

One major institution that is playing an important role in shaping the downtown area is Northern Essex Community College (NECC). In 2014, NECC’s $27 million El-Hefni Center opened, replacing an under-used, dilapidated parking garage. As part of this development, NECC and the City worked together to secure a $900,000 grant from MassWorks to clean-up the area surrounding the building and find ways of providing access to the downtown City center. The alleyway and an access “connector” space behind the El-Hefni Center had been neglected for years—trash had accumulated in heaps; dumpsters routinely overflowed; buildings were canvases for graffiti; broken glass and building debris was everywhere; and weeds and volunteer trees had taken root in the deteriorating pavement. The Lawrence Alley Connector Project was funded as part of the MassWorks grant, with the overarching goal of reclaiming this neglected, under-utilized alley and connector space as the primary pedestrian corridor between NECC’s new campus and the adjacent downtown neighborhoods.

Working with an extremely modest budget our design approach was to foster a strong, graphic identity that marks the alley as a distinctive, vibrant place central to both College and neighborhood. Thermoplastic, a commonplace crosswalk material embedded into asphalt, is used in a unique and creative way to heighten the visual interest of the groundplane by creating a custom pattern using a standard ashlar stamp. The thoughtful deployment of this prosaic material allowed the cost per square foot to remain low; and, because it will see little to no vehicular traffic, it will have an impact far longer than in its standard application. Large, eye-catching murals, completed in partnership with local non-profit Groundwork Lawrence, brighten and frame the space with liveliness and color. In time, four elm trees will create a canopy over the connector space. Permeable paving was added to over 20% of the connector along with over 1,800 sq. ft. of structural soil to help minimize stormwater runoff and support the new trees. A central, composite decking “carpet” caps the soil volume, and multi-purpose benches wrap around the trees and help activate the site for pedestrian use. Fifteen LED lighting elements improve pedestrian safety and discourage vandalism. All of these elements foster connectivity into and around the various buildings of the community college and its neighborhood. 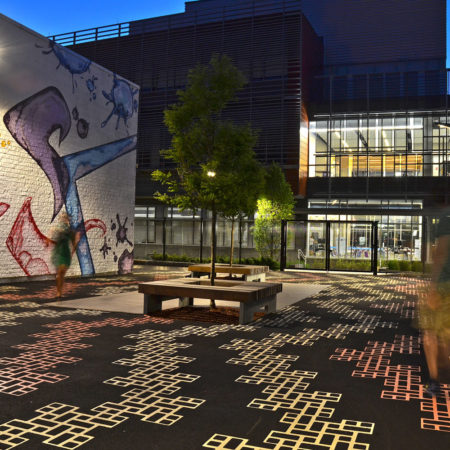 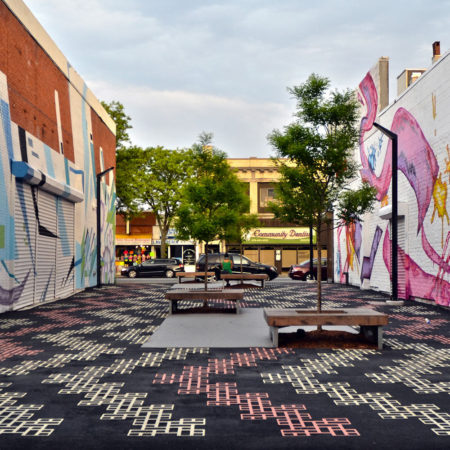 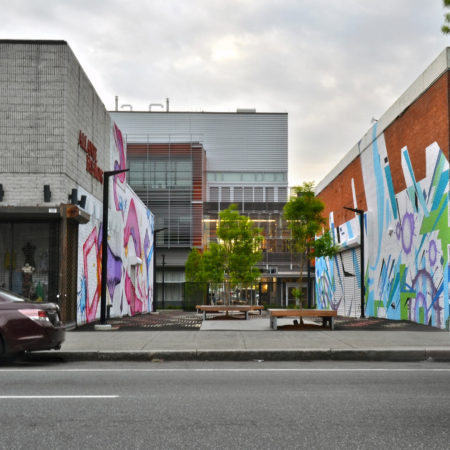 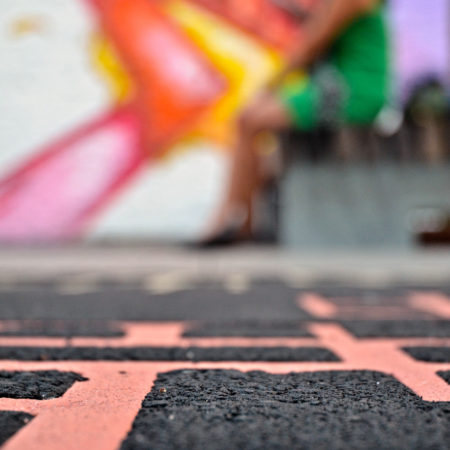 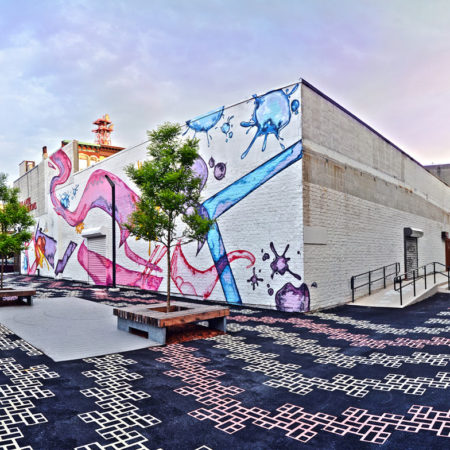 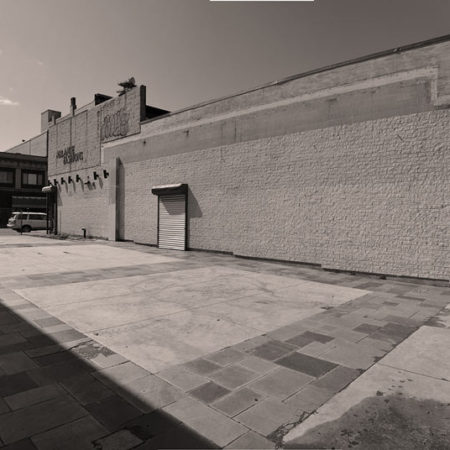 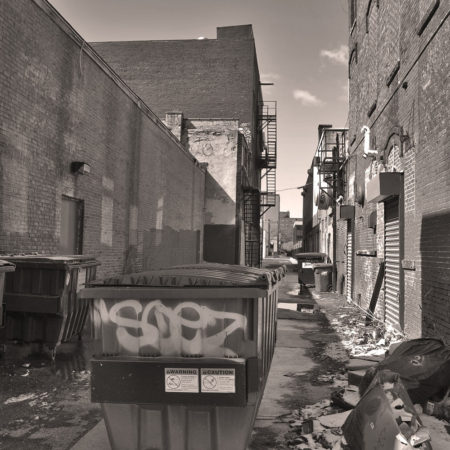 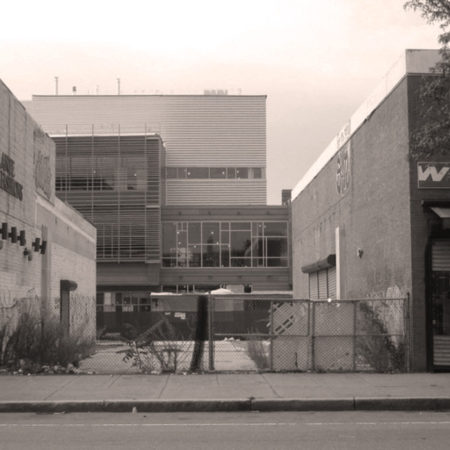 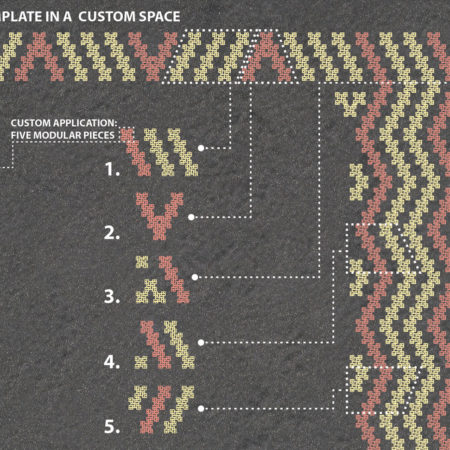 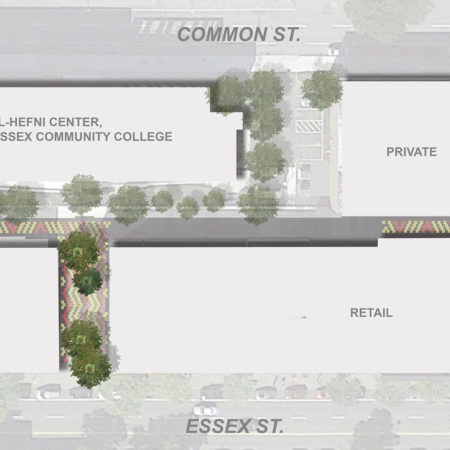 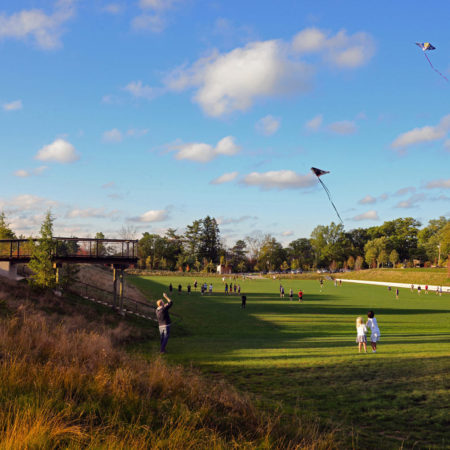 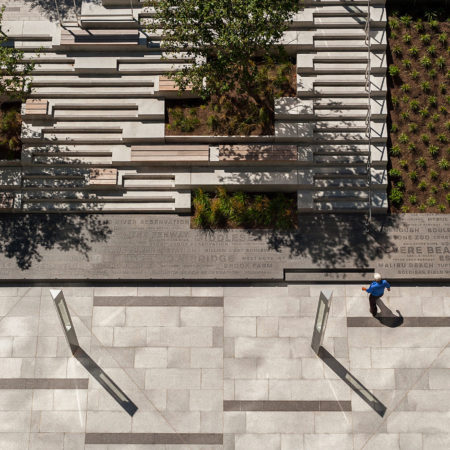