Given to The City of Houston in 1941, Levy Park was once home to baseball diamonds, a dog park and picturesque live oak trees. Over time, the park became under-utilized, suffering from a lack of visibility, access and activation. As the only green space in Houston’s Upper Kirby District, the park needed to be rejuvenated to rebuild patronage. OJB Landscape Architecture transformed this underdeveloped space into a world-class, amenity-rich park, positioning Levy Park as a destination in Houston. 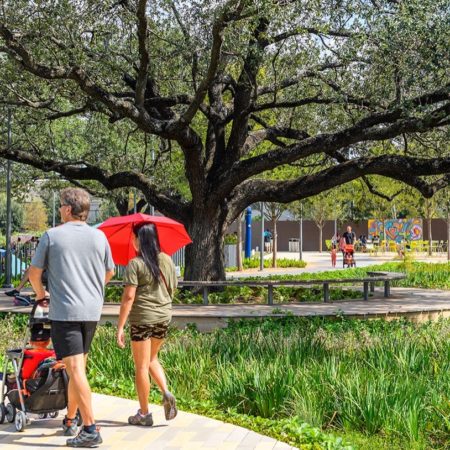 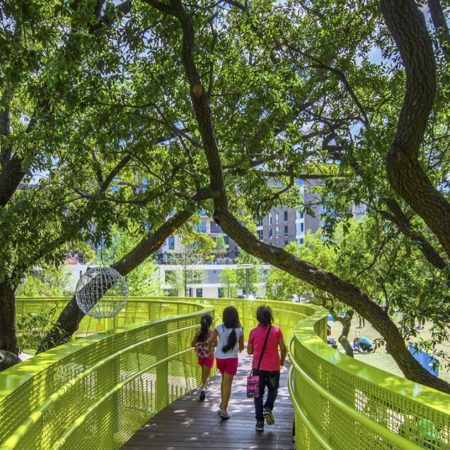 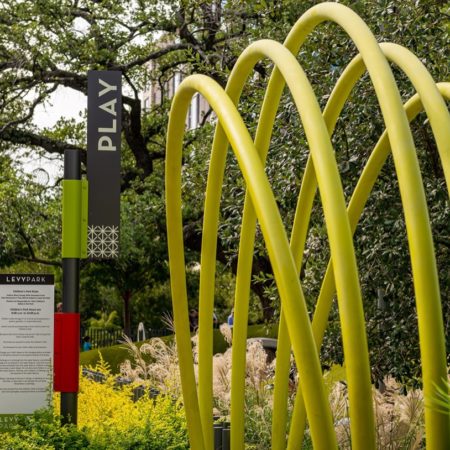 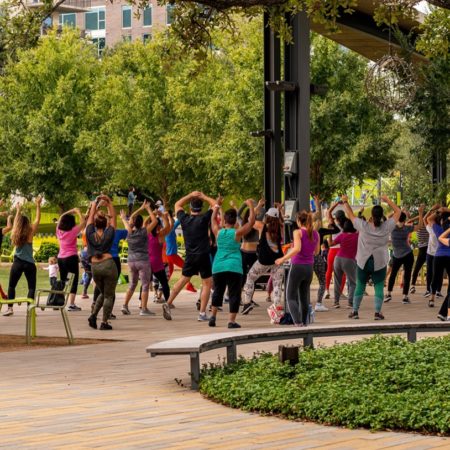 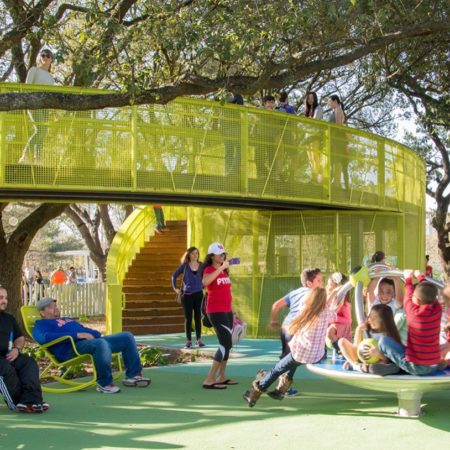 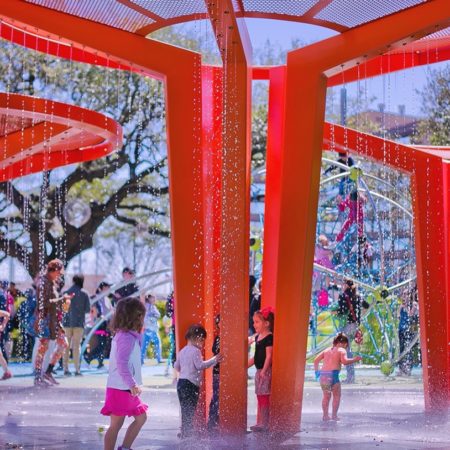 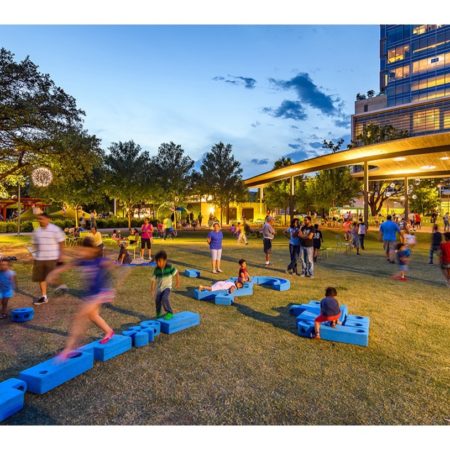 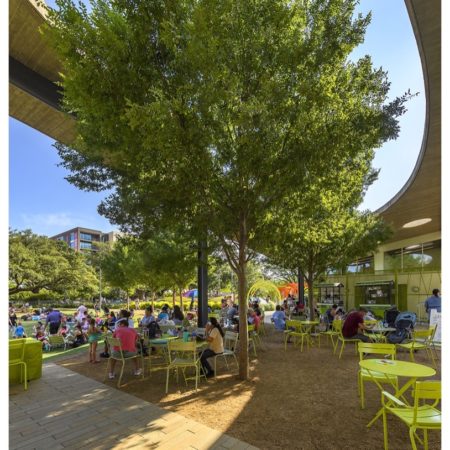 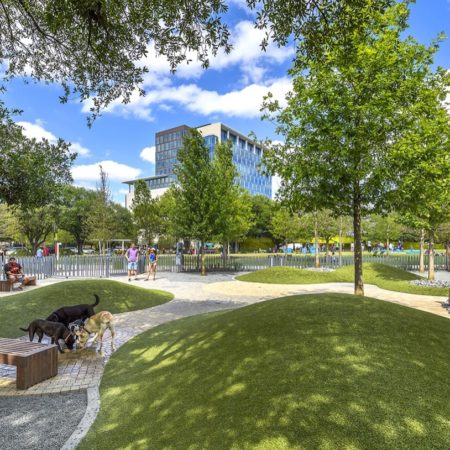 Before renovation efforts, Levy Park was hidden on three sides by private properties, all of which faced away from the park, leaving only one street as access. Circulation, visibility and access issues were solved through a land swap of building parcels between the client and the City of Houston, and OJB’s reconfiguration allowing for increased activation and on-street parking opportunities. It became clear that Levy Park needed not only the facilities to support community-driven programming, but also active, vibrant edges engaged in complementary uses. The client partnered with a developer to activate the park perimeter with a smart mix of uses that would enhance public programming and amenities, including the thoughtful integration of Class-A office space, restaurants and a residential tower. This public private partnership generates the funds needed to maintain and program the park for the next 99 years.

Park usage and spatial relationships were thoughtfully considered while designing and coordinating the various spaces. The design was planned around the centrally located, one of a kind, children’s garden featuring imaginative interactive sculptures, playful fountains and a 150-foot-long ADA accessible treehouse platform that spans across 50-70-year-old live oaks. Children engage in rock wall climbing, sliding down the seven-foot-wide slide, crawling through the LED-lit tunnels and playing in the three-tiered interactive water feature that mimics a Houston rain shower. Strategically, the dog parks were placed away from the restaurant and children’s garden, while the restaurant and beer garden are near the community garden and event lawn.

OJB recognized the importance of connectivity and accessibility from the park’s edges to the interior spaces, which was paramount to the park’s redesign. The streetscape was renovated to invite and strengthen pedestrian and vehicular connectivity to the park, while the promenade, lined with trees, food trucks, game carts and moveable furniture, circles the park and creates synergy and connection among the various spaces.

The multi-use spaces support a daily roster of day and night-time activities, including educational opportunities, concerts, fitness classes, performance series, movie nights and story hours. Levy Park has become a place people of all ages can come to experience community, play, eat, recharge, be inspired and escape the hectic nature of urban life. The event lawn offers flexible seating and plenty of space to set down a blanket for a picnic, participate in physical activity or view a performance in the multi-purpose performance pavilion. An activity lawn on the west side provides an active open green space and is anchored by a miniature golf green and gaming area, where park-goers can play checkers, foosball or ping pong underneath a shade arbor. The park’s reading room provides a more passive park experience for those visitors who are seeking softer participation.

Climate resiliency was a huge consideration in the park design. Houston is notorious for its heat, humidity and frequent flooding. To mitigate these challenges, the redesign incorporates sustainable elements into the park’s design, including a rain garden and community garden, which are both attractive on-site amenities and harvest and reuse stormwater. The park also features 3.3 acres of permeable surface, and drought-tolerant and pest-resistant plantings were selected, as were locally sourced pavers. Another environmental improvement is the sequestration of CO2 through 138 newly planted native trees, which also intercept a combined 80,000 gallons of stormwater runoff. The relocation of the site’s legacy live oaks provide shade to the formerly treeless east side of the park and reduce temperatures by an estimated 10 degrees.
The redevelopment of Levy Park has spurred neighborhood growth and development, attracting residents and businesses and providing them with an enhanced public space that contributes to the revitalization and quality of life in the area. Since the park’s re-opening, attendance has catapulted from pre-renovation numbers of 75 visitors per week to ranges between 5,000 and 10,000 visitors per week. 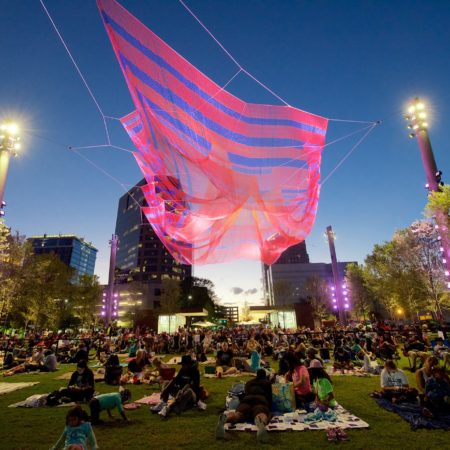 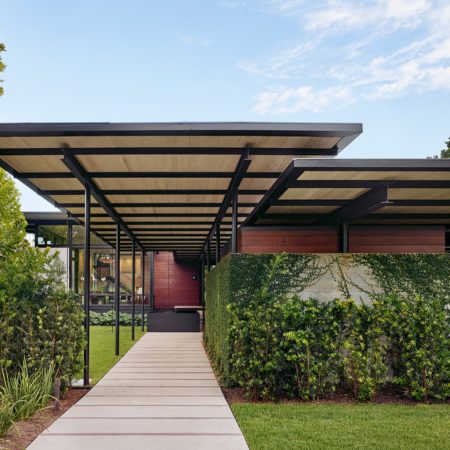