The Women’s House as a meeting place

In the Moroccan village of Ouled Merzoug, the community offered a piece of land to the women’s association. In order to gather and empower their women members, the recently founded association desired a Women’s House in the village, a built space to meet, work and learn.

Subtle landmark, central on the mental map of the villagers

The given land is a bit away from main street. Here a small promontory hill stands next to a dry gully. It doesn’t rain often, but when it does, the flushing water leaves clear scars in the gully: traces of gravel and sand that moved between the numerous rocks. A harsh wind over the hill is an almost constant feature. The larger picture is an arid landscape: barren, granite mountain slopes overlook the ‘Dades’ river with a lush green palm grove along it.

These aspects of the landscape were decisive for determining the exact position and the architecture of the building. We took into account the topography on both micro and larger scale. As we positioned it, the long and low granite stone building perfectly merges with the slope of the hill. Although it’s far from a monumental structure, the walls at each end stand out and face both sides of the village. Exactly this is recognized as a major quality of the building by the villagers.

Furthermore, we analysed the walking trail patterns of the villagers.The public character of the Women’s House is emphasised by the position of the building on the crossing of two informal paths. The main path leads directly into a public court at the heart of the building. 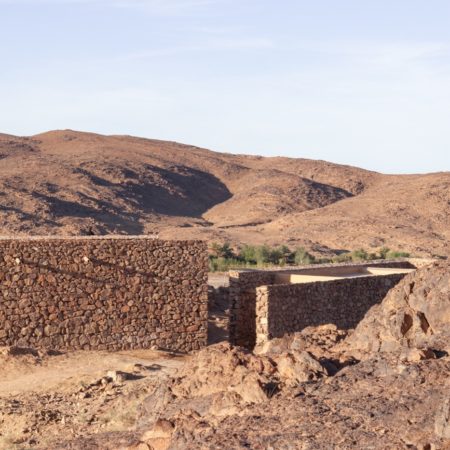 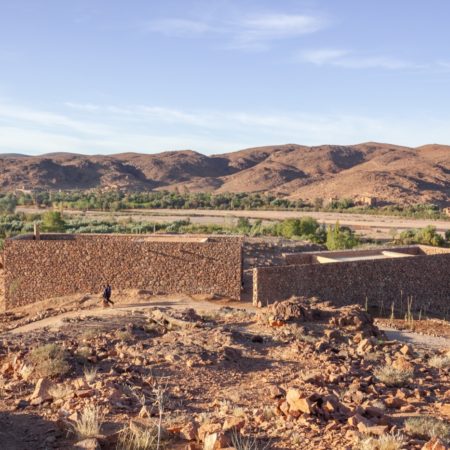 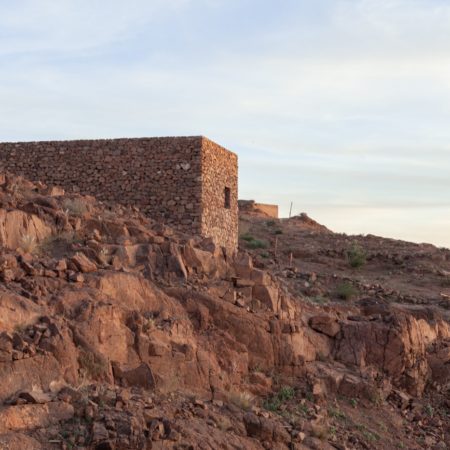 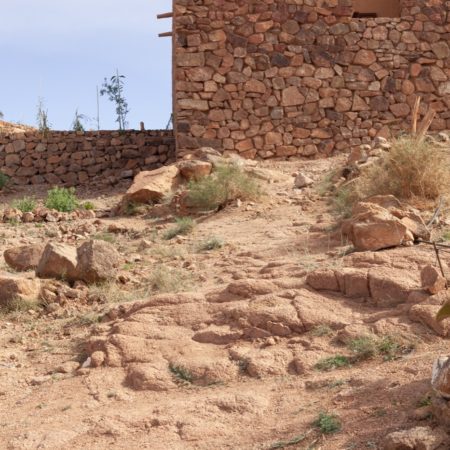 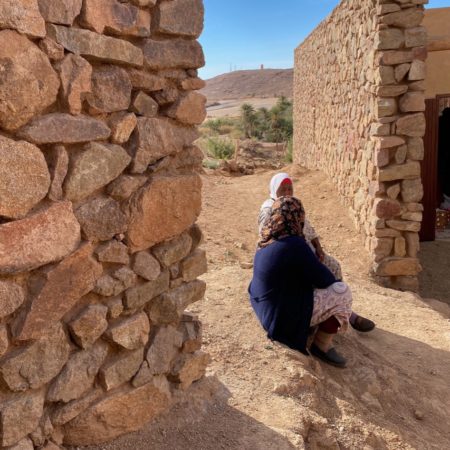 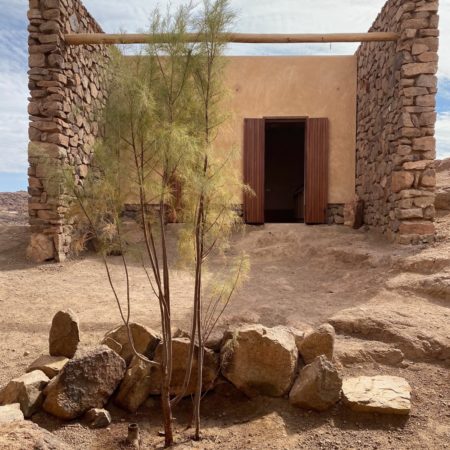 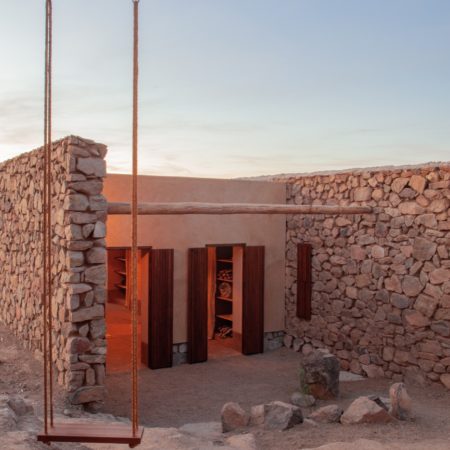 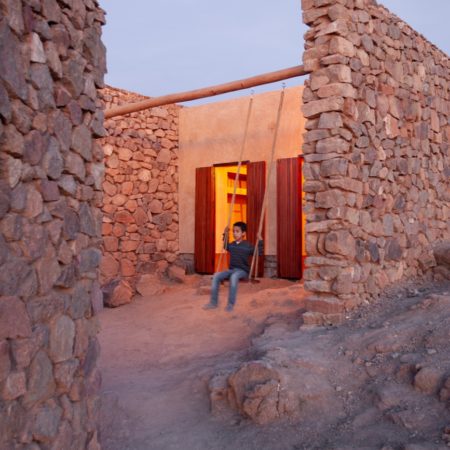 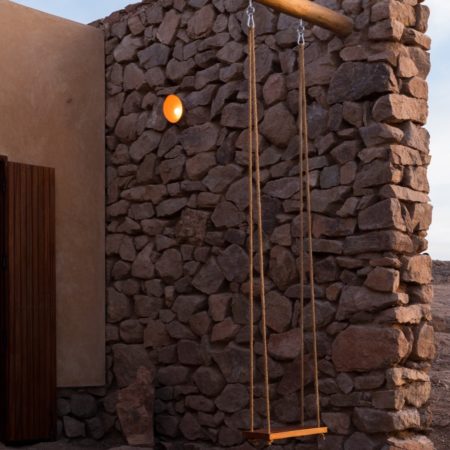 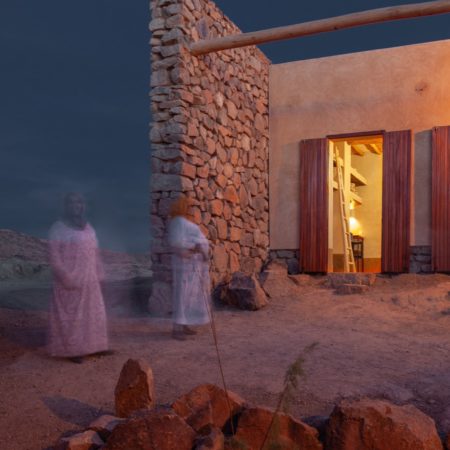 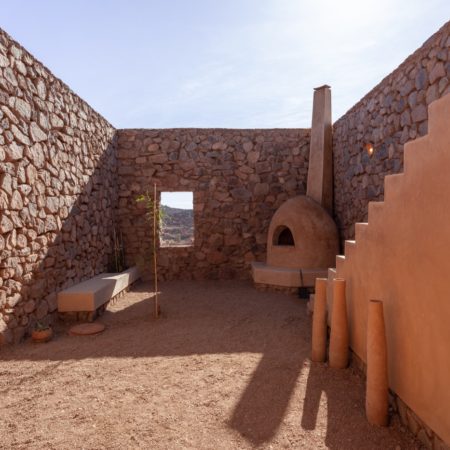 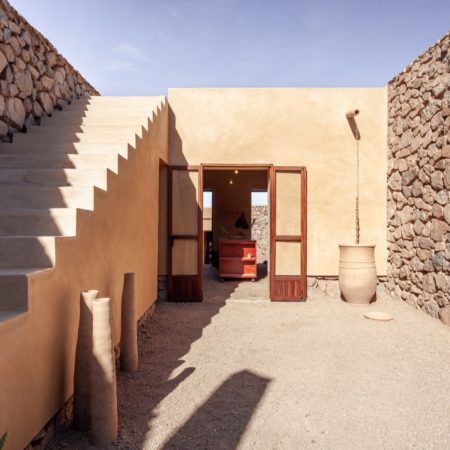 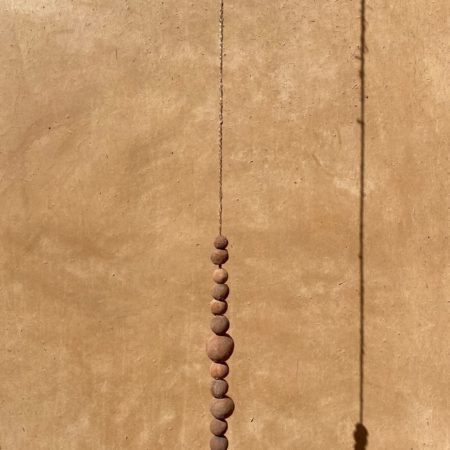 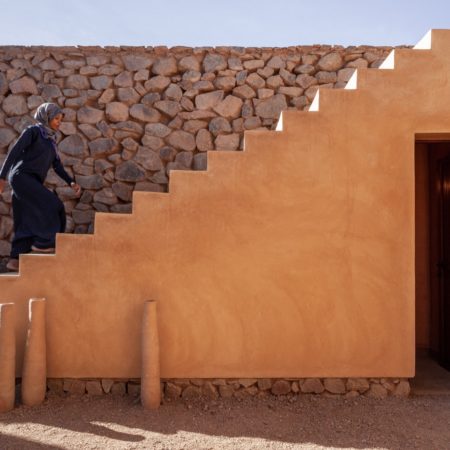 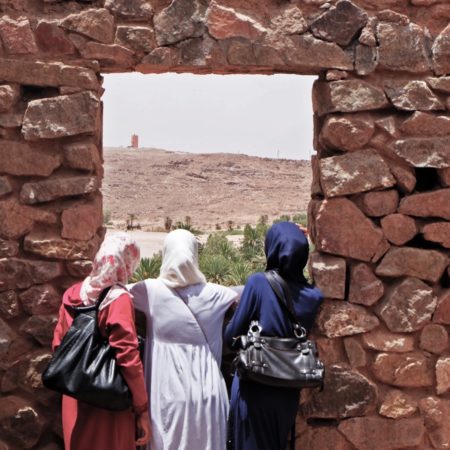 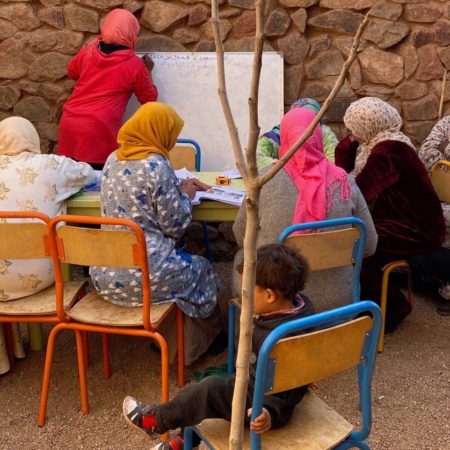 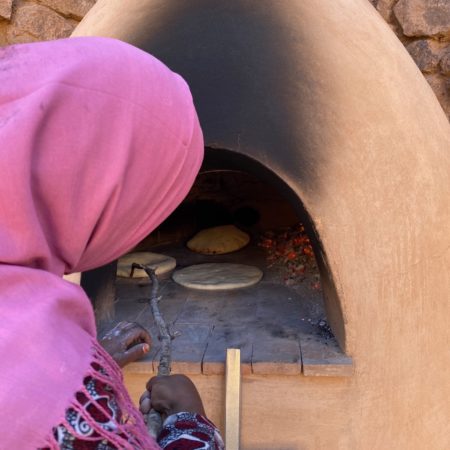 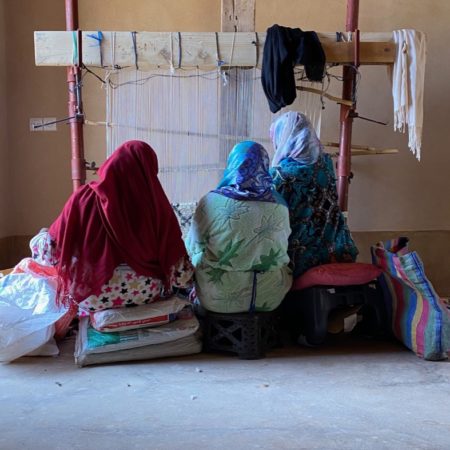 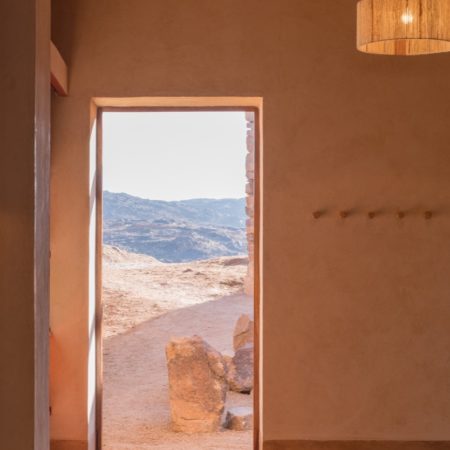 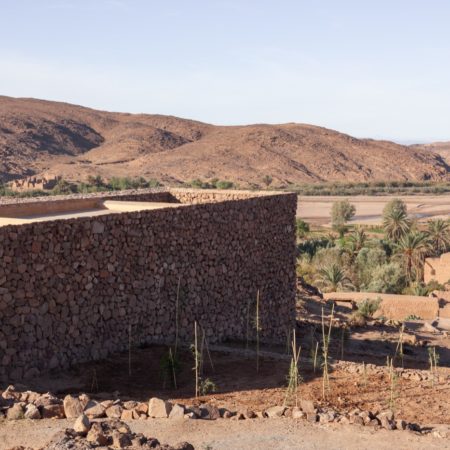 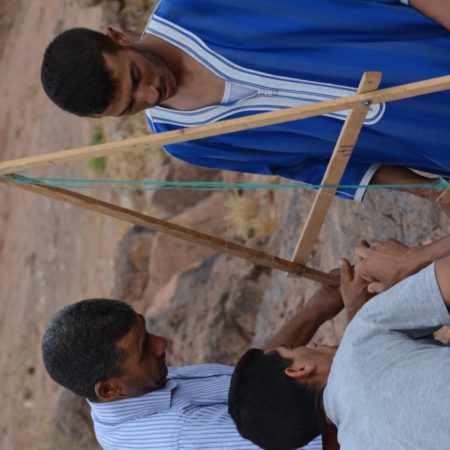 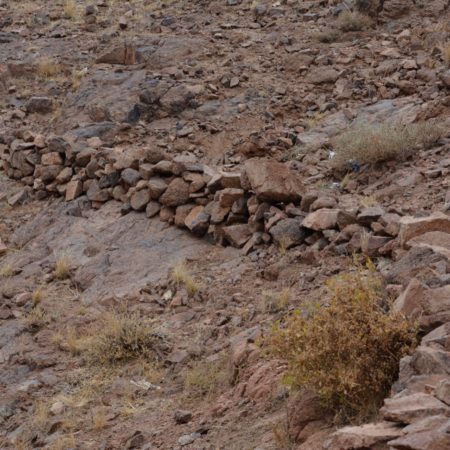 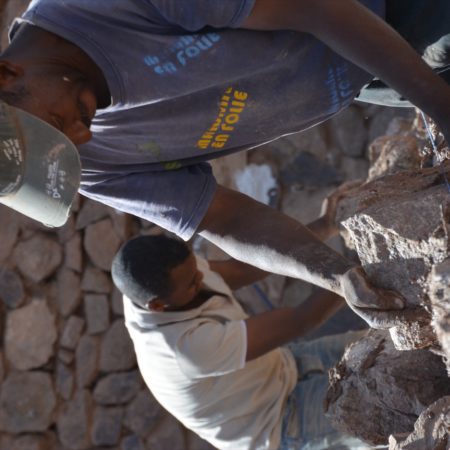 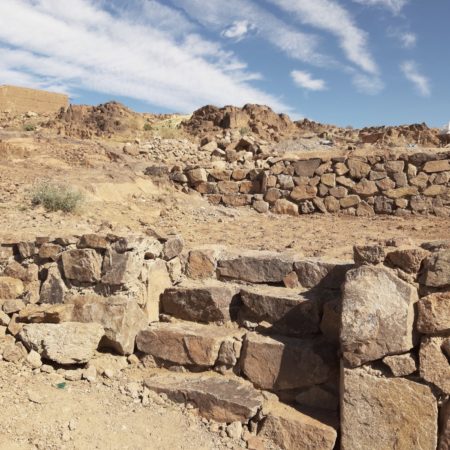 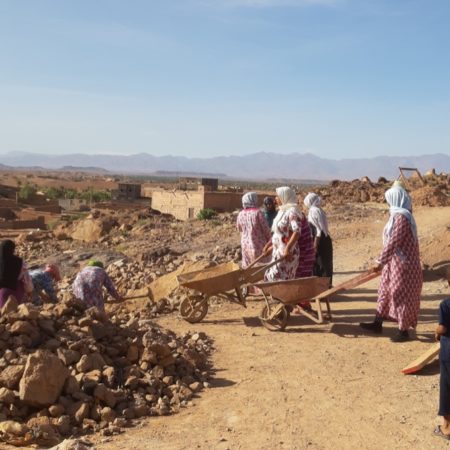 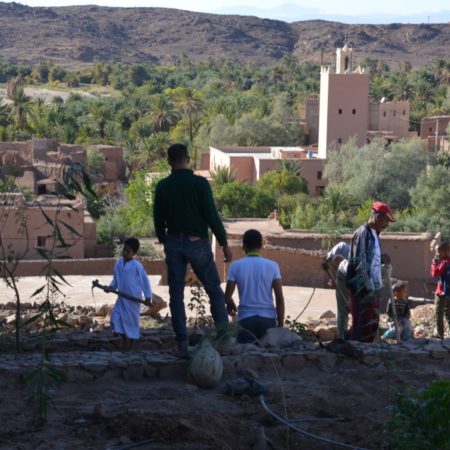 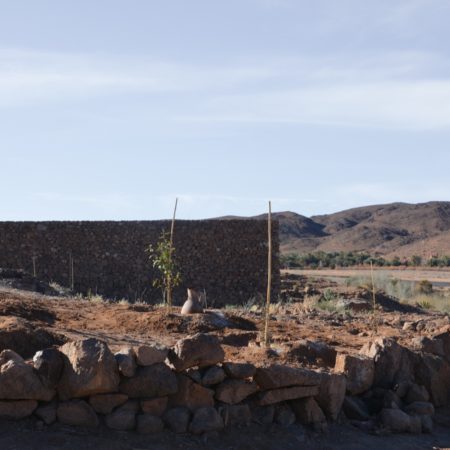 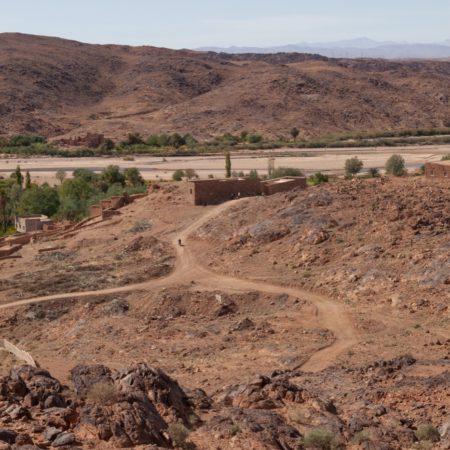 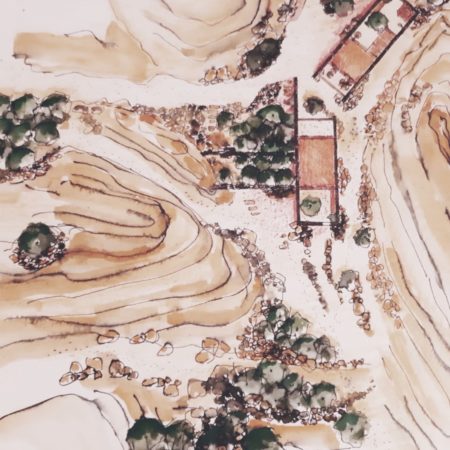 Public court as the heart of the building

This central meeting space connects the two halves of the building: the atelier and the kitchen pavilion. In the court, we placed a number of humble elements for various uses. There are sitting stairs for drinking tea in front of the kitchen and boulders as play elements for children. A Tamarix tree provides shade and creates an intimate zone.

Both the atelier and the kitchen have an enclosed garden. The high granite walls provide a feeling of comfort, much appreciated in Moroccan rural society. The single square opening in the end wall in each garden grabs a panoramic view over the village.

The garden of the kitchen pavilion is a place for production, togetherness, sharing knowledge and inviting people. In its bare soil, three earthen elements were carefully placed to enhance the program of the garden: an earthen staircase which leads to the roof terrace, a bench with a rambler plant and a large cob-oven, that was built in collaboration with the women. As their ochre colour contrasts with the granite walls and the grit soil, the garden becomes a stylised open-air room. Ceramic art objects, produced by the local potter, decorate this room.

The garden of the atelier is a more intimate place to repose in between work and course sessions. A large bench stands in the shade of the high walls and of the leafy fig tree.

The use of water was carefully taken into consideration. The water of the sinks is filtered and the water from the roof is captured by a ceramic barrel. All the overflows lead to the soil underneath the trees.

A pleasant forested garden will accompany the Women’s House and raise the quality of the site.

We observed that public squares are not common in rural villages in Morocco. The garden brings greenery and shade to the hill site and aims to be a new public space for the village of Ouled Merzoug.

In the gully, on the formerly barren rocks, two retention walls each hold a soil terrace. They slow down the speed of the runoff water during rainstorms. Fine soil particles will be deposited on the vegetated terraces. Some fertile soil was inoculated in the terraces. Pioneer trees and shrubs were planted. The species are adapted to the natural arid conditions. They will grow into a small forest patch and support the Women’s House as an enjoyable environment for all villagers.

The goal for the reforestation is double:
Bring biodiversity, landscape quality and local shady conditions to the hillside;
Mitigate losses associated with strong rainwater runoff: erosion, destruction of paths and roads, fast peak discharge of water toward the river causing catastrophic flooding downstream.

The community ensured that this place was created. The team of construction workers built the two terrace walls. After working hours, the women came with wheelbarrows, buckets, a lot of enthusiasm and their singing voices to help spread out fertile soil on the terraces. They planted the trees as a group activity. It is exactly this participatory approach that makes this place so special.
Furthermore, the people can apply the dry stack walls with terraced soil as a new concept to other gullies in the village.

Eco-sustainable construction as an option for rural communities

This eco-sustainable project on a moderate budget, was entirely built by hand, crafting materials available on site. By the simple process of picking up stones and reordering them into walls, terraces and steps, a pure landscape was created. It is a sustainable design that managed to merge architecture and landscape.