The Lycée Français de Singapour is an institution financed by the French government for Singapore’s French community and educates a wide age group of children from kindergarten to baccalaureate. The project is a new primary school extension to the existing secondary school on an adjacent site. The landscape design re-interprets the rich depth of French culture, such that its spirit is re-expressed and transformed into a new Asian-French identity for tropical Singapore.

Inspired by the four heritage-value mature Rain Trees found on the site – three in a row along the canal and one at the site boundary – the landscape design integrates the trees in a manner that is significant as well as eloquent. These trees are an important part of the estate – for sociologic, psychologic, ethical and historical reasons – and now they play a major role in the development and the urban ecology of the site. Collectively, the trees furnish a truly remarkable visual landmark that gives rich depth and perspective to the end product. 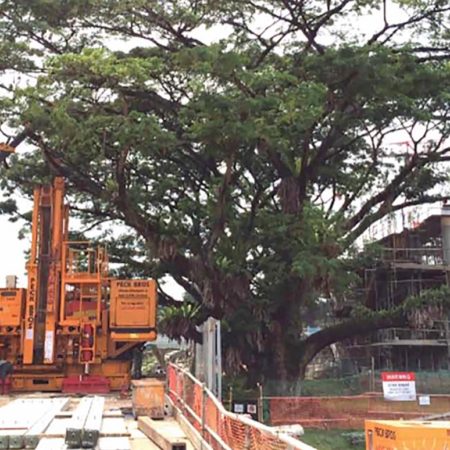 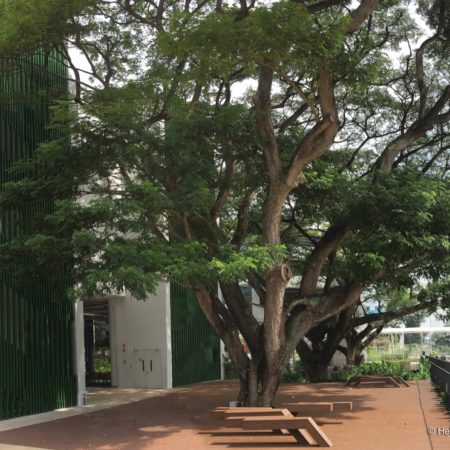 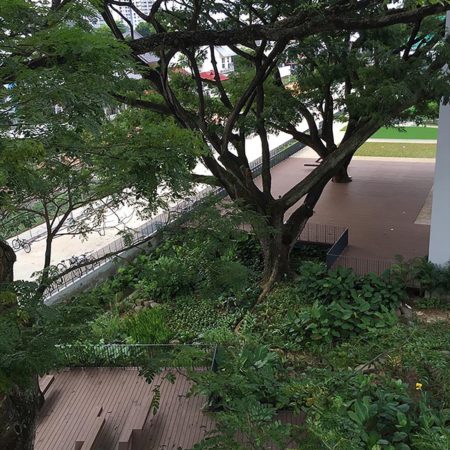 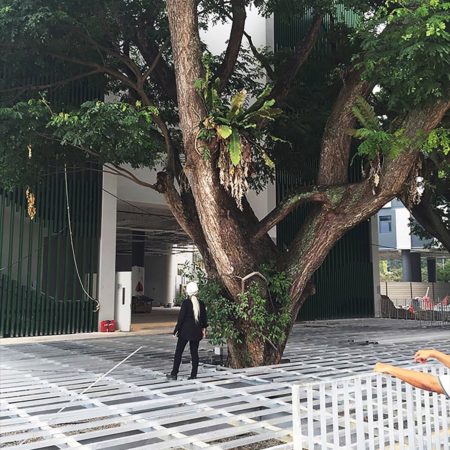 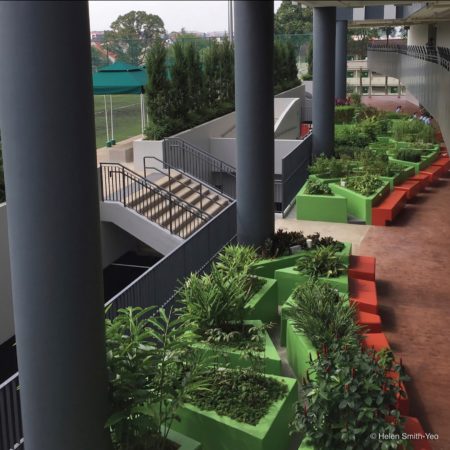 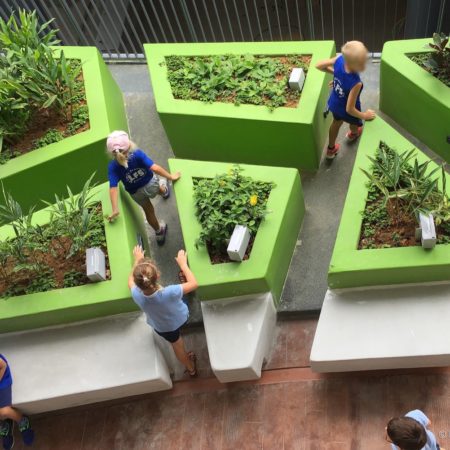 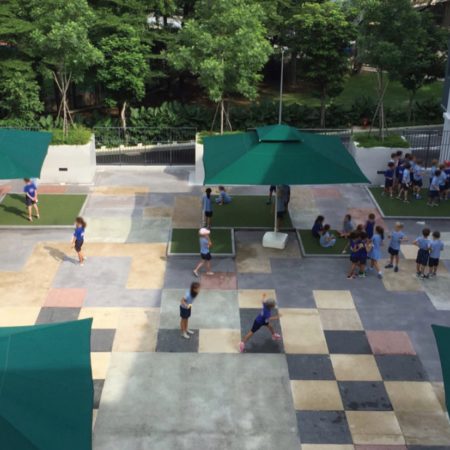 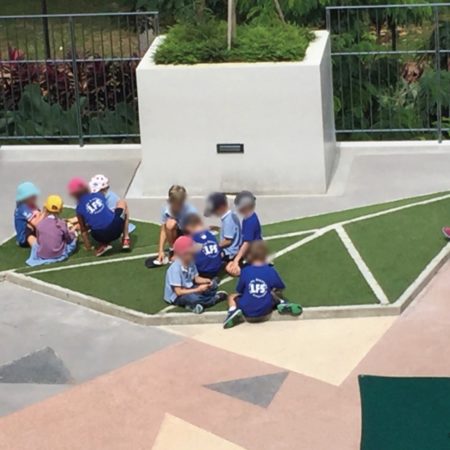 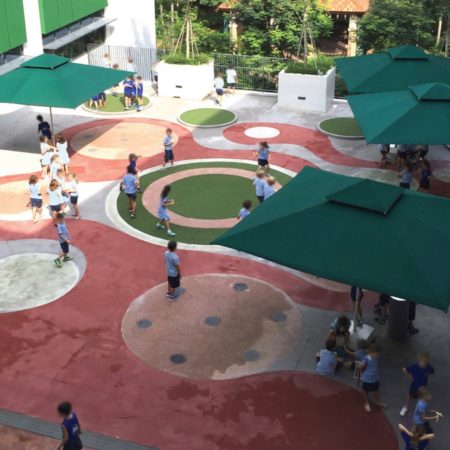 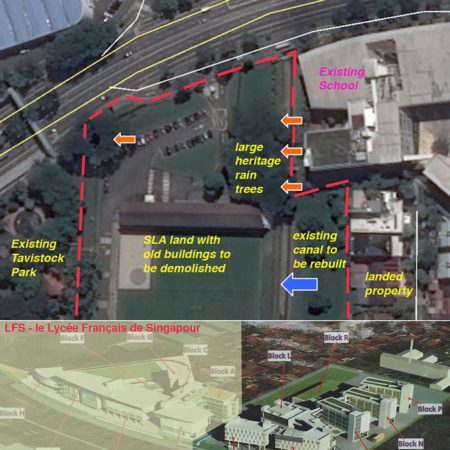 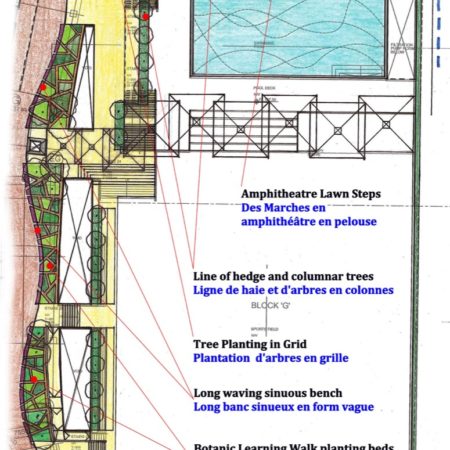 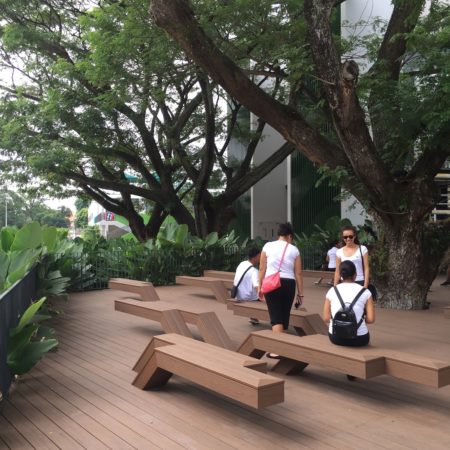 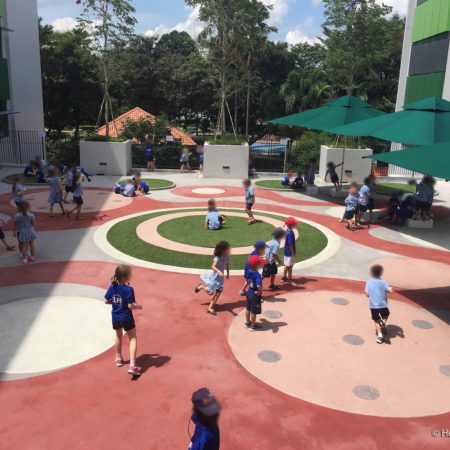 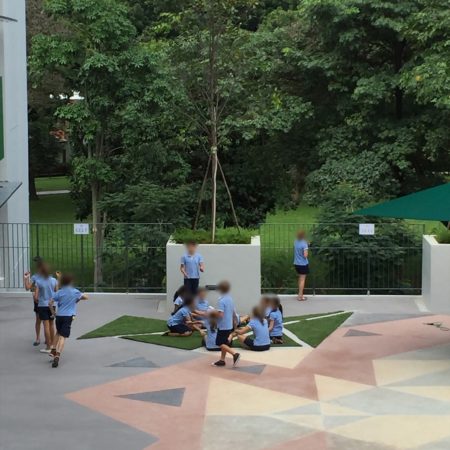 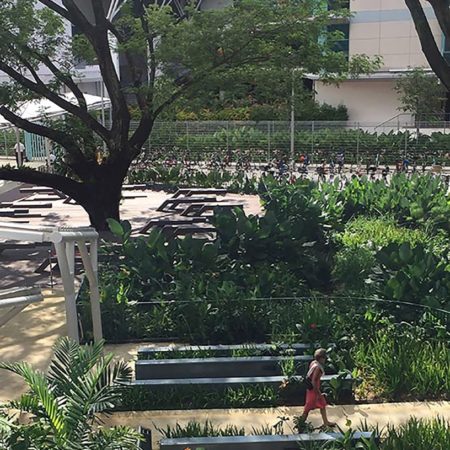 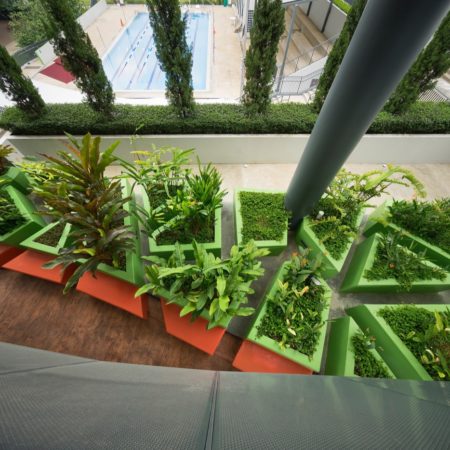 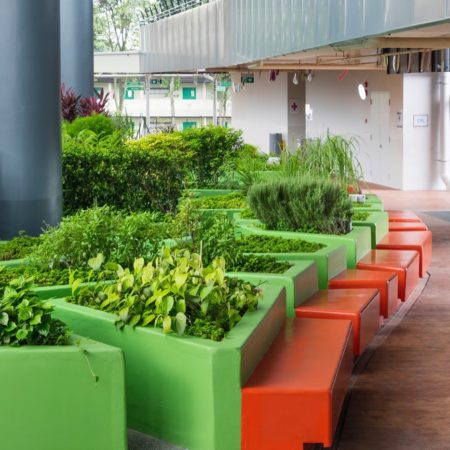 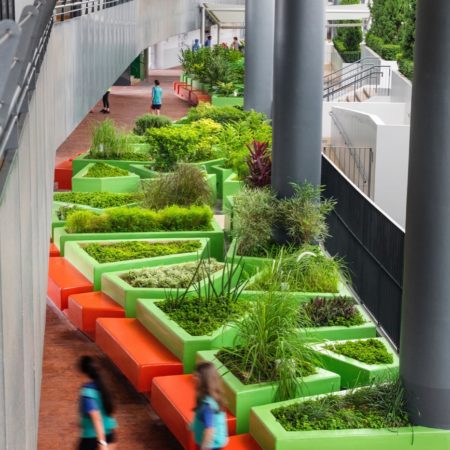 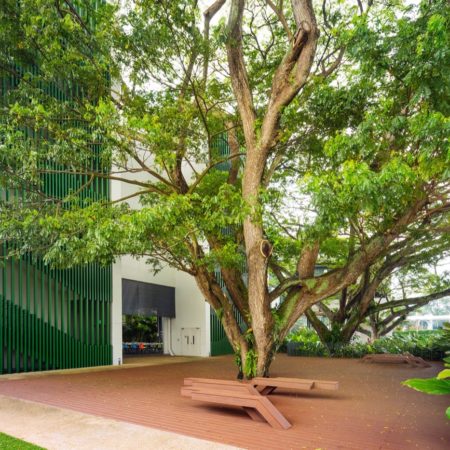 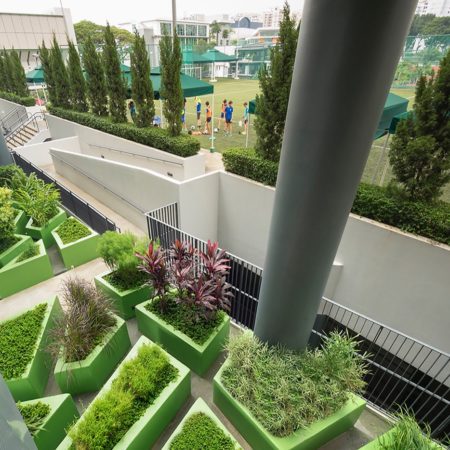 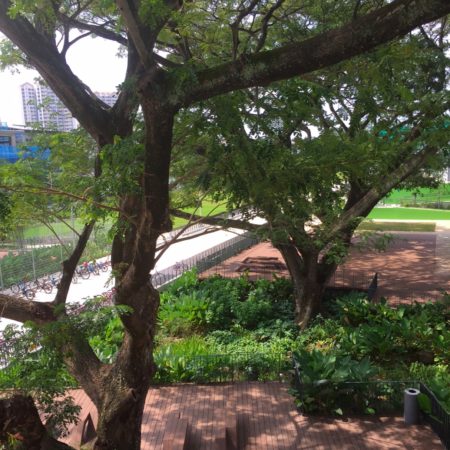 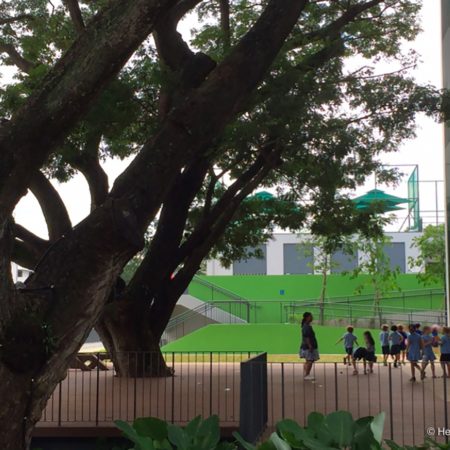 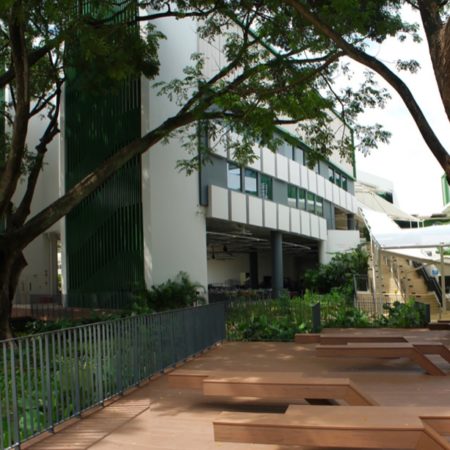 Upon entry, the immediacy and omnipresence of these preserved Rain Trees  starting at the Welcome Garden, and leading to the Woodland Garden, anchors one’s vision. Nestled within its shade, is a poetic interpretation of place that opens the spirit to an enchanted memory of a different world. The Welcome Garden with wood deck and benches invites a moment of repose and contemplation into the wild greenery of the Woodland Garden acting like an outdoor “living room”. The Woodland Garden is a rain garden that during heavy rain collects, holds and finally channels water into the re-built canal, with timber terraces suspended over rocks and boulders that are mixed-in with indigenous plants and broad-leaved lush planting to create an image of “Savage Nature”. Here, Nature adds the mystery of un-prescribed learning where things are revealed in layers of discovery. Ultimately, the over-ridding challenge in the project was the successful preservation of the Rain Trees, sandwiched as they were between the reconstruction of the old canal and the construction of the buildings of the new school.

The canteen space opens out to the Woodland garden, and from this lushly naturalistic environment, the landscape transitions into a structured space called the Formal Garden. These are a series of rectangular lawns and linear hedges with punctuating columnar trees, creating a frontier along the Sports area, intentionally calling to mind the lines of clipped conical trees with parterres of traditional French gardens of old.

On another side of the sports facilities, built as a long timber-look terrace extension along the classroom blocks, is the Botanic Learning Walk designed based on French style “parterres” used in French formal garden design. This landscape re-interpretation becomes a series of strongly patterned concrete planting beds each with a different plant, grouped by plant families with tiny “kid-sized” aggregate pathways in-between, creating playful little mazes to engage the curiosity of these primary school children in order to instil awareness and appreciation of flora diversity.

The Botanic Walk, in the entirety of its length, faces 3 recreational open air play courts which alternates simultaneously with 3 class room blocks, and its edge is defined by a long and brightly coloured concrete bench that forms a sinuous wave in the landscape, but sliced in the same manner following the parterre planters. This wave reflects and forms a counter-wave to the curve of the walkway one level above, overlooking the Botanic parterres. The result is a natural area of casual repose and the bench encourages the teachers and the students to tarry a moment, facilitating informal and unplanned encounters.

The learning section of the development, has 3 open air play courts themed upon the three most basic and pure of geometric forms – that of the Square, the Circle and the Triangle – all used as a source of inspiration for the creation of a sequence of sculptural and playful experiences. Each play court contains concrete and wash-pebble motifs in 2-dimensions and in 3-dimensions, all related to its signature form – as raised artificial lawn planes, folded forms, mounds and depressions – designed to encourage the children to use their own imagination in play.

At LFS, education is nourished by design in the creation of an innovative landscape environment, with settings for learning, dialogue, play, celebration and reflection, underpinned by a cultural adaptation of the French Garden. 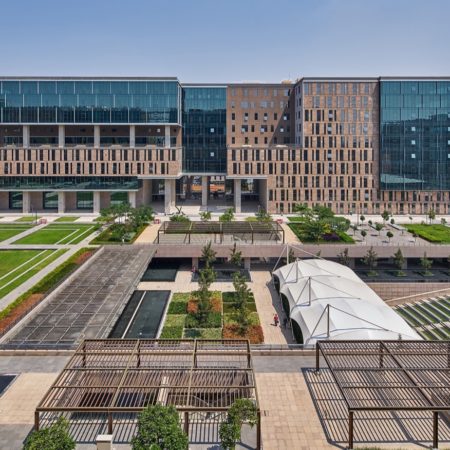 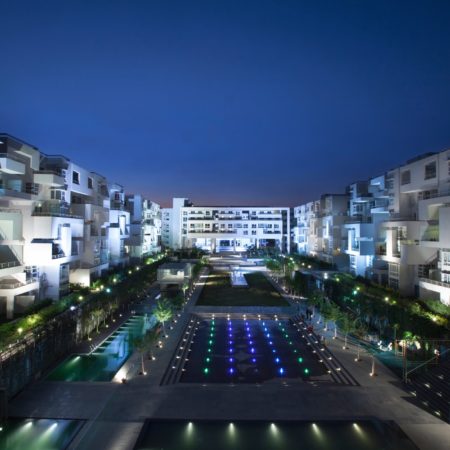 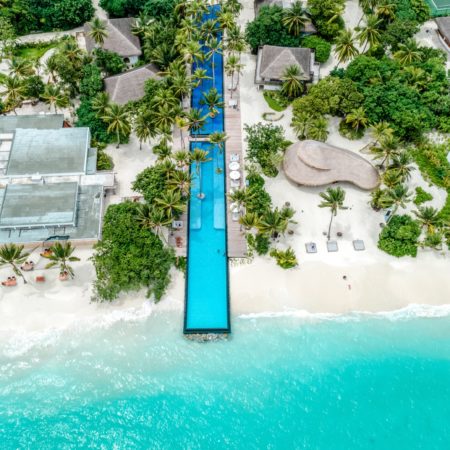 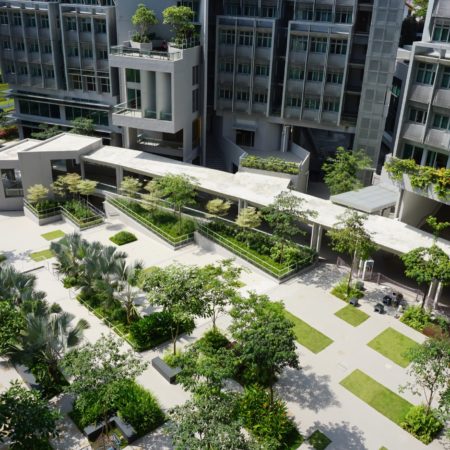 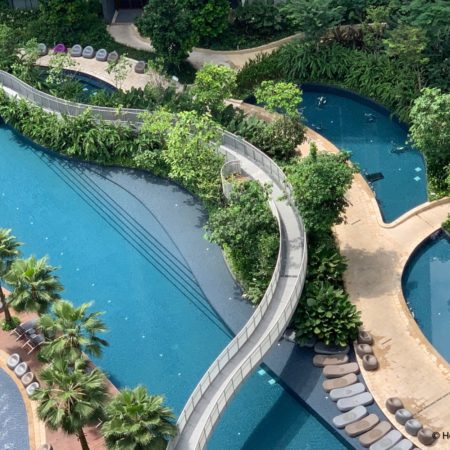 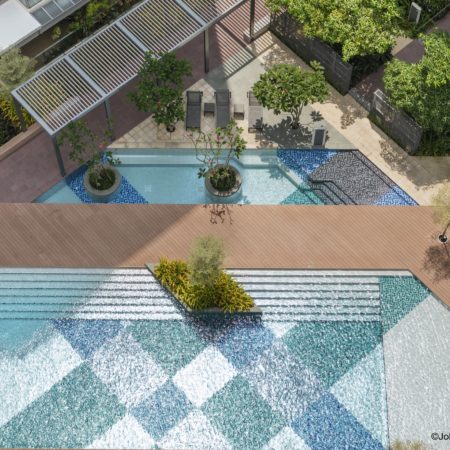