Where there are no hills, you build them. This is not a half pipe, not a ski jump, and it is not a luge course. This is ‘Manitobogganing’: a toboggan slide in the woods with two super-fast icy chutes at the bottom. In a northern city with long winters, short days, and little topography, the investment in accessible seasonal play in the public realm is becoming serious business. This is fun, low cost, free infrastructure in a city park and it’s designed for thrill-seekers of all ages and all abilities.

The Toboggan Slide at St. Vital Park is Winnipeg’s first universally-accessible toboggan structure. It represents the City’s commitment to barrier-free, social infrastructure. Completed in December of 2017, the project includes two toboggan slides, a lookout tower, a warming hut that doubles as a picnic shelter and a ramp that meanders through an existing forest canopy to a wheelchair-accessible toboggan launch and viewing deck. The slide is not designed for a wheelchair, but there is room to easily transfer to a toboggan on the launch. And, the ramp allows tobogganers to be pulled up to the top of the slides instead of taking the stairs. Billy Bridges, two-time paralympic medalist in sledge-hockey was one of the first visitors to use the Slide and he told us, “I haven’t been able to toboggan so many times in a row since I was six-years old. This thing changes my thinking about outdoor winter activities with my daughter.” The second, higher slide is accessed from the upper tower. Regionally inspired, the tower’s graphic of a knit sweater pattern takes its cue from a Mary Maxim sweater, a company whose roots trace back to Sifton, Manitoba in the early fifties.  Below the deck of the lower slide is the warming shelter, a cozy space with heaters that is painted an inviting and hearth-like red. Large pivot doors can be opened to create room for social gatherings like family picnics, or for younger children milling about in the snow playing tag while older siblings take a few more runs. The ramp’s durable steel structure is cantilevered and designed to avoid the removal of any trees from the existing urban forest canopy. The ramp is a hybrid of steel grate and wood deck that diversifies views and sounds when travelling up the ramp. The warming hut’s structure uses beams and columns reclaimed from an old picnic shelter on a nearby site. The structure is comprised of cantilevered galvanized steel frames on piles with wood infill.  Galvanized steel grate is used strategically for guards and floor panels at various locations where views occur.  Douglas fir boards make up the principle cladding at the warming shelter, ramp guards, and viewing decks.  The warming shelter is built from reclaimed beams and columns from a picnic shelter that once occupied a nearby site. The interior of the shelter is painted a bright and warm red.  The tower and upper viewing deck is framed by galvanized steel panels that were laser cut following a Mary Maxim sweater pattern.  The vertical portions of the slides and launch use a high-density plastic liner and the chutes at the bottom of the slides are built up from snow and ice maintained daily by Park staff.  In good Prairie form, straw bales at the end of each chute stop tobogganers from sliding into the forest. 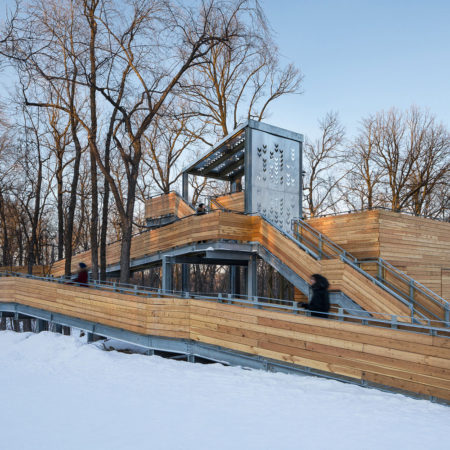 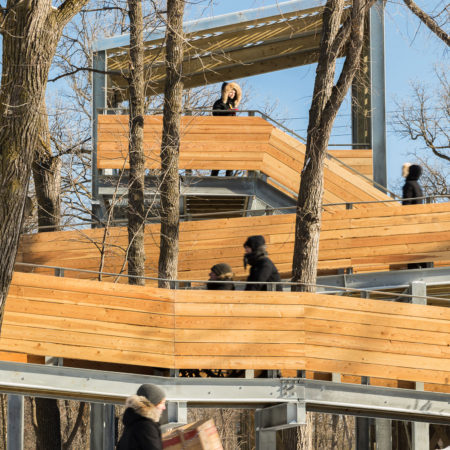 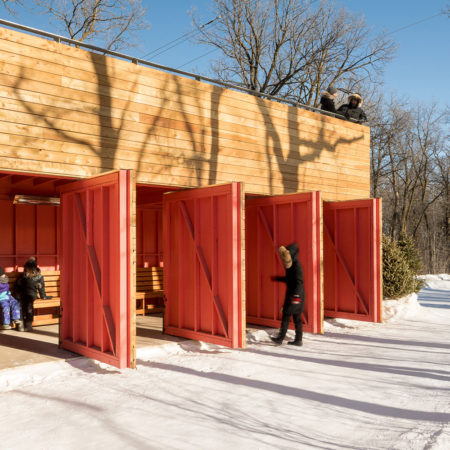 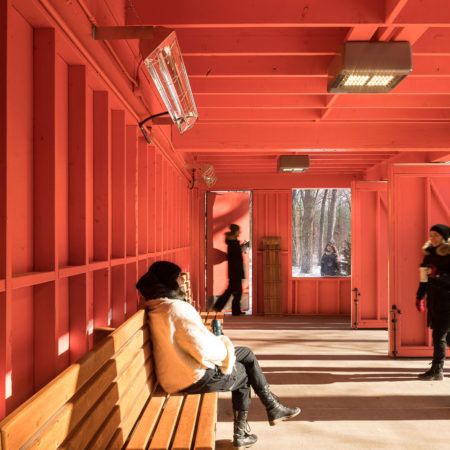 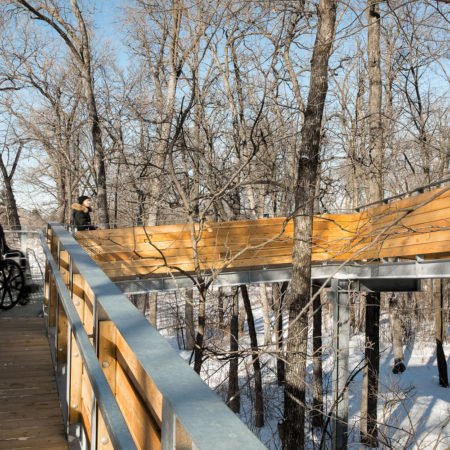 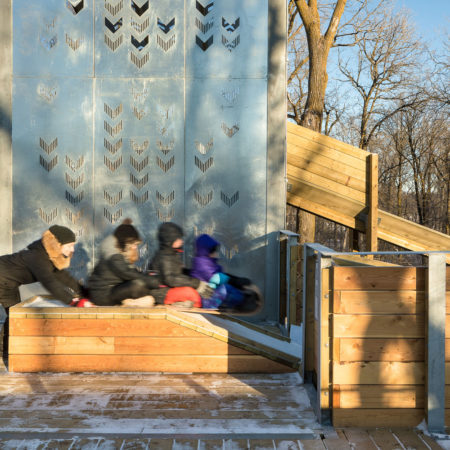 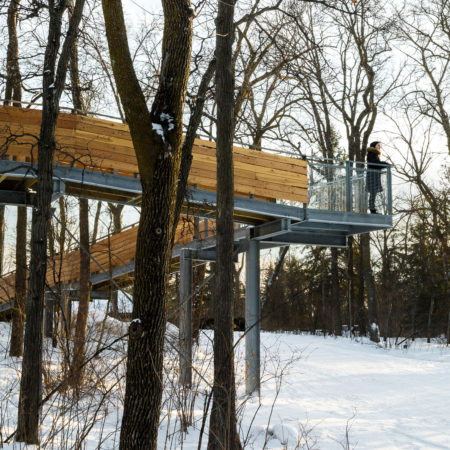 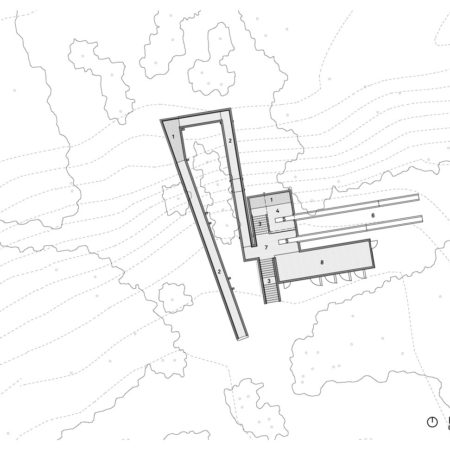 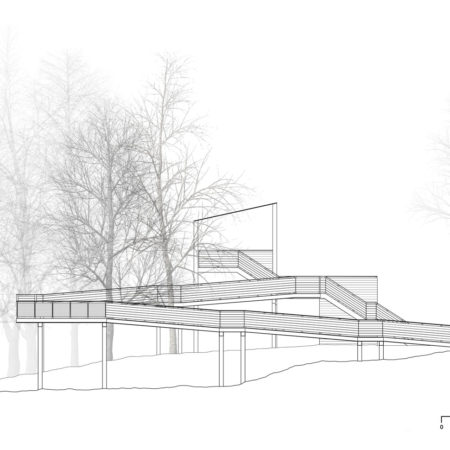 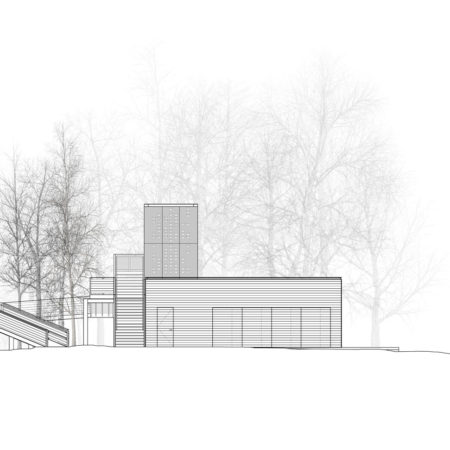 PUBLIC CITY ARCHITECTURE INC is an integrated landscape architecture and architecture studio that places high value in the design, quality, and experience of social infrastructure as it forms the public realm. In our studio, the principal disciplines work without division. When approached as a hybrid discipline, landscape architecture and architecture form the basis of a truly integrated urban design practice. As designers of the public realm, PUBLIC CITY pursues design as social engagement, as place-making, and as an art of experience that makes place a conduit between individuals and their community. 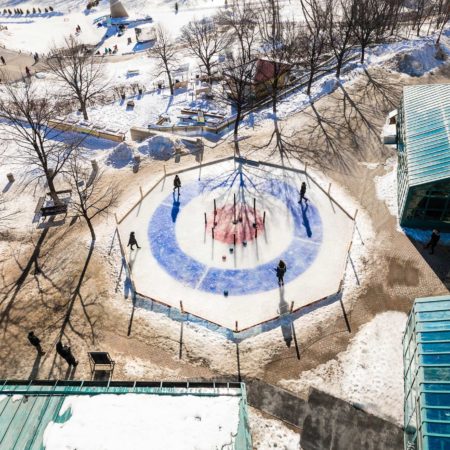