Māra Hūpara is a first-of-its-kind playspace that offers children a unique and imaginative experience, while also reinforcing the wider values of Te Auaunga stream restoration project. With kindergarten, primary and intermediate schools all within proximity, the reserves are used frequently by children and young adults to get to and from schools, and most weekends for diversions. The design team met with local primary schools to identify opportunities for the schools to participate. Students were invited to think about ‘nature’ and the ‘outdoors’ and how they like to play in these environments. The children’s responses to nature included the joy of climbing trees, stepping on stones in the river, adventuring, exploring, and building huts. This was encouraging for an urban population of children. The design team specifically set out to deliver play spaces that spoke to people about wild places and natural environments, and create opportunities for exploration and daring using nature as a guide. 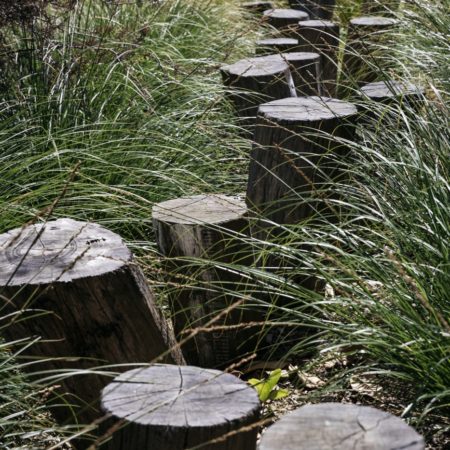 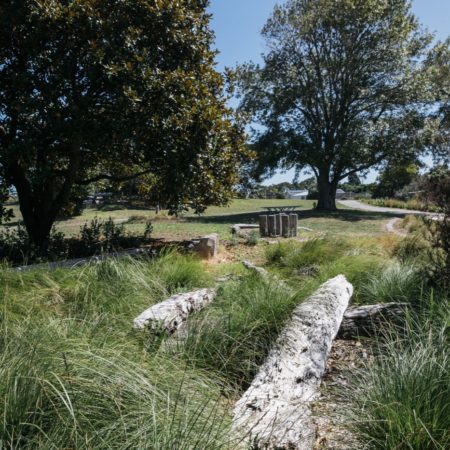 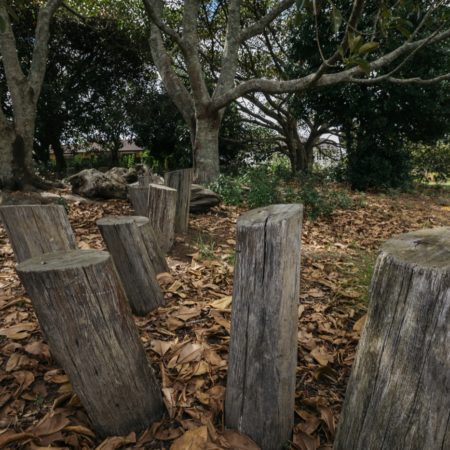 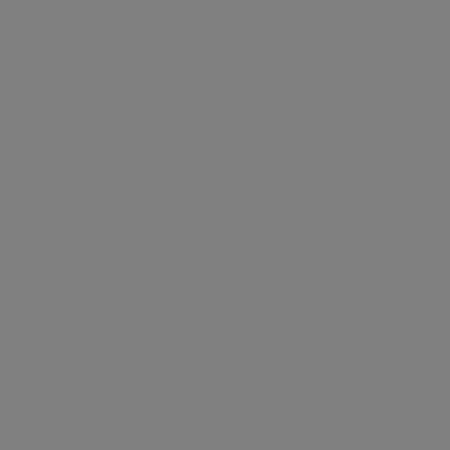 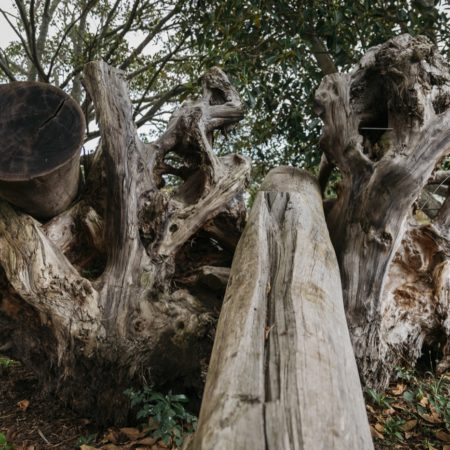 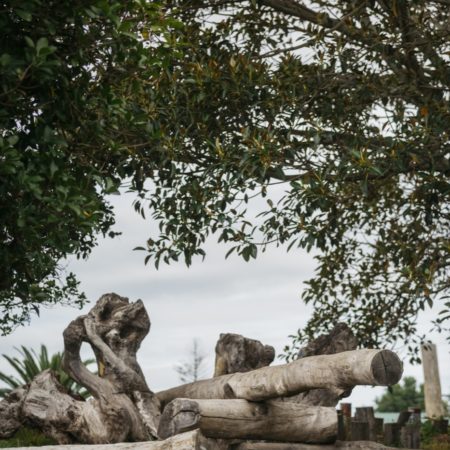 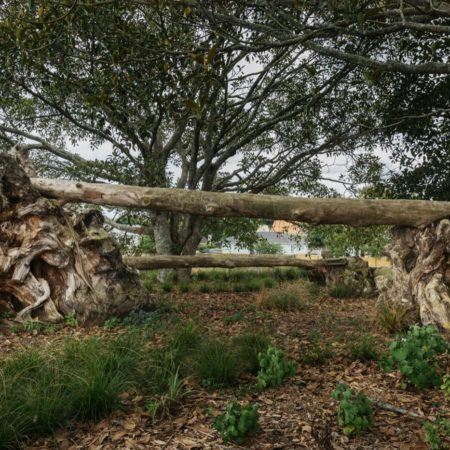 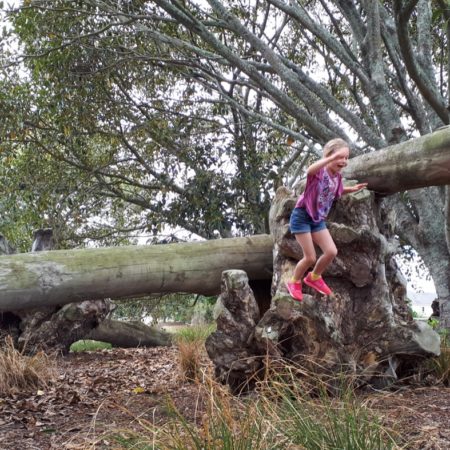 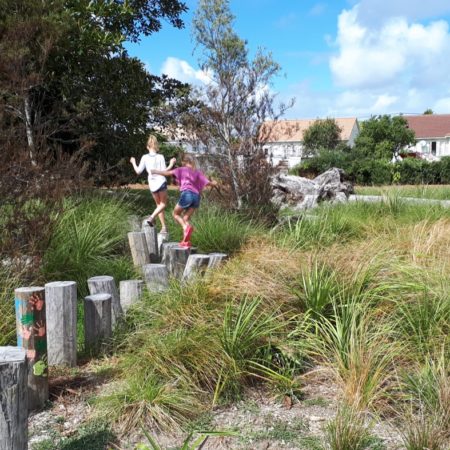 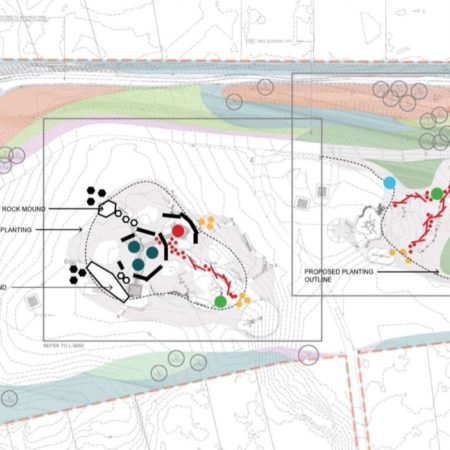 The design team scattered natural play opportunities throughout the reserves, to discover beside the restored stream, under islands of trees. The majority of play areas would appear upon exploration – large excavated or constructed basalt rock formations and giant ancient swamp kauri stumps. These play areas would be connected to main paths by stepping stones, mulch paths, and boardwalks. They offer children a unique experience to engage with their restored environment, to ‘get dirty’ and enliven their imaginations. Mana whenua worked with the design team to realise an opportunity to integrate traditional Māori play into the project. In Māori society, traditional games and aro-tākaro (play items) are inextricably linked and highly valued. Ngā aro-tākaro reinforce social norms and connect people to their environments. They become a means for children to engage with nature and history simultaneously through challenge and learning.
Traditional Māori play elements installed include: • A torere tree for climbing • Giant upturned ancient kauri log roots – te ko-uru which are linked by ko-papa; • Several dozen hikeikei on which to hop, jump and walk over; • A land-based kōkiri; and • A series of wera-te-paatu to practice agility, speed and balance.
Unfortunately, budgets did not materialise for the original play structures proposed for Te Auaunga. Therefore, the project team had only their existing landscape budget to deliver on promises to the community. The construction of Te Māra Hūpara was undertaken entirely with products recycled from the site (basalt rock, felled trees, earth, and mulch), and items rescued from waste streams (re-purposed jarrah power poles, and swamp kauri stumps destined for the chipper). Despite these limitations the design-construct exercise delivered a play intervention with significant physical and cultural impact.
Te Māra Hūpara and Ngā Aro Tākaro was a design-build to integrate the organic forms of earth, trees, rock, and logs. We were assisted by a 3-D electronic points survey of the roots and trunks of the mature trees. Documentation was through CAN notes with marked-up photographs. These were informed by IPTED/CPTED guidelines and playground environmental/safety standards.
Ngā taonga tākaro utilised materials from the site, are integrated into the existing landscape, and were specifically chosen for their relevance to the values of Te Auaunga and to the mana whenua group. Some of Māra Hūpara’s areas are hidden to encourage exploration, but also legible – associated with ‘islands’ of mature tree-groups and signalled by informal paths and kohatu (mauri and stepping stones). Massive swamp kauri, some as large as 12 tonnes, peek above low vegetation to reveal play areas.
Te Māra Hūpara was signed off by an external play specialist to ensure the safety of fall heights, accessibility and cushioned falls were compliant with standard regulations.
After the construction of ngā aro tākaro, the local school staff and pupils attended workshops to learn about traditional taonga tākaro and games, and to decorate a select number of the hupara, which have subsequently been installed in the reserves.
Māra Hūpara has received hundreds of visitors, including Mataawaka Māori and mana whenua. Kaumātua remember ngā aro tākaro, and many had tears in their eyes to see their mokopuna playing with them. 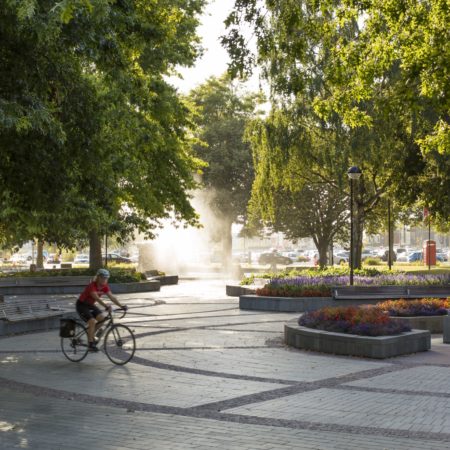 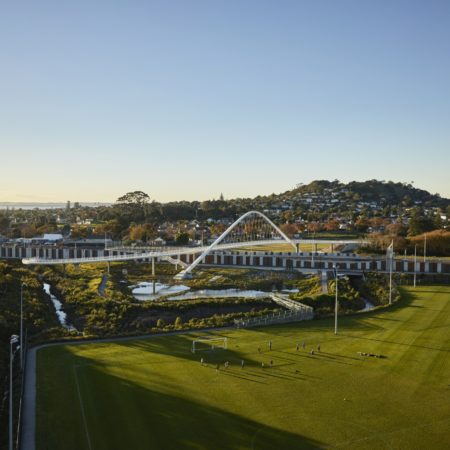 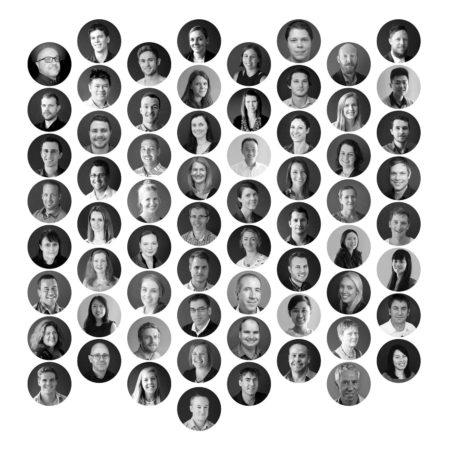