Flanders’ second largest market square is located in a rural municipality, Sint-Lievens-Houtem. Because a lot of sewer works on and around the Market Square were scheduled to be done, the municipality decided to immediately renew the entire Market Square. The reason being to increase and improve the habitable space and the perception of the square, which had become a large, mundane car park and thoroughfare.

The Sint-Lievens-Houtem Market Square is trapezium shaped, has an area of approximately 2 ha and partly due to its elongated character and sloping topography, is a unique place. It’s 359 metres long with a maximum width of 85 metres and there’s a difference in height of approximately 4 metres between the highest and the lowest point of the square. The village has had an annual fair and important pilgrimage since the middle Ages. This Sint-Lievens pilgrimage was held on Easter Monday and commemorated the transfer of the relics of Saint Livinus from the village to Saint Bavo’s Abbey in Ghent. This is witnessed by the historic Livinus cross on the Market Square. The annual winter market, held on St Maarten, has been recognized by UNESCO as a unique world heritage since 2010. 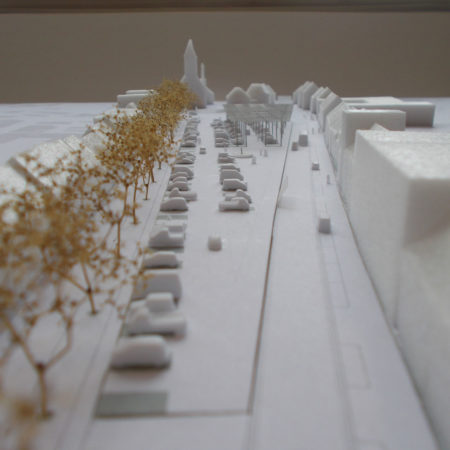 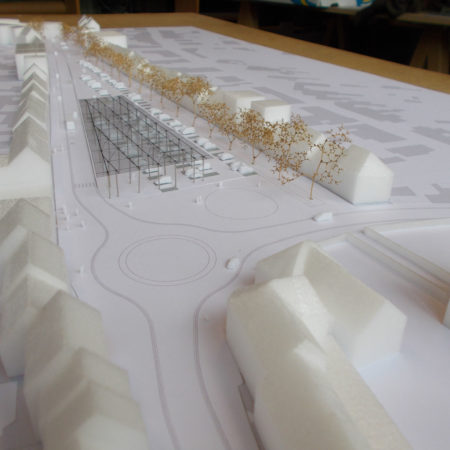 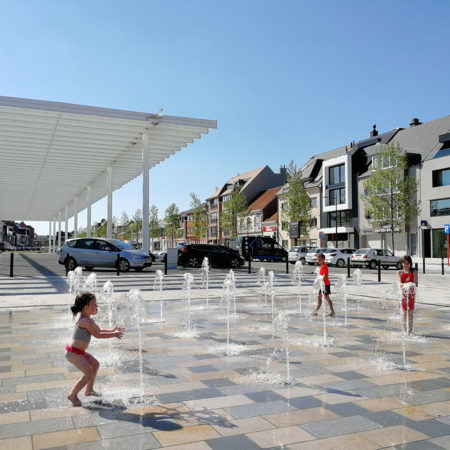 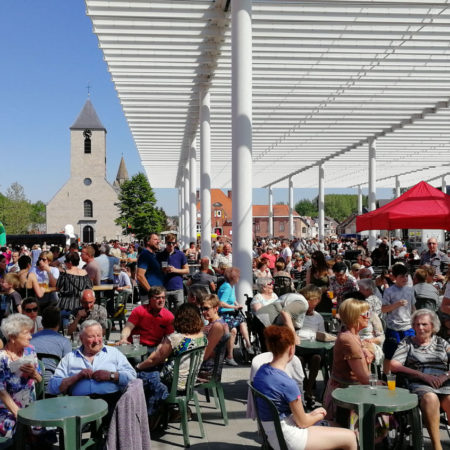 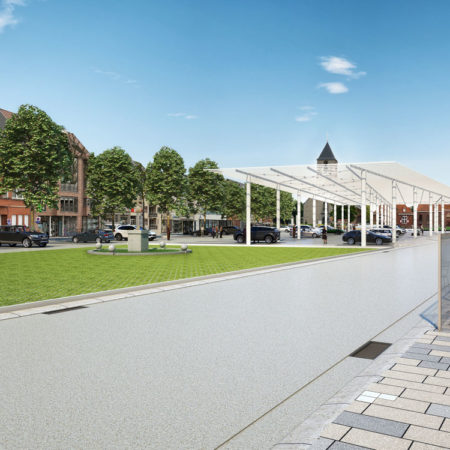 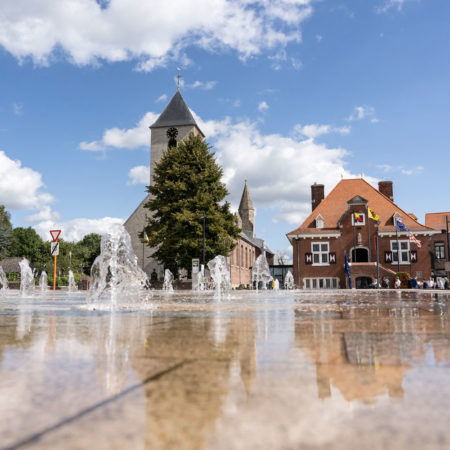 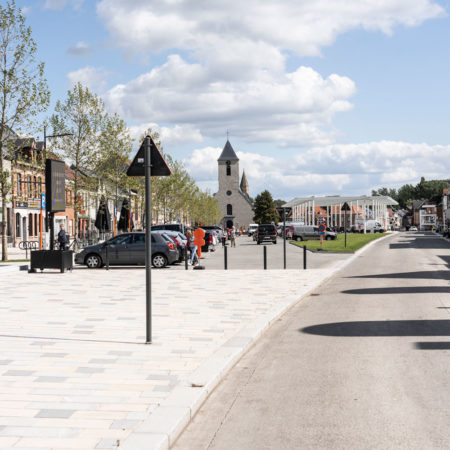 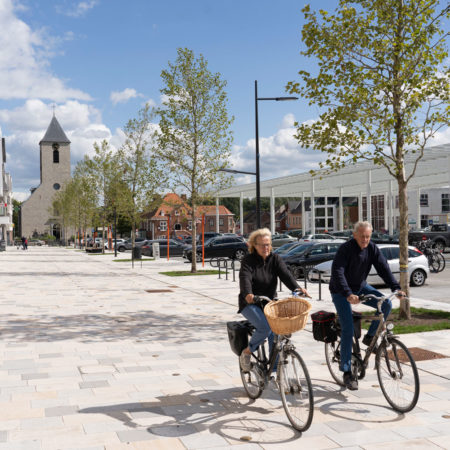 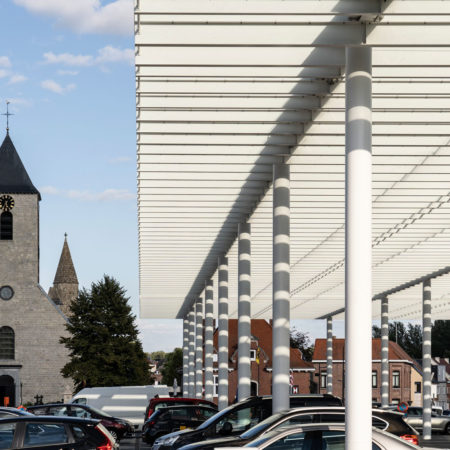 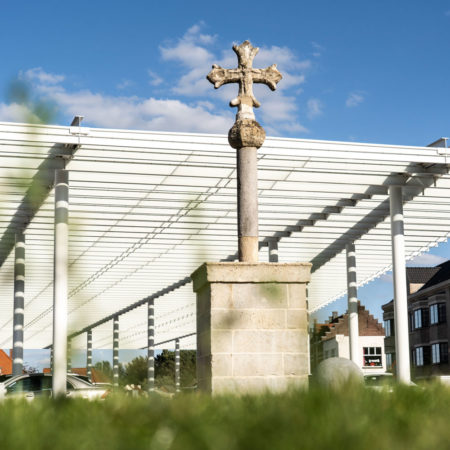 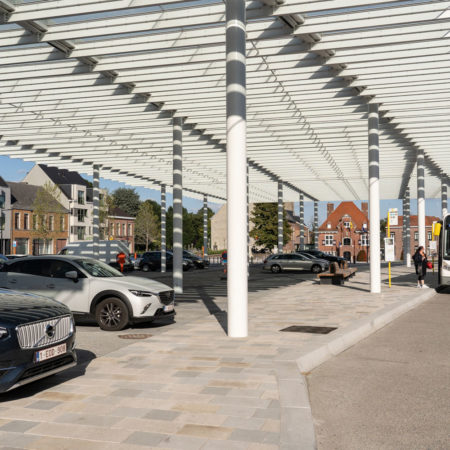 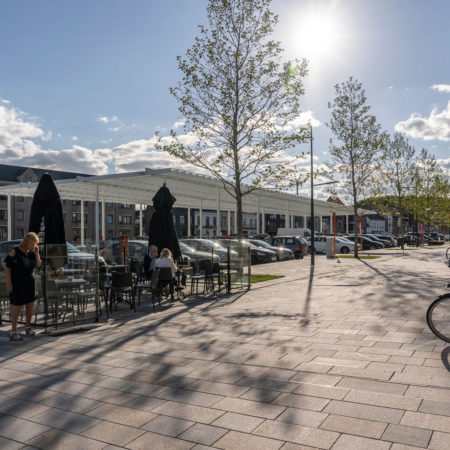 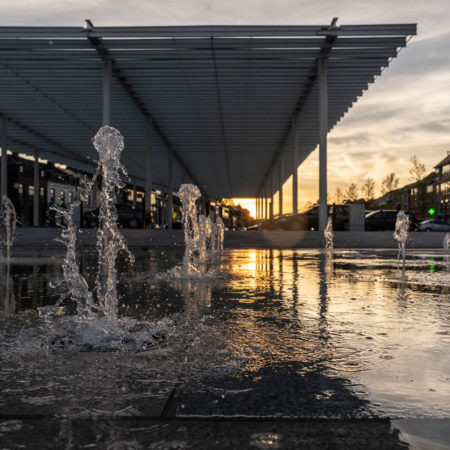 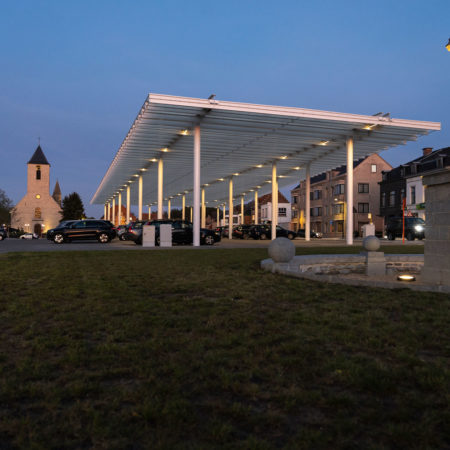 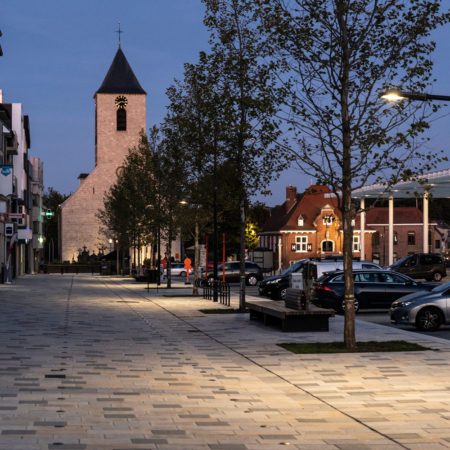 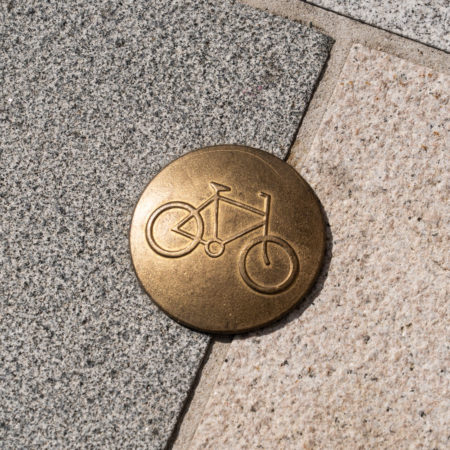 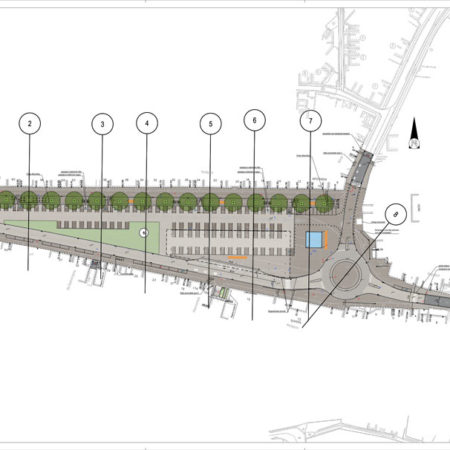 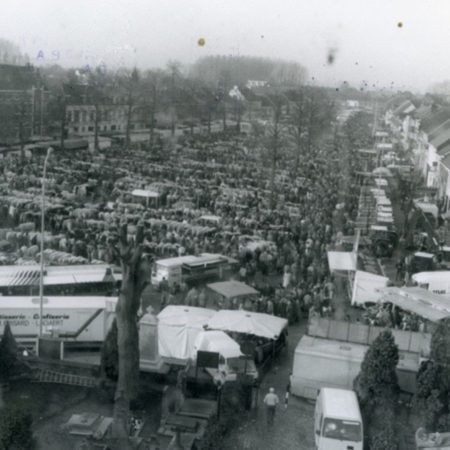 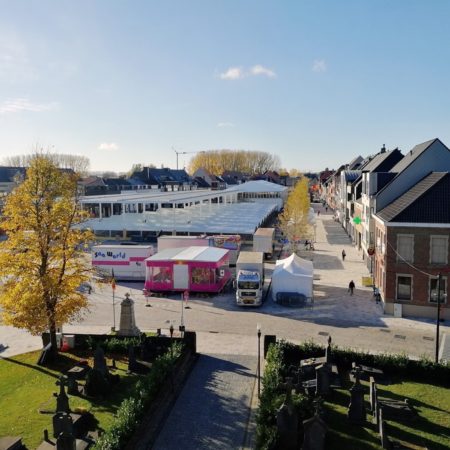 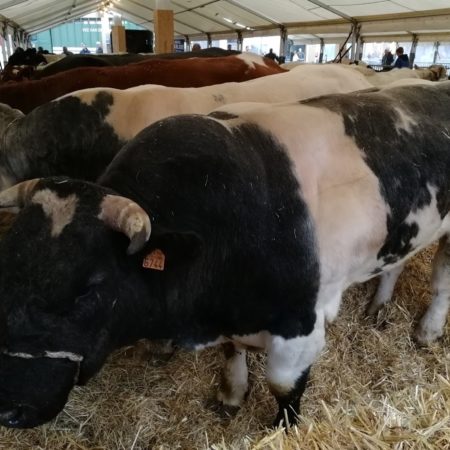 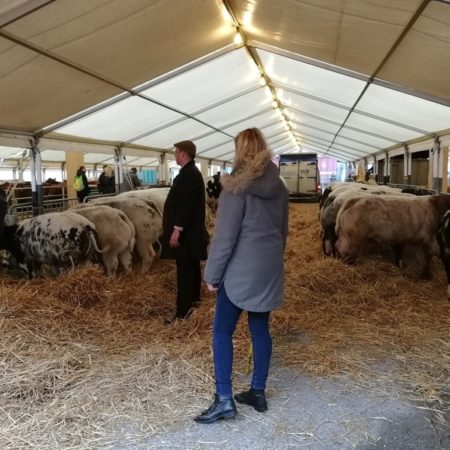 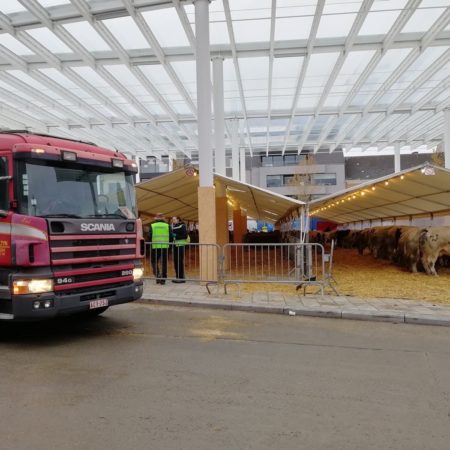 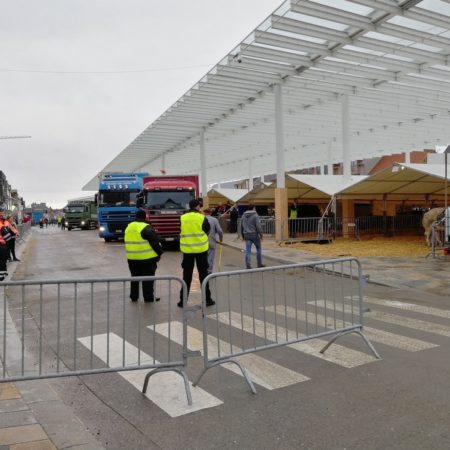 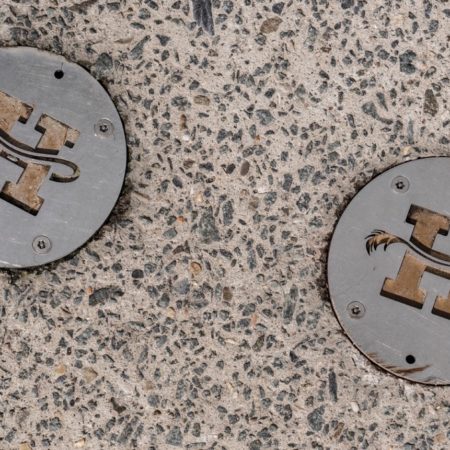 The pilgrimages are said to have been the basis for the expansion of the originally early medieval ‘dries’ or square to a large ‘plaetse’ or place. This ‘plaetse’ not only had an important commercial function for the local cloth industry, but also as a horse market. There have been drovers’ roads for the sheep flocks between the ‘dries’ and the surrounding fields for a long time. And until the 18th century the ‘plaetse’ was also one large common pasture for the cattle from the large manor houses in the area. There were also ponds for fish farming, a guild and aldermen’s house with a pillory. The ‘plaetse’ was therefore used for very diverse events.

A renewed ‘grand’ square
Restricting the ‘road network’.
The square was completely redesigned in order to bring back the grandeur of this space. To make this possible, traffic circulation was dealt with thoroughly. The roads were constructed around the square and isolated the central space, which was mainly used as a poorly arranged car park. The traffic space was reduced and condensed down to 1 driving lane on the south side of the square. A T-junction on the western side and a roundabout on the eastern side are necessary functional alterations that ensure that traffic can be dealt with in an organized manner. Parking was also better absorbed using entrances and exits, thereby increasing road safety. The safety around the school on the Market Square has been improved by means of a safe crossing point, a school bus shelter at the entrance along the school side and a broad, protected pavement.

The redesign of the traffic circulation gave the opportunity of realizing an 11m wide and 275m long promenade on the north side of the square. This promenade is free of motorized traffic and includes terraces, furniture and the planting of 18 tall trees (Platanus). A square on which you can partly park has been created between the driving lane on the south side and the promenade on the north side. However, there are a third fewer parking spaces on the entire square. The free space regained is therefore available for residents, visitors and passers-by. The historic Livinus cross has been positioned here in a green ‘dries’ or square, a reference to the origin of the market

A market hall of 2000 m² was erected on the location of the former aldermen’s house. The market hall functions as a covering for the weekly market, the annual winter market and various other activities. All activities that are organized on the square then become less dependent on the weather. In addition, the architecture and location of this market hall emphasizes a number of sight lines and walking routes.

A water level (with integrated fountains) is also a reference to the former ponds on the ‘dries’ or square and it also forms an attractive element on the square. In addition to the reconstruction of the upper structure, the entire sewer system was of course redesigned through a separate system. To optimize water management, a large underground buffer basin has been installed, including a special plastic formwork system for concrete cover plates. The buffer basin, which should prevent flooding, has a capacity of 900 m³ and is prepared for the collection of heavy rainfall. It ensures the collection and delayed drainage of rainwater to the Smoorbeek. 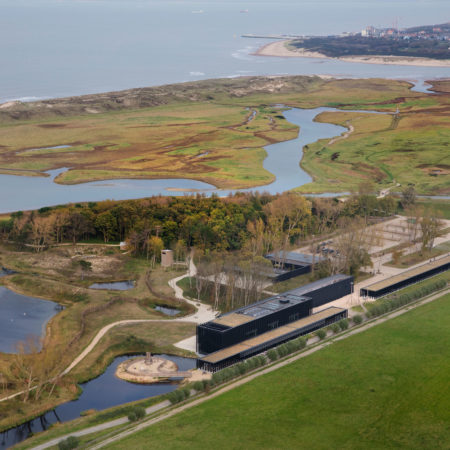