The site is located in hilly, residential neighbourhood in West Los Angeles, and bordering to neighbours at different elevations. The site was originally bowl-shaped and covered in wild, overgrown natural vegetation, some of which was kept to provide structure to the design and to create privacy through visual screening. An old barn, located at the far end of the garden and part of the original structures on the site, was kept and transformed into a guest house. The intention for the design of the garden was to respond to the architectural form and style, that included a modern interpretation of Tudor elements, with clear, linear forms, and to achieve a functional landscape with a simple, yet elegant spatial design. The clean aesthetics of the architecture forms a backdrop to the design of the garden, which is seamlessly integrated with the building structure to create a fluidity between the indoor and outdoor spaces, providing a functional design that is adapted to the warm climate of Southern California. In a series of spaces of different character the landscape unfolds when moving through the site, yet expressing a coherency within the overall design concept. 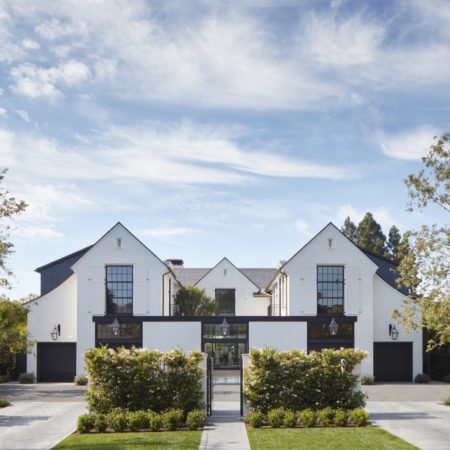 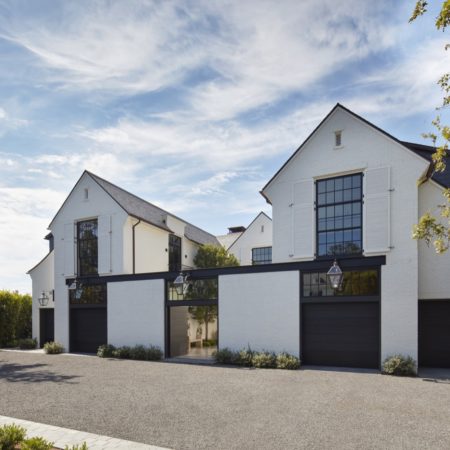 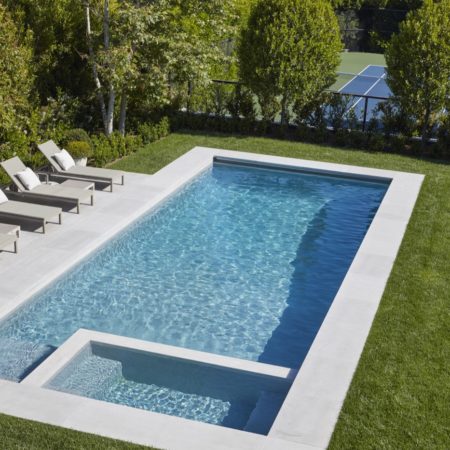 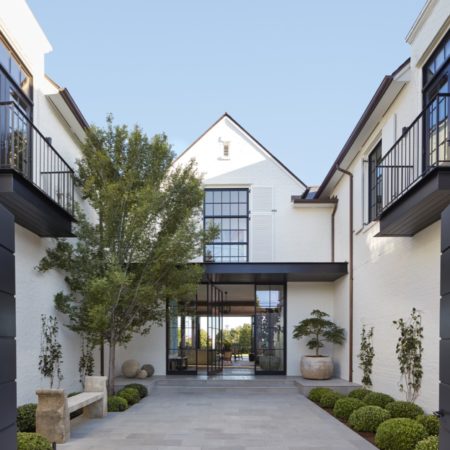 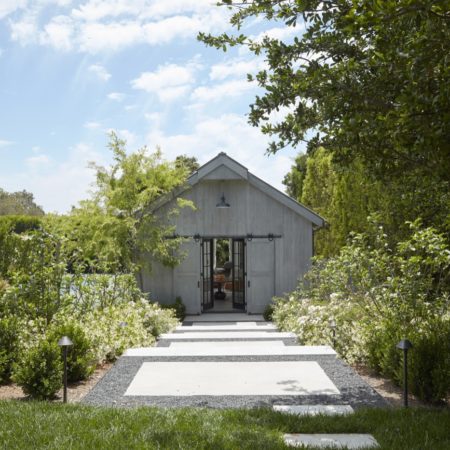 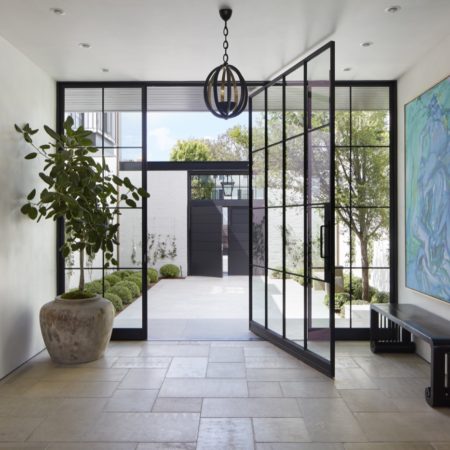 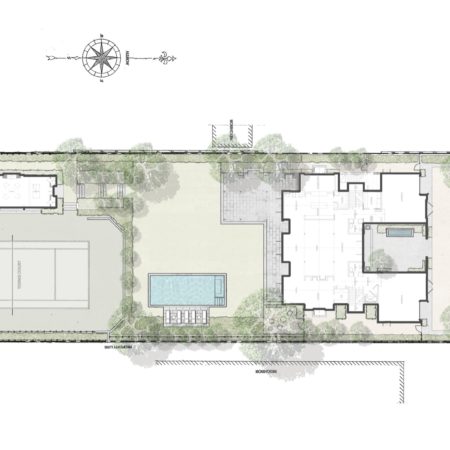 The landscape is divided into four separate areas of different character and use. The front yard motor court was designed to provide a sense of arrival and separation from the street. The ground is covered in a layer of gravel of crushed blue stone, and has a simple planting scheme of sycamore trees and Ligustrum hedges. The entrance courtyard is formed in the recessed, negative space in-between two building volumes, and is offering an atmosphere of contemplative reflection before entering the house. The courtyard is paved with limestone and the planting include Buxus topiary and Stephanotis vine, climbing the walls. The garden at the back of the house include the structural elements of a pavilion, terraces and a pool area, which is designed to be in proportional scale to the building and in balance to the spatial layout and structures of the garden. The use of light coloured limestone slabs in clean, austere lines for the raised terrace and steps form an extension of the building. The same material is also used around the edges of the pool and in the set of stairs that leads down towards the guest house, where the limestone is combined with dark gravel in a continuation of the monochrome style of the architecture. The originally bowl-shaped site was levelled by the installation of retaining walls, that are concealed behind hedges. The levelling of the site divided the back garden into two separate areas, where the differentiation in levels provide a natural division between the upper garden area and the sunken area of the tennis court, which is hidden from view.

In reflecting the concept of merging old with new, which can also be seen in the architectural elements incorporated into the design of the building, the design team worked on preserving some of the existing, mature trees and vegetation on the site. A selection of cuttings taken from the original vegetation on site was carefully incorporated into the informal planting scheme of white roses, jasmine, hydrangeas, apple trees and Pittosporum shrubs, that are planted on the gentle slope down towards the guest house. The colour palette of soft green tones and white flowers and foliage offers a contrast to the monochromatic colour scheme of the hardscape detailing and building structure. The design of the garden and the planting scheme, with the incorporation of elements from the former wild, overgrown natural vegetation into the design, presents a landscape of simplicity and restrained elegance.