!melk is an award-winning landscape architecture and urban design practice that specializes in master plans, large urban infill projects, waterfronts, streetscapes, plazas, parks, and gardens. Established in 2010 by Jerry van Eyck, the office draws from an extensive international portfolio encompassing over 20 years of experience conceptualizing and realizing projects in cities across the globe.

Known for their positive and optimistic attitude, the !melk team has built strong and sustaining relationships with clients that include some of the most prominent real estate developers, as well as national governments. !melk’s past and ongoing project partners include the most respected architects and engineers from around the world.

!melk champions the design of democratized, high-quality public spaces that exude their own authenticity and has cultivated a reputation for delivering well-crafted, innovative, and contextually significant designs that can be enjoyed year-round, and that are transformative within their urban context.

Creative solutions are derived from focused research, imagination, the use of advanced technologies, and attention to detail. For !melk, there is no formula for design. The firm’s forward-thinking multidisciplinary and collaborative approach blends fantasy, pragmatism, sustainability, economics, and marketability to tackle projects at all scales and in all contexts. !melk studies both the current needs and the projected demands anticipated for every project. !melk’s designs always promote economic development and cultural engagement initiatives beyond their boundaries.

In addition to this, !melk is also known for creating designs that serve as civic and cultural destinations. Each project strives to become a valued public amenity by capturing the hearts and minds of the user. !melk achieves this by always creating iconic moments and memorable experiences that give every project a unique character and distinct identity.

The Las Vegas Strip, the most visited tourist destination in the world, recently received its first-ever park, a spectacular public space designed by !melk, that is destined to become the most trafficked park in the world. What makes this project remarkable is the fact that private corporations, the owners of the properties along Las Vegas Boulevard, recently came to realize the value of investing in outdoor public space versus traditional (buildings) real estate development. They also see the economic and marketing value of sustainable, authentic, and contextual design. A more complete and mature urban condition has begun to form as a contrast to the prevailing thematic and artificial attractions that gave Las Vegas its familiar reputation to date. The cutting-edge design of “The Park” celebrates the context of the Mojave region and reinstates what Las Vegas once was – an oasis in the desert.

One of the most transformative urban landscape projects in the U.S. today is taking place within an unexpected context. The infamous Las Vegas Strip, once known only as a highway, is now becoming the main spine of a real and functioning urban fabric.

In 2012 a Master Plan exercise was initiated by MGM Resorts International, the largest property owner along The Strip. As part of the Master Plan team responsible for the reprogramming and reconfiguration of the MGM properties, !melk was commissioned to conceive a public space network that caters to the growing influence of pedestrians.

In the Las Vegas of today the car is no longer king, and property owners have come to realize the value of well designed public space. Market trends are shifting away from gambling and instead focusing on a variety of activities in and around the public realm. Realizing the power of public space as an economic driver, MGM decided to implement a first phase with a total investment value of 400 million dollars. This phase included the reconfiguration of the hotel/casino frontages of “New York New York” and “Monte Carlo” with a variety of new restaurants, sidewalk cafes and retail outlets, as well as a new 20,000 seat Arena, all embedded within a cohesive public realm. 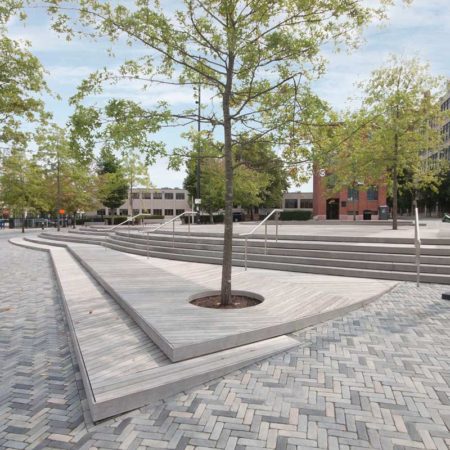 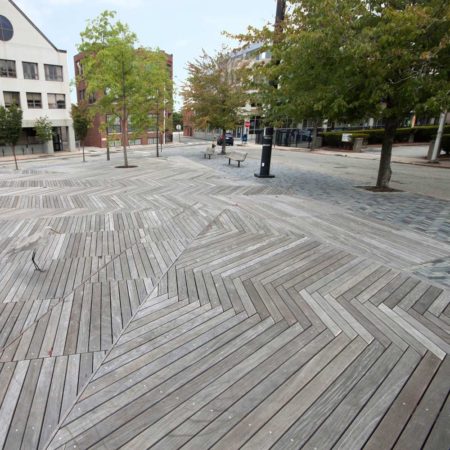 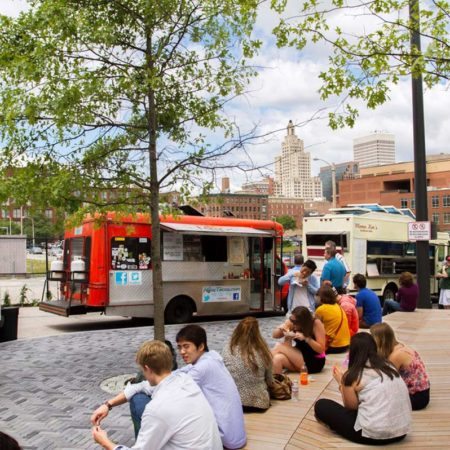 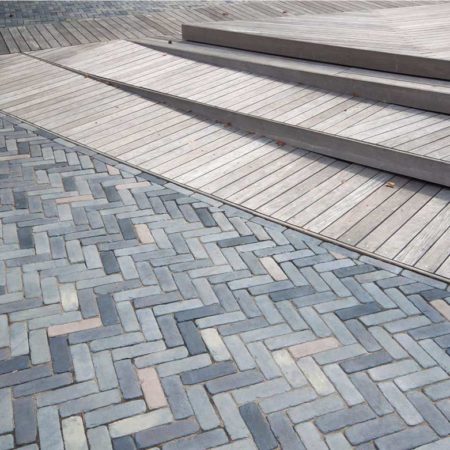 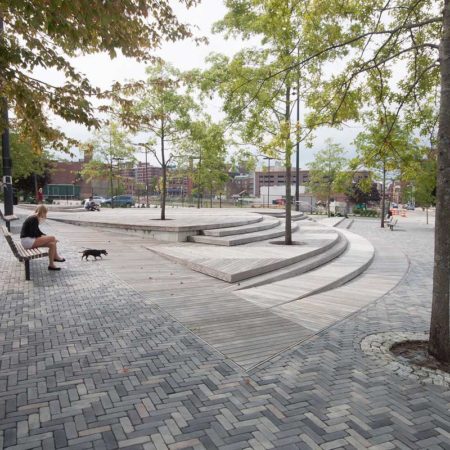 As part of the master plan, !melk developed design standards and guidelines to define the character of the district. In order to uphold a historic quality, !melk created a cohesive design vocabulary prioritizing materiality and detail: !melk generated a new paver, “!melk blue” to promote a historic atmosphere, while complying with today’s standards and codes. The integrated custom tree grates, also designed by !melk, were conceived as “jewelry of the Jewelry District.”

The master plan’s main public space, “Ship Street Square” establishes a new public gathering space at the heart of the Jewelry District, providing a main plaza for flexible programming and use. As a result of this Master Plan effort, Brown university has continued expanding its presence in the neighborhood, which because of that also became a popular destination for new businesses. 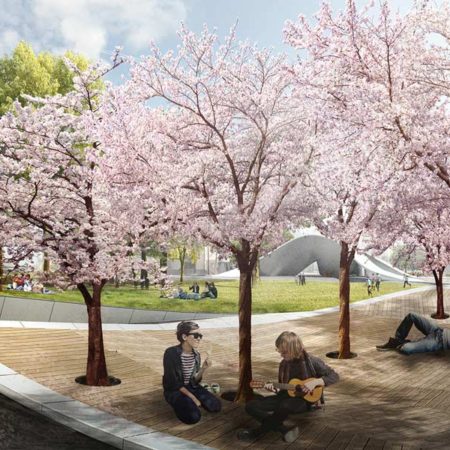 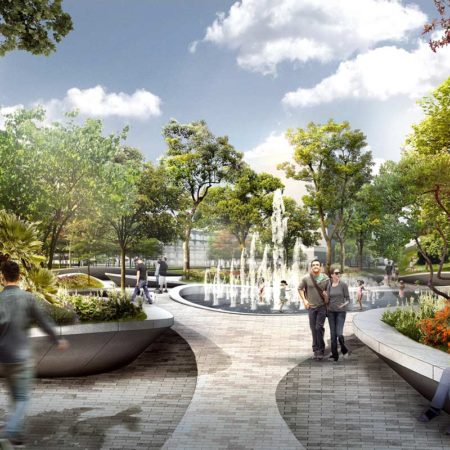 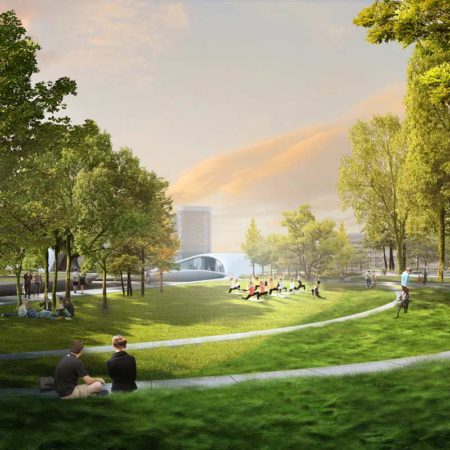 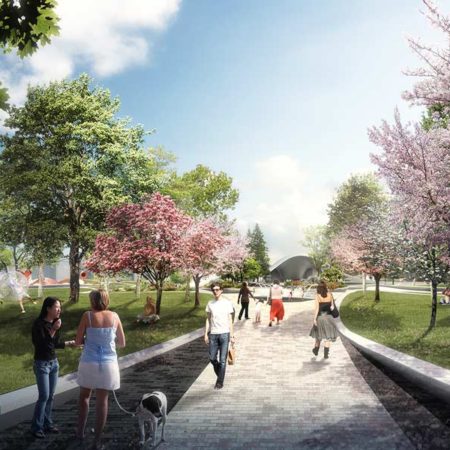 The new design for St. James Park represents a world-class and innovative public space where people can meet, work, relax, and find inspiration. St. James Park is destined to become a source of civic pride for the community.

If the ambition for St. James Park is to reiterate its former incarnation as a verdant green oasis, the reality of water scarcity in the region is a significant impediment. The design approach for the new St. James Park is simple: the entire park should strive for net-zero water use. In this proposal, each lawn, gathering area, planted zone, and tree pit is a self-contained water-management system divorced from city water. The sources of irrigation water include stormwater runoff and wastewater contained and stored on site. What’s notable is that each planted area acts as a “recharge basin” connected to a central bio-filtration system.

The park consists of a series of planting structures, called “Petals,” that vary in surface area from 250sf – 55,000sf. Each “Petal” performs as its own closed loop water-management basin below ground, while above ground offering a variety of experiences. Careful manipulation of the geometries and topography of the “Petals” subsequently delivers a spectacular park character. The result is an extremely elegant and unified setting that synthesizes history with ecology, and experience with function. 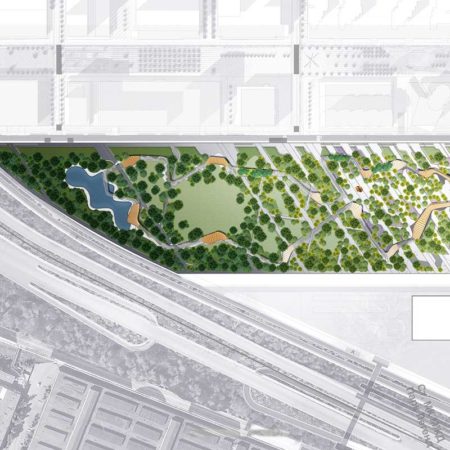 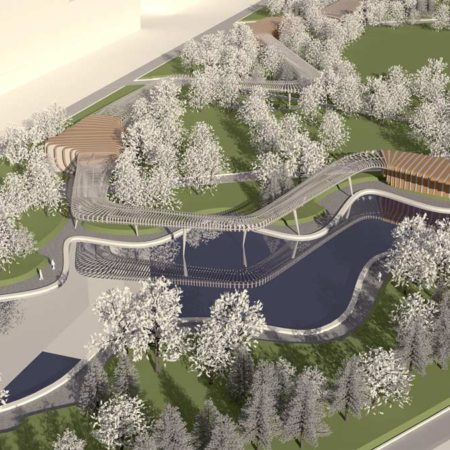 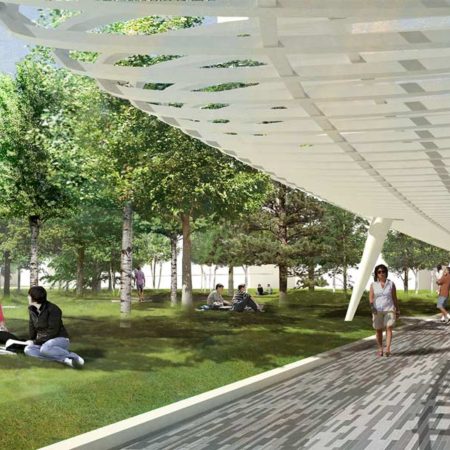 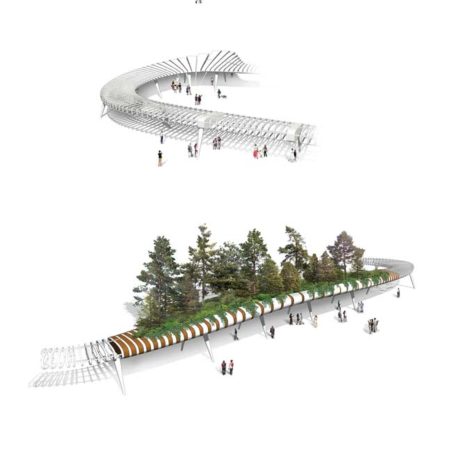 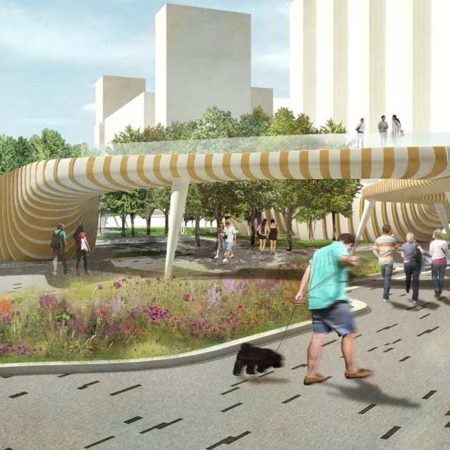 !melk, in collaboration with Project Megonom, is designing a 25 acre park for one of the largest single-owner (LSR Group) urban development projects in the world today. !melk’s park will be integral with the “ZILArt” Neighborhood, which will become a new destination in central Moscow.

The park is at the former location of the ZIL automotive factory. !melk’s design echoes the industrial legacy of the site with a 4,600 ft (1,400m) long “Assembly Line” that loops through the park space, providing areas of shade (and warmth!) cafe’s and restaurants, playgrounds, restrooms, and elevated walkways.

In addition to the iconic sculptural quality of the “Assembly Line,” the park also features a small lake which doubles as a skating rink, durable pavements and seating, a plant palette designed to provide visual interest year-round, and deliberate paths of travel to accommodate the anticipated foot traffic of the new “ZILArt” Neighborhood.