Berlin is changing. In the inner city living space is growing scarce and rents are rising. Möckernkiez is a visionary project in which the demand for a social, sustainable and barrier-free living environment is implemented in an exemplary manner.

The outstanding quality is the central location of the approx. 3-hectare site in the district of Berlin-Kreuzberg, directly in the southeast of the Park am Gleisdreieck. Compared to the surrounding urban space, the plot is situated about 4 m higher on the level of the former train tracks. The neighborhood not only thrives on its attractive location, but also stands for a special kind of social and neighborly togetherness. It is characterized by a self-determined, intergenerational and holistic living concept. The model project is organized as a cooperative by Möckernkiez eG and is therefore not profit-oriented.

With regard to the holistic concept, architecture and open space intertwine. 14 residential buildings in passive house standard, multiple floor plans between 21-150 sqm and a total of 471 residential units generate a social diversity. With the goal of developing a diverse and mixed neighborhood, there are other uses besides housing that contribute to a lively environment. Social amenities and basic services such as a hotel, youth center, organic market, doctor, neighborhood meeting place and daycare center are integrated into the neighborhood and ensure short distances and a neighborhood atmosphere.

The residential quarter is designed to be car-free and oriented towards pedestrians and bicycle traffic. A total of 5 access points via stairs, ramps and 2 elevators ensure barrier-free access to the neighborhood.

The buildings, designed differently by individual architects, are linked by a generous and urban open space, which is divided into different degrees of private (terraces), semi-public (courtyards) and public (circulation system). A special challenge in the design was the greening of the area on top of a parking lot.

A wide paved path belt runs through the neighborhood and serves as a barrier-free circulation system. It is publicly accessible and connects the adjoining park, new Möckernkiez and architectural surroundings. It not only fulfills an access function, but also works as a common meeting place that opens up to three squares with an urban character. They are multifunctional communication areas and create space for movement and lingering  in everyday life and for special occasions such as local festivals and events.

The Yorcksquare faces outward in a representative manner and forms the prelude to the neighborhood. An essential component is the sculptural staging of the combination of stairs with seating steps and a slightly inclined ramp, which provides barrier-free access. The seating steps are inclusive and designed for all ages. Large flowering shrubs such as syringa are integrated into the steps.

Another central element of the design is the communally used inner courtyards, each of which connects the groups of buildings. Through structural interventions such as single-story, permeable multifunctional houses or slight elevations, the courtyards are separated from the public circulation system and take on a semi-public character. They are formed as green islands, which, especially for the ground floor apartments, create a buffer zone to the public circulation system. These garden spaces are created for the appropriation by the tenants and at the same time fulfill a high ecological standard. The flowering meadows contribute to increasing biodiversity and a cooler microclimate. The accumulating rainwater is largely infiltrated decentrally via the soil layer and infiltration trenches on the site.

Initially, the courtyards only received a design framework with main paths, basic greenery and some playground equipment. They are framed by a band of concrete slabs, from which seating walls with wooden supports rise up for people to sit and relax. The residents can gradually appropriate the courtyards according to their needs. The individual design gives each courtyard its own character over time. So far, for example, numerous raised beds have been added for communal food production. This creates polyvalent spaces of exchange in which residents interact with each other in the sense of a social and mixed neighborhood.

The demarcation of the private gardens was carried out in a processual and individual way by the residents. Instead of high fences and hedges, the image is characterized by loosely placed flower pots. This results in a varied interlocking of private and semi-public areas. 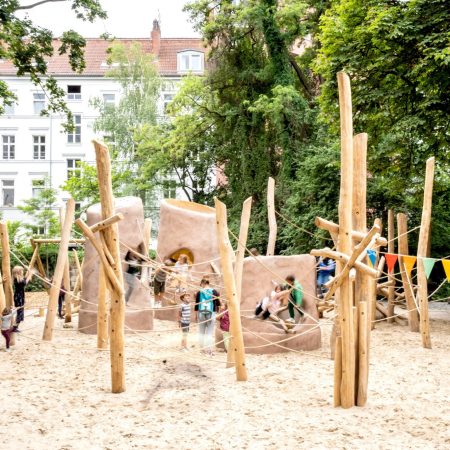 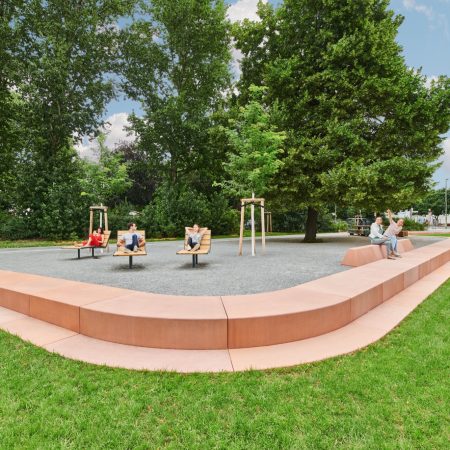 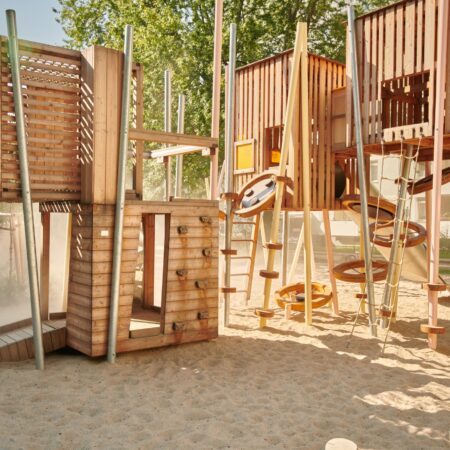 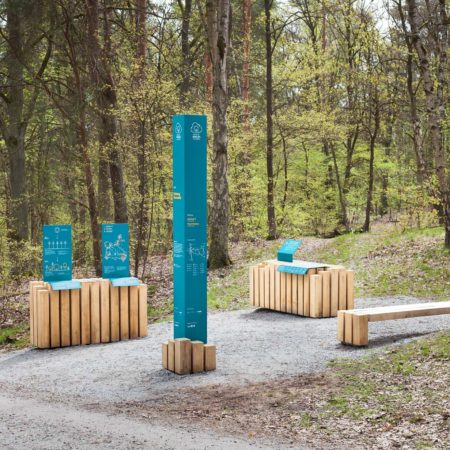 Wald.Berlin.Klima. – Exhibition in the Forest