In 2005 Henning Larsen Architects and Arkitekt Kristine Jensens Tegnestue won the International Architectural Contest about the new museum building at Moesgaard. Ever since, we, Arkitekt Kristine Jensens Tegnestue, have been part of the development and the implementation of the project and have, as landscape architects, played a role in creating the frames around Moesgaard Museum’s new exhibition building, that was inaugurated in 2014.

During the task of developing and implementing the project, we have been thoroughly enchanted by Moesgaard and not least the atmosphere, one is surrounded by, in this magical place. After the inauguration we have experienced a huge interest from many different places in the history and the many stories of the landscape, wherefore it has been obvious to make this book, which elaborates and communicates the joy we have had by getting to know Moesgaard better. In addition, we have here had the opportunity to gather a group of writers – who know much more about the landscape than we do – in order to jointly draw a nuanced and multifacetted picture of Moesgaard as a very well-kept cultural environment. 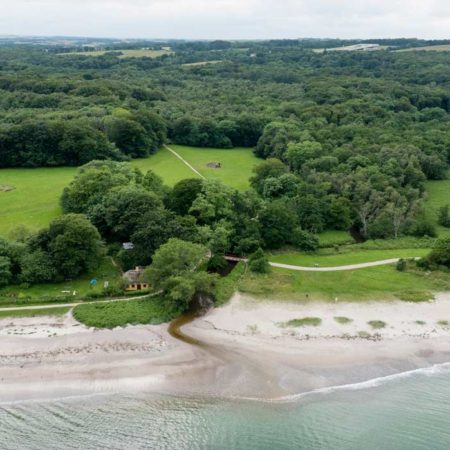 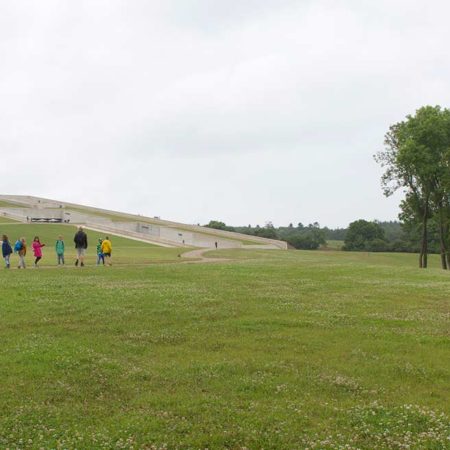 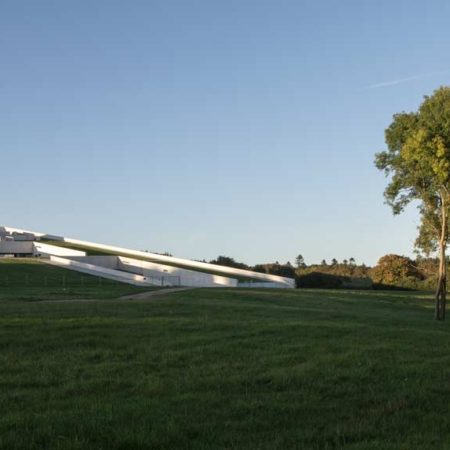 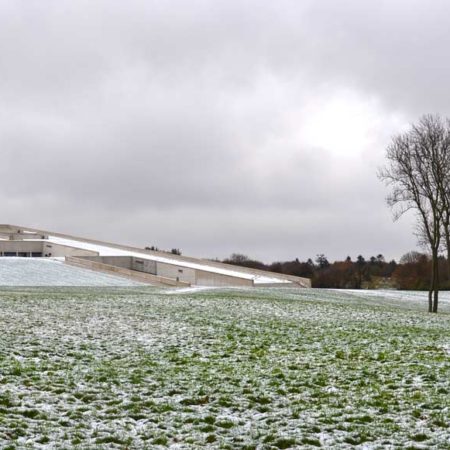 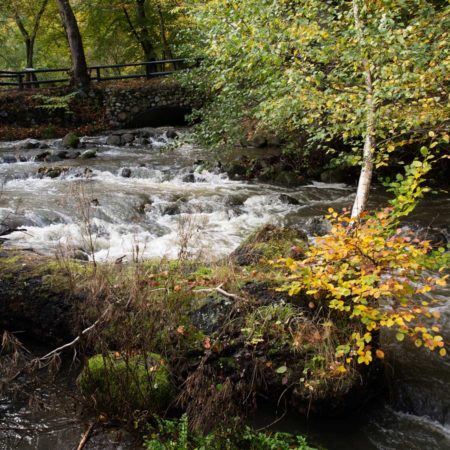 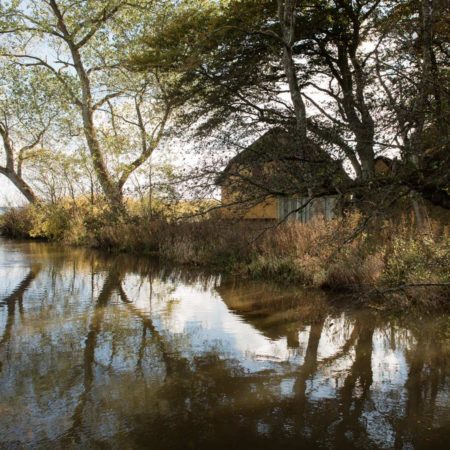 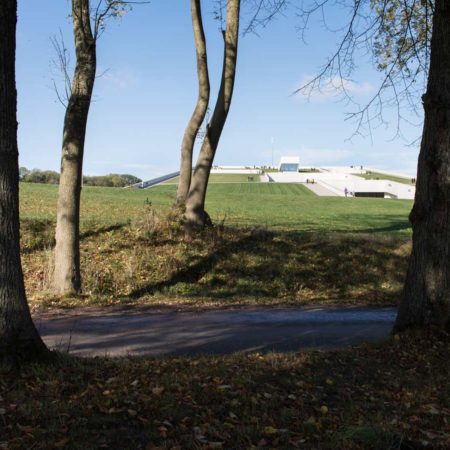 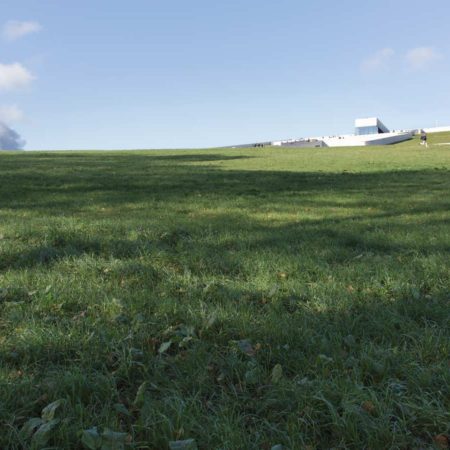 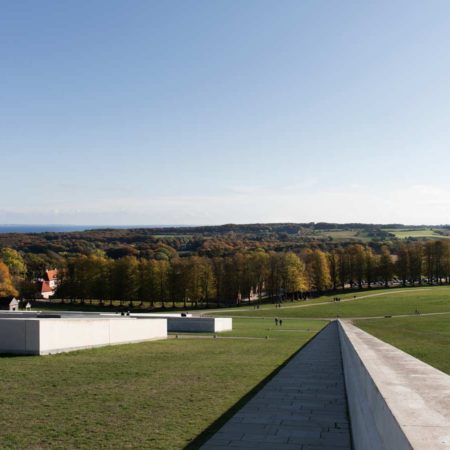 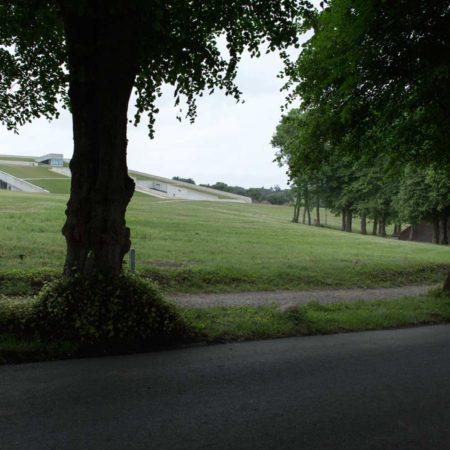 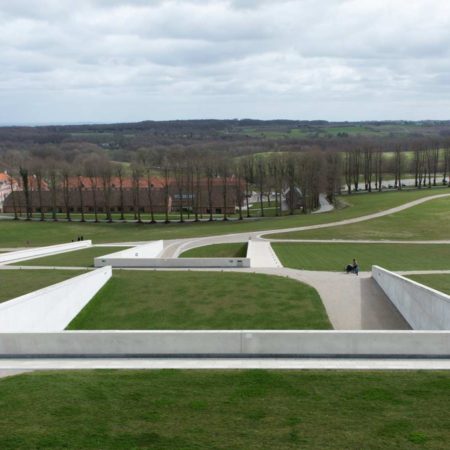 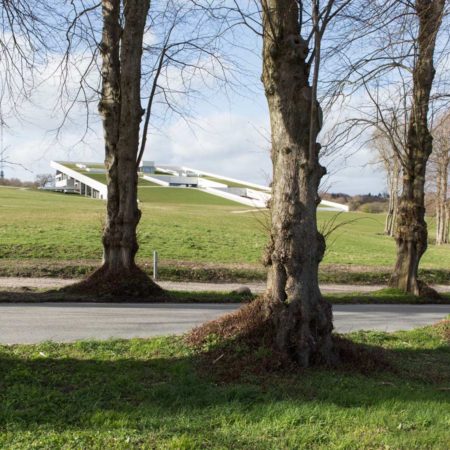 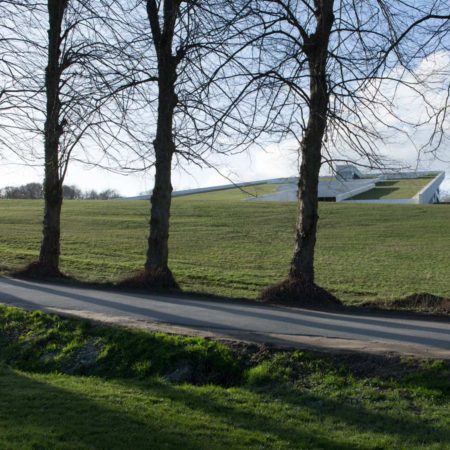 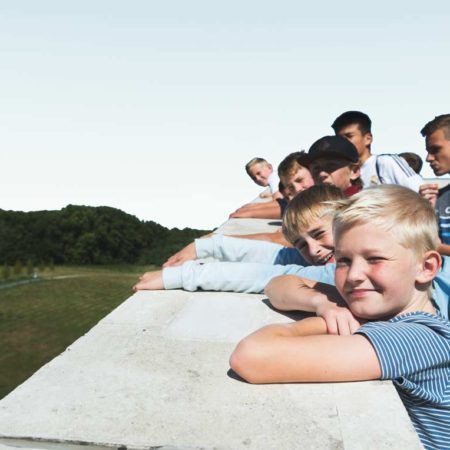 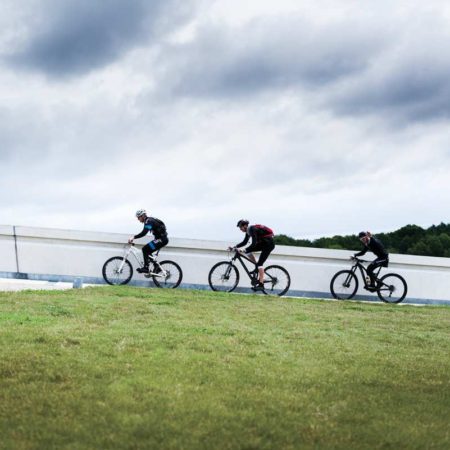 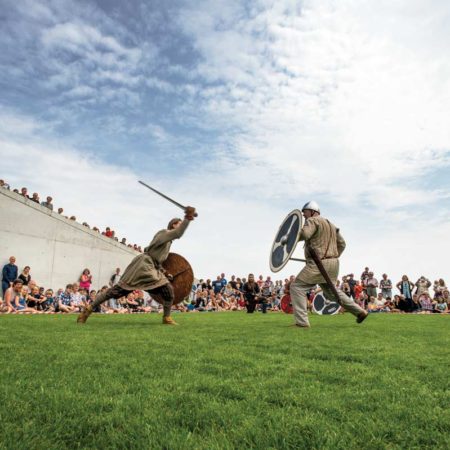 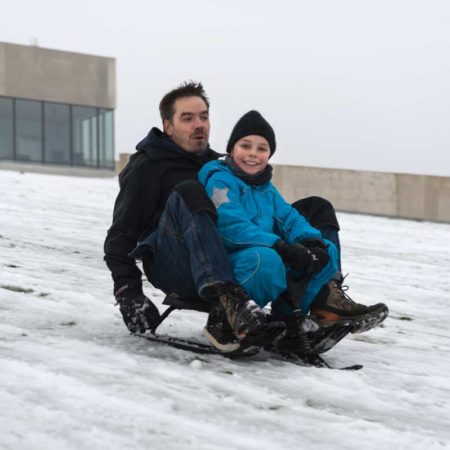 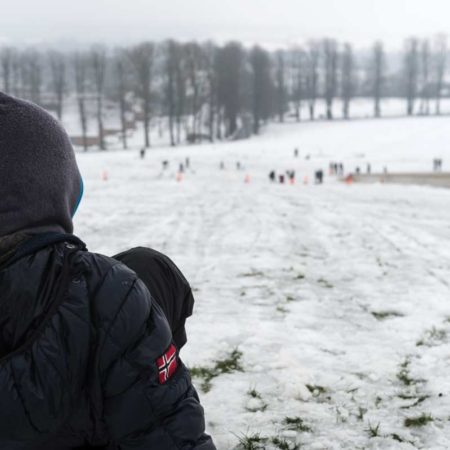 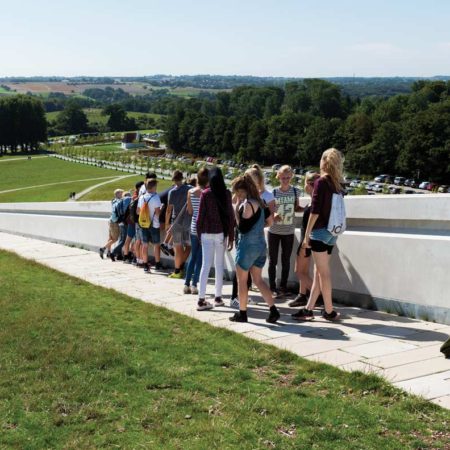 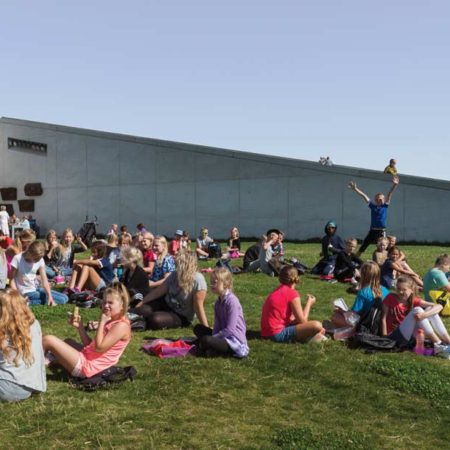 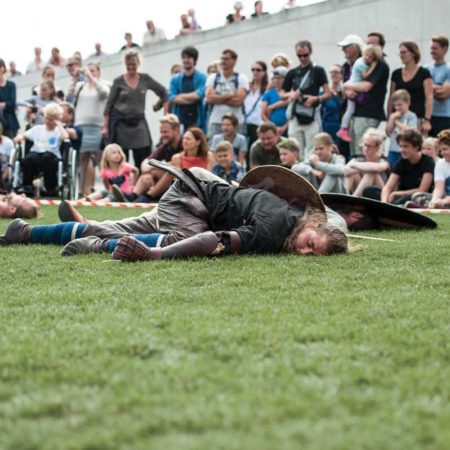 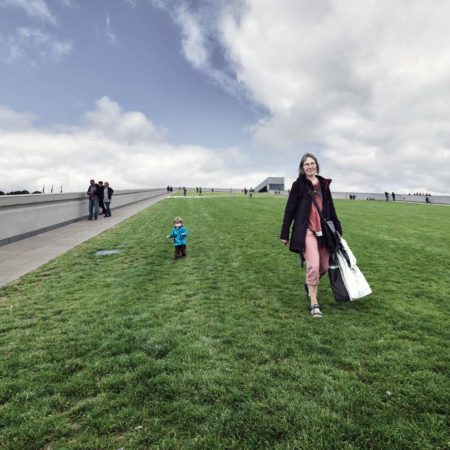 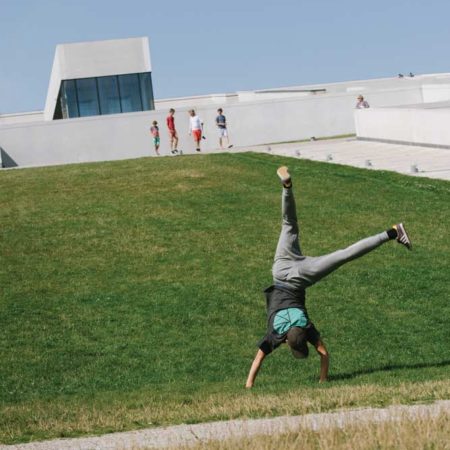 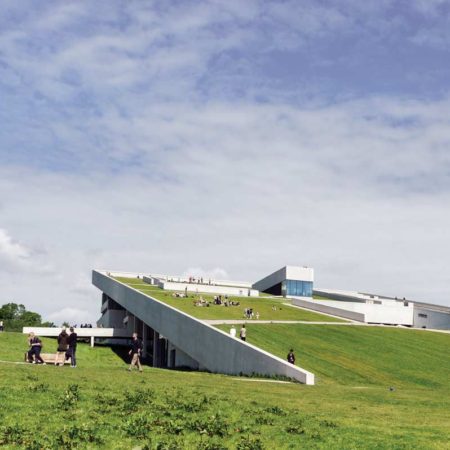 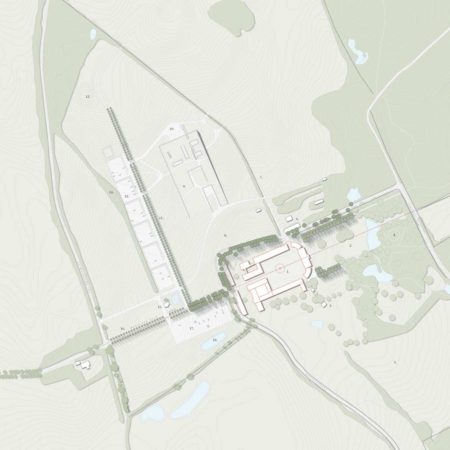 The landscape at Moesgaard is fairly exceptional in that it is, on one hand, a splendid piece of East Jutlandic manor landscape from around the 18th century and, on the other hand, holds completely new additions amongst visible remnants, dating back to ancient and medieval times. With the new museum building the landscape was given a modern feature, that has opened up for new experience opportunities. These opportunities are based on the inherent qualities of the place, but at the same time they add an edge to the old landscape. This compiled culture-historical mosaic of landscapes for ALL TIMES, today forms the sounding board for the museum, and contributes, as one of the few places in Denmark, to giving visitors a grand experience, where the museum mediation does not exclusively constrict itself to the exhibition objects of the building, separated from time and place, but is also there, more or less present on-site – in the landscape.   Besides from being a narrative museum landscape, Moesgaard is a favourite excursion spot: The citizens of the city cycle and walk in the forests, have picnics in the greenery, light bonfires, and swim in the sea. Moesgaard is a landscape of leisure to a whole city; it is a gorgeous melting pot for all cultures and people of all ages, and is, therefore, an excellent culture historical and democratic landscape – a LANDSCAPE FOR ALL TIMES – which we can learn from and which it is important to safeguard in the future.

In conjunction with the new museum building being inaugurated in 2014, the landscape at Moesgaard has become a more and more popular excursion spot. It blooms with beautiful pictures on social media of the landscape, that forms the background for sword-fighting men, dressed like the Romans of ancient times, or sledging down a white, snowy hill. Other pictures show lightly dressed runners on their way up the same roof on a dry summer evening, or picnic on the green grass in the park, while the sun sets and the lake mirrors the clouds. The latter almost resembles an evocative painting, that hangs in the old main building of Moesgaard, where you see a scenery from the park with the main building in the background. The painting is painted by F. Richardt in 1861 and shows estate owner Thorkild Dahl with his family in a small boat on the lake, around which the big trees of the park and the green lawn constitute an exclusive, landscape-like scenography. The manor garden, the forests, and the bay were generally a popular motif for many of the local and foreign landscape painters of the 19th century. Most famous is probably Janus la Cour, whose paintings often show the beautiful, wooded coast south of Aarhus.

The city and the city’s urban forms of life have moved much closer, and with the new museum building Aarhus has got a whole new landscape, which people have endorsed, almost like a new cityscape. The open grass space of the roof has opened up to a whole new way of going to the forest. Moesgaard has become a particularly vivid and lively landscape, which the citizens of the city embrace and are enchanted by to such a degree, that it has become the property of the people. The landscape is so well-visited that it is one of the most visited places around Aarhus, which is not least because of the many tourists. The popularity of Moesgaard confirms a modern lifestyle trait amongst city-people, namely, that we are concerned with being a part of, and taking part in, the good life and the cycles of nature. 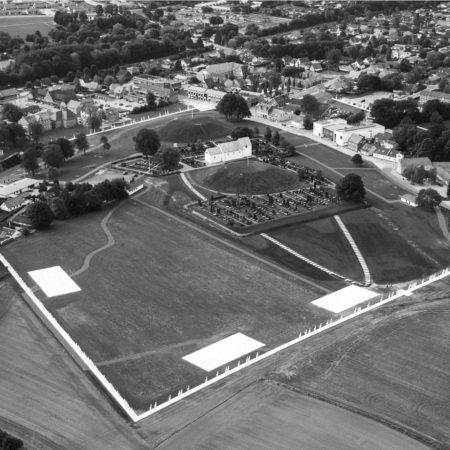