Most often one thinks that landscape architecture is built up with an idea, a draft from one stage to another. A landscape project raises different levels of questions we would like to address through the sampling of some of the experimentations we have realized. The movement of understanding leads us —in a tactile, tentative, anxious approach— to explore the sedimentation of forms in an experimental way. The images that we propose are more about the nature of pictures as a material, a neither-here-nor-there between fabrications that precede them, and processes that extend beyond them.

Their visibility requires the interwoven layers of several time-spans been shown: the short-span of production which threads and commands the taking of form; the long-span of accumulation which transforms everything even as perpetrates its memory. The resource document assembly is crossed by questions in on-site issues (water and air densities, materials under preparation for imaginaries), bodies (a continuous endeavor that shapes the inside and outside of visuals), figures (dazzling encounters between living beings in an open environment), seasons (mutations linked to the process that gives life through its disappearance), and rhythms (latencies that open up time for things in movement).

Landscape is really a small secretion of a fuller, slower movement of elements taking shape, of events welling up, of fleeting silhouettes, of respites from sedimentation, of the infinitesimal effluvia that movement brings in its awakening. Our work tries to retain those visions, in constructed work or in paper, for real or in pictures, of times where landscape and events intersect within the limits of a memory that unfolds and permeates the medium in which it is held.

Working the form in landscape means working with issues that run through it, which means opening up the critical space needed to evaluate them. These forms cause the difference, note the resemblance.
The work of configuration consists in using this difference, not presenting it as yet another ‘object’ (an anecdote) but arranging it around ourselves, configuring it so that it has an impact on us opening up new horizons. 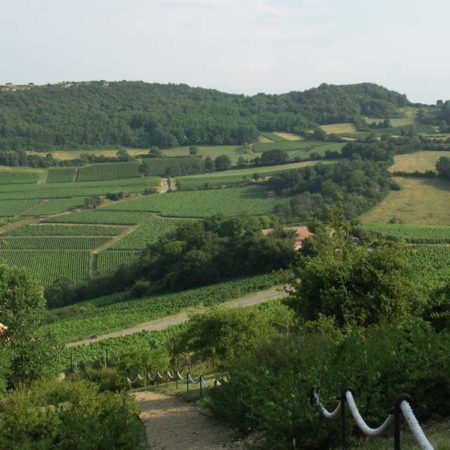 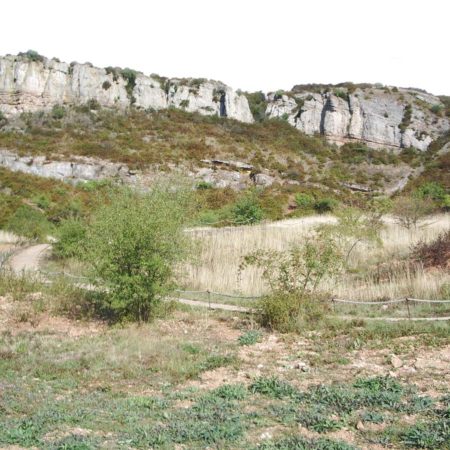 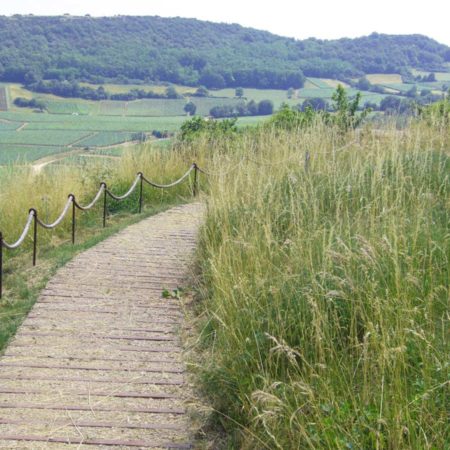 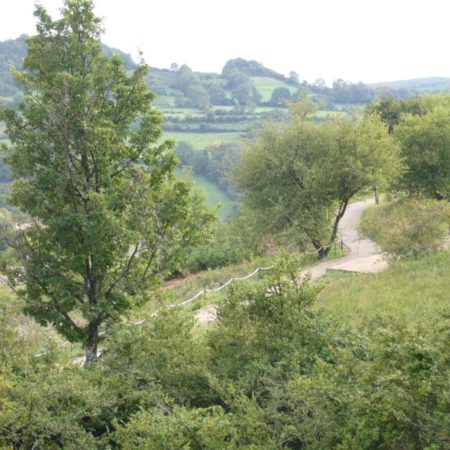 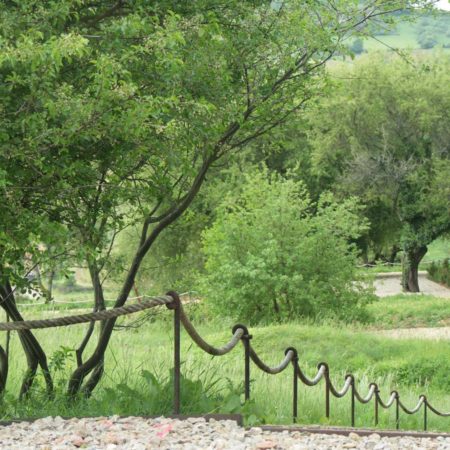 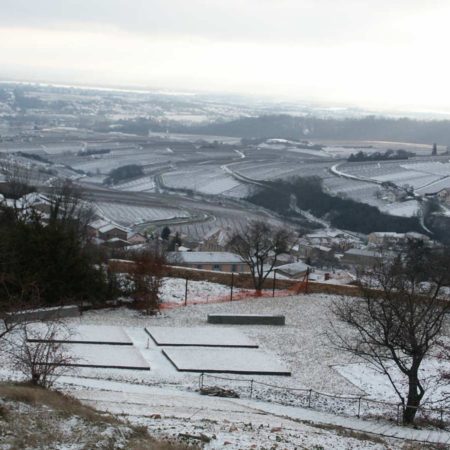 The masses are powerful; a rock where a dry boxwood landscape drops off; parcels of vineyard everywhere else for the production of Pouilly-fuissé. Travelling this millennium ground filled with the vestiges supposes grazing light footedly the length of a heterochronic lineament which splays pointedly times of pause and of commentary in situ. The path cannot be anchored to the ground-monument that accommodates the rest of the early men. A chain of metallic outlines organizes the passage while gripping itself to the abrupt slopes to keep its pace. It becomes lop-sided on contact with the topography, at the image of the curvilinear paths in the valley of the Saone. The drawing is reduced to its most simple expression of distribution of materials that inform usages. Pass here. Stop there. The economy of language reflects the economy of an agrarian production that exploits resources while constructing a meaning with a minimum of means 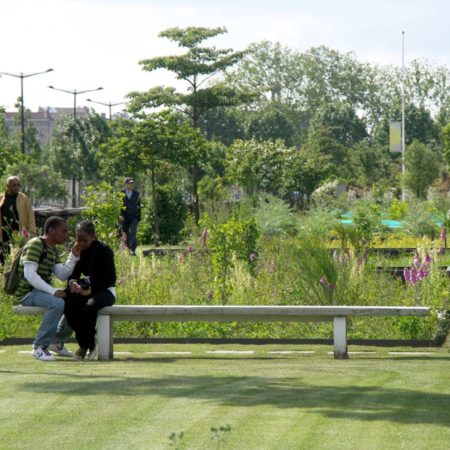 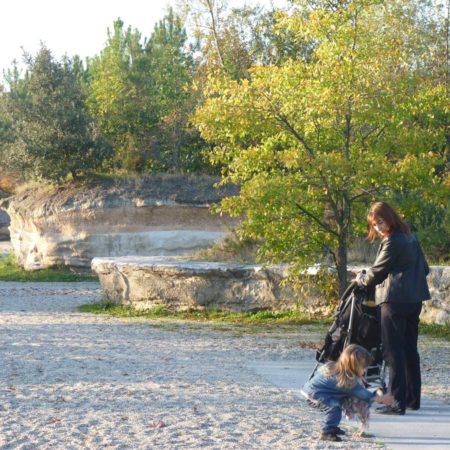 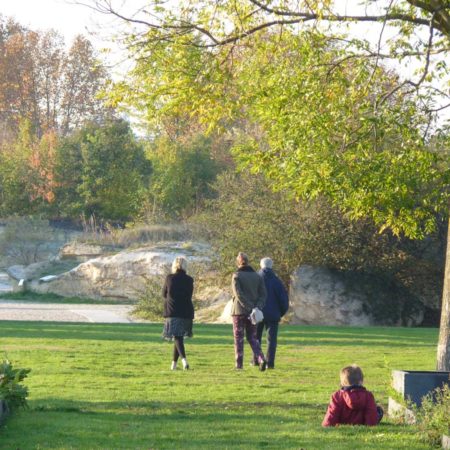 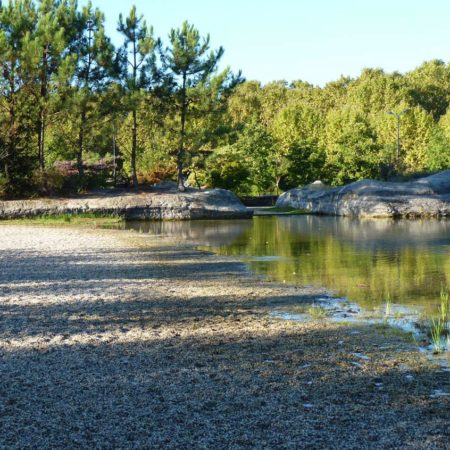 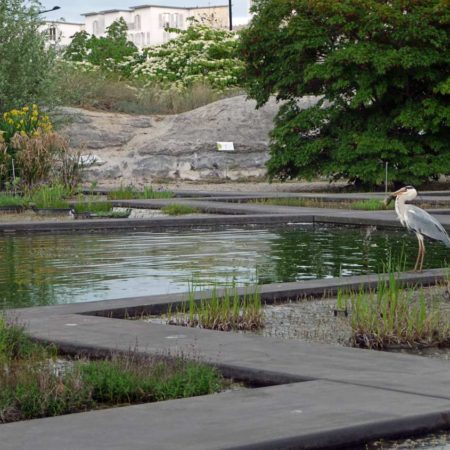 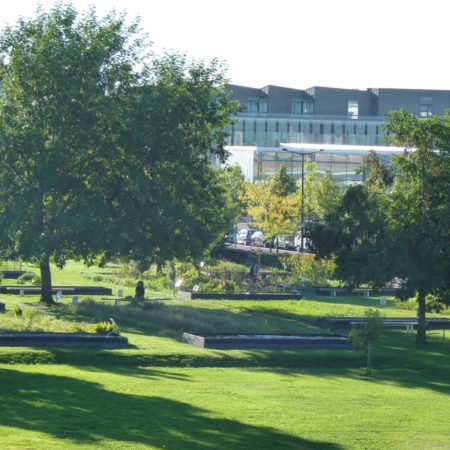 While botanical garden throughout the world seek to outdo each other by the quantity of plants collected or the strangeness of the natural phenomena presented, the Bordeaux botanical garden introduces the additional dimension of landscape as cultural heritage.

It is not merely a question here of botany or ecology, but of opening up people’s minds to landscape in so far as landscape attests to temporality and continuing change, thus referring them to their own temporality in their relationship to the world.

Spontaneous access to this world of the imagination is for us the main subject of this garden: it allows the visitor to appreciate the relation between an urban environment and its territory and actually demands that, we as landscape architects be creative in our handling of this relationship of distance.

The botanical garden of Bordeaux opens up a sensitive experience of his own content, and in the same time a public space for urban events, exhibitions on work of art and educational event. 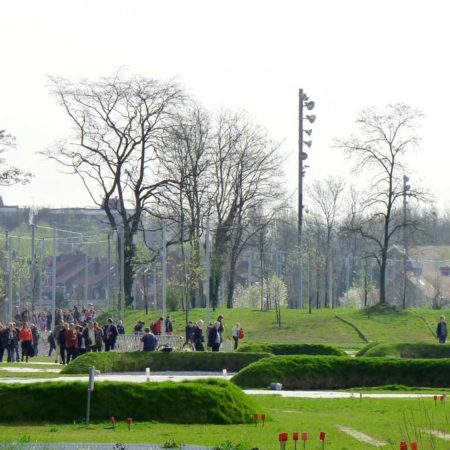 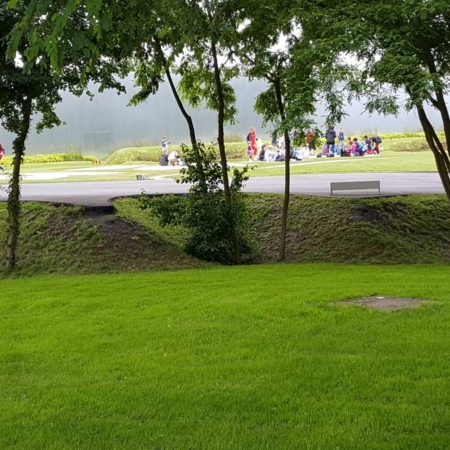 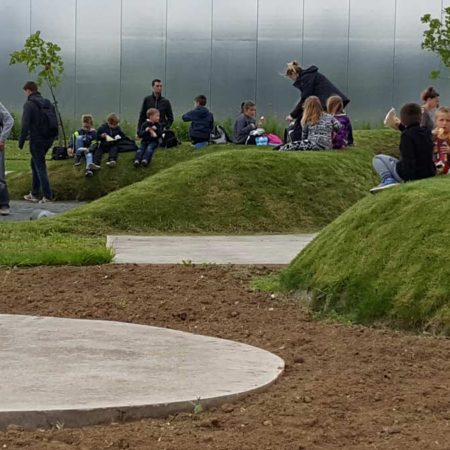 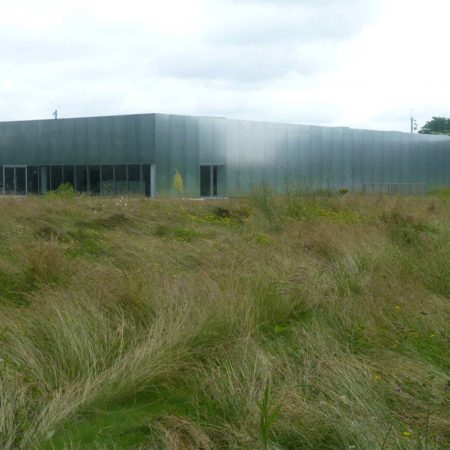 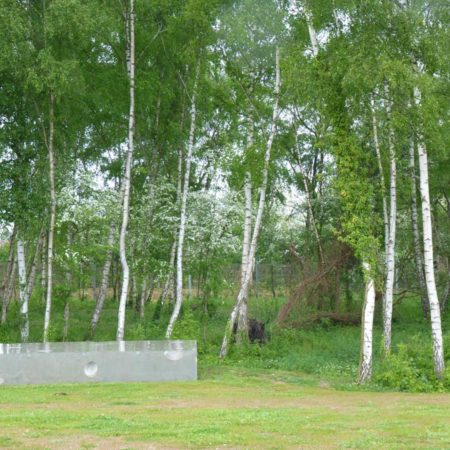 The Louvre Lens develops the concept of museum-park that combines art, architecture, landscape, nature and urban history. The installation of the Louvre museum on one of the pitheads means having the capacity to change over from economic production to an economy regenerated by a way of inhabiting and revisiting the memories of an area in contact with the memories of art and culture in the broad sense. This project addresses the question of compartmentalizing and de compartmentalizing what pertains to the realm of art, architecture, landscape, economics and history. The Louvre Lens project restores the disturbed link between skin (recording surface) and depth (resource of yesterday and tomorrow). It opens the door to future ages by introducing the arts as mediators of all the ages and as bridges to new mentalities. The project outline the challenges of a programmatic content (triggers of active memory), the space strategy of a cultural facility (park-museum) and potential landscape events (extended Louvre park). 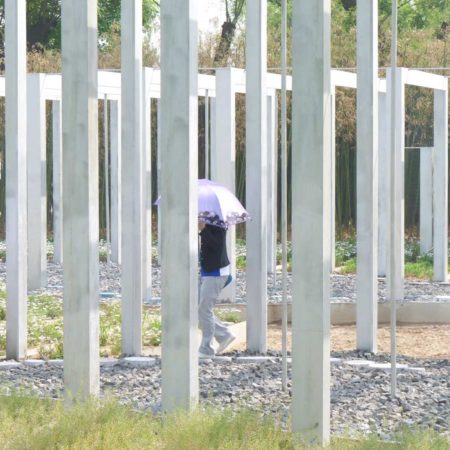 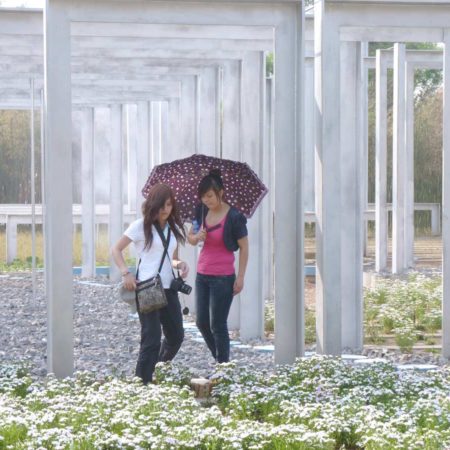 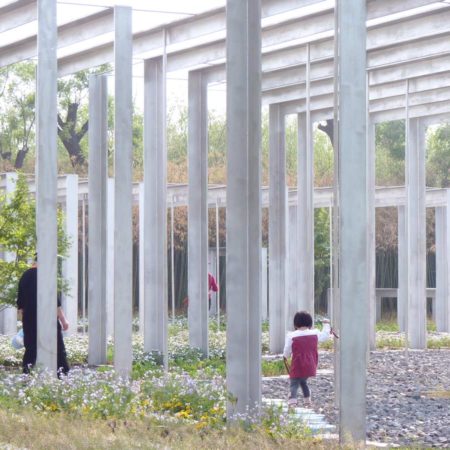 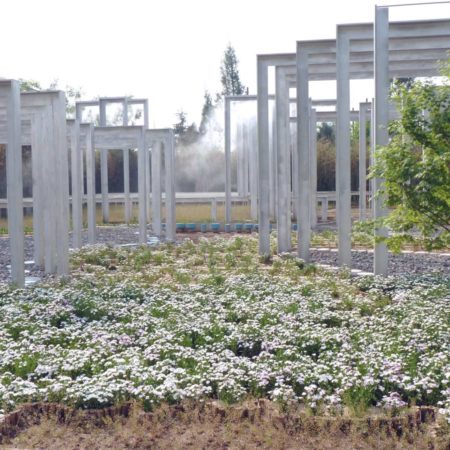 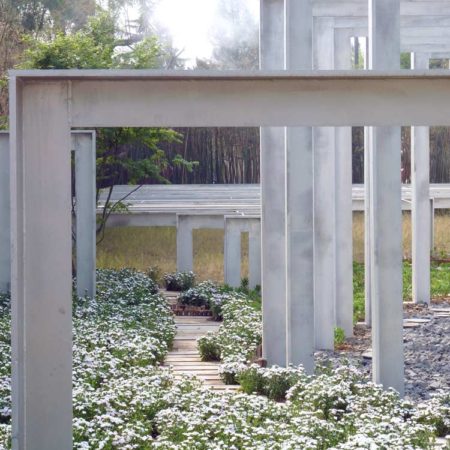 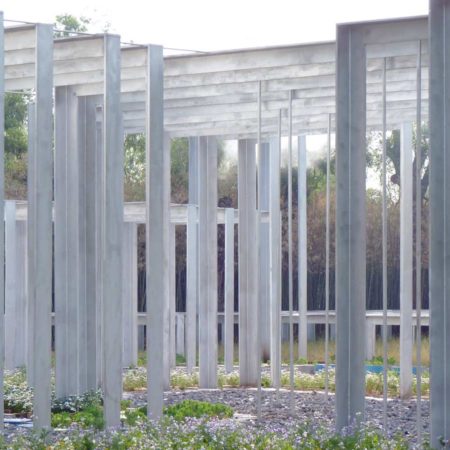 XI’an Shan Shui proposes a translation of traditional motifs of the art of gardens in the enlarged context of this vast ecological corridor where the international horticulture exhibition IHE 2011 takes place. The traditional Chinese landscape painting is designated by the term Shanshui, which is a compound of the words mountain and water. Mountains and water are the focus of the art of gardens in china, sounds clear so much they are pregnant.
According to the percept of the grand imperial parks -miniaturized landscape inspired by big remarkable natural huge sites, showing the essence (the soul) of the object rather than its appearance- we retained for this garden a 3D pictogram with the outlines of the country and its ten main rivers transposed by opened lines. The composing grid is a web of linear structures, referencing these infinite linear works present everywhere in the territory and in the history of this country in the way of wandering the grand natural sites or of protecting. The garden takes shape in this series of profiles from where the visitor, discovers singular apparition according to the seasons: naked profiles overhanging naked soil, flooded profiles in the vegetable mass of the year. The contrast and its modulation -broad and narrow, dark and light, dense and airy, vertical and horizontal follow, mix- are thus the basis of creating different points of view.

THE OTHER SITE, QUEBEC, CANADA 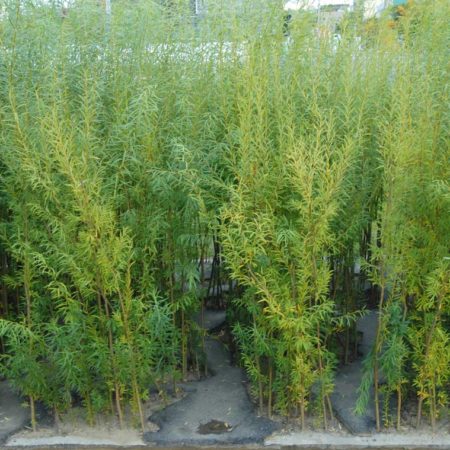 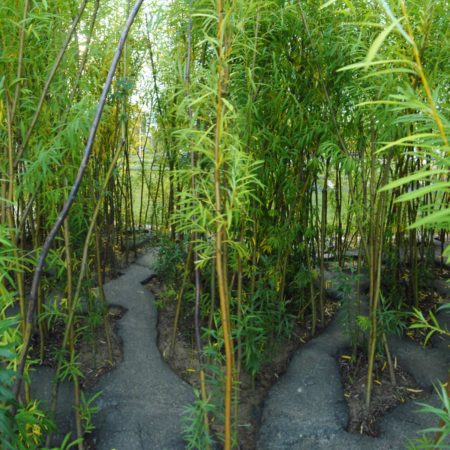 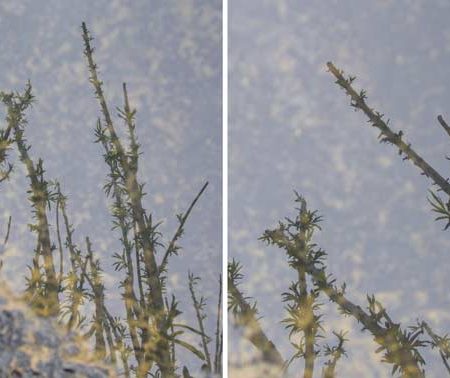 The framework of this garden filters the other bank from cultivation. The word cultivation literally means the task of preparing the given soil in order to settle in the strains. It is also employed figuratively to mean of make appear that that is not given in advance : color range of light prisms, flexibility of wood, intensity of the sap, luminescence of the leaves, softness of catkins, polymorphism of a soil, energy of light. The framework demarcates, but deploys at the same time the perceptions, accentuates a motif and its base. It permits visitors to appreciate the vigor of this pioneer plant, with a shoot of 2 meters per season, and its capacity to create an intimate space and games that favors spontaneous appropriations of populations.

The script is a macroscopic transcription -arsenopyrite- at the same time as a cartographic evocation -archipelago-shore. The soil, surface of recording, differentiated from the earth’s crust by the presence of life, is re transcribed here as an asphalt skin- that comes from or that is formed by vegetation fossilized in swamp water, and then mineralized.

The plants erect their stalks of the marker year with a vertical vigor in terms of which the leaf springs. The plasticity of the stalks works the margins between liquid and solid, between inert and living, between light and color. 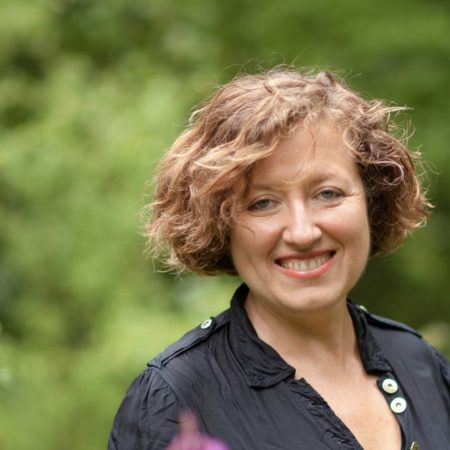 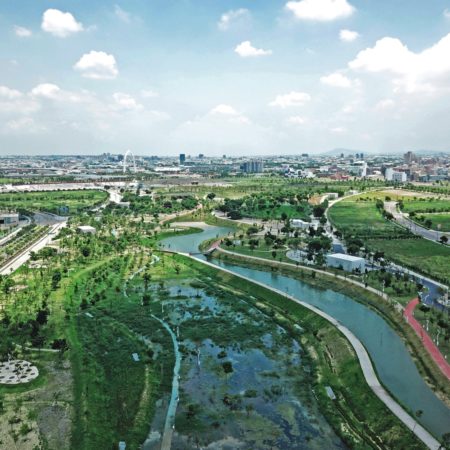