MTD landscape architects is a design agency for the outdoor space in the broadest sense. The office is working on plans for both the rural and urban areas; on various scales. The projects concern urban tasks such as squares, streets, urban development and more landscape oriented tasks such as parks, estates, commercial landscapes and infrastructure projects. More often, the assignments increasingly concern innovative, strategic plans, in which coalitions are forged between multiple commissioning parties.
Clients are governments, developers, companies, institutions and individuals.

MTD is an agency with a history. In 1954 Pieter Buys established himself as a landscaping architect in ‘s-Hertogenbosch. In the first few years there was a partnership which included Hans Warnau and Bob van der Vliet at the agency Buys & Van der Vliet. In 1998 the agency was continued by Frank Meijer, Han Thijssen and Ruud Dubbeld under the banner of MTD landschapsarchitecten. The agency is very aware of its heritage.

The design style over the years can be described as robust, clear, inevitable and timeless, in which the general outline is confirmed by way of carefully elaborated details; designs are functional and have a wealth of unexpected usage possibilities. MTD aspires for designs which lead to a flexible, surprising and almost unsuspecting usage. The ‘genius loci’, the characteristic spatial features and history of the development of a place, make up an essential source of inspiration; this provides the plans with a sustainable base and strong place-related identity.

The design style over the years can be described as robust, clear, inevitable and timeless

Sustainability plays a decisive role within the firm’s designs. In the first instance, it concerns strengthening the green qualities of the public space and roof landscapes. But it also concerns shaping climate adaptive measures, where these are related to planting and water management.

The agency consists of an interdisciplinary composition; urban planners, landscape architects, ecologists, spatial designers, communication experts and civil and cultural technicians work together in compact teams. Choice of materials, technical details and budgeting play an important role from the start of each project; this is how integral and achievable plans are created. This is how market-oriented and feasible plans arise. We work with a clear assignment formulation as a starting point and a clear, broadly supported vision as the end result.
The agency has extensive experience with participatory and interactive communication processes and with the use of social media within these processes. The planning process is conceived as an organic process; local knowledge and expertise of residents, entrepreneurs, stakeholders and municipal experts are deployed at an early stage of the planning process, thus creating broad support for the plans.
The organization and working methods of the office guarantee continuity, development, innovation and quality of the plans and advice through, among other things, an internal quality system (based on NEN-ISO 9001) that is laid down in the MTD landscape architects Operational Management Manual. With regard to organization, this means a structure and composition of the office, within which tasks, responsibilities and qualifications of employees are clearly defined. Within projects, this means, among other things, that final responsibility always rests with a project leader and that, depending on the scale, scope and complexity of the assignment, work is carried out in a compact, interdisciplinary project team.

MTD landscape architects has a clear vision for the future of the agency. The development of a young and dynamic team of independent consultants, trained on the basis of the agency’s traditions. In this, the agency aspires to contribute to a spatial environment which is beautiful and sustainable, in which people can live comfortably and which is resilient to the changes and challenges of the future. 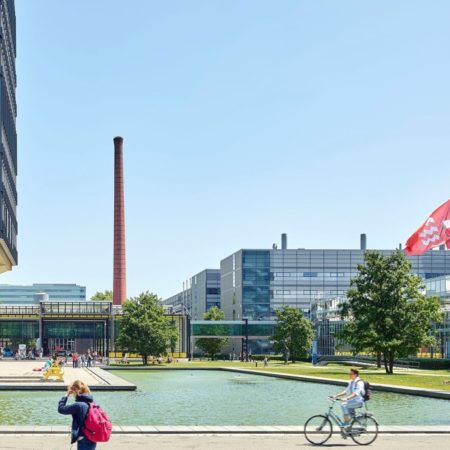 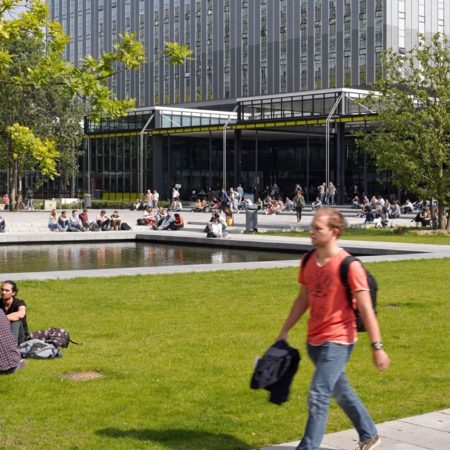 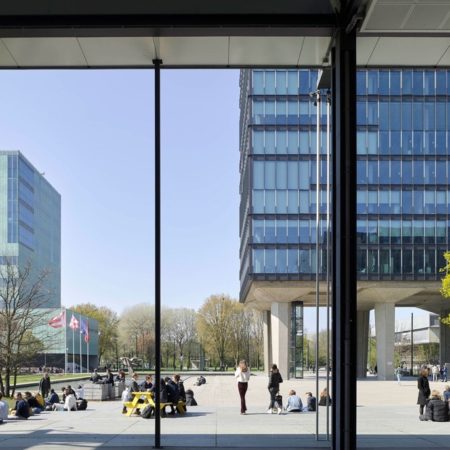 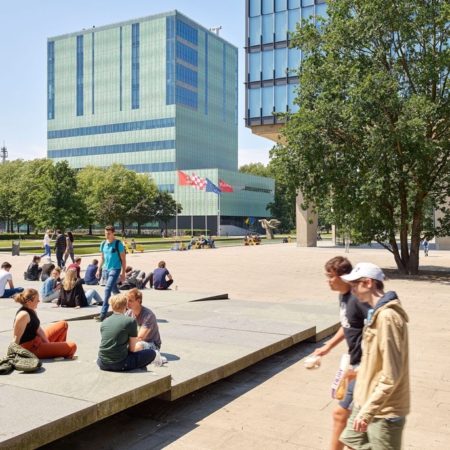 The University of Technology Eindhoven (TU/e) was aspiring to refurbish their campus into a ‘TU/e Science Park’ of international stature’. To this end the university buildings had to be concentrated in a compact campus and space had to be created for other schedules. The original urban development and architectural plans by S.J. van Embden, were conceived as important starting points for the design for the new campus. They represent exceptional culture-historical values and express the Nieuwe Zakelijkheid in everything.
In 2011 MTD landscape architects and urbanists was selected to draw up a development plan for the new campus and the Groene Loper, the main image carrier, which included detailing the specifications and supervision of the implementation. The primary strategic aim of the plan was to zone the area in terms of traffic; the Groene Loper was converted to primarily facilitate slow traffic. For this purpose the so-called ‘scenic walk’ was introduced, starting out in the scenic Dommeldal and connecting the main building to the new Faculty for Applied Physics and Electrical Engineering. The second strategic aim was to put the primary focus on the user of the campus. The layout of the scenic walk, offers all kinds of reasons for its use and inspires students and teachers to encounter one another. Aside from being a culture-historical and distinctive element, the pond at the main building, forms a meeting place and offers an ideal spot to work and lunch. 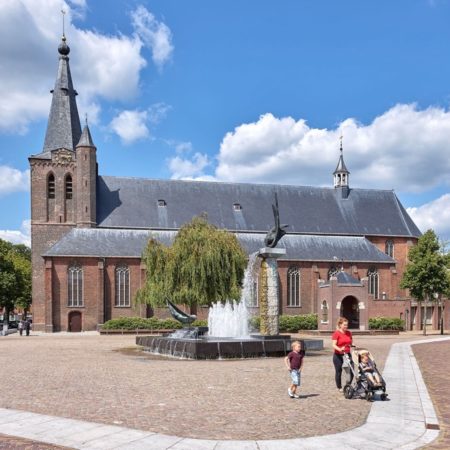 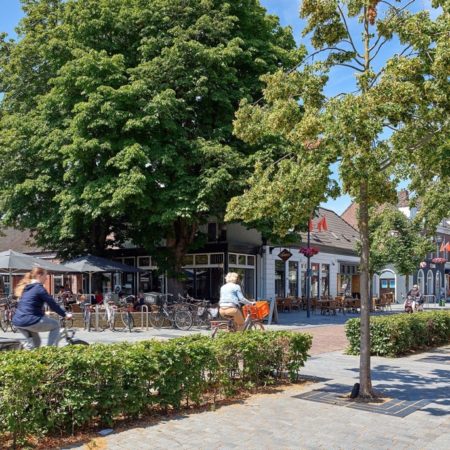 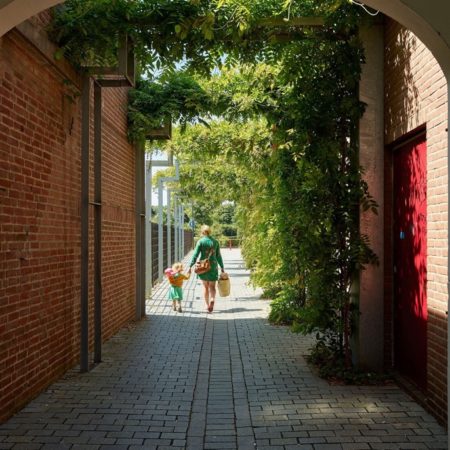 The municipality of Schijndel has the ambition to upgrade the public space in the village core. An important step hereby, was the decision to pedestrianise the village centre and to transform it from traffic area into habitable area. All this was strengthened by the introduction of a new pavilion after design of Winy Maas / MVRDV architects at the central situated Market square. In 2007 MTD landschape architects and urbanists was commissioned by the Municipality of Schijndel for the redevelopment of the Market square, the surroundings of the glass farmhouse and the two most important shopping streets of the village.

The initial strategic goal of the redevelopplan was to relocate the parking from the present Market square to the direct vicinity of the shopping area. By way of shortcuts, so-called alleyways, those new parking lots were directly linked to the city centre. The Market square is kept free from unnecessary obstacles, to facilitate the weekly market and various events. Activities that have an important meaning for Schijndel and the whole region. The second important goal of the redevelopplan is to enhance the rural and villager identity of Schijndel. The glass farmhouse is a contemporary addition and refers to the agricultural character of the village and provides space to new commercial program on the Market. It’s a scale model of a typical Schijndel farmhouse enlarged 1.8 times. The design of the farm yard, by MTD, enhances this by an also oversized scale. 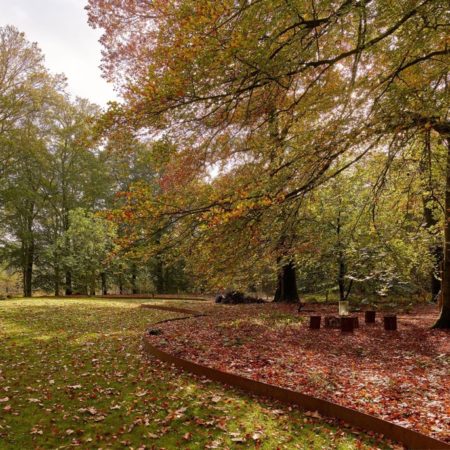 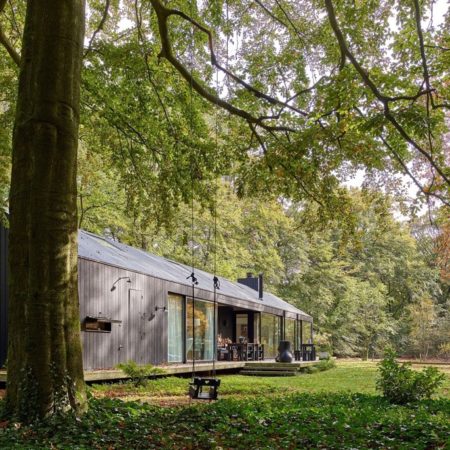 In the spring of 2014 Mr. and Mrs. van Esch obtained the foresters cottage situated in the Oisterwijkse Vennen in Oisterwijk. They had the ambition to redevelop the location and build a forest house. MTD received the assignment to develop a plan for the situation and garden of the forest house, in close collaboration with the architect Jacques de Brouwer / Bedaux & de Brouwer architects and the interior architect INA MATT.
The forest house consists of a longitudinally stretched volume, comprising a single floor with a pitched roof. The orientation of the house maximizes the view onto the pond of the Brouwven using an open end façade. The volume is materialized in black painted wood, using a more or less closed side facing the forestlane and a side with maximum openness facing the garden side. The building is anchored to the site using a concrete plinth that in 4 places by stairs is connected to its surroundings. As a differentiation near the front door a round hole has been spared in the plinth in which a Robinia grows.
The plinth forms the transition from inside to outside; from house to forest landscape and widens itself in several places creating unique terraces. At first the terrace at the head of building; facing south, from which one has an optimal view onto the Brouwven. A more private terrace is situated at the west side of the house. Here there’s an opening in the façade, from where one can enjoy the views onto the forest and fen in the evening sun.
Entrant name: MTD landscape architects and urban designers
Award category: Office Profile Office Profile