The original late 19th century Amsterdam Oosterpark design by L.A.Springer was actually never finished. As a result, the southern part was a landscaped neighborhood park with lawns, a pond and groups of trees. However, the poor quality northern half did not align the southern half. This part was struggling with vacancy and decay and had become an inaccessible and unattractive area. In the southern part, the elongated pond had unintentionally become a dividing line.

Amsterdam Oosterpark was once conceived as a urban park but no longer met the current standard. In addition, major maintenance for the park is also under discussion. Contemporary use of the park required the convenience for walking, meeting and staying, but also accommodating play and sports, catering facilities and events. The assignment was to make the historical park one coherent whole, with respect for history and monumentality. Moreover, the ‘doubled’ park must be suitable for use and functions of the present and the future: a multiplication of the number of visitors, sports and events.

Buro Sant en Co’s design approach was to change the condensed orthogonal structure of the northern part into an open, scenic signature that fits the southern part. This included, among other things, the construction of walking paths and sports and play areas, the making of sightlines and the removal of fences and planting. 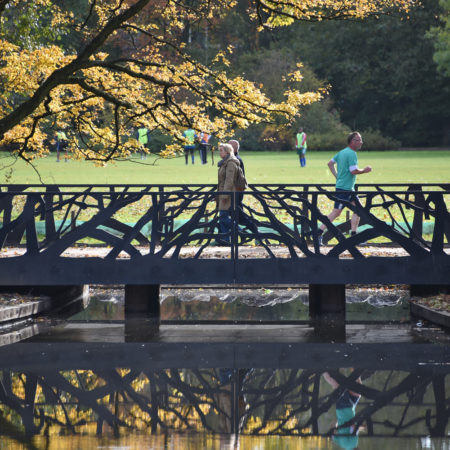 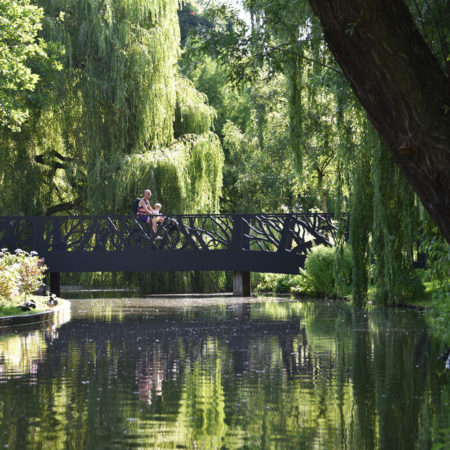 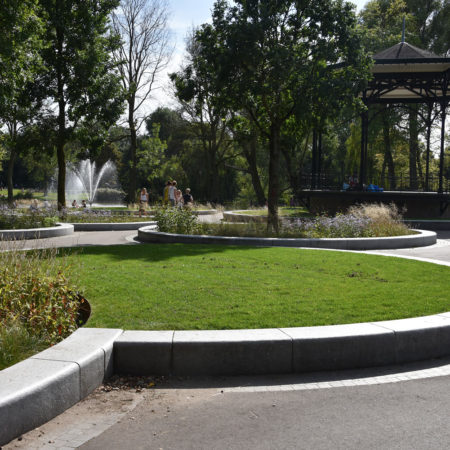 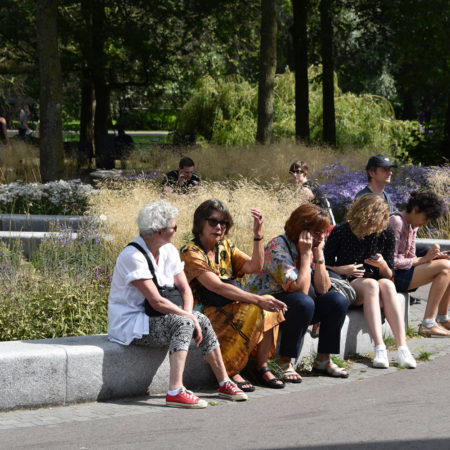 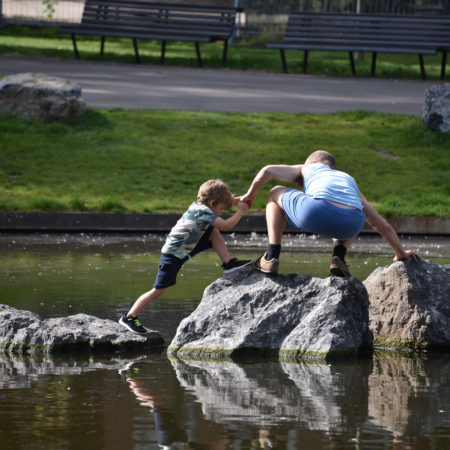 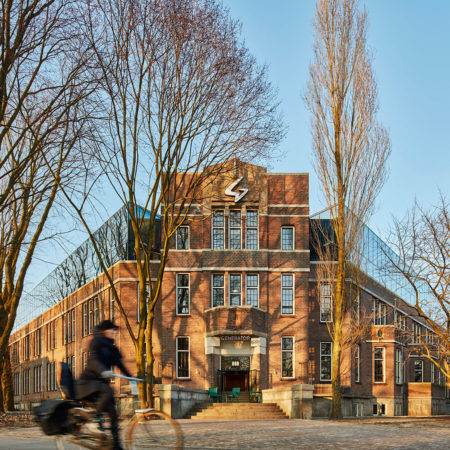 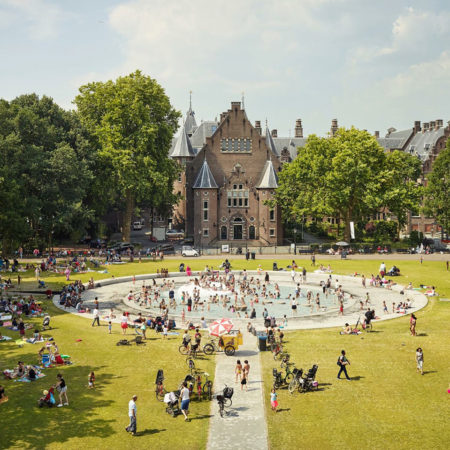 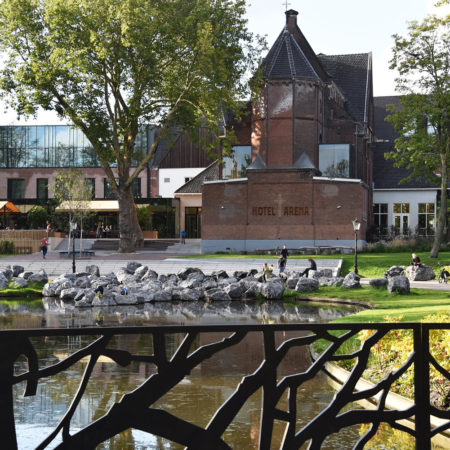 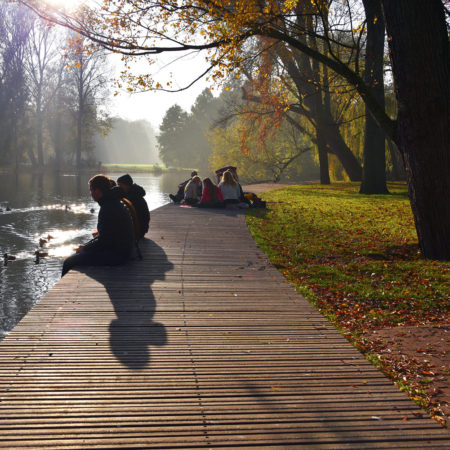 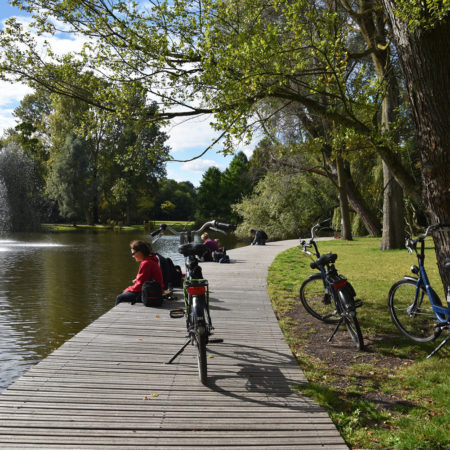 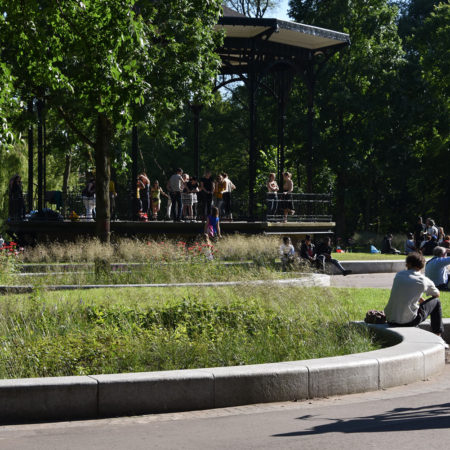 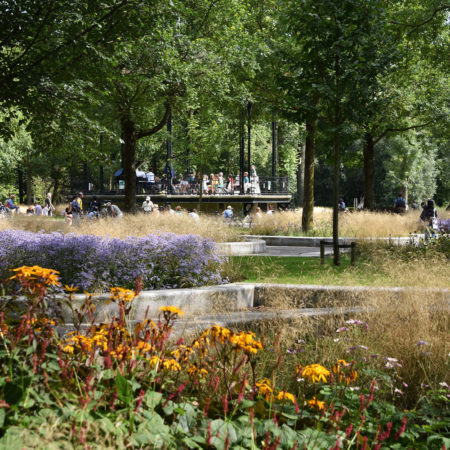 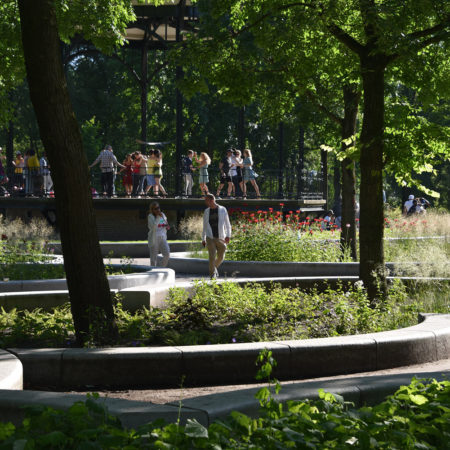 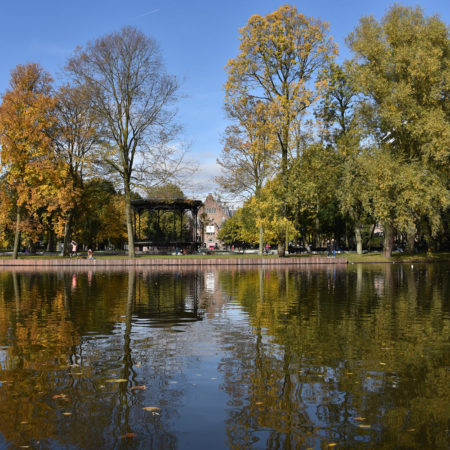 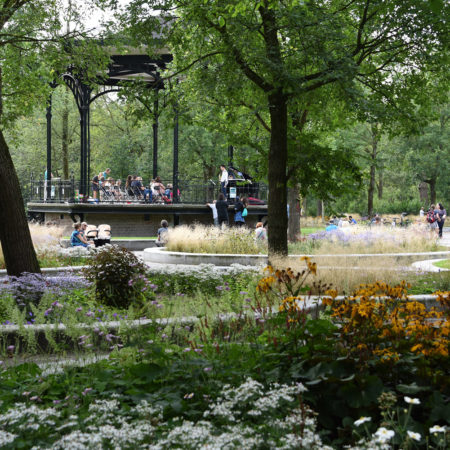 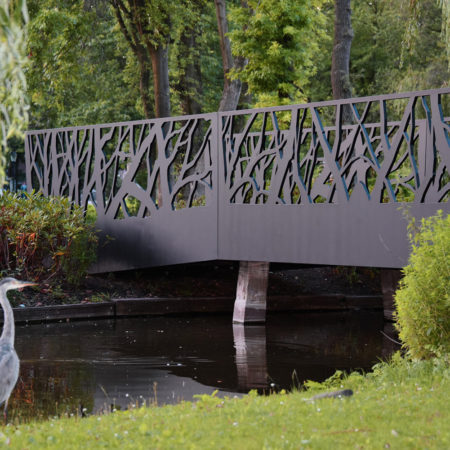 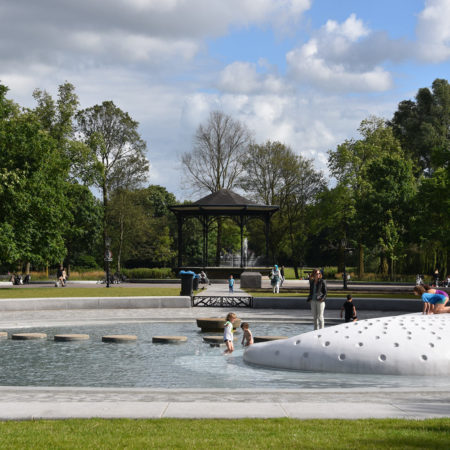 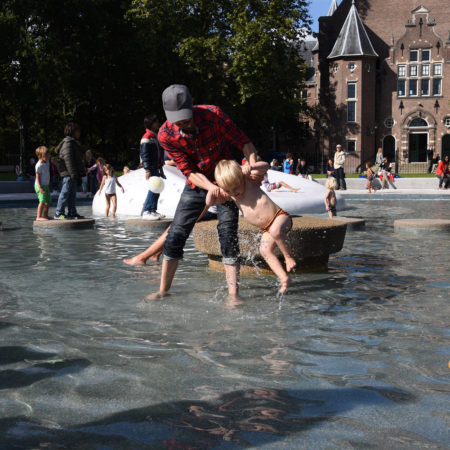 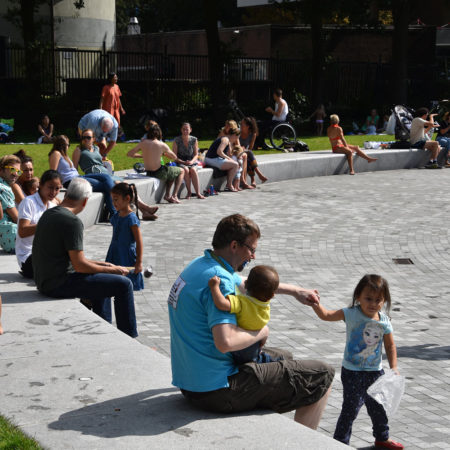 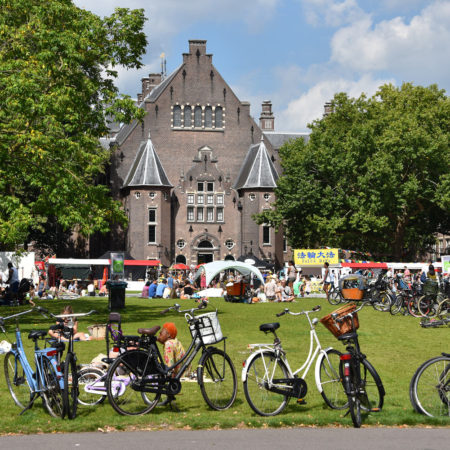 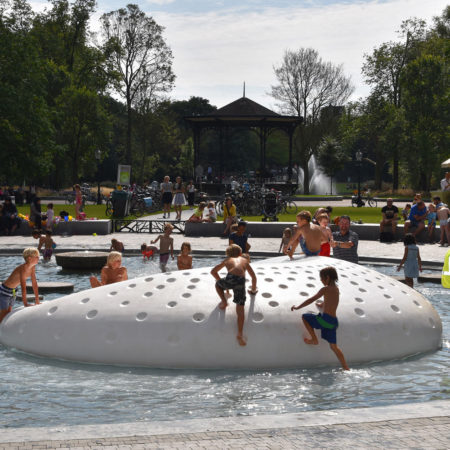 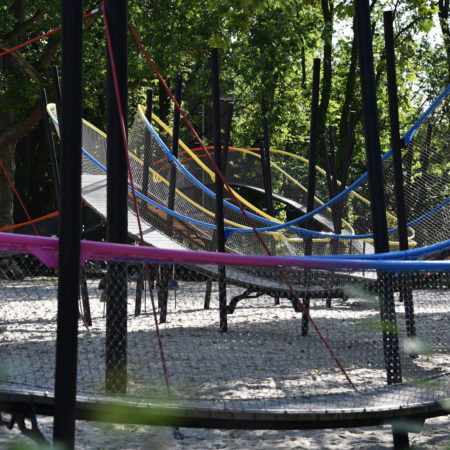 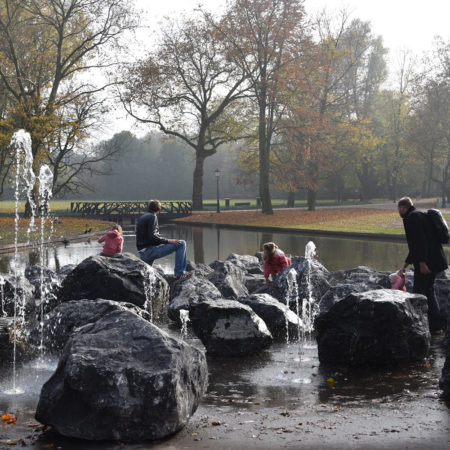 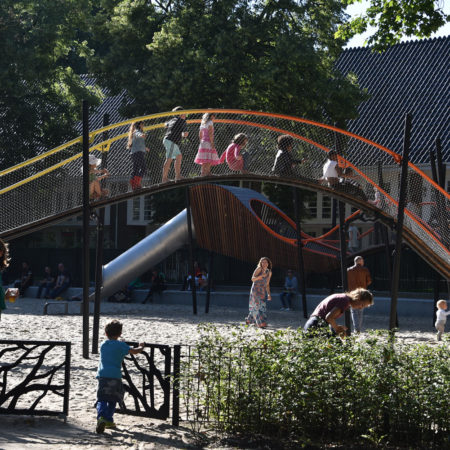 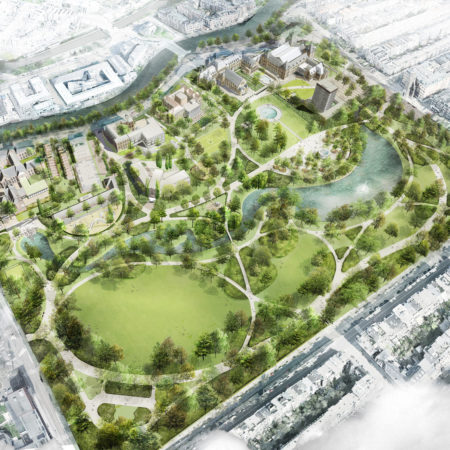 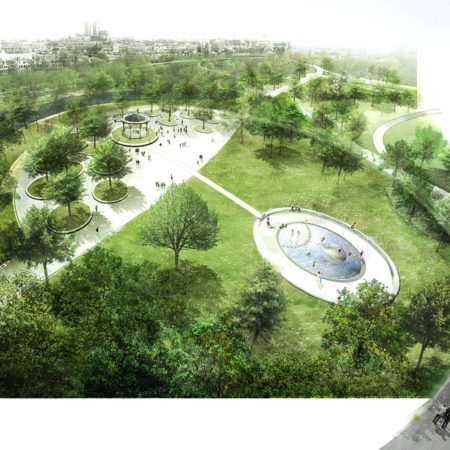 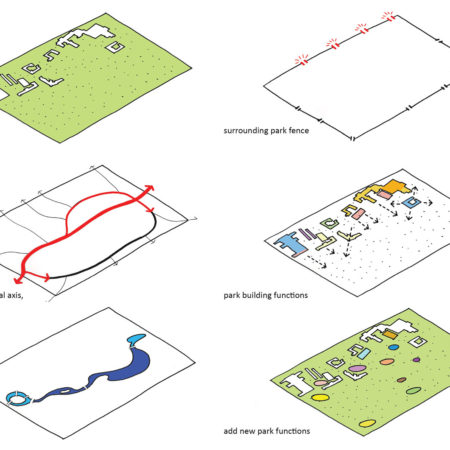 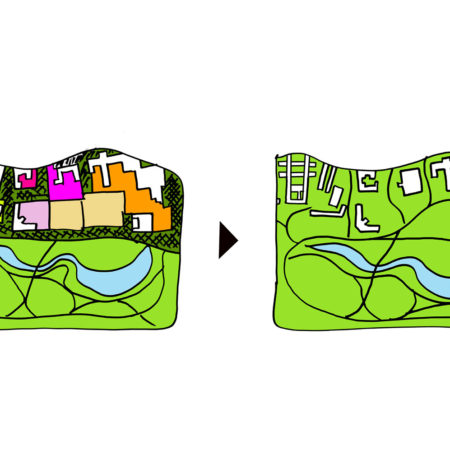 The northern part of the park contained a series of monumental, partly empty buildings that were more or less with their backs facing the park. These were private buildings in enclosed plots, including the Tropenmuseum, the Arena Hotel and former Amsterdam University properties. to Landscape improvements gave reason to create building fronts facing the park. (‘redirecting’ the building). Now, these monumental buildings have contemporary public functions in hospitality, societal service (daycare, school, playgrounds), cultural functions and events. These functions create more interaction between the buildings and the park.

“I see it as a challenge to intertwine old and new in such a way that the charm of an old park is preserved, while it accommodates many modern functions.”

The park adjustment itself also generated a programmatic renewal from private gardens to public park. The fenced off gardens have become public park landscape. Playground elements were added and sports are now accommodated. The water course has been extended causing a larger water surface functioning as a water buffer. An element (‘the Source’ ) has been added enabling children to play and climb. The ‘source’ element generated water circulation improvement. Unlike the former character of a border, the water now creates sheer binding between the old and the new and forms a central element in the park. Exemplary transitions are the Hotel Arena and the former ‘Openluchtschool’ that are now visible from the park.

Using new shapes (circular Micky Mouse ears) contributed to recognizable placemaking. On the east side a leafy event square the old music dome and the existing trees make a perfect rest and meeting place. The existing elms and new trees have natural stone edges for taking seats. From this square, the axis of symmetry between the music dome and the Tropeninstituut has been made visible again by means of a straight path, with halfway a circular water playground, the so-called Pierenbadje.

The redesign of the park is almost accomplished. In the coming period, the last building will have new park-related functions and the space around it will be made public and added to the park. This process is in full swing and will become increasingly visible in due course. Sant en Co has worked in collaboration with six architects of the various buildings on the interpretation of this outdoor space. For example, Sant and Co in collaboration with Team V architects, designed a new Hotel Arena front at the park. Also, the realization is in full process to connect the back of the Tropeninstituut with the park.

Unlike the past, nowadays designing a public park is not the work of the designer only. We cooperate with professionals conducting historical research and analysis. The design team greatly adheres to deploy community consultation. Community participation is unmissable in exploring the needs of the public. “Especially in the redesign of old parks. Local residents and users love their park and can provide valuable information. It is their living environment, their collective front garden. Almost nobody in this area has a garden here, at most a French balcony.”

The Oosterpark has been polled for two years: every six weeks Buro Sant en Co designers discussed with neighborhood residents and took them step by step into the design. It was a participation process that the municipality attached a great deal of value to. The large public support for the refurbishment plans was a decisive argument for accepting the plans in the city council in November 2012.

It has become more than a park design. It has hugely improved the functional value of Oosterpark as an urban space.