This project is situated in the foothills west of Healdsburg, CA in Sonoma County. Over two and half acres of the twelve acres were transformed into a new residence for the client. Elevated above Dry Creek Valley, the site has views of the majestic hills to the west and picturesque vineyards to the east. The hills are covered with heritage forests including groves of coastal redwoods, native oaks and douglas fir trees. The landscape architecture team conducted an in-depth reading of the existing site to begin the design process for the residence. The reading served as a framework to guide restraint, to make informed edits and to amplify the unique quality of the regional California landscape. The residential architecture, landscape design and site layout were linked through thoughtful planning and a shared design language that blurs the boundary between indoor and outdoor spaces.

The clients, a couple with grown children, wanted a retreat where they could relax, cultivate food, grow flowers, and be surrounded by the beauty of the regional landscape. They brought the landscape architects on as the first collaborators for the design of their new residence, demonstrating their commitment to working with and honoring the existing site. The landscape architecture team conducted an on-site analysis to determine the desired sight lines, existing water flows, wind direction and solar aspect. Informed by the initial analysis, the landscape architects proposed siting the new architecture on the existing meadow. The buildings would be oriented on a east-west axis to take advantage of the the key sight lines, solar orientation, and to ensure the preservation of valuable existing trees.

Drainage was a critical issue in the existing meadow area where the building would be sited. During heavy winter rains the runoff from the main road flowed down into the depressed shape of the meadow. To alleviate the accumulation of water and saturated soils, swales were added along the road to direct the water away from the future foundations of the buildings. The runoff then flows into a network of bioretention basins that allow the water to percolate and recharge the local groundwater. In addition, the grading plan for the garden and building platforms balanced cut and fill, which prevented any off-haul from the site.

Drainage was also addressed in the auto court that serves as the primary entrance into the inhabited portion of the site. It is surfaced with permeable crushed stone to allow for infiltration of excess runoff from the street. Linden trees, low-growing manzanitas, and a medium-height stone wall define the edges of the designed space by echoing the materiality of the buildings and garden.

The group of smaller scale buildings, including the main residence, pool house and guest house, are linked through a series of outdoor rooms and pathways. Low stone walls delineate axial flows throughout the garden and double as integrated seating areas. The main house consists of two spaces, the living area and the bedroom, which are linked by a glass-walled hallway. The transparent hallway is a modern allée, nestled between perpendicular rows of ginkgo trees. Experiencing nature from inside the building blurs the boundary between the indoor and outdoor spaces. Large existing oaks shelter the bedroom and create a private nook for a garden filled with white-flowering currants and western sword ferns.

The lawn and the pool are centered on the main axis of the living space of the residence. A pergola covered with native California grapes provides a transitional threshold between the house and the outdoor rooms on the north and west sides of the main residence. To enhance the outdoor living opportunities a sunken fire pit was placed next to the pool. The fire pit level consists of an open grid of large pavers with Thymus serphyllum ‘Elfin’ filling in the gaps between. The guest and pool houses align with the east-west axis and echo the language of the main residence’s threshold transitions.

The planting design was a critical element in the transformation of the site. Over eighty percent of the plant palette consists of drought tolerant species, which are appropriate for the hot, dry summers in Sonoma. Native species were planted along the edge between the existing forest and the new design. These areas were planted with a naturalistic approach, using large numbers of the same species in drifts and repeating that in different areas. The planting layout near the buildings embraces the linear lines of the architecture. Invigorating aromas from the lavender planted around the guest patio perfume the space.

The site is a living landscape, evolving to meet the changing needs of the clients. The design respectfully responds to and celebrates the surrounding area by seamlessly uniting the natural and built environments. 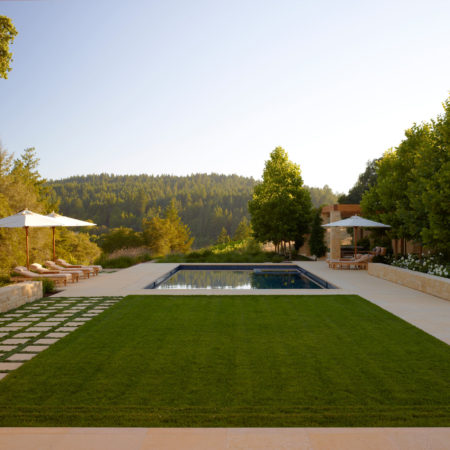 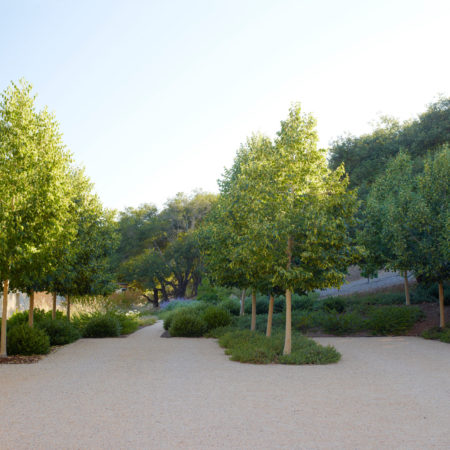 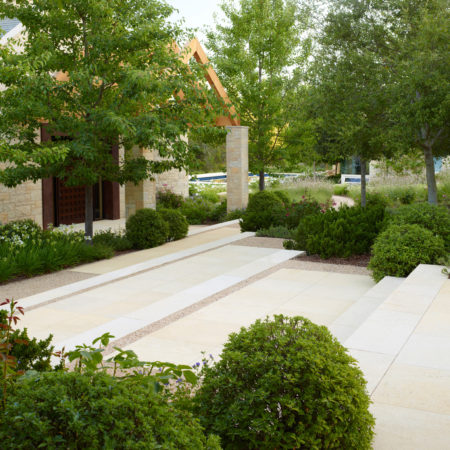 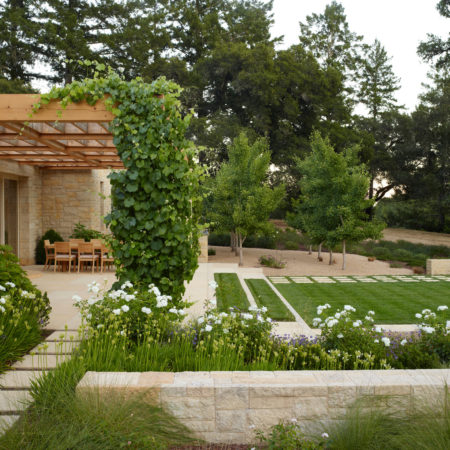 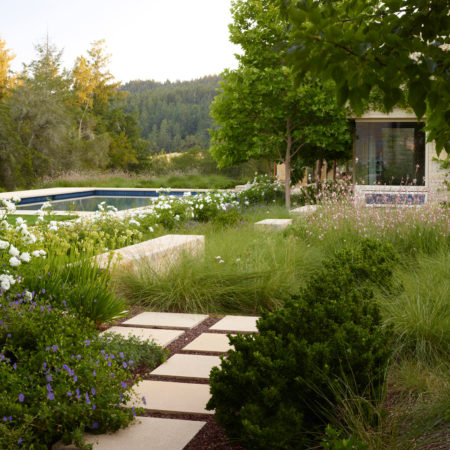 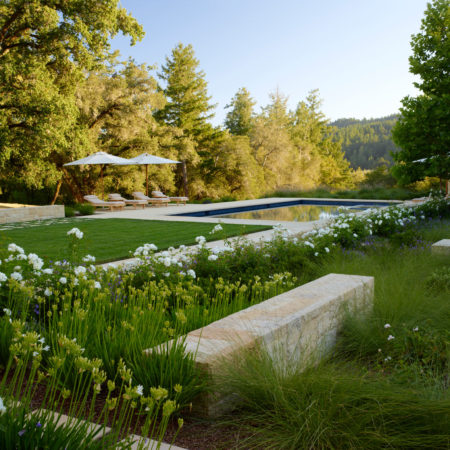 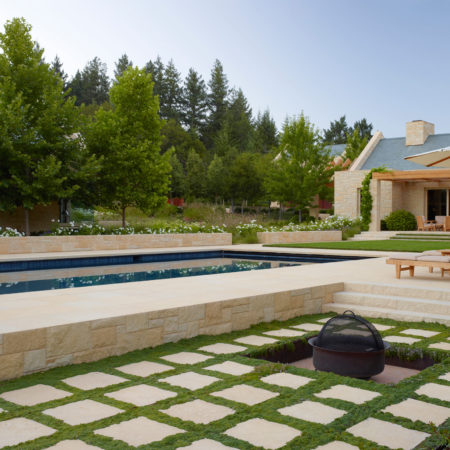 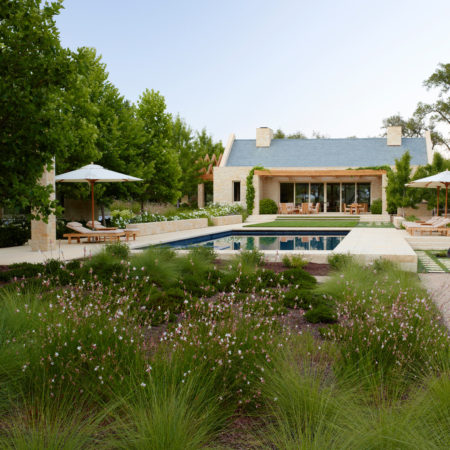 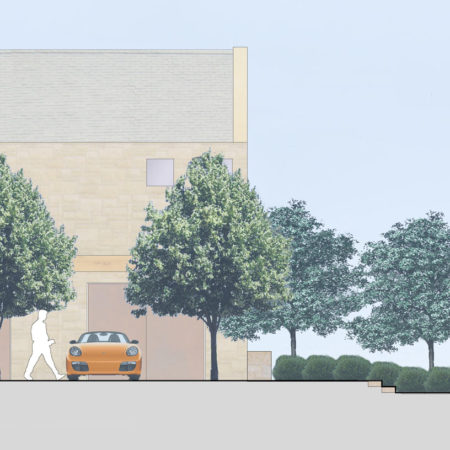 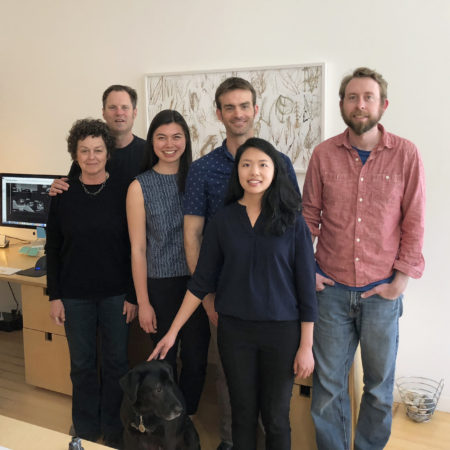