Situated at the base of the Rocky Steps, Eakins Oval is both a chronically underused parking lot and one of the most visited spaces in Philadelphia. In February 2018, PORT was asked by the Fairmount Park Conservancy to help imagine the next phase of their wildly popular Summer at Eakins Oval program. In 2017, our installation asked a simple question —“What’s your Parkway, Philly?”— intended to highlight the changing roles the Parkway and the Oval play in the daily life of Philadelphians. The unprecedented successes of OVAL PLUS in 2017 showed that there was an overwhelming appetite in Philadelphia for free, multigenerational play opportunities. We returned in 2018 to design and install a radical expansion of the summer program with the theme of ‘More Park, More Play.’ PORT’s goal for the entire installation was to not just create a temporary activation of a space. We wanted to emphasize spectacle – through large and unusual objects that interacted with the wind and environment in usual ways – and we wanted to emphasize an open-ended approach to play and occupation that allowed many different ways for the public to interact with the installation. 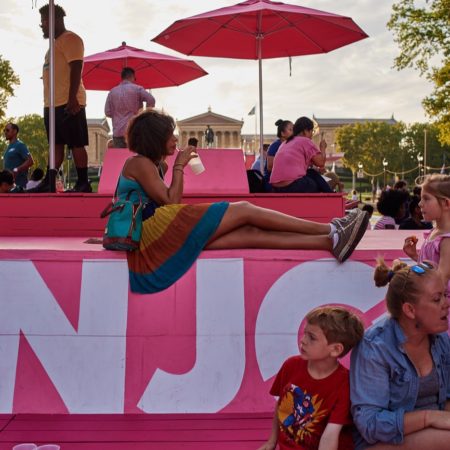 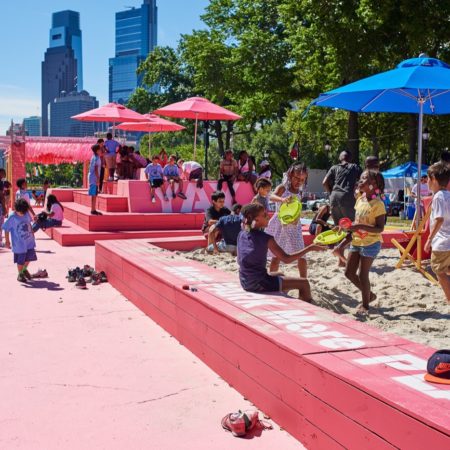 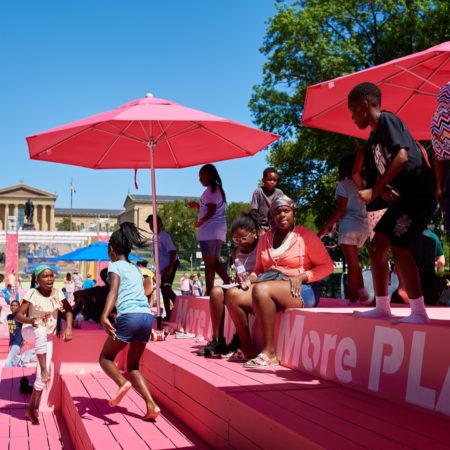 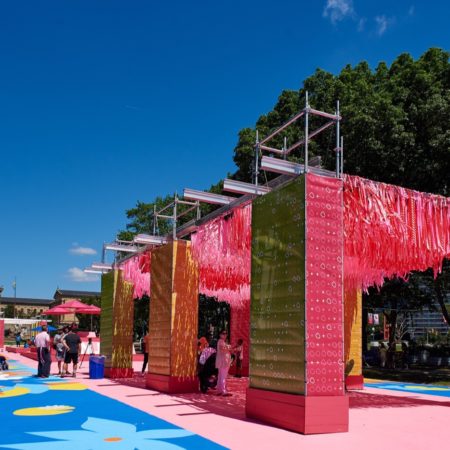 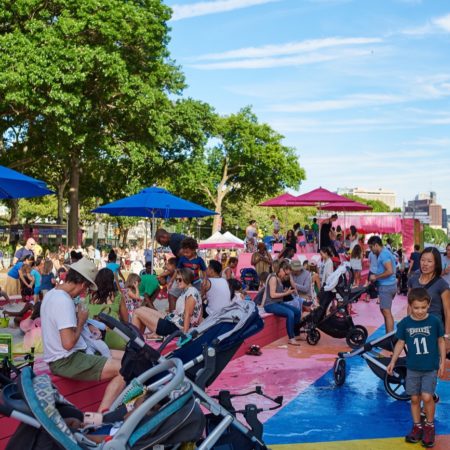 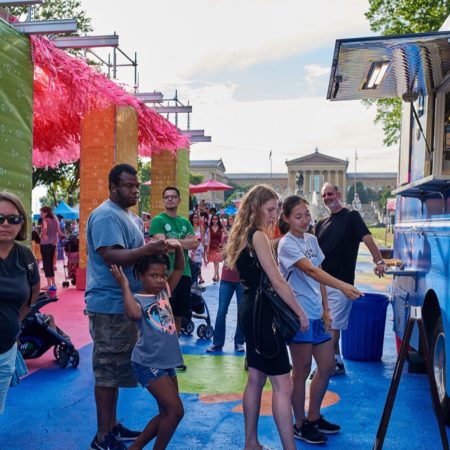 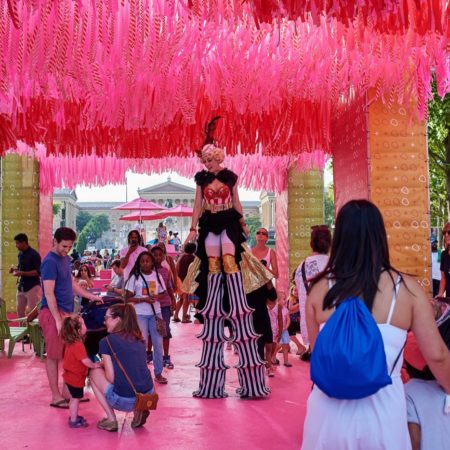 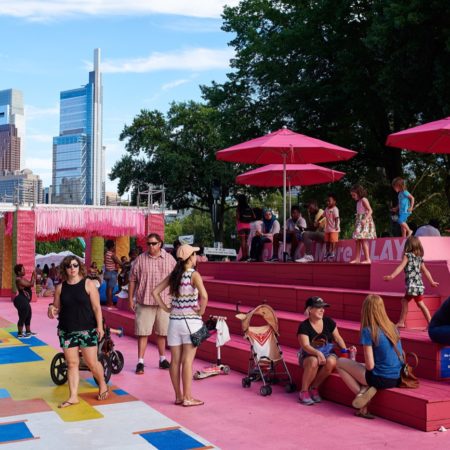 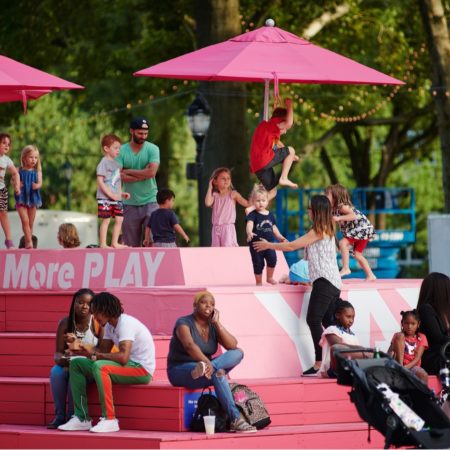 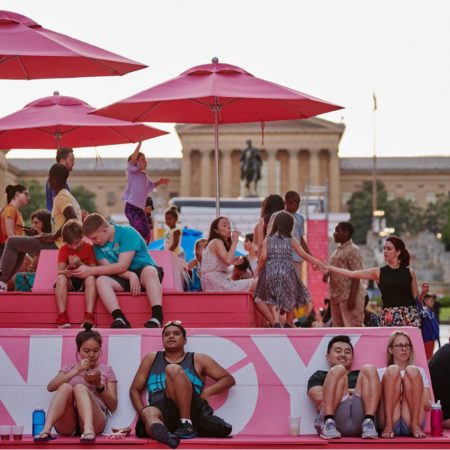 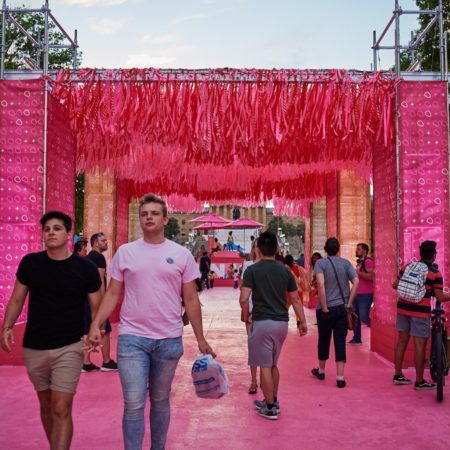 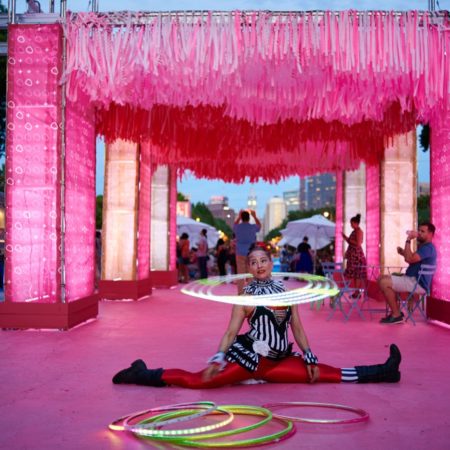 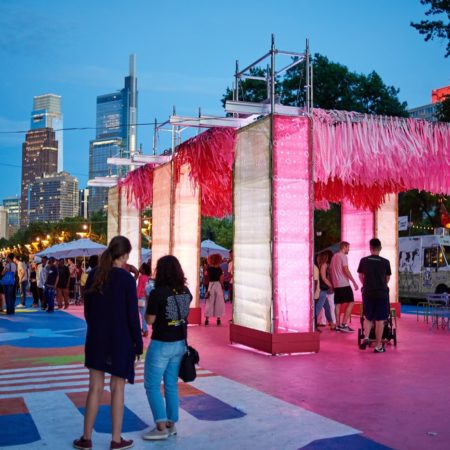 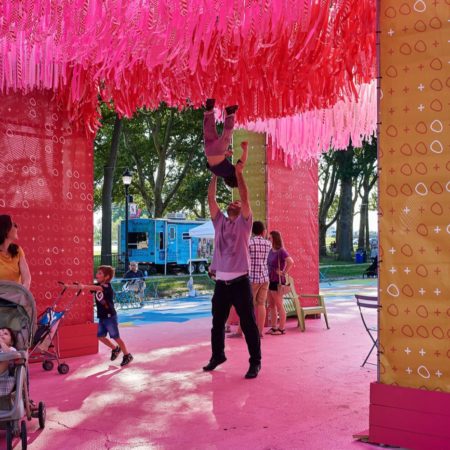 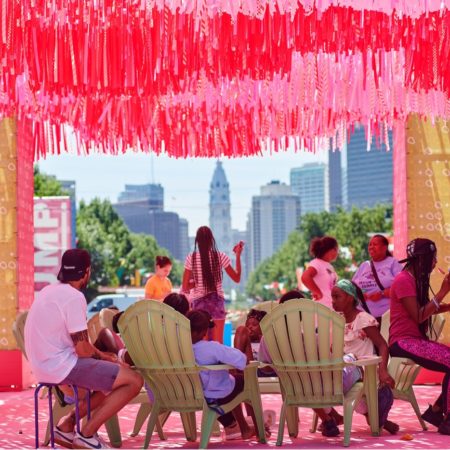 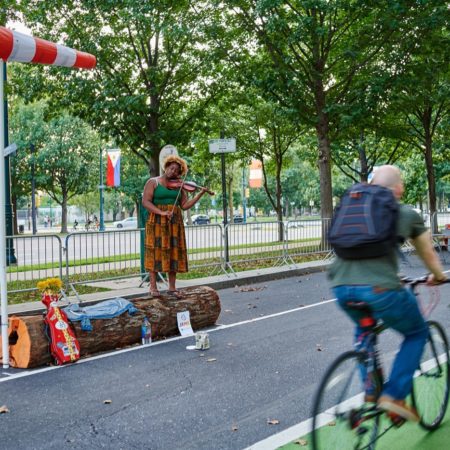 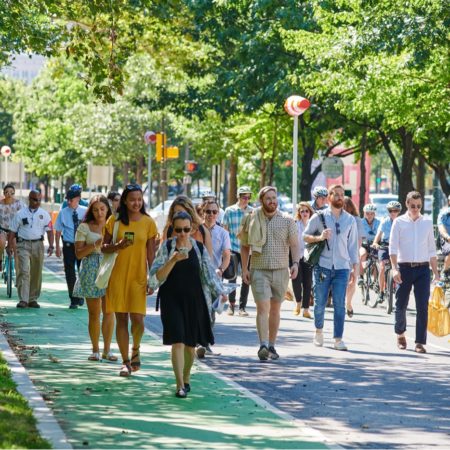 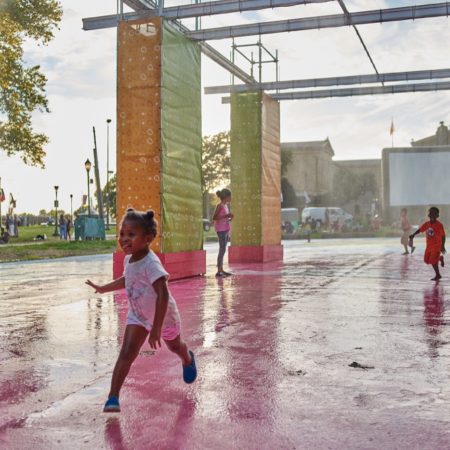 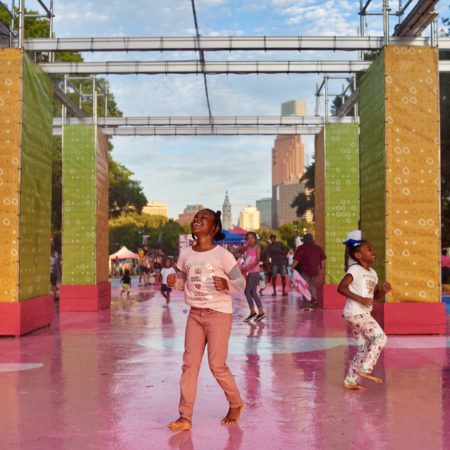 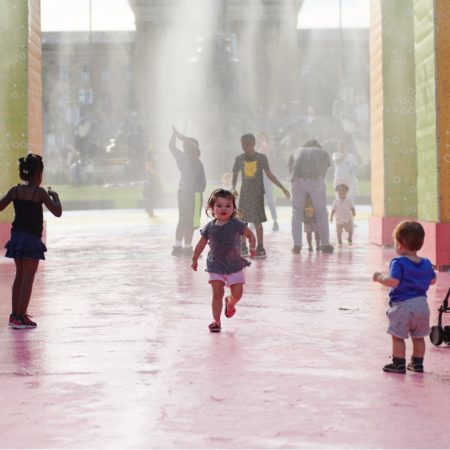 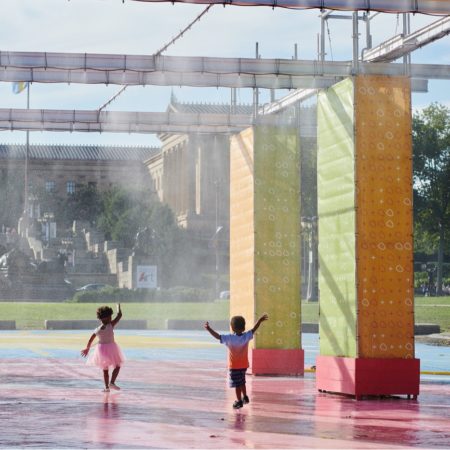 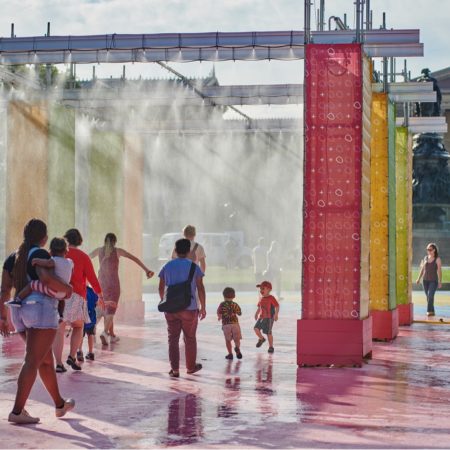 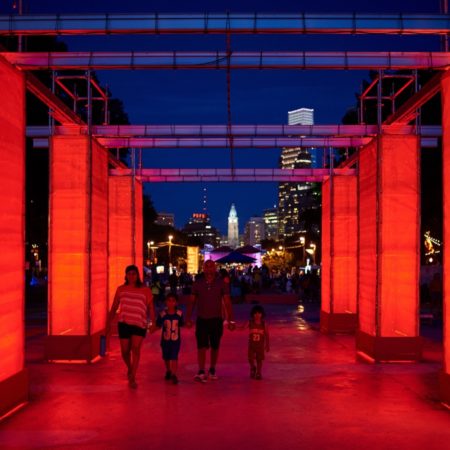 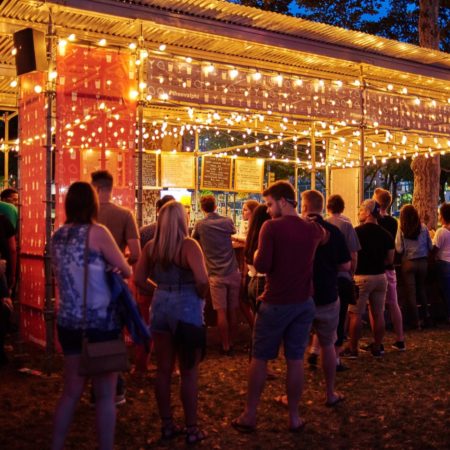 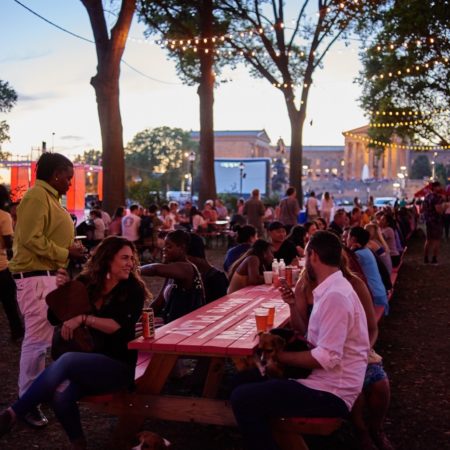 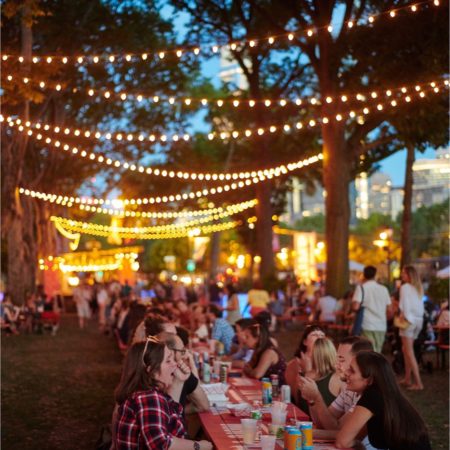 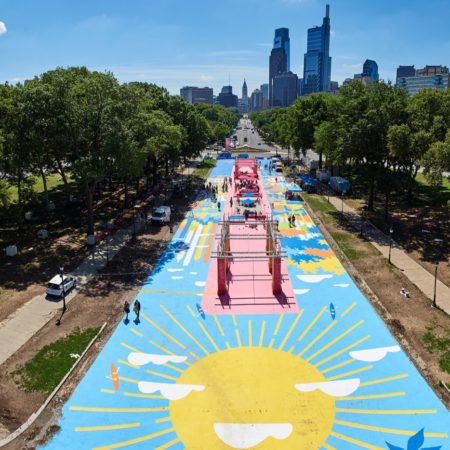 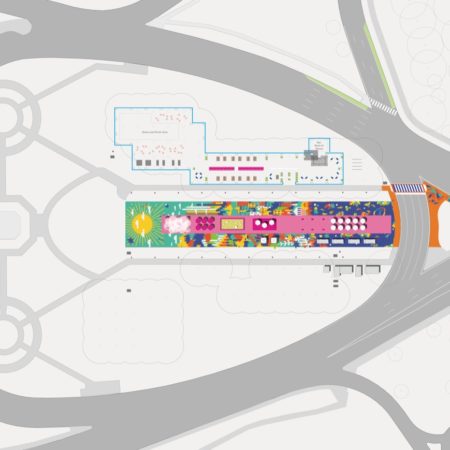 At the Oval itself, ‘More Park More Play’ took the form of a series of oversized pavilions that invited appropriation and delight. A spectacular Ribbon Garden became a refuge from the baking sun and a go-to Instagram subject. At night, the structural columns holding up ribbons were lit from the inside, creating an immersive experience wholly different from that during the day. The bright pink Big Seat became a magnet for children of all ages. The large platform had rubberized furniture foam integrated into it, painted bubblegum pink and marked with super-sized text, that allowed kids to bounce, relax, and congregate

Further up Eakins Oval was the Super Sandbox, so big it was essentially a beach was a place for kids to play and parents to hang out chat. It was ringed by a large bench allowing parents to relax and hangout while their kids played, as well as integrated umbrellas for shade. The Mr. Mister pavilion created a cooling and dramatic end cap to the installation. More than one hundred nozzles directed cooling mist into the area, which was often taken by the wind, creating a sense of spectacle and delight.

The installation was designed to radically expand the possibilities for play across the entire length of the Parkway, not just at Eakins Oval. In addition to the design of installations at Eakins Oval, we working closely with Fairmount Park Conservancy, Philadelphia Department of Parks and Recreation and The Philadelphia Streets Department to close out-bound traffic lanes on the Benjamin Franklin Parkway, reorienting one of Philadelphia’s most iconic spaces away from the car and toward the pedestrian and the bicyclist. PORT placed illuminated towers at intersections along the length of the Parkway to tie the intervention together and provide wayfinding and a sense of gateway. Colorful and unexpected installations, from intersection murals to a series of felled logs with airport wind-sock sculptures, heightened the sense of play and openness. 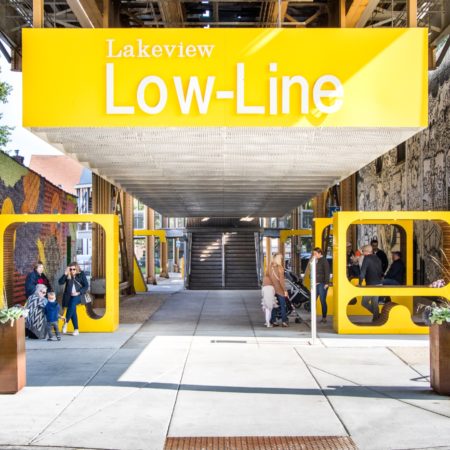