Paperbark Play Space, in the historic Gardens Precinct of Parramatta Park is a new all-inclusive play space designed for Greater Sydney Parklands and funded by the NSW Governments Everyone Can Play Program.

The provision of a low scale, carefully considered and sited play space for younger children on this site was included in the Landscape Concept Masterplan for the Gardens Precinct, Parramatta Park, prepared by Phillips Marler.

The Gardens Precinct incorporates the original main access road from the George Street entry into Parramatta Park leading to Old Government House, which overlooks and is visible from most of the Precinct. The play space site is part of a highly sensitive cultural precinct within this World Heritage listed area of the park. The site has both significant Aboriginal and European heritage and archaeological values, with artefacts recorded nearby dating back almost 40,000 years and archaeological mapping indicating that early convict huts were likely located near the proposed playground site. Visual and spatial restrictions meant this was the most viable location for the play space within the Precinct. The construction of a play space on this site was never going to be straightforward and the significance of the site invited a non-standard design and construction response. 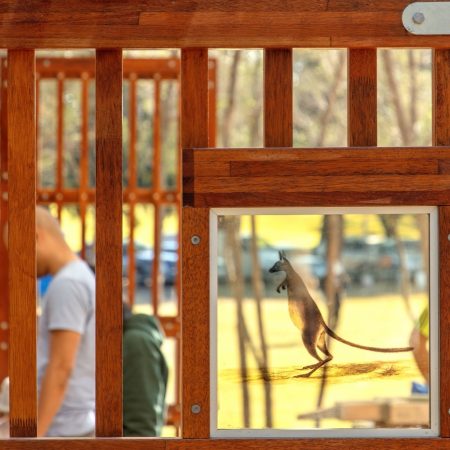 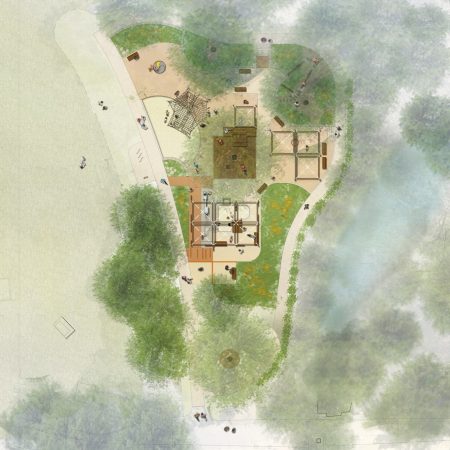 The strategy for the realisation of the play space had two key goals:

– 1. Development of a Technical Construction Solution which responded to the archaeological sensitivities of the site.
– 2. Development of a Play Design Solution which both responded to the cultural significance of the site and provided the range of stimulating and varied play experiences- accessible to a range of abilities and mobilities- expected in a true all-inclusive play space

Construction Solution and Archaeology: The intention of the project was to preserve in-situ the sub-surface heritage significant cultural landscapes and provide a playground that is in theory and practice reversible for this significant archaeological resource.

A ‘No-Dig’ solution – no excavation of the existing ground to protect potential Aboriginal and European archaeology – was adopted. In order to obtain heritage approval, any construction solution involving excavation would have first necessitated a detailed physical archaeological investigation of the site. This would not only have resulted in considerable program delays and consumed a large portion of the limited construction budget but most importantly impacted the potential subsurface archaeology thus significantly compromising the whole project. Adopting a ‘No-dig’ solution means when the project reaches the end of its natural life in 20 years time, the entire play space can be removed with no impacts to archaeology. This approach was fully supported by local Aboriginal stakeholders. From the outset, the project is protecting the Parramatta Sand Body which, as advised by Aboriginal stakeholders, is the greatest gesture the project could deliver.

With a ‘No-Dig’ construction solution, the Heritage Division approved the project without requiring a pre-construction archaeological investigation. This also meant that the Aboriginal Heritage Impact Permit (AHIP) that the Trust had already obtained for the precinct was not enacted for this project, ensuring that the precious Parramatta Sand Body that lies under the playground remained untouched. In this scenario, all footings must be constructed above the existing ground, which must not be disturbed. To cover the footings, the level of the playground needed to be raised up above the adjacent site, with considerable knock-on effects on the whole design, particularly the need to provide compliant wheelchair access. To minimise the ‘raising’ effect, instead of conventional deep footings, the design team developed thin ribbed waffle slabs, spread over a larger area and sitting on a layer of free-draining cement stabilized aggregate. This design also solved another problem, which was the potential deleterious effect of large slabs above the root system of an iconic existing eucalypt tree in the middle of the play space The use of voids beneath the slabs is intended to provide aeration and water to the roots.

Play Design Solution and Cultural Interpretation: The design is founded on the idea of combining play with cultural interpretation of this early convict site, using the architectural form of shade structures, ‘play walls’ and play-interactive artwork as well as historic images and text.

The thick posts of the shade structures are constructed out of hardwood, referencing the sturdy timber framing of huts and tents, while the cream-coloured rectangles of shade cloth recall tent canvas. Between the posts, interpretive timber ‘play walls’ are constructed, inspired by the patterns of ‘wattle and daub’ framing. Inserted into these ‘walls’, are artworks in glass and metal created by artist Jane Cavanough. These include captured early colonial images of Australian wild-life and convict ‘love tokens’, which were small metal keepsakes, engraved with messages and drawings, given and exchanged by early convicts.

The grid of shade structures and walls create an interconnected series of implied ‘rooms’, housing play activities and seating, including sand and water play. The stainless-steel water-play element was completely custom-designed by the landscape architect, with the centre-piece being a hand-fabricated tipping water bowl, re-calling rough-hewn washing bowls and tubs. In addition, there are swings, decks, a slide and climbing ramp, a carousel, a huge ‘explorer dome and timber balancing beams, with metal inserts of early convict tools.

A rich variety of potential play experiences, to suit young children of varying mobilities, including wheelchair users, has been provided in a unique constructed setting which responds to the heritage significance of Parramatta Park. The project has demonstrated technical innovation in its response to archaeological site issues and design innovation in its integration of play and cultural interpretation.