A former railway yard with workshops along the L28 railway line has been designed as a multipurpose, public green area. For the most part, the park is on the territory of Sint-Jans-Molenbeek, with a small bit belonging to the city of Brussels. In addition to a residential and recreational function, it also has an important connecting role for pedestrians and cyclists.

The Brussels-Capital Region purchased the grounds of a former railway yard and workshops along the L28 railway line in Sint-Jans-Molenbeek. The area is bounded by some structural, physical elements. In the west there is a railway and a metro line. To the east, along the Jean Dubrucqlaan, there is a dense residential area. In the northeast, an incline forms the border with the site leading to the park located in the Tour & Taxi zone. The site is 655 meters long in total, lies between the bridges in the Charles Demeerstraat and the Belgicalaan, and varies in width from 9 to 30 metres. The assignment to transform the zone into an urban park was included in the cooperation agreement between the Federal Government and the Brussels-Capital Region and placed under the management of Beliris. The assignment consisted of the following components: the preliminary studies (landscape study, acoustic study, fauna and flora research, legal and planning studies, topographic measurement), the pre-project studies, the drafting of the regulatory license file, the drafting of the tender dossier and the string and the monitoring of the works. The programming for the new park included a new pedestrian connection between the Belgicalaan Bridge and the Charles Demeerstraat Bridge (Pannenhuis); a play area for children of all ages, youth sports infrastructure; urban furniture (lighting, benches, waste disposal bins); new plantings; a guard house for Brussels Living Environment that will manage the park following delivery.

GREEN SPACE
The purpose of the reconversion of the site is to create an extremely green area in a neighbourhood where greenery is scarce. The park must also serve as an alternative green link for the vulnerable road user. Two other key principles are limiting the paved surfaces so that more rainwater can infiltrate the site and ensuring views, including for social safety. That’s why spacious lawn strips have been laid out where trees form an impressive vista. Low plants with ascending shrubs and groups of trees create a green transition to the edges of the park (in some places the rear facades of houses).

FOUR ZONES
The length of the park allows it to be divided into four zones, each with its own function: the Belgica access zone (access to the park via the Belgicalaan), the Dreef (walking route along the park and L28 railway line), the recreation zone (playground and access to the park via the Dubrucqlaan), the Pannenhuis zone (access to the park via the bridge in the Charles Demeerstraat). At the entrance along the Belgicalaan, a staircase combined with landings sets off an 8 metre level difference. Each landing has an access ramp for wheelchair users. For the construction of the stairs, large retaining walls were placed along the L28 railway line. The greenery on the side of the Dubrucqlaan will mainly consist of shadbushes and ground cover plants. The walking route is constructed of brown-beige, washed concrete that was poured on the spot. A row of trees, urban furniture (benches / waste disposal bins) and lighting masts grace this axis. The main entrance along the Jean Dubrucqlaan has been completely refurbished. There are recreational areas for children of all ages in this part of the park. The guard house (Brussels Living Environment) is strategically designed to ensure a visual inspection of the Agoraspace, children’s play areas and the entrance along the Dubrucqlaan and the main axis. This building will consist of an office, two public toilets, a technical room, a desk, a cloakroom and sanitary facilities. The pavilion has a green roof and a rainwater butt. The arrangement was done according to the principles of passive construction. The old access to the Pannenhuis landing will be restored and widened to a new entrance to the park from the bridge in the Charles Demeerstraat. The staircase will be constructed in brown-beige concrete, the existing retaining walls will be cleaned and renovated.

SOCIAL CONTROL
The edges and the interaction with the edges have an important influence on the plan area. The linear park lies alongside a track; on the other side it is bordered by the back of houses and a small municipal park.
Certain measures have to ensure sufficient social interaction and control. The walking and cycling route that runs through the park is important in this. In addition, the newly to be built day nursery is linked to the zone with play areas. Finally, there is the guard house that is fairly centrally located in the park and that will be manned daily by a concierge.

NEW ELAN TO THE DISTRICT
The wishes of the local residents were taken into account for the design of the park. The park is now accepted and has been given a place in a neighbourhood that did not have sufficient high-quality places. It creates meetings, relaxation, playing space and gives a new impetus to the neighbourhood. The soft connection between the Belgica and Pannenhuis metro stations is now a fact. 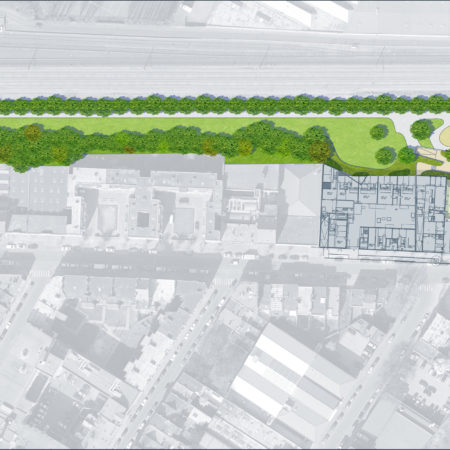 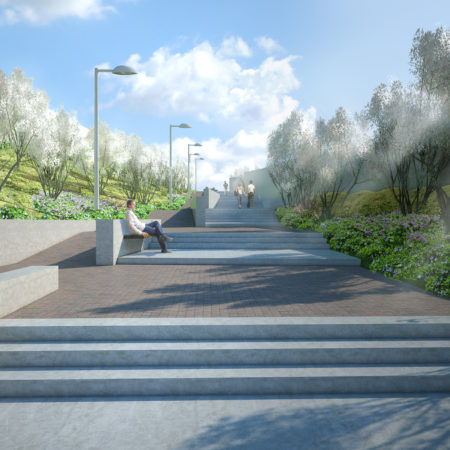 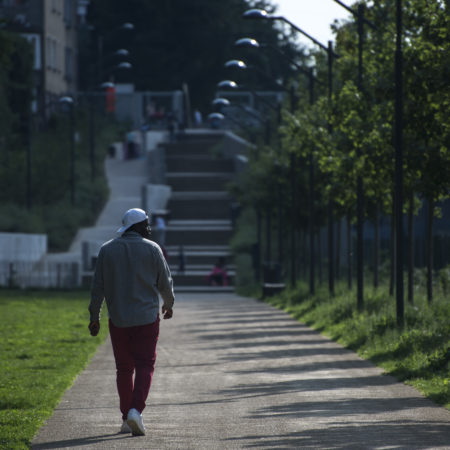 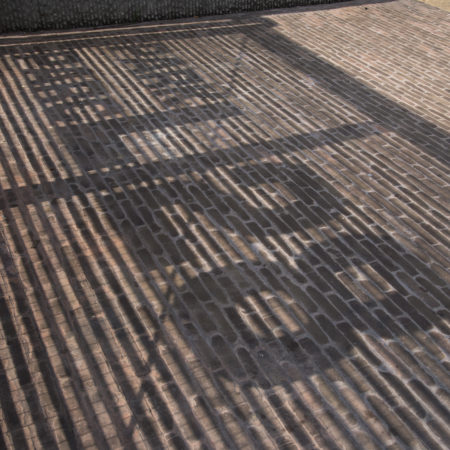 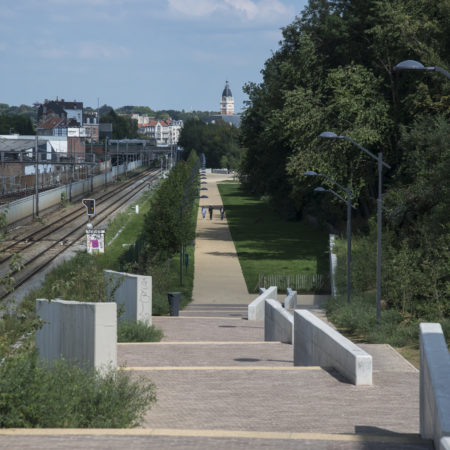 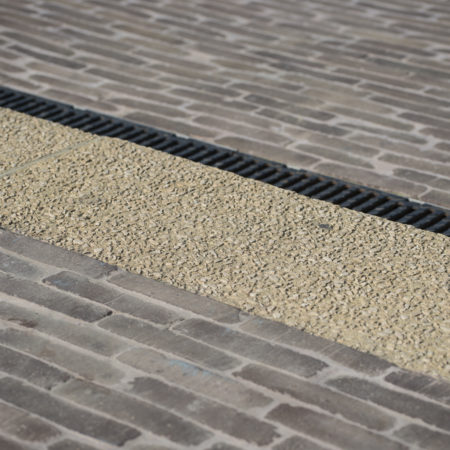 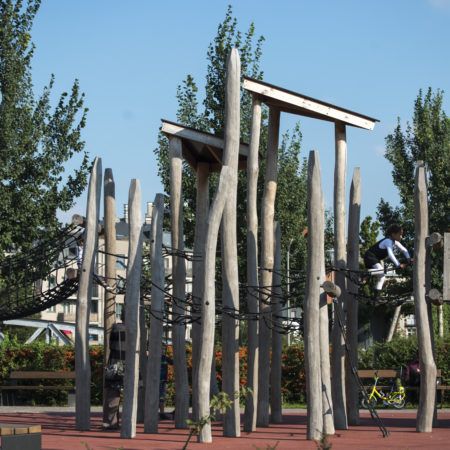 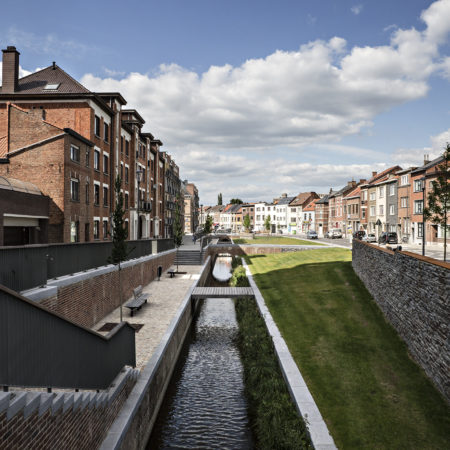 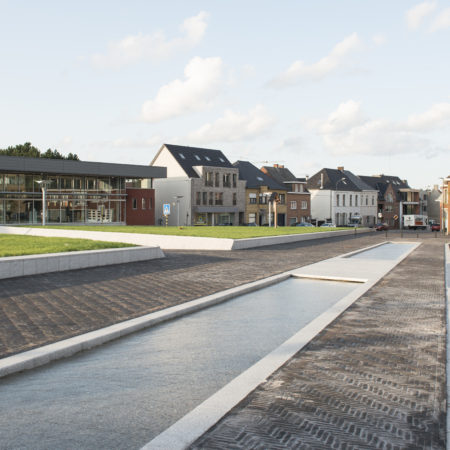