We’re passionate about design, about the possibilities for uniting architecture, nature, and design in creating highly individual gardens and experiences. Our landscape designs result from a rigorous and collaborative design process, one that is grounded in an understanding of each site and the desires of the client. Intrinsic to our design process is a belief in sustainability and community; as such, we continually strive to express our designs and ideas through minimal brush strokes. A weekly critique night is essential to our design philosophy. By discussing our working designs we challenge ourselves to explore new ideas, consider alternative approaches, and learn from each other. Our process ensures that we are continually challenging ourselves. And we believe our designs are better for it. Our aim is simple: to design beautiful natural environments that inspire and refresh those who use them.

Paul Sangha Landscape Architecture was established in 1999 and has projects in British Columbia, Alberta, California, Pennsylvania and Hawaii. Paul Sangha established the design studio after a 3.5 year partnership in Rule Sangha & Associates, prior to which he was a senior Landscape Architect and designer in Ron Rule Consultants for 10 years. As a design studio our team members are diverse, and our backgrounds and experiences are international. This fusion of styles and interests energizes our studio and keeps our designs continually fresh. 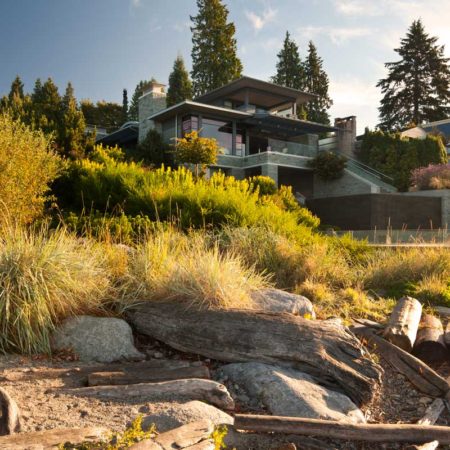 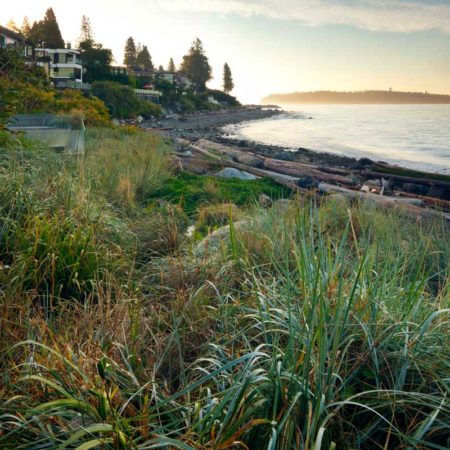 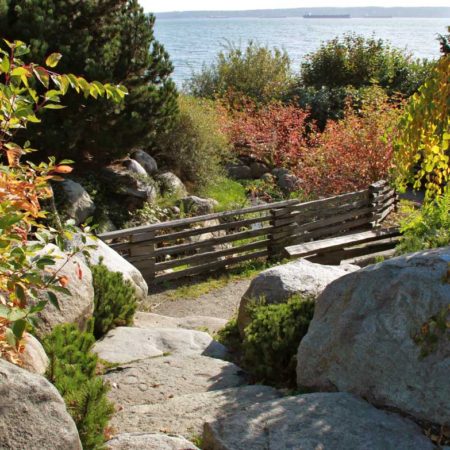 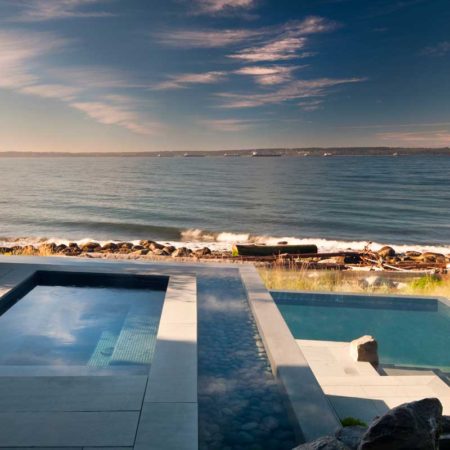 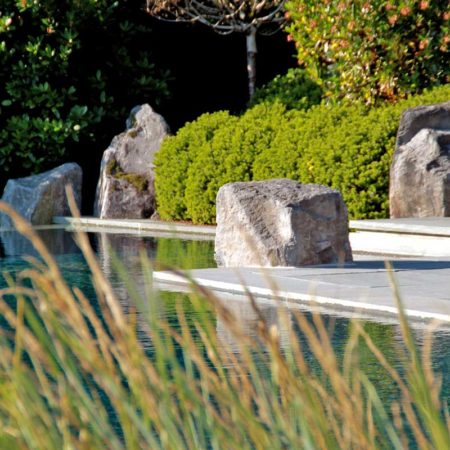 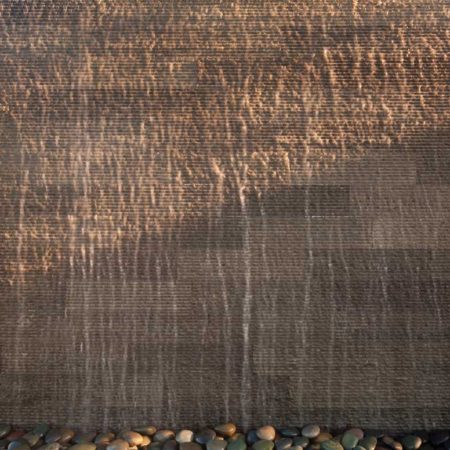 Creek’s End blends socially and environmentally driven public space interventions with a residential design that abstracts the natural west coast transition between mountain and sea. The project brief required the creation of a uniquely West Coast sanctuary for the property’s owners that seamlessly integrates with improvements to the adjacent foreshore and public right of way.

Adjacent to the private residence, a previously culverted salmon-bearing stream under an asphalt access road has been daylighted. It now flows freely alongside naturalistic planting and a winding pedestrian path, enriching the site with invaluable habitat and beautiful public space. Along the previously scoured public foreshore, the strategic placement of boulders and logs encourage the formation of tombolo-like sediment formations. Environmentally appropriate planting further encourages natural deposition, improving habitat while protecting the site from extreme storm events.

On the residential property, the diffused grey hardscape palette of bluestone and basalt blends seamlessly with the pebbled public foreshore beyond. Framed by an inviting arbor, abstract branch forms of the front entry gate speak to the site’s cedar-covered mountain backdrop. Reflecting the movement of the adjacent creek, water cascades from a water feature at the entry, downward through the garden terraces, drawing users towards the lower garden rooms. The path from the entry courtyard to foreshore is marked by a subtle evolution from architectural to natural. Juxtaposing the terraces’ formal structure with roughly textured local basalt boulders and naturalistic planting, the site expresses a sensitive relationship between the organic and the abstract.

Creek’s Edge embraces its position as a landscape of transition, expressing its context through its subtle form, materiality, texture, contrast and connections to the public landscapes beyond. The precedent setting project has become a catalyst for similar environmentally-driven improvements along the urban foreshore. 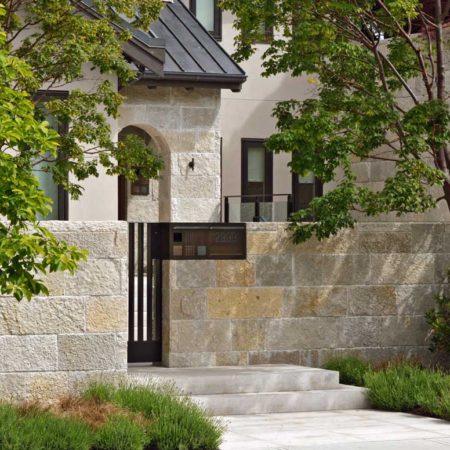 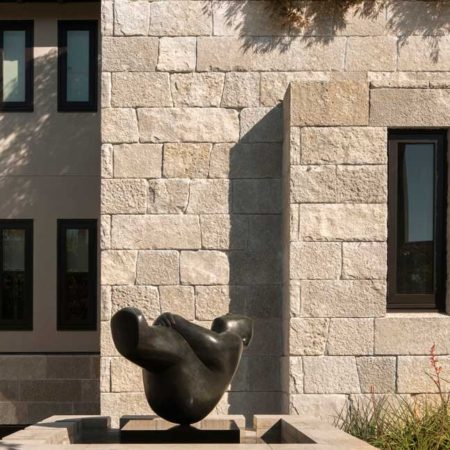 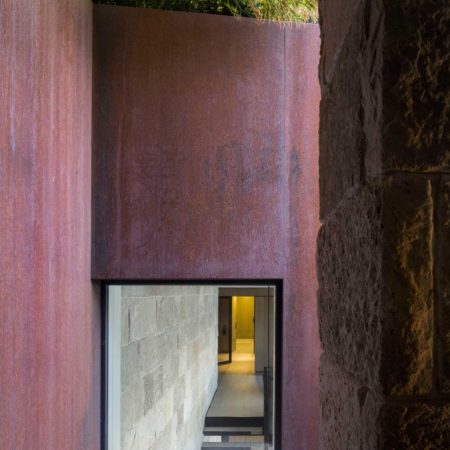 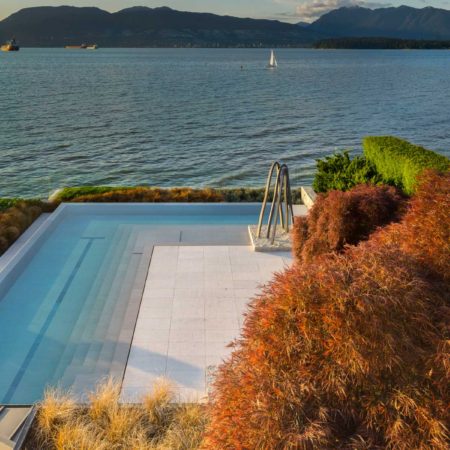 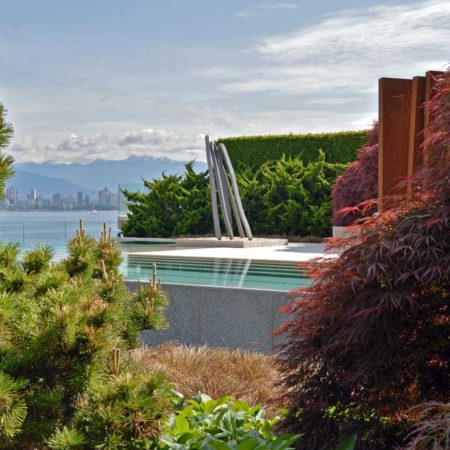 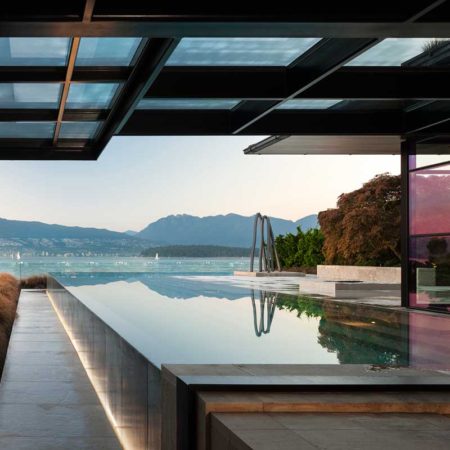 The development of the Point Grey Residence involved the amalgamation of two adjacent lots, an addition to an existing home and the complete redesign of the property’s landscape. Due to much of the addition being located below grade, many of the planted spaces are extensive, low maintenance green roofs. These extensive plantings increased the planted area in the rear yard by over 200% from what would have otherwise not been possible. Insulation provided by these green roofs contributes to the energy efficiency of the geothermally heated home and pool below, increasing the amount of surplus clean energy that is added to the local energy grid. Additionally, impermeable surfaces in the rear yard are reduced by 52% from the previously existing condition. In combination with below grade infiltration pits, this allows for site stormwater to be entirely managed on site to the volume of a 50 year storm event. To reduce the environmental and social costs of the stone used on site, all the project stone was quarried in North America. LED lighting and drip irrigation further contribute to ongoing site energy and water use efficiency.

The architecture and landscape were developed in tandem to eliminate the programmatic definition between adjacent interior and exterior areas. Moving through the terraced site, architectural and landscape spaces are drawn into one another as volumes and axes continue across ‘traditional’ threshold transition points. This common programmatic and experiential vision was defined early in the project and facilitated via frequent collaborative interdisciplinary design meetings that included the project architect, landscape architect and a range of technical specialists. This unique collaborative process elevated the resulting experience to one that flows seamlessly across traditional disciplinary boundaries.

Natural horizons in the field of view are reflected in linear forms of weathering steel, stone, water and glass. The material palette is soundly anchored within the surrounding West Coast maritime landscape and is enriched through textural variation and attention to detail. In an innovative and environmentally sensitive application, large panels of locally made recycled glass form the cladding on the vertical pool walls. The entire volume is given a soft translucency that blends seamlessly with the ocean beyond and is enhanced by the Canadian limestone that forms a continuous surface through the terrace and pool stairs. 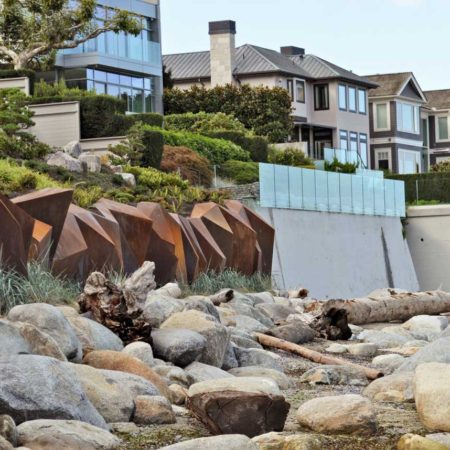 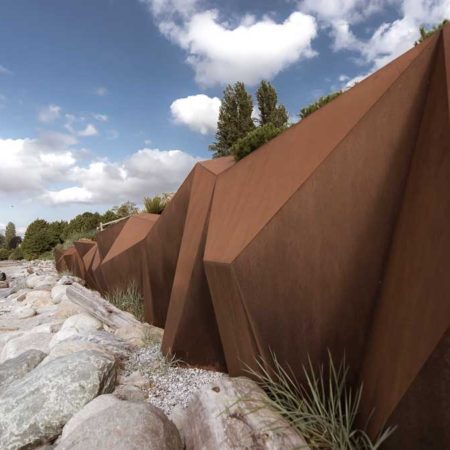 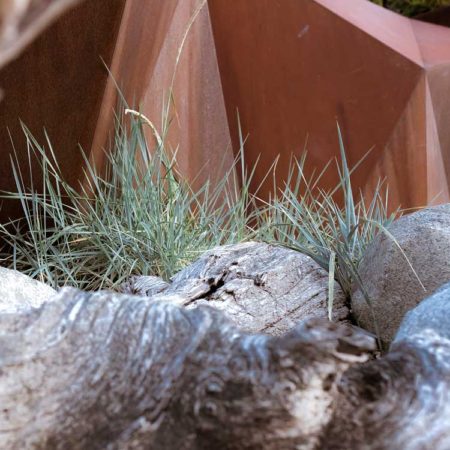 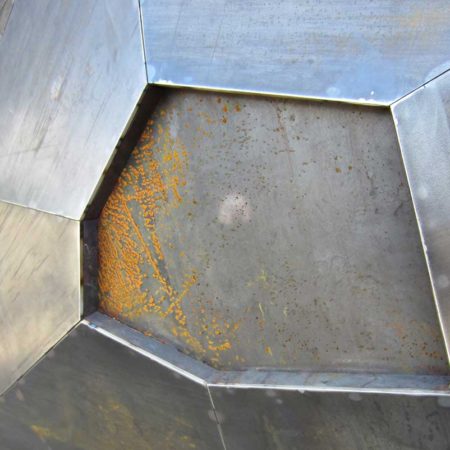 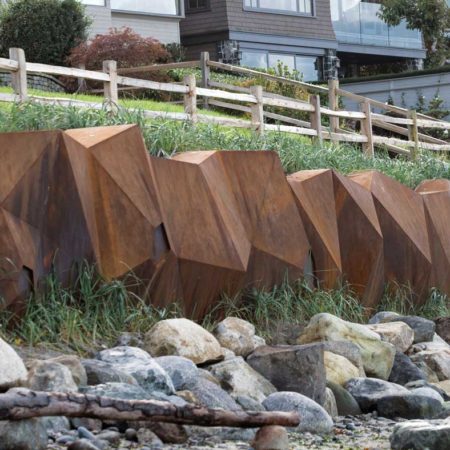 This project began with the King Tides, which struck the B.C. Coastline on December 2012. Paul Sangha Landscape Architecture was approached by a couple to provide a solution to their Vancouver property where the King Tides had carved out the entire bank, leaving the deck completely suspended. Previous foreshore experience had already proved that constructing oceanfront concrete walls resulted in foreshore erosion. Instead of opting for this common choice, Sangha and his firm took this as an opportunity to create something unique and unlike any other waterfront property in Vancouver.

The firm worked with oceanic engineers – Balance Environmental, to develop a solution that would not only enhance the foreshore but also deal with the retention of the bank. Using corten steel Sangha drew inspiration from the abstraction of sandstone formations seen on Saturna Island here in British Columbia. This also became the formwork on to which concrete was shotcrete, and as a result, the corten wall became an artwork that was at the same time functional. The abstracted shape of the corten, in conjunction with strategic boulder placement along the foreshore played an integral role in dissipating wave energy and ultimately, facilitating the deposition of sand to enhance foreshore and create habitat for flora and fauna.

Sangha worked with Fossil Project Services for installation and Drabek Technologies for the fabrication of the corten steel. Both physical and computer models were developed, with the computer model being fed into an automated water jet cutter in order to minimize material wastage. This process helped to simplify the complex forms. The resulting efficiencies made costs equivalent to what would have been the cost of a series of concrete walls.

The corten wall initially began as an one hundred twenty foot intervention, but as Sangha was experiencing the same erosion issues with the neighboring clients, they also agreed to participate in the construction of the wall. As a result, the wall now spans two hundred feet, transforming from abstracted rock forms from the west to barnacle-inspired formations toward the east.

Since its completion, the corten wall has fostered a huge amount of public engagement on the beach, attracting kayakers, sunbathers, beachcombers and local residents. Dune grasses are beginning to establish and sand is slowly depositing. The development and execution of the wall illustrates the first of such an endeavor along Vancouver’s waterfront. The wall shines as an example of both functional and accessible art that is helping sculpt an identity for Vancouver’s shorelines.