The idea of a pedestrian bridge connecting the Belgrade Fortress with Sava quay is a conceptual artistic solution made by two artists-sculptors Mrdjan Bajic and Richard Deacon under the title “Kalemegdan Bridge” in the period from 2006-2009. In the preface to the book of the same title is written:

“Slavic Belgrade, a fortification on the hill at the confluence of the Danube and the Sava rivers, built at the location of Roman Singidunum, kept developing during the centuries as a Medieval town which remained, even when the settlement had grown beyond the limits of the fortification, the core and the city centre, up to modern times…This project has returned the Belgrade Fortress, both functionally and metaphorically, to the river bank from which it had been unnaturally wrenched.” 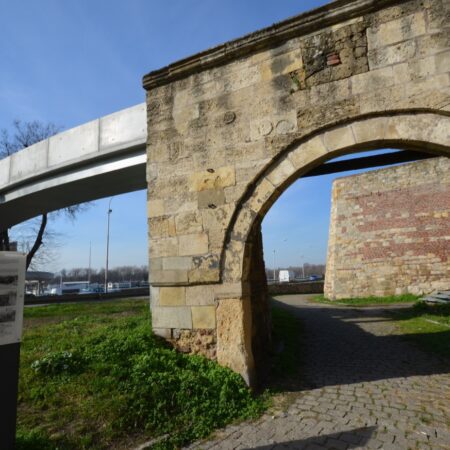 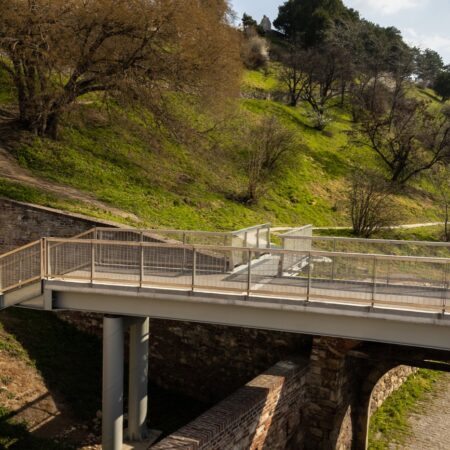 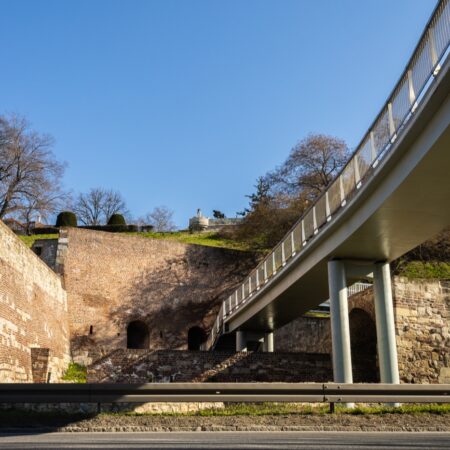 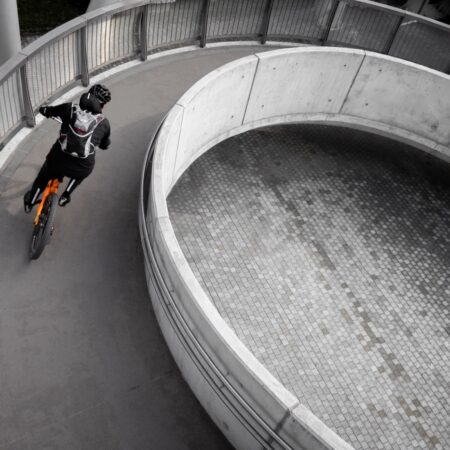 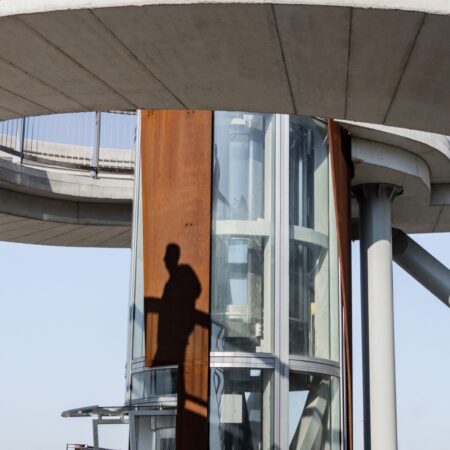 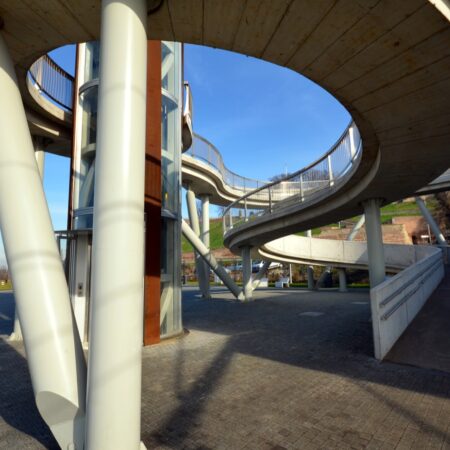 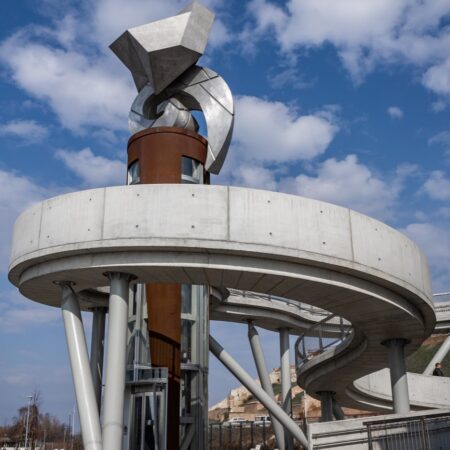 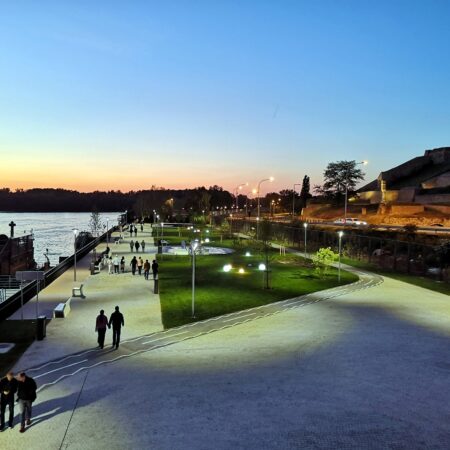 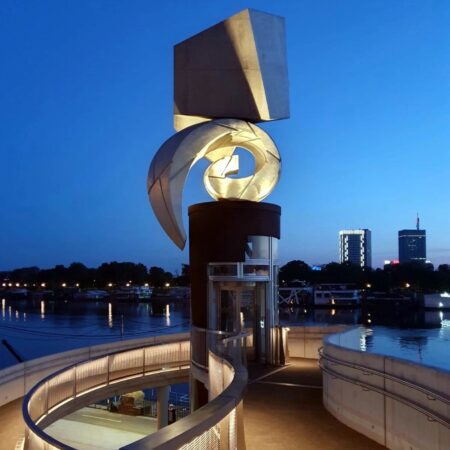 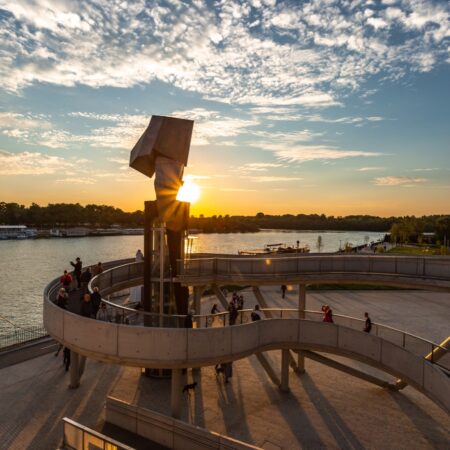 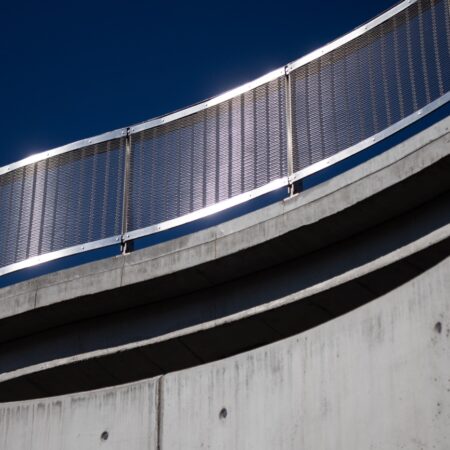 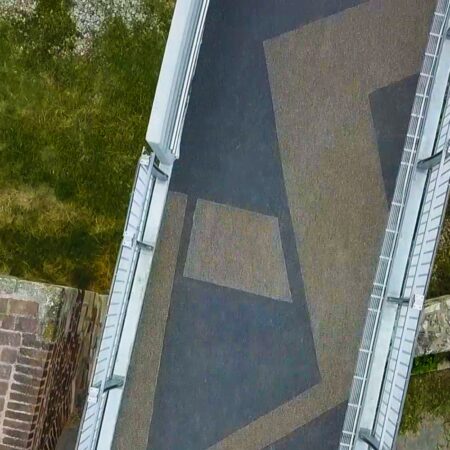 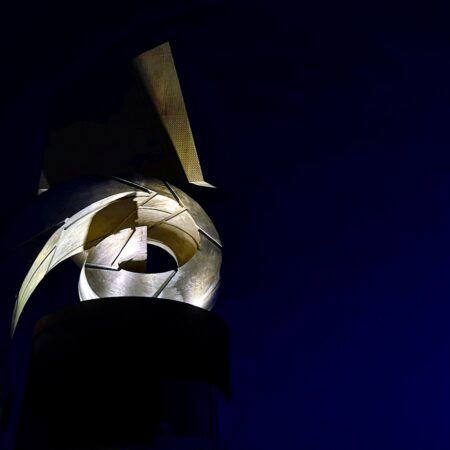 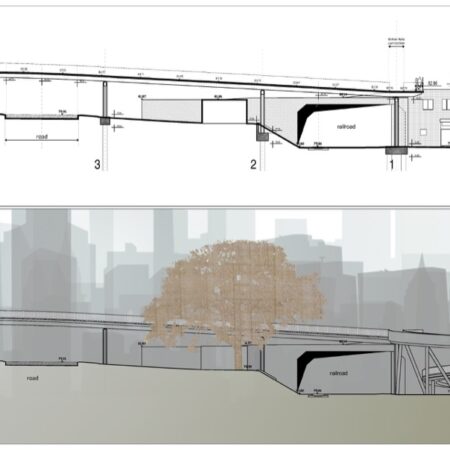 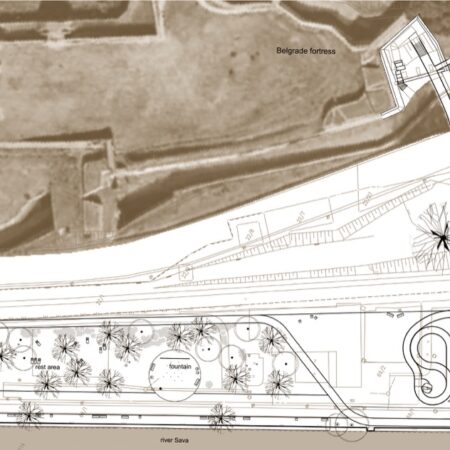 The disposition of the bridge is determined by the detailed analysis of the space and pedestrian flows. It was logical for the bridge to “spring” from the base of the Grand Staircase leading from the Belgrade Fortress, the very place being a historic and topographic link, an “opening” point. The informal route becomes thus, an imaginary corridor over a busy road and a railroad. Its starting point is in the trench of the Belgrade Fortress Sava slope and it ends on the promenade of the Sava river, near Beton Hala – a former warehouse space of the river port.

The connection between the Fortress and the river bank was not supposed to disturb the Fortress panorama. At the same time, its end on the quay near the Beton Hala should be a functional and aesthetically contemporary intervention in space, having in mind that the Sava promenade is constantly changing and adapting to the modern city and to a new commercial purpose of the Beton Hala.

The use of materials comes with the gradual constructions of shapes. Descending from the fortress to the riverbank, these shapes are being constantly transformed, due to dominant functional requirements. Within the fortress and right next to it, that must be a discrete construction that restores a non-existing path.  In the fortress area, the bridge is traced parallel to the Outer Sava Gate dating from the XVIII century, in such a way that the lower edge of the bridge does not intersect the inner arch of the gate. The crossing over the wall, in the trench of the Sava slope, ends with a stairway, in order to overcome the height difference, and it connects the new stairway of the bridge with the plateau in front of Great Staircase descend. A short bridge, which is set on the main bridge itself, enables the connection, over the rampart, with the path on the slope toward the street.

The bridge is designed as a simple line form, using natural concrete and metal, applied here as a simple compound of monolithic and transparent architectural elements of reduced forms. The walking surface of the bridge is made in two shades, according to the author’s design. It represents a simple, concise visual account of the city developed during the epochs. Seven visual segments symbolically tell us the story from the neolith till the modern time along 75m long path and are marked with metal plates placed on the edge of the bridge.

On the very bank, there is a ramp in the shape of an architectural-sculptural form, developing along the path in several coils around the elevator tower in order to overcome the height difference of 7m enabling thus people to climb from the river bank to the pedestrian bridge. At the point where the spiral ramp meets the bridge, there is another short bridge to connect the main bridge with the public parking on the roof of Beton Hala.

The 10m high elevator tower, a steel structure is, at the same time, a sculpture pedestal. Its facade is made of alternating corten steel and glass lining. A steel membrane reveals glass parts of the cylinder and behind it, the transparent elevator cabin represents the dynamic part of the sculpture.

Sava promenade in the bridge area is designed as a space for leisure, relaxation and recreation and has all the elements necessary for the purpose. The landscaped green area dominating this part is “decorated” with micro ambiences (deckchairs, sprayers, playgrounds and similar), while it is in direct contact with pedestrian areas and bicycle path.  Stone and wood, the natural materials that were used, increase the functionality and aesthetic quality of this space. The reduced form of the plateau at the ramp and the elevator access enables the sculpture to “breathe” and dominate the space. The result is visibility and easy accessibility to the bridge. The area of the landscaped zone is 6170m2.

The Sculpture, as the backbone of sculptural-architectural form, together with the Bridge and the landscaped surrounding space represent a new point of reference in space, a unique and recognizable whole that signifies a crossroad, a meeting point of the Belgrade historical core with the modern city on the river bank.

Office involved in the design: Institute of Transportation-CIP, Belgrade, Serbia