1 The social dimension. A space to play adapted to the childhood.

The Children’s Playground at the CEIP Sierra Nevada Public School may seem like a routine investment, made by the regional government, to improve or maintain its facilities. However, people involved in this project (Parents Association, teachers, City Hall of Granada, Junta de Andalucía …) agree that this is an outstanding case.
Early childhood education was included in primary schools only a few years ago. Clustering of children aged 3 to 6 in these schools has generated the demand for fitting out and renovation of pre-existing playgrounds and external spaces for outdoor activities, mostly elementarily urbanized. Faced with this situation, in recent years, a group of parents of the CEIP Sierra Nevada, among whom we are included (the architects), came claiming this improvement and updating that, by regulation, should be different from the spaces of other children of the school (from 6 years onwards). 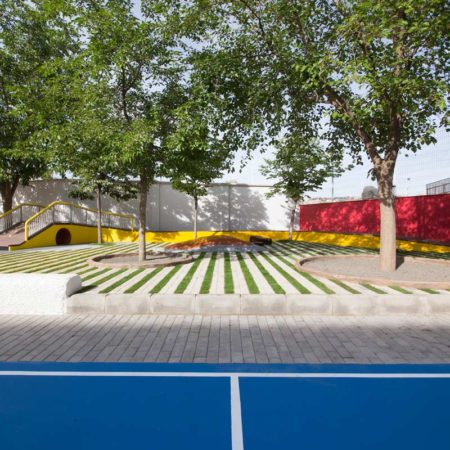 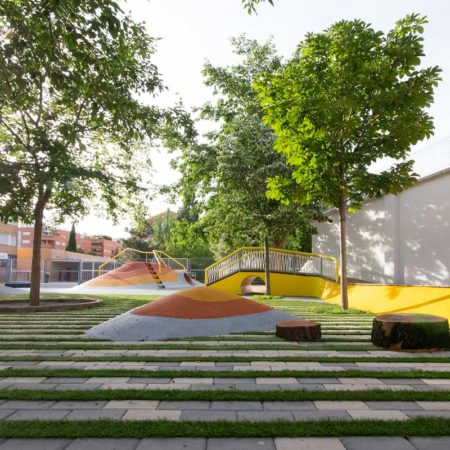 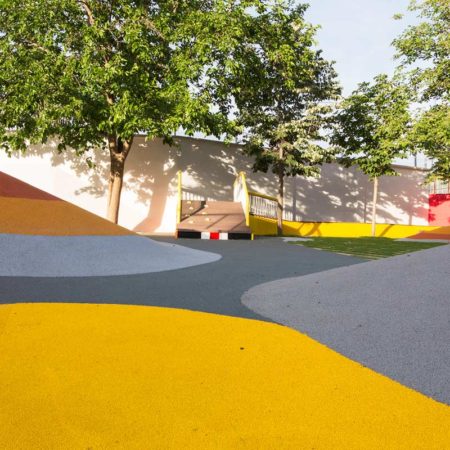 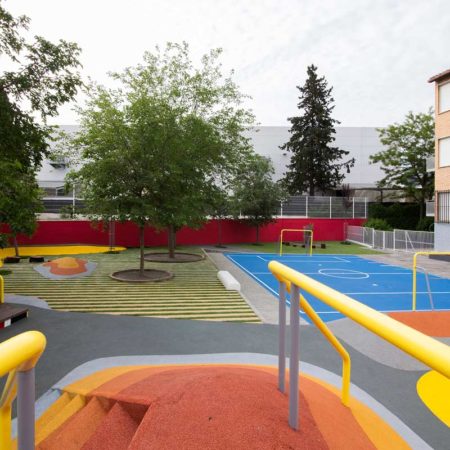 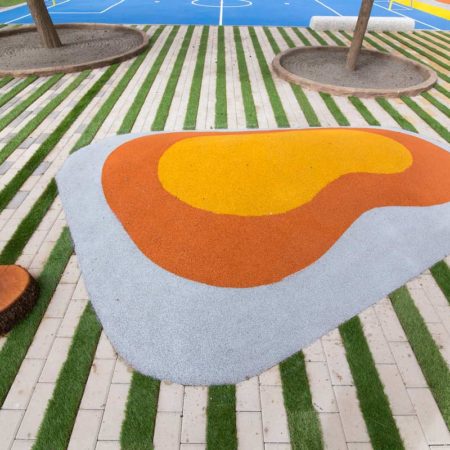 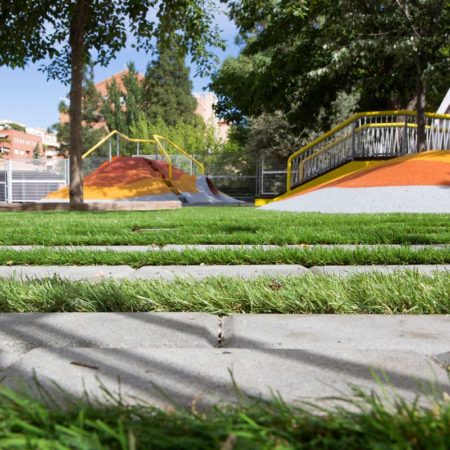 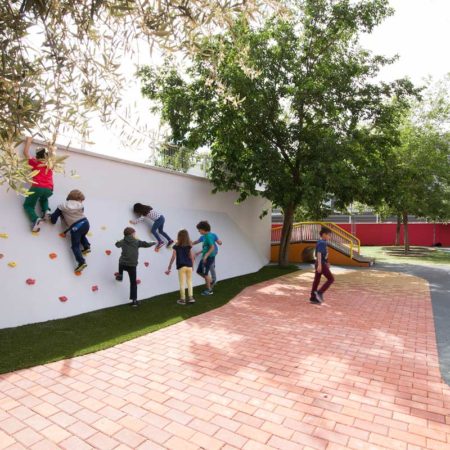 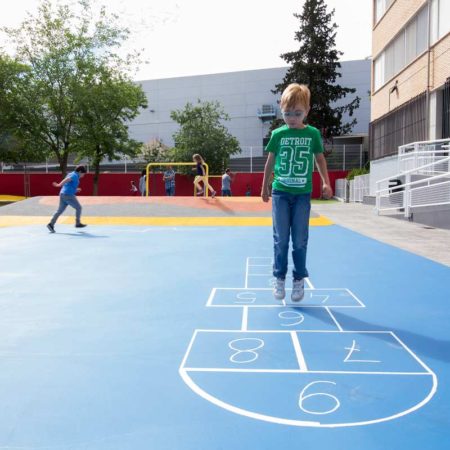 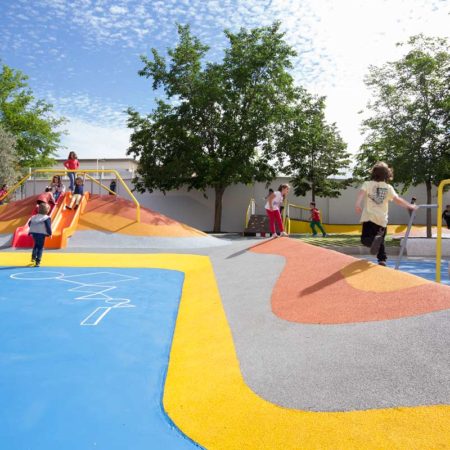 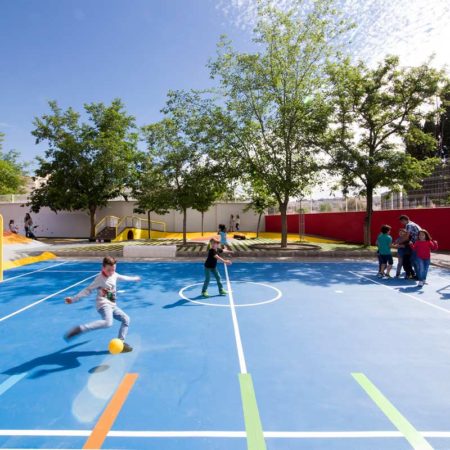 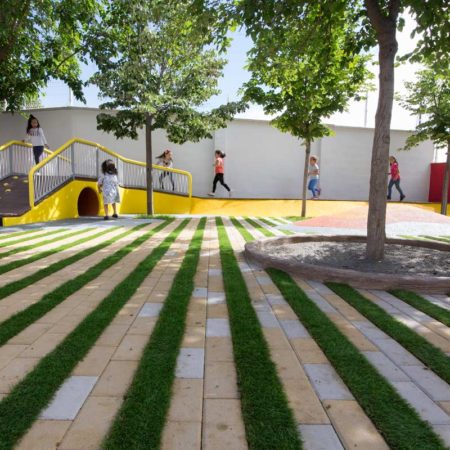 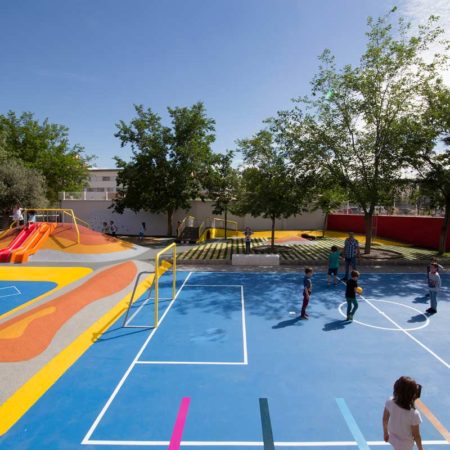 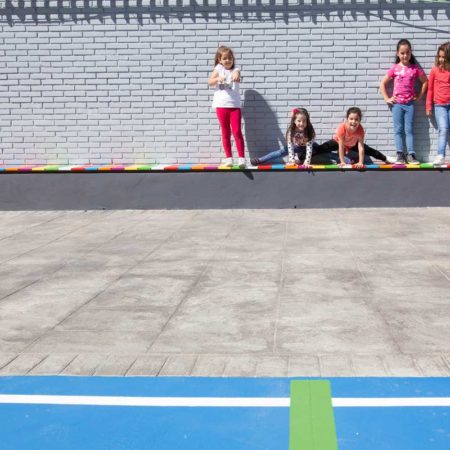 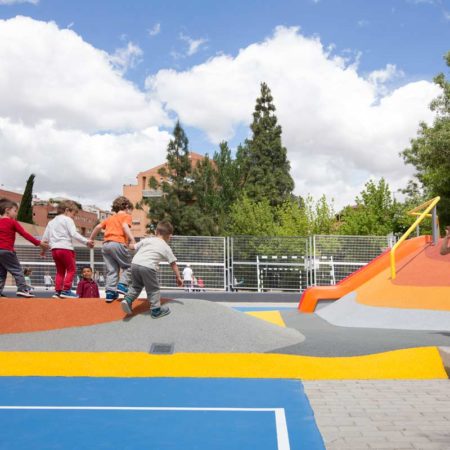 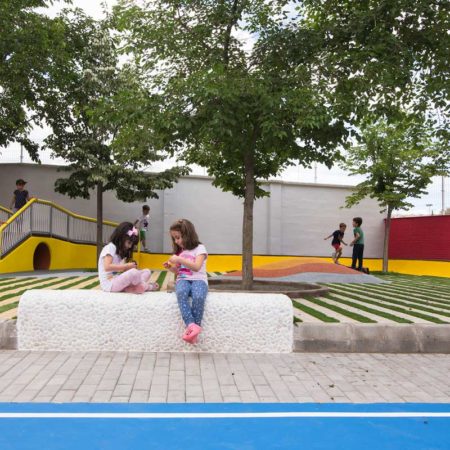 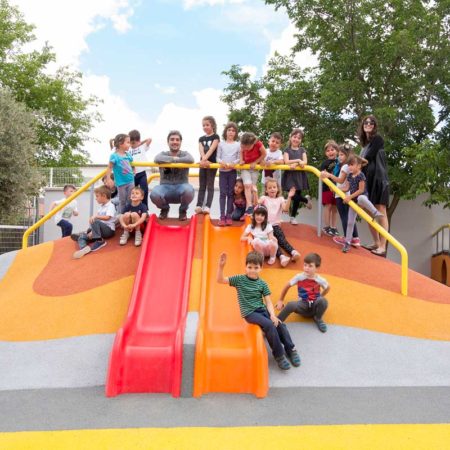 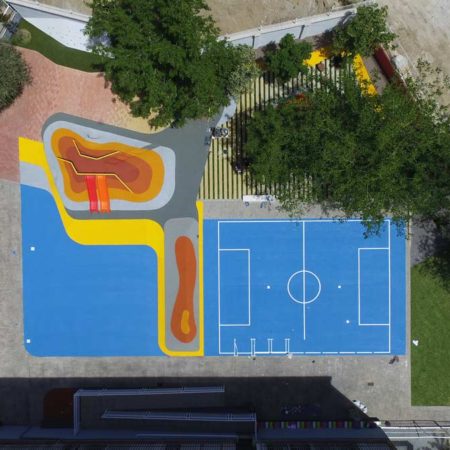 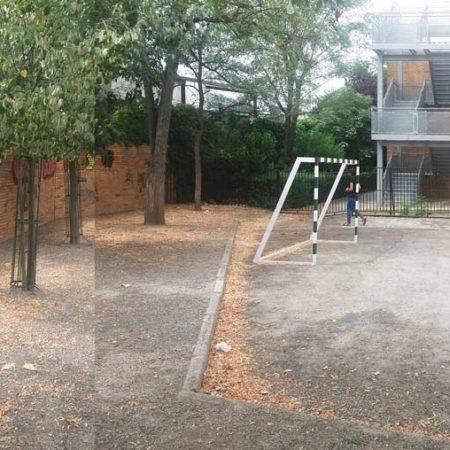 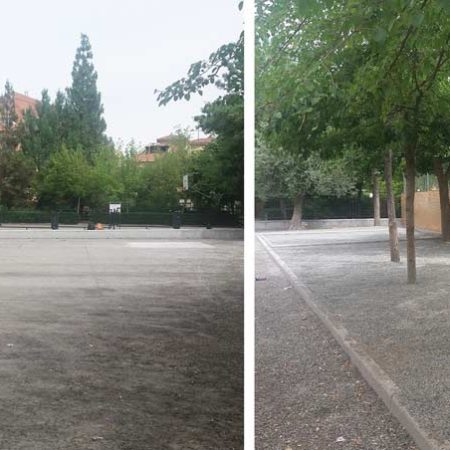 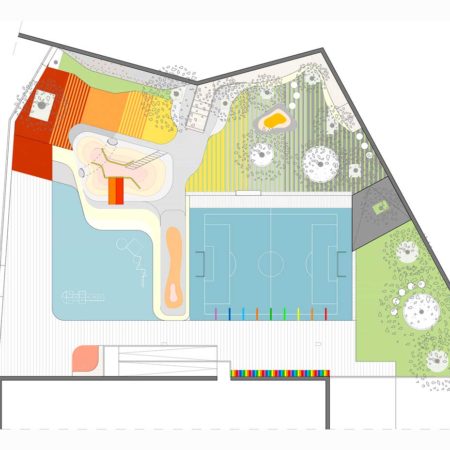 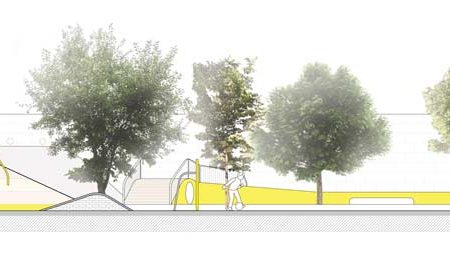 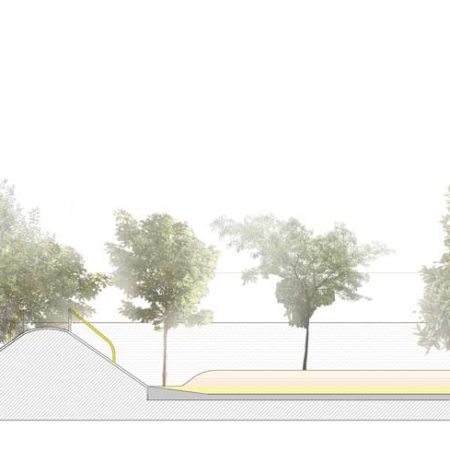 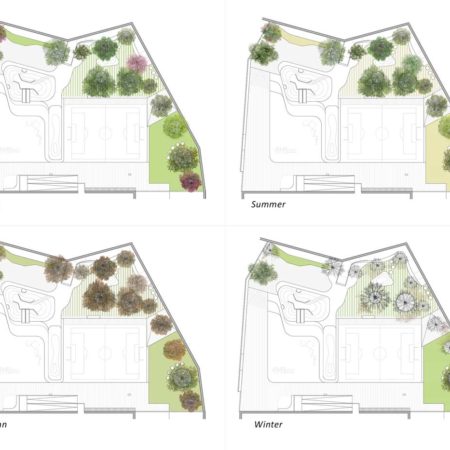 The youngest children need spaces enabled for their particular conditions. They play more individually, usually sitting or directly “over the floor” and heat or cold, dirt, possible infections, affect them much more than the older ones. That is why, from the School staff, it was decided to promote this project in its Children’s Playground, which we are now presenting, thus increasing its level of comfort and habitability: a delicate, creative, regulated and safe space. We are proud to observe how the educational community around this project (parents and families, teachers and students) have welcomed with enthusiasm their new space that has been turned into a sensitive place to the needs of their real users: the smallest ones.

The children’s education groups that have in their project space their main playground mean a total of 225 children. The CEIP Sierra Nevada is next to the “Paseo del Emperador Carlos V”, in front of the Granada Sport Palace, city of Granada (Spain). The school was built in 1983 along the road to Zubia, a town belonging to the Metropolitan Area of Granada. By that time the school was completely surrounded by the agricultural plots of La Vega Sur, a traditional periurban area of the depression in which the city is located, about 35 km from the summits of the Sierra Nevada. In relation to the preexisting area of playground, the project can be summarized in 276 m2 of wooded area over compacted earth and gravel; 423 m2 of sports court (futsal) made of a deteriorated layer of concrete; 56 m2 of perimeter course and 24 m2 of access ramp to the school building.

The design was conceived and developed during the summer of 2016, between Asturias and Granada. The works have been executed by the company Granárabe Construcciones S.L. from September 2016 to May 2017. Its budget has amounted to 65,000 euros. The introduced tree species have been: Prunus cerasifera ‘Pissardii’ ‘Atropurpurea’. Red ornamental cherry tree. Deciduous; Magnolio (Magnolia grandiflora). It is a evergreen tree; Tree of love (Cercis siliquastrum). It is a deciduous tree of small size, of very abundant pink flowering.

3 The project of an educational landscape. Fields, metaphors and dynamics.

The project arises from two conditions: the place and the program. Understanding both from a logic that puts them in value as specific bases that endow the new space with identity and naturally adapt it to the needs raised and to the user’s understanding. Speaking of naturalness here is also speaking of economy of preexisting resources and common sense in the solutions, to overcome the strangeness of a project “out of place” at first for many reasons. Naturality is also to perceive that a space for playing does not need artifices but the construction of a landscape that provokes the game and allows the children to be there, without more speficic activity than that, to interact freely with the environment.

The project takes advantage of the small difference in level between the previous sports court and the gravel space of the trees. It tries to construct a story that incorporates in an organic way the previous vegetation. The respect for the previous forms aims at the creation of a complete landscape, a geographical metaphor that allows children to relate to a multiple landscape and, in some way, personal: the sea, the mountain, the meadow or the countryside are present in the project, building a sort of boundary between land and water. The idea is also to reflect a magical, non-figurative landscape that lead users to possible and imaginary landscapes in which the natural is, at the same time, a creative act of each child. Thus appear desert or stellar topographies, abstract and representative scenes, that provoke the suggestion of possible itineraries, hidden or secondary, bits of tales, hiding places and not quite real passages.

The deployed use of color, forms not completely figurative, transitions between hard and soft surfaces, singling out each tree with its own base that makes it behave with the terrain in a specific way; materials, constructive details and expressions (musical bench, chained geometries, traditional chalk painted games, shaded spaces, reading areas…), everything has a non-direct pedagogical mission in the courtyard. A presentation of a backdrop for playing that tries to remain in the background to place the children and their actions as fundamental figures of the scene. The rest of the project, in its limits and contact with the school building, tries to remain in a third plane that allows to create a secure space, its control, its verification as that space for which the investment was carried out and its autonomy with respect to the rest of the school patios.

“The fencer is dialectical. One question, one possible answer. You cannot play alone. He does not need the pitch. Space is generated by movement. A moving point, fast, forms a line. […] I propose that our architecture be like that. A space that is the instant use footprint. An agile thought instantly materialized ”
Federico Soriano Palacios “Es pequeño, llueve dentro y hay hormigas”, Actar: Barcelona, 2000.