How to creat an unplanned children’s playground in the prosperous, high-density, high land price Science Park setting，and then successfully become a new hot spot by activating the entire public space?

The project is located in the Zhongguancun Science City’s major business zone. With older residential flats selling for $25,000 per square meter, it is one of Beijing’s most desired areas. The T-shaped below ground level commercial street, which also acts as the Science City’s major public gathering space, delivers daily commercial services to the 10 hectares of the 110,000 m2 Science City office area. (Avoid long sentences). The Science City, though the site bringings together office, R&D and commercial it lacks outdoor area for children to use. The commercial street, as an open space, is linked to the ground floor by four large and spacious steps, each being fully interpreted for commercial efficiency and traffic efficiency,but lacks vitality and staying space. The management wanted the designer to come up with a whimsical idea to help the site’s potential. 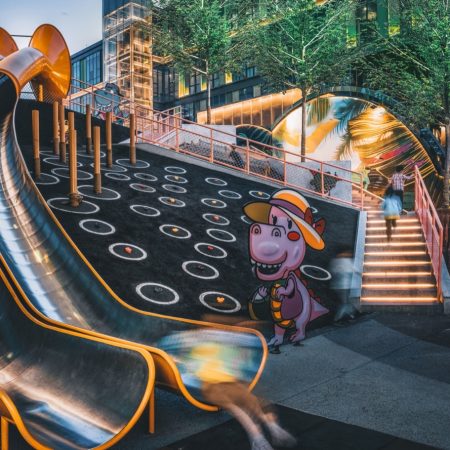 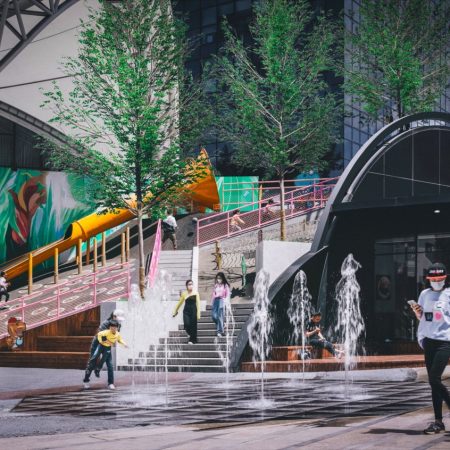 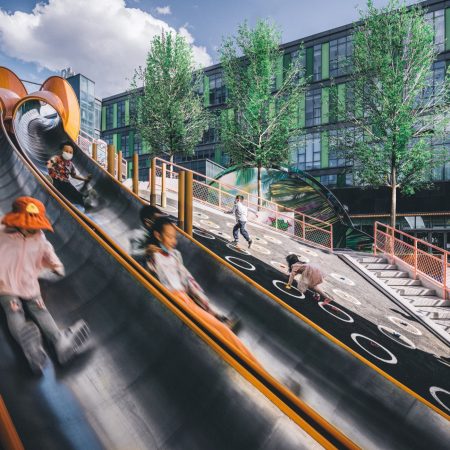 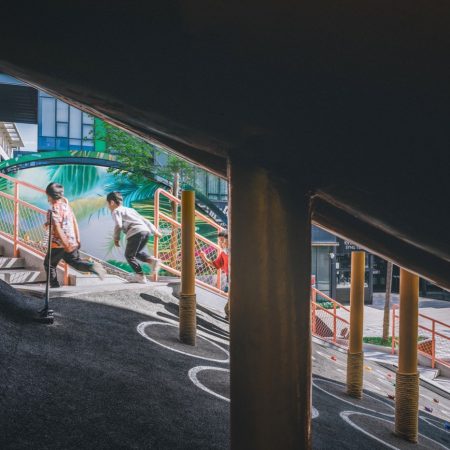 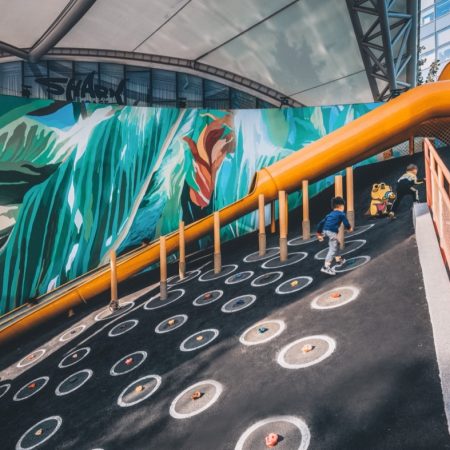 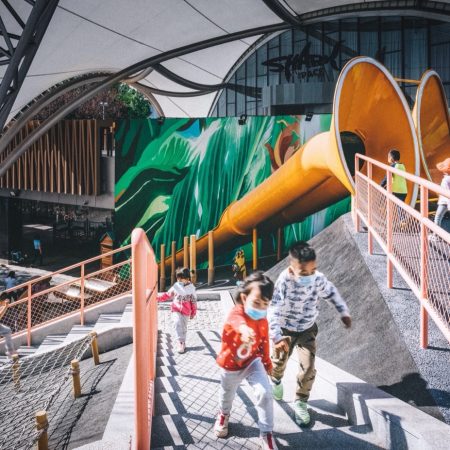 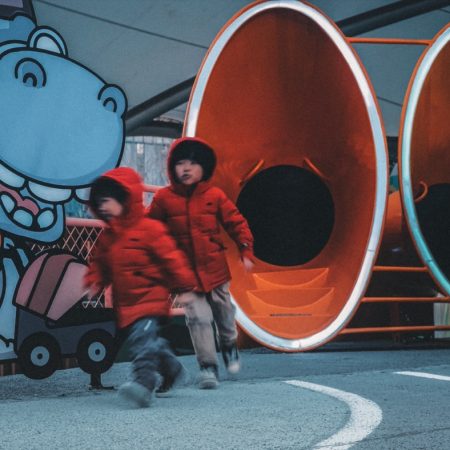 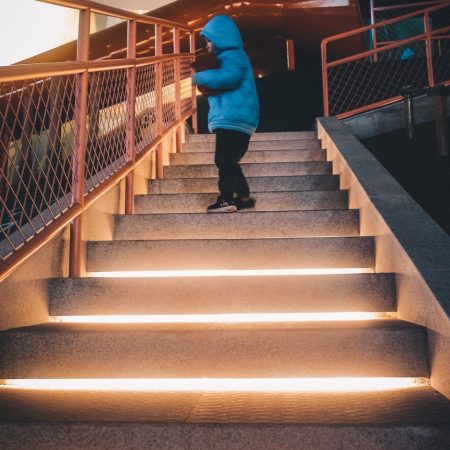 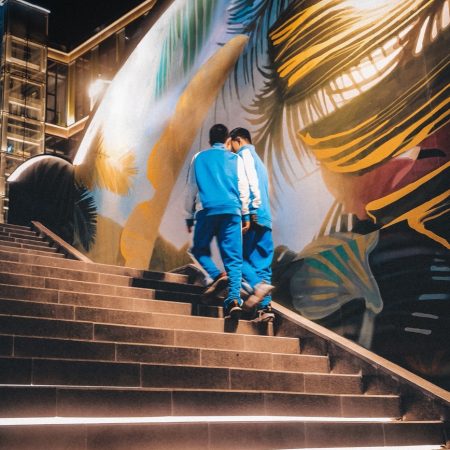 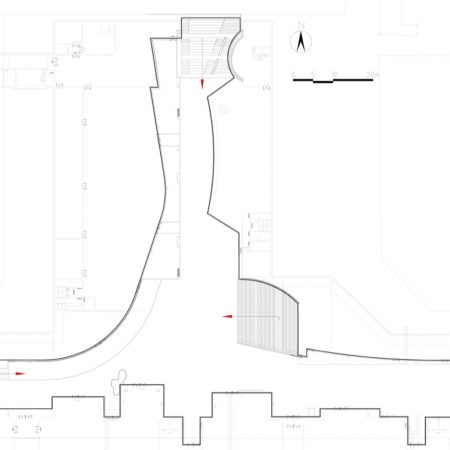 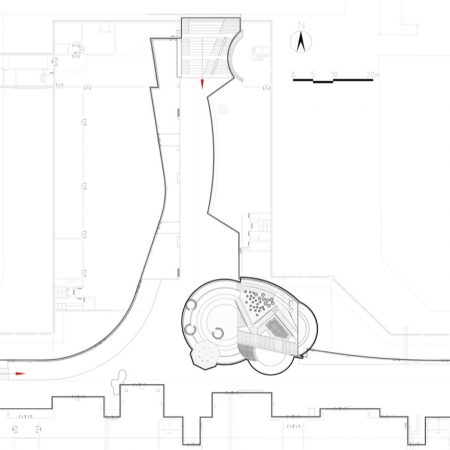 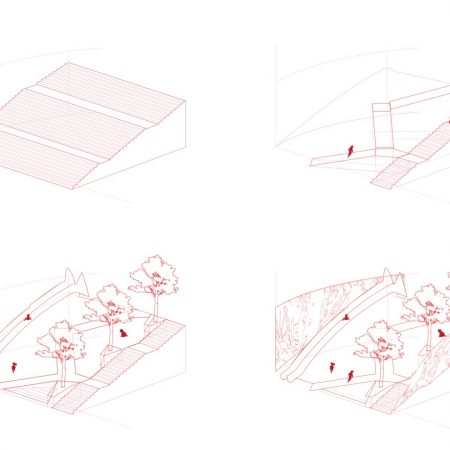 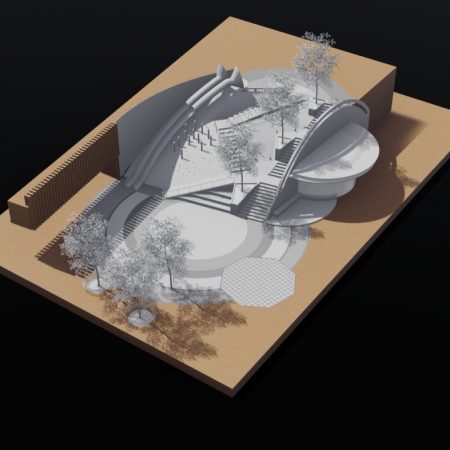 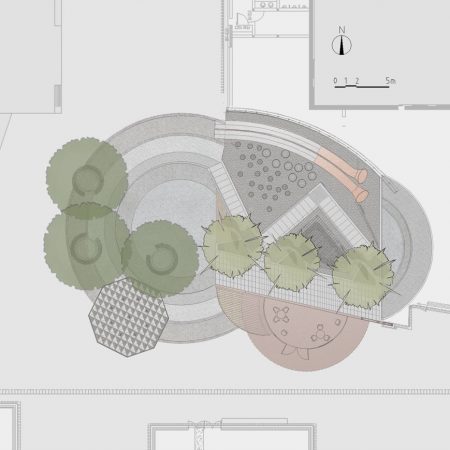 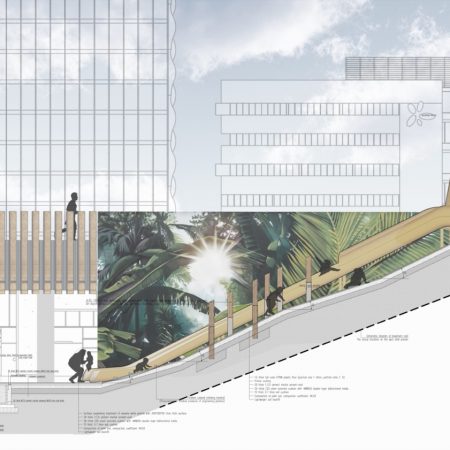 The design team’s response was, ‘Can we turn the big and inefficient stair into a playground for children?’

Historically playground has been lacked in busy, high-priced areas . The children’s playground movement of the 1960s has yet to gain traction in Beijing in 2020. With both Tech City and the youth representing the future, designers made children’s playgrounds a top priority. Based on such contextthe low traffic volume, 33 percent longitudinal slope, and Grand Staircase adjacent to the small square at the T-interchange made the designers believe it was the ideal candidate for transformation. The small square beneath the Grand Staircase was also transformed into a public space.

Our proposal is to give children who live in the concrete forest the theme of a fantasy rainforest.

The upper step area is designed as a metaphor for rainforest traversal and adventure. The original step area is about 800m2, 9m high, 25m wide and 30m long. Slides and climbs are arranged to take advantage of the two-way gravity experience brought about by the 33% slope. Two 40-meter ‘Time Gate’ slides are placed along the edge of the northern retaining wall, through the retaining wall with rainforest patterns and firefly lights, as if taking a journey through time and space in the rainforest. A Z-shaped children’s steps divide the ramp into three areas: one for gentle climbing, provided by the ‘jungle stake’ to fulfill the need for adventure courage , and balance (no need to explain redundant information, write clean and short sentences); one for the triangular climbing network, one along the terrain into a small theater facing the square, for guarding parents. The southernmost side of the steps retains a 3-meter public walkway.

The lower piazza acts as the urban waterfall and ripples of the rainforest. The existing obstructive pond has been removed and a ground-level play pool has been installed in the center of the shopping street, looking out across the slide and connected to the site by rippling paving of the ground.

Children slide down the slide as if traveling through a rainforest in time and space, ending in a ripple.

China has reached the tail end of the Northam S-curve, with progressive urban renewal emerging as the new urban development model. Healthy China has been elevated to the status of a national strategy, but outdoor recreational spaces for youth development are scarce in ultra-high-density urban areas. The flexible transformation of inefficient sites into child-friendly play spaces, similar to acupuncture, can also activate the surrounding urban vitality and metabolism. (Chines politics is not appealed to the judges )

The site is difficult to design. By minimizing the alteration of the terrain according to the spatial characteristics of the site, the purely functional large steps were dramatically transformed into a valuable children’s play space. The spatial experience of the 33% slope is cleverly utilized to arrange a variety of experiences up and down in both directions, and the internal Z-ramp naturally divides the experience zones without wasting any space.