Poppy Plaza is the first of a series of planned nodes along The Landscape of Memory, a 9.5 km pathway project running parallel to Memorial Drive and was designed to re-honour the 1922 planting of a tree along Memorial Drive for every fallen soldier of W.W.I. Two distinct and interrelated surfaces, one of wood and the other of weathering steel, are conceived as transformative systems that facilitate site-specific framing and catalyze different opportunities to occupy, engage and connect. Commemorative elements throughout the project, such as water-jet narratives, an illuminated bosque of trees, and illuminated sentinels, offer an inclusive reflection on the sacrifice, honour, and hope associated with periods of conflict. 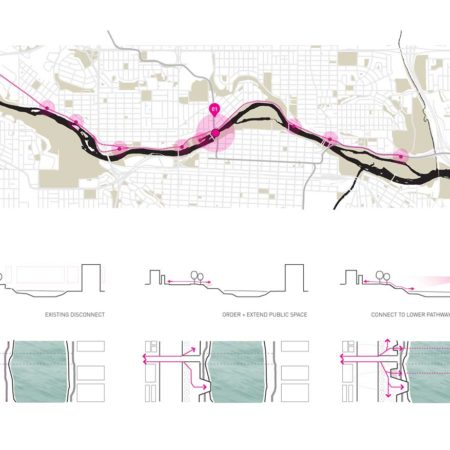 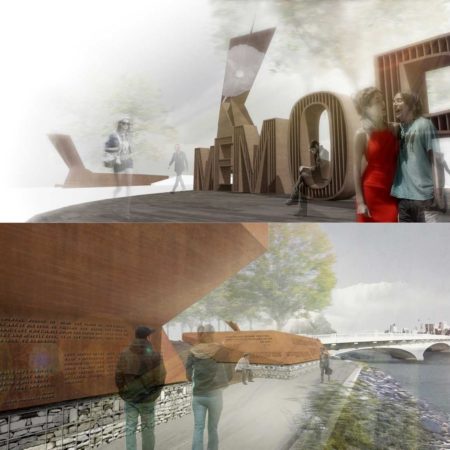 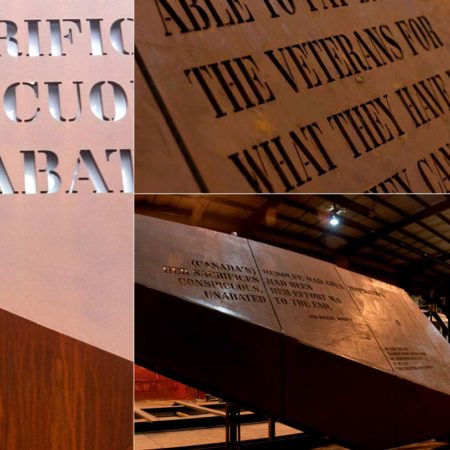 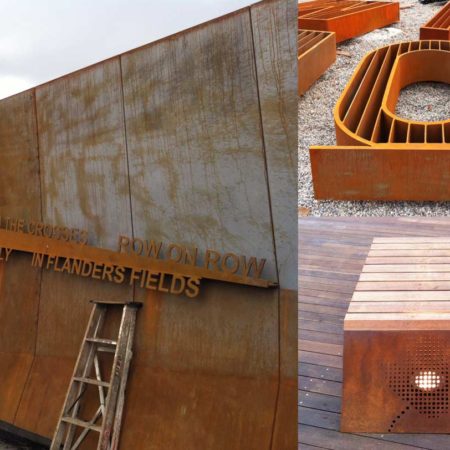 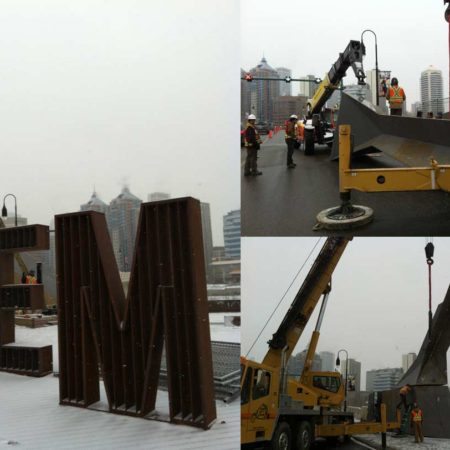 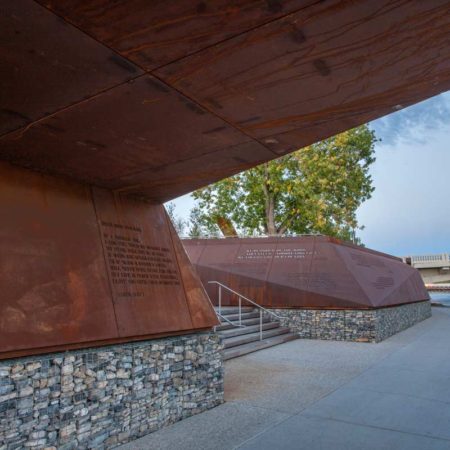 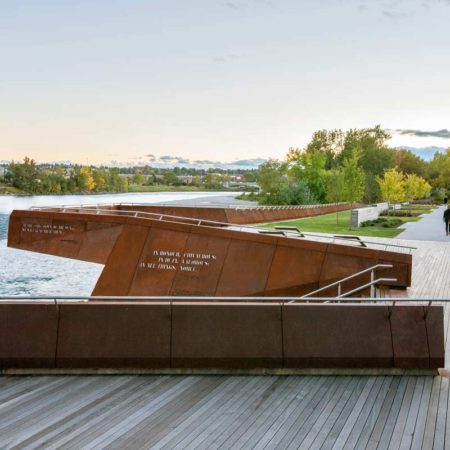 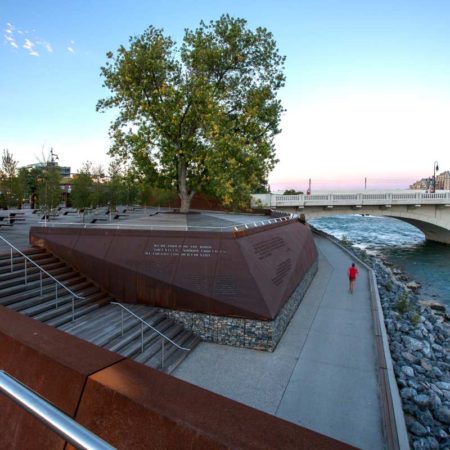 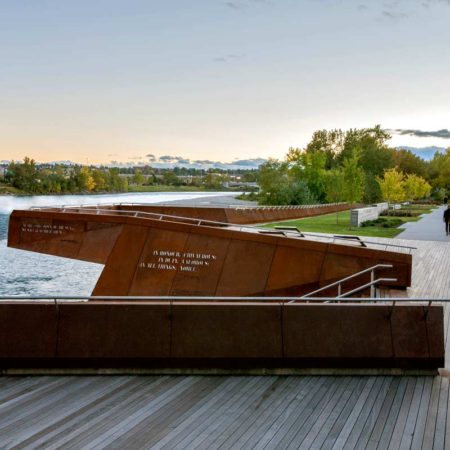 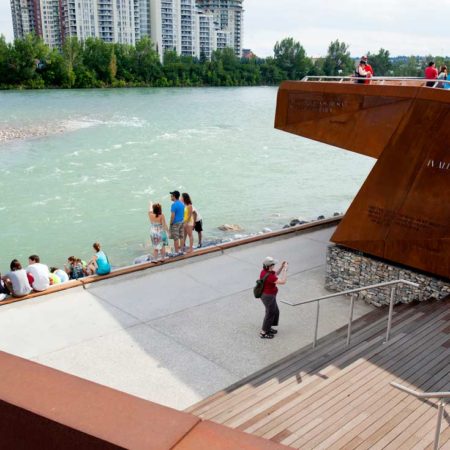 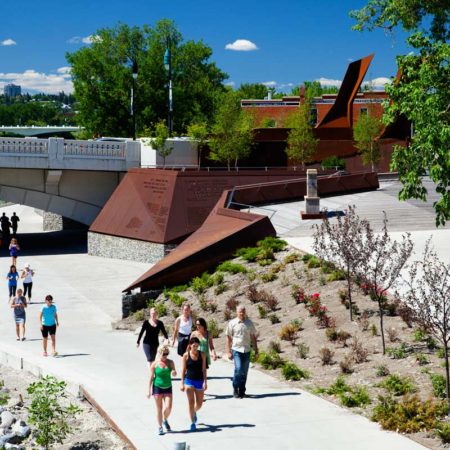 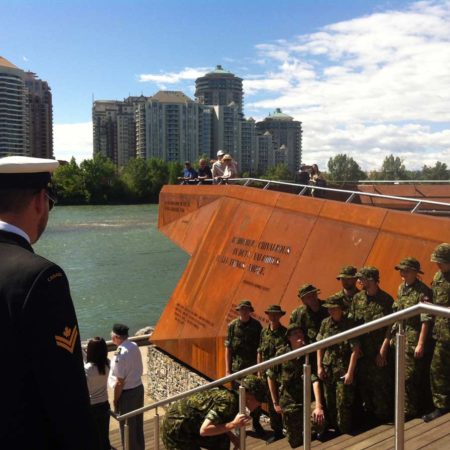 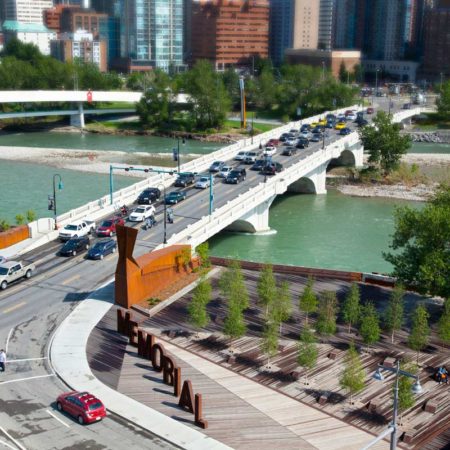 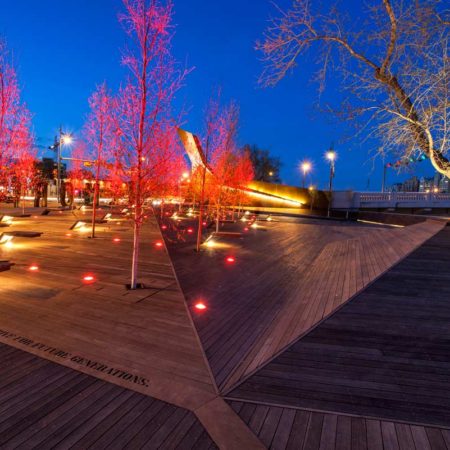 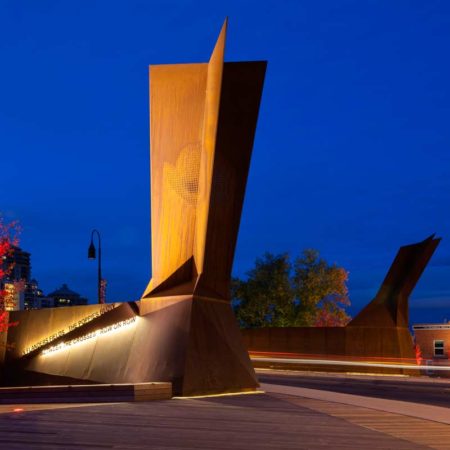 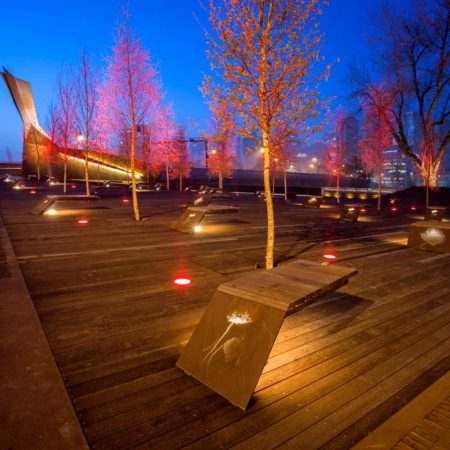 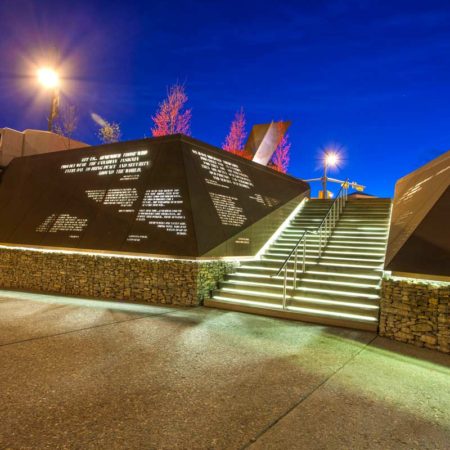 The existing site was a residual green space adjacent to the intersection of Memorial Drive and 10th Street Bridge, (connecting to the downtown core), and is bound by the neighbourhood of Kensington to the north and the Bow River to the south. In part due to the steeply sloped grade to the river, the existing site lacked a connection to the river.

The design was developed to address the following challenges: the connection of disparate access points into the site, access to the river, the resolution of the conflict between pedestrians and commuter cyclists along the river pathway, the creation of a space to accommodate large events and informal gatherings, and the development of an inclusive commemorative voice for the space.

The proposed design not only addresses memorialization, but also resolves immediate urban issues including conflicts between pedestrian users and commuter cycling. In order to improve the quality of experience for all pathway users, two main areas are addressed. The first area is the path under the Louise Riley Bridge which is constricted and has poor sightlines. The solution is widening and extension of the pathway at the lower river level, thereby eliminating blind spots. The widening at key locations also accommodates commuters and passive users in a safer environment as well as providing the opportunity for moments of pause at commemorative areas along the weathering steel walls. The second area of congestion at the LRT Bridge is the convergence of many modes of circulation and speeds of users. In order to resolve these conflicts the river path is extended under the LRT bridge, dividing functional circulation. Higher speed bicycle commuters are moved closer to the river edge. In the future the lower pathway can be extended further east to resolve roadway edge conflicts and eliminate the steel guardrail on Memorial.

Lighting in key locations is incorporated as a second strategy to accentuate the experience of memorialization. The first location is the Louise Crossing connections created by the weathering steel walls. Narratives relating to stories of our soldiers and their families at home are laser cut into the weathering steel walls and back lit. The second gesture is the illumination of the existing trees along the East-West pathway as a means of honouring these WW1 living memorials. The final lighting strategy involves the creation of illuminated sentinels located on the South bank of the river, shown in the image above on either side of the bridge, as a way of extending the pattern of illumined trees and as a means of synchronizing the plaza gathering areas with the North to South river views. The sentinels evoke a sense of connection with distant places or loved ones such as a soldier or the family at home. The two strategies work together to unify and to honour our individual and collective memories, expanding the notion of memorialization in a more inclusive, open-ended and timeless way.

The design solution hinged on two distinct and interrelated surfaces: one of wood and the other of weathering steel. Both surfaces were conceived as transformative systems that facilitate site-specific framing and catalyze different opportunities to occupy, engage and connect.

The weathering steel surface retains the 100-year flood bank while strategically defining a diversity of relationships between the viewer, the river, and views to downtown. One key commemorative gesture is the creation of two stairways connecting the plaza to the river walk below. Here, a series of narratives are water-jet cut from the weathering steel surface and back-lit, portraying different voices that speak to the sacrifice, honour, and hope associated with periods of conflict. In addition, the descent through and along the weathering steel frames a view across the water to a pair of illuminated sentinels on the south shore of the river, a conceptual “space apart” reflected in the water and speaking to the separation of loved ones during war time.

The wood surface is a topography that sutures disparate spaces and negotiates several grade changes into a singular, continuous surface. Folds within the surface provide various urban amenities, such as surfaces for seating, eating, and commemoration, including the re-honouring of an original 1922 heritage tree on site. This new space can be used to accommodate both large events but also informal gatherings and moments of quiet introspection.

The formal interaction of the wood and weathering steel creates a complex experience that alternately defines and releases space and spatial associations with the surroundings. There is a strong use of movement to create a shifting perspective as the viewer engages with the plaza; the commemorative elements oscillate between solidity and ephemerality, akin to the nature of memory itself.

Within this restricted material palette, body-sized weathering steel letters signal and define the presence of the public space to Kensington and adjacent vehicular traffic. The new illuminated bosque of trees re-honour the original trees planted along Memorial Drive and were placed so that large gatherings of people can occupy the space with unobstructed views under the canopy, while concurrently providing more intimate spaces and sheltered space for smaller groups or individuals. 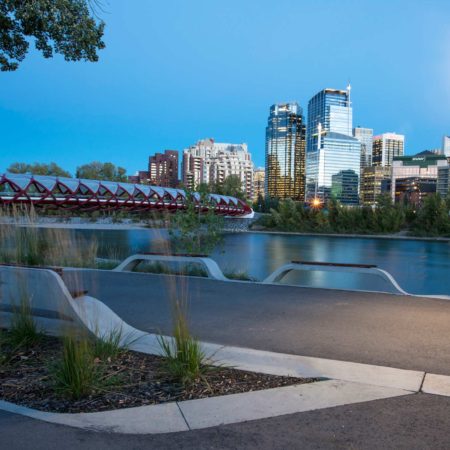