The Prins Hendrikzanddijk deals with a dynamic landscape system – a waterfront that faces rising and unpredictable waters. They introduce a dialogue with the native forces, involving them in the emergence of the ‘islands’. The project addresses the interaction between liquid and solid, the still and the moving. It invites biodiversity, offers a beautiful space for recreation and, most of all, excellently illustrates an alternative way of design by working with time, instead of working against it.

Situated on the most western side of world heritage site the Wadden Sea, earth’s largest tidal flats system, lies the island of Texel. Protected by the sea dunes on the westside, its inhabitants have over the course of centuries increased the size of the island by way of ‘inpoldering’ -an act the Dutch have become famed for. Climate change and rising sea levels however pose a threat for the dikes separating this land from the Wadden Sea. The Waterboard ‘Hollands Noorderkwartier’ asked consortiums for bids that would safeguard the island against rising sea levels while respecting the site’s unique location.

The winning bid designed by Feddes/Olthof (in a consortium of Jan de Nul Group, Altenburg&Wymenga and Waterproof BV) is The Prins Hendrikzanddijk, a new coastal landscape hugging the old sea dike. This landscape of dunes and mudflats creates a safe water barrier and preserves precious farmland while giving a boost to the protected ecosystem of the Wadden Sea. With the construction of the Prins Hendrikzanddijk 200 hectares of nature is created on a dynamic spot in the Wadden Sea. In order to create this landscape gradient, 5 million cubic meters of sand was placed and 2 million marram grasses have been planted. Received with great enthusiasm by both the Waterboard ‘Hollands Noorderkwartier’ and the islands inhabitants, the project enjoys a great deal of promotion by both, emphasizing its worth for ecology as well as local recreation. 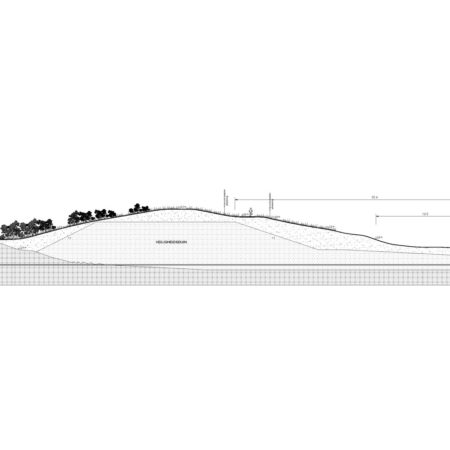 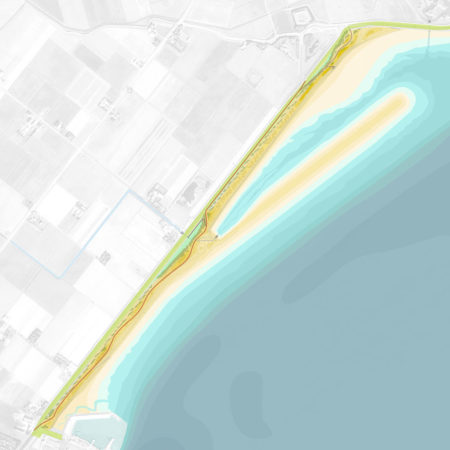 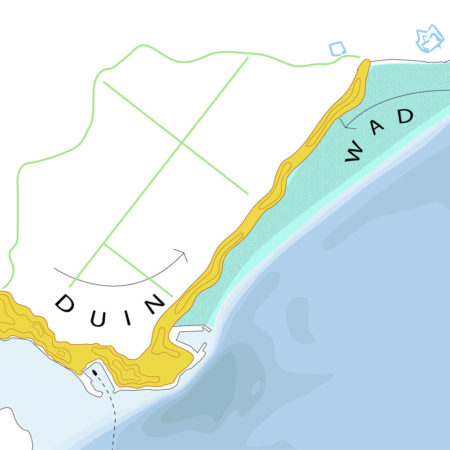 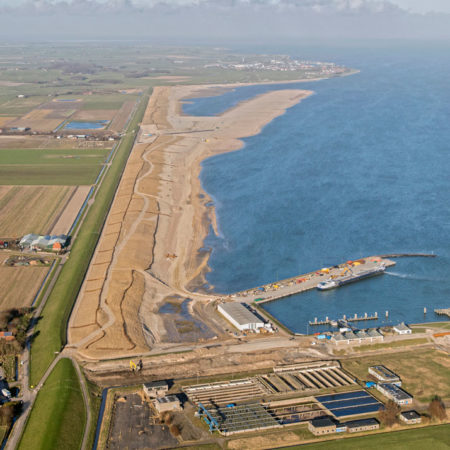 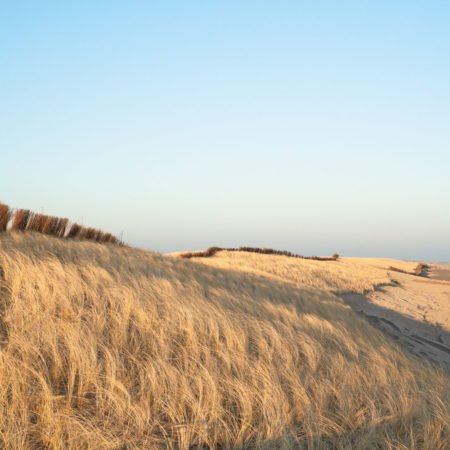 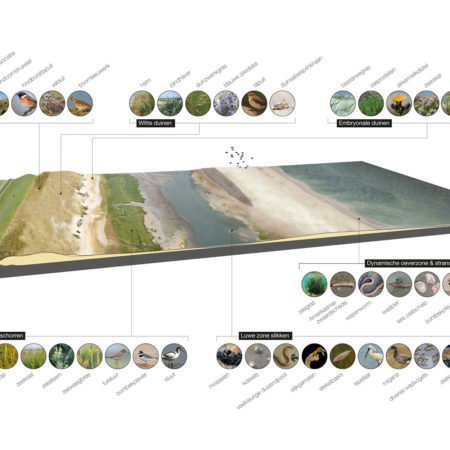 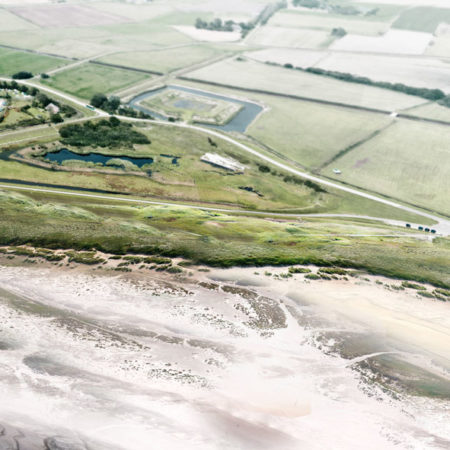 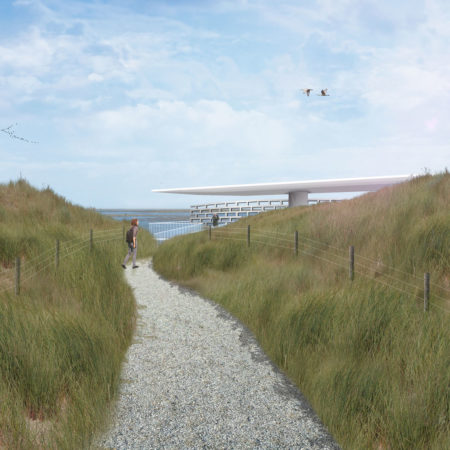 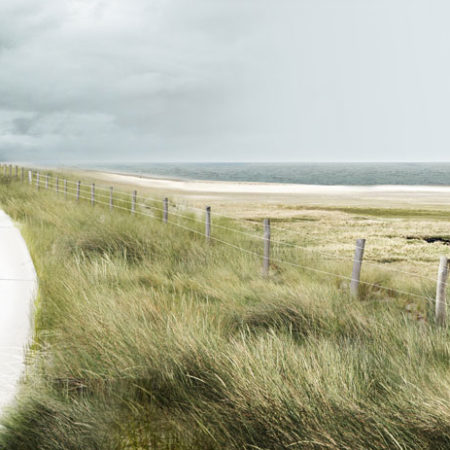 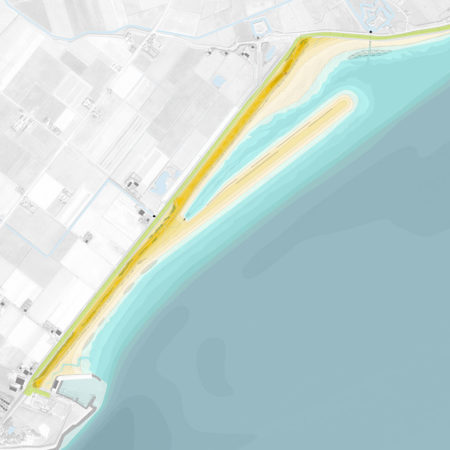 While developing the Prins Hendrikzanddijk masterplan, an incredibly amount of energy was poured into the design of a landscape that looks and behaves naturally. The height and shapes of nearby dunal areas inspired the design of the new dunes. In the masterplan, three dune heads rise above the landscape, with rows of smaller sand dunes in between them, each differing in height and micro-relief. This results in a variable height across the dune row from 8 to 9,5 meters above average sea level. The fluid nature of the dunes allows for a relatively simple and cost-effective alteration if future climate-models deem this necessary. By keeping the dunes however as low as possible, sand spray into the polder is kept to a minimum. As a significant amount of sand spray was expected during and right after construction special interventions were designed to keep the sand in place while plant life settles in.

From the southern tip of the site a sand ridge extends into the water, running parallel to the dunes. This strip of sand, the ‘beach hook’, protects the shallow zone that lies between it and the dunes. The design allows for sea water to penetrate this zone all the way up to the outlet of a pumping station. The salty sea water and sweet water from the polder thus create a brackish environment in which shrimps and sticklebacks are food for the spoonbill. Swallows will form in the intertidal area while salt marshes will form on higher grounds.

Thanks to the design and skillful construction of a detailed micro-relief, Prins Hendrikzanddijk will become home to a great variety of plant and wild life. In the hollow between the old dike and the dunes additional sand is applied for a soft gradient between the two, creating a habitat for a wide range of plants, animals and insects. At the base of the sea dunes a surplus of non-planted sand is applied to stimulate the natural creation of embryonic dunes in which species such as sea holly will grow. Further up the beach circular banks of extra fine sand will be made. This sand will spread under the influence of wind and water, creating a feeding ground for wading birds. On the inside of the beach hook elongated ridges of scallops are placed as a breeding ground for the stern and the common tern.

Connecting the old and new

Over the entire length of the coast, a new cycling and walking trail will offer visitors stunning views onto the Wadden Sea from between the rolling dunes. Connections linking the polder and dune landscape are made at three points. On the south side the nature reserve connects with a plateau to the dike. Halfway, a dune valley offers a protective entry into the dune landscape. More up north a walking trail leads up to a new viewing point for bird watchers. This pavilion, designed by architect/sculptor J. Körmeling, is an elongated, light and elegant building that appears to hover. The shape makes it an integral part of the landscape, preserving its open and linear character. As the pavilion protrudes from the dunes, visitors gain an unobstructed view in all directions while birds are left undisturbed.

The Prins Hendrikzanddijk signals a new direction in the Dutch’ relationship with water. Unique in its approach to coastal defense, it takes up the opportunity to further enrich the invaluable landscape of the Wadden Sea and the island of Texel. 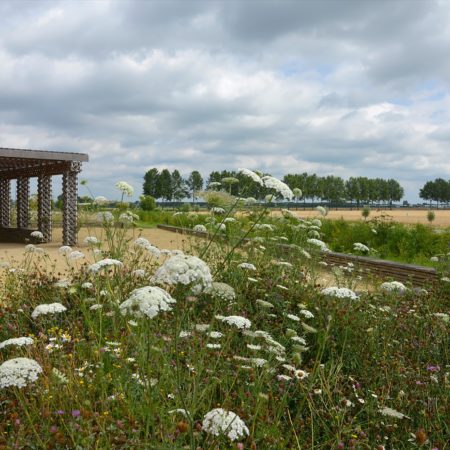