The starting point of the project for the renovation of the school yard of the Kern school building was the intention to restore the unity and spaciousness of the exterior spaces, as conceived in its original form in 1904, which had been lost after various renovations. After the most recent one in 1975, the complex lost definitely its former conciseness. The school yard complex is inside the inventory of the public authority for the preservation of historic gardens. It was their demand to restore the former generosity of the schoolyard as well as the historic layout with the hard surface and the stripe with gravel pavement along the row of trees adjacent to the Bäckeranlagen Park in accordance with the 1904 plan. 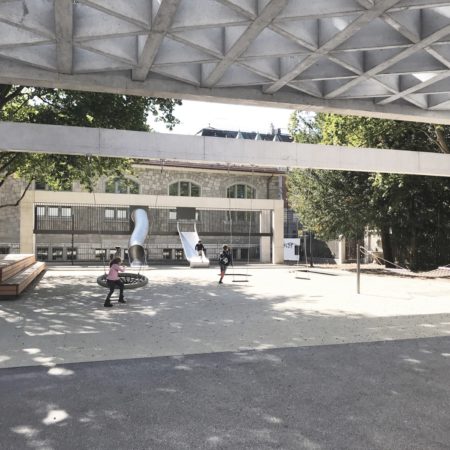 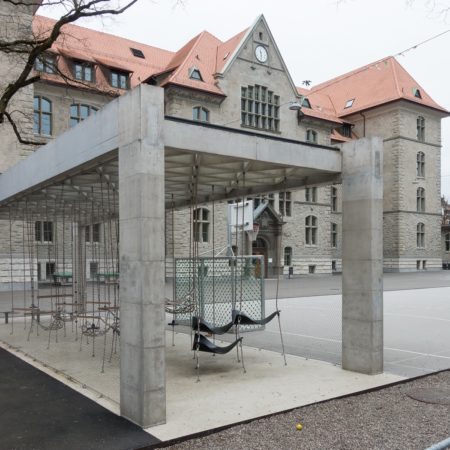 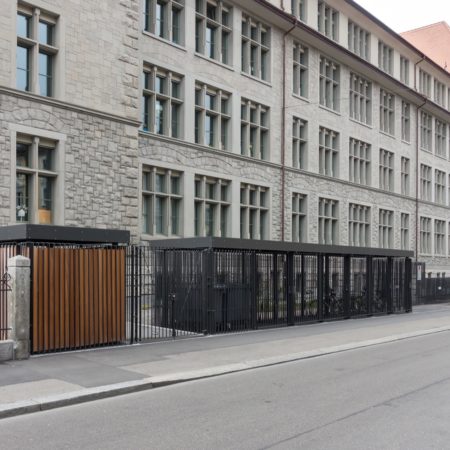 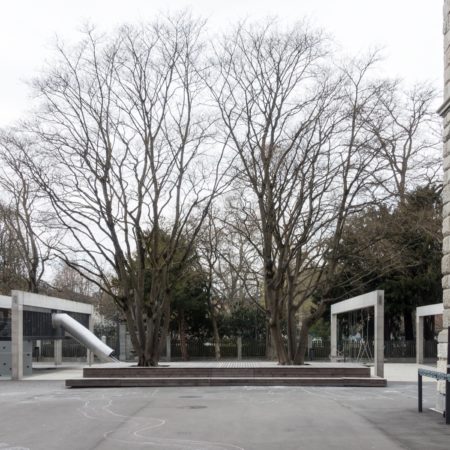 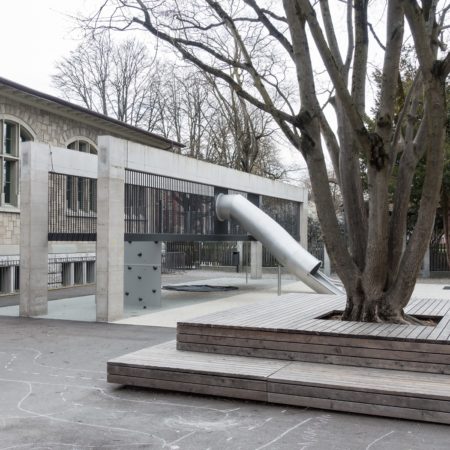 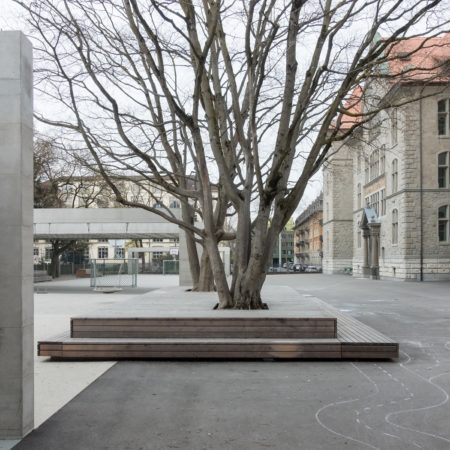 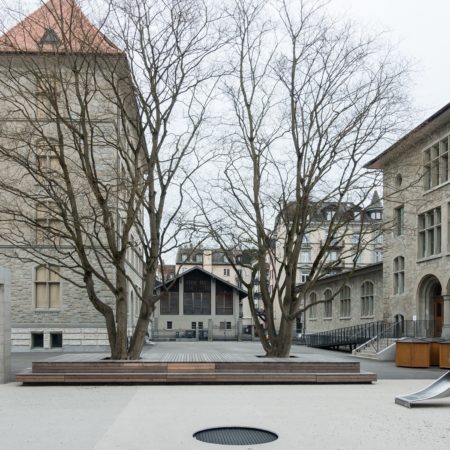 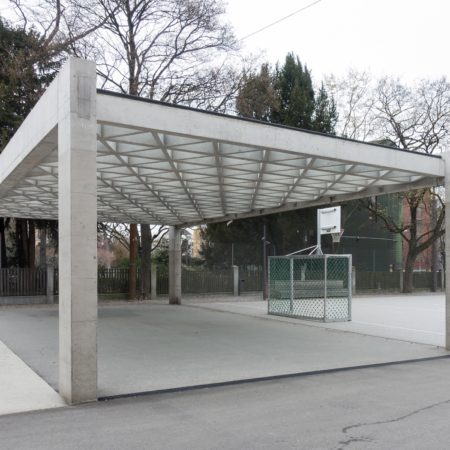 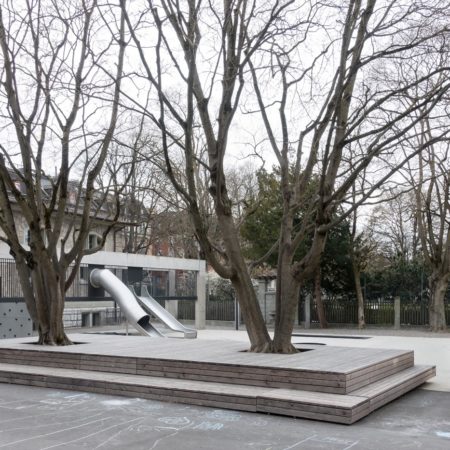 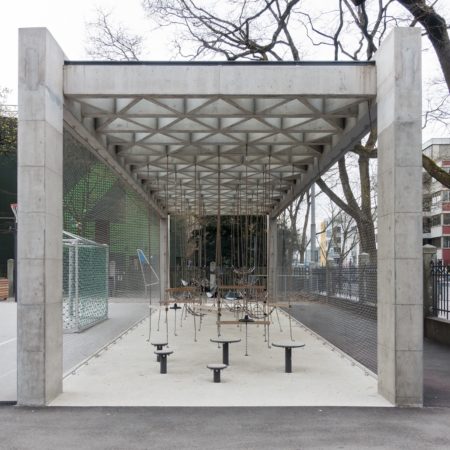 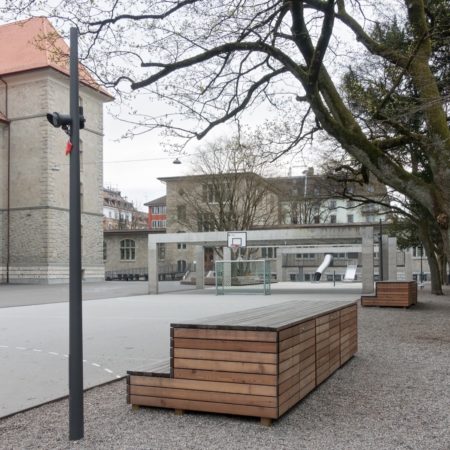 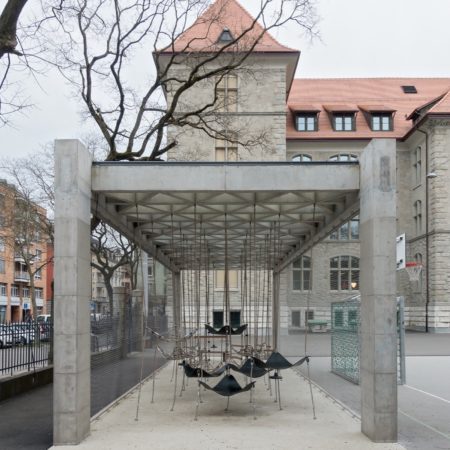 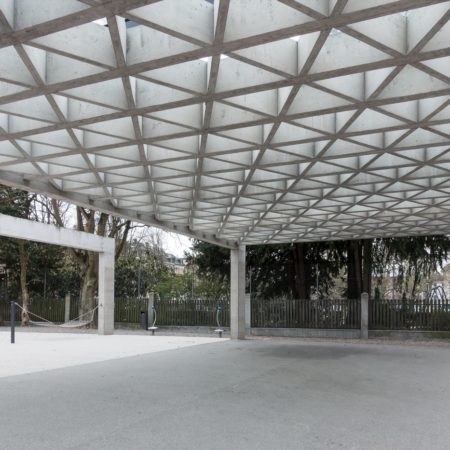 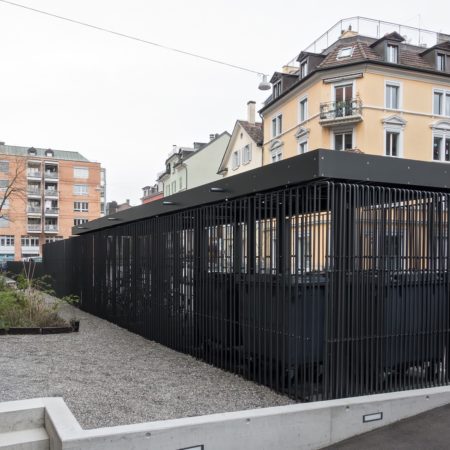 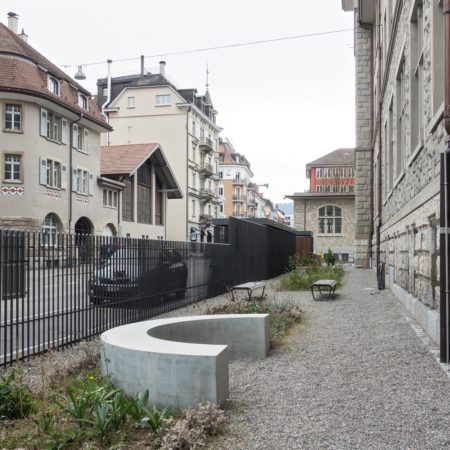 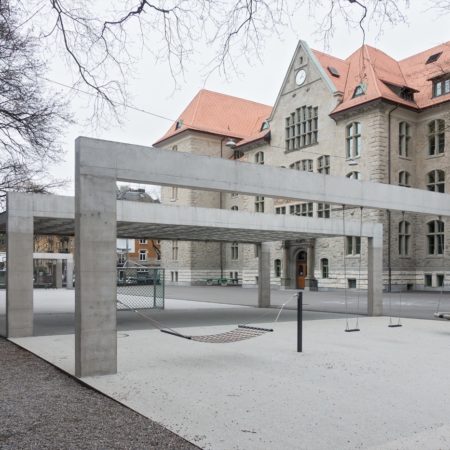 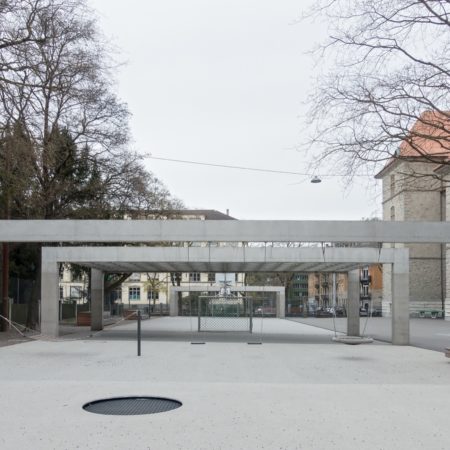 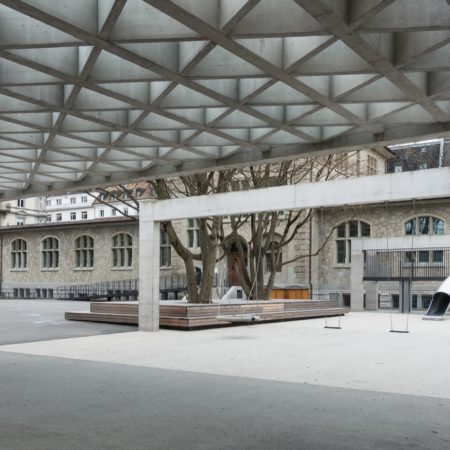 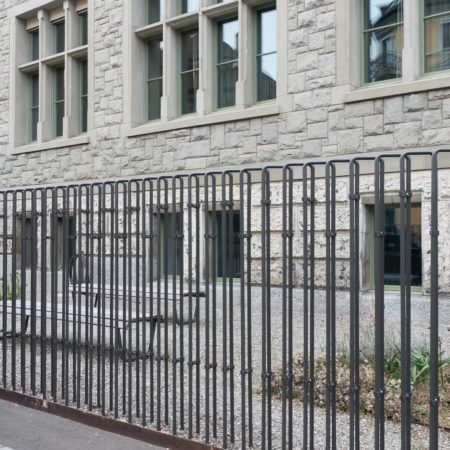 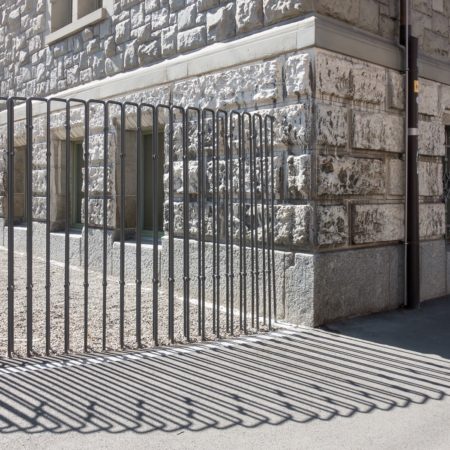 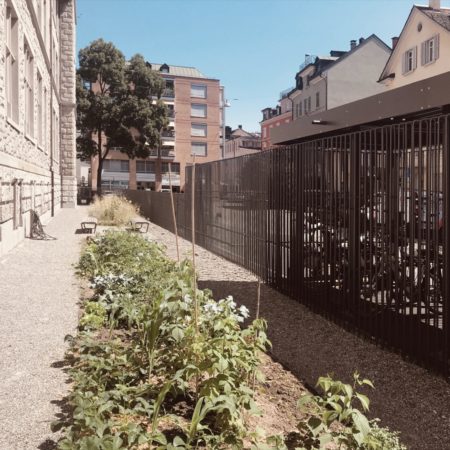 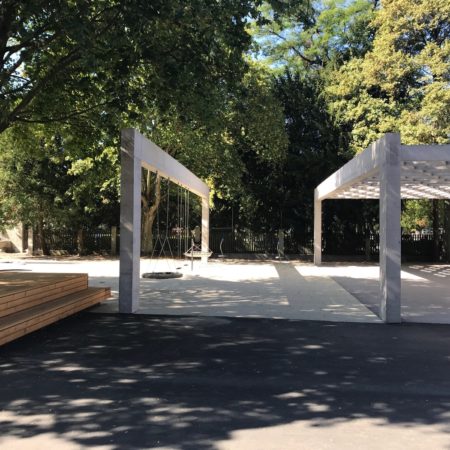 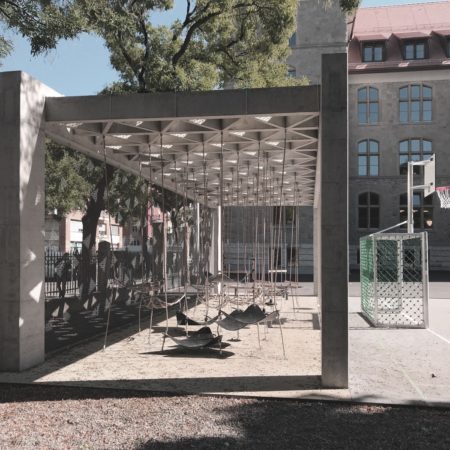 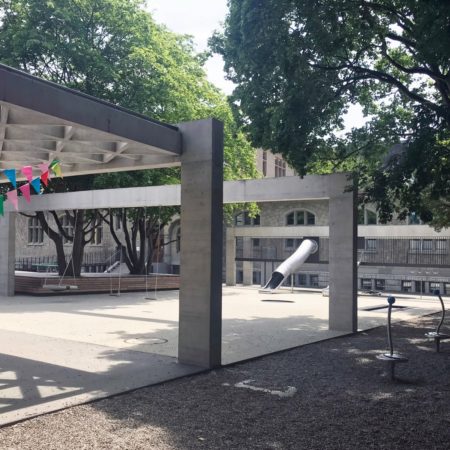 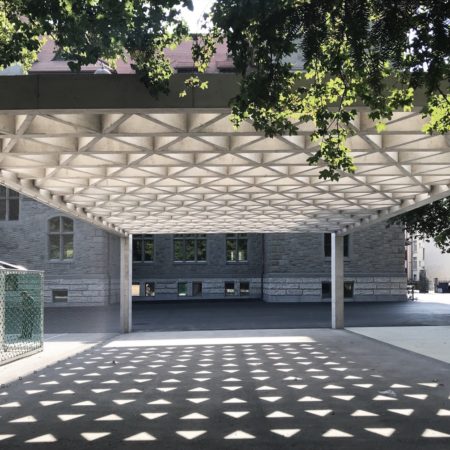 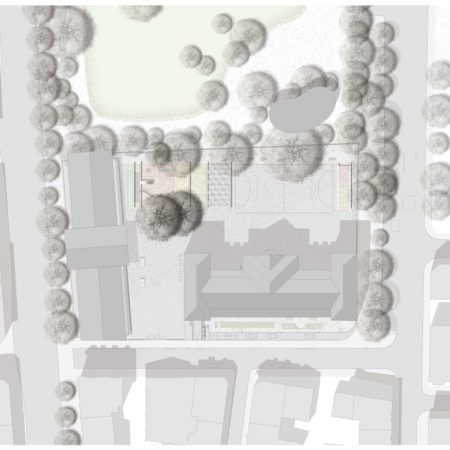 In the present project the layout of the schoolyard was clarified with a few precise measures and adapted to today’s user requirements. The existing structural elements (play elements, tree planting, ball catching fences, etc.) that were added after 1927 were demolished. The most characteristic elements, like the row of trees along the Bäckeranlagen Park, two accentuating maple in the main entrance axis in front of the sports hall as well as the existing cast-iron fence elements were preserved.

An ensemble of new 7 concrete frame girders constitute a formal ensemble on the schoolyard. Playground equipment, such as ropes and climbing frames are suspended from them, as well as ball catcher nets for the sports field. In order to provide a covered area, two pairs of frame girders are covered with a glass roof. The entire playground is divided into various functional areas which form a spatial sequence: Starting in the north-west, a playground area is installed with various equipment elements such as a slide, climbing platform, trampolines leveled with the ground, a hammock and various swings. Adjacent to this is a covered break area, followed by a football field and finally, in the south-east, a rope and climbing landscape. Due to the high transparency of these elements, as a result of their suspension, the schoolyard keeps its spatial unity and spaciousness in the sense of the original concept from 1904.

The edges, which were occupied by various objects and plantings during the various renovation measures, are now cleared up again. Their strength and function as a boundary of a coherent ensemble as well as all the accesses to the area are more clearly visible. An existing group of multi-stem maples, originally planted in a concrete trough, are covered with a generous wooden platform as a seating element in the schoolyard and highlighted as the central reference and meeting point of the complex. The wooden deck can also be used for outdoor lessons.

The school garden is moved to the southeast along the main road, as in the original layout from 1904. Two plant beds are positioned here, and are maintained as a vegetable and herb garden by students and teachers. The layout of this school garden area is very much based on the original plan.

In addition, the infrastructural elements, such as longitudinal parking spaces, lockable bicycle stands and rubbish containers, act as spatial filters to the main road. This peripheral arrangement on the plot perimeter allows the entire schoolyard to be freely used for recreation and playing areas. In order to ensure a high degree of transparency between the school garden and the main road, the fencing is very permeable. It is made up of round bars, each of which forms a pair of brackets. Bracing bracket elements are reminiscent of ornamental elements of classic cast-iron fences. The design of the fence is continued along the main road with all structural elements such as the rubbish container shed, bike shelters, tool shed as a facade element, thus strengthening the unity of these elements. At the same time these buildings appear very permeable and do not obstruct the view of the school building.

Name of the project: Renovation Of The Outdoor Facilities Of The Sports Hall And School Building Kern, Zurich
Role of the entrant in the project: Landscape Designer
Project location: Kernstrasse 45, 8004 Zurich
Design year: 2013-2017
Year Built: 2018 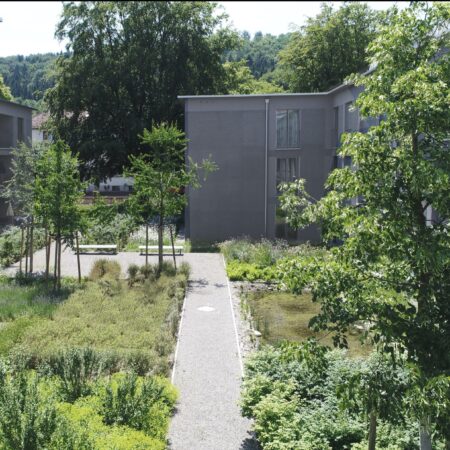