The Pernštejn Highland Garden is a unique example of the development of European culture.

In the 13th century, the then impregnable castle of the Lords of Pernštejn was built in the middle of deep forests. The gardens were founded in 1798. However, there was not enough space directly in the castle area, so the gardens were situated on the slope below the castle.

The whole area is absolutely extraordinary in its conception. It combines elements of an ideological late baroque cascading garden, a formal classical parterre, and an emerging landscape garden. However, the composition of the space under the castle is largely determined by the ingenious placement of the buildings.

The individual buildings represent the major cultures of the world at the time. Antiquizing statues refer to the glory of the Greek gods. The Turkish baths evoke the exoticism of distant lands – and modern oriental elements such as the Chinese parapet and the Chinese pavilion cannot be missed. Christianity is represented by the hermitage and the cenotaph. Egyptian culture is represented by the Pylon, which has a privileged position in the centre of the garden. It is a reference to the Enlightenment, which gave Europe critical thinking, the ability to receive and absorb messages from distant corners of the world, to create a new value of knowledge, and to develop this further. It was the Enlightenment that, for the first time in history, succeeded in placing elements from several different cultures side by side, and intertwining them into a single whole – in this case, a garden. 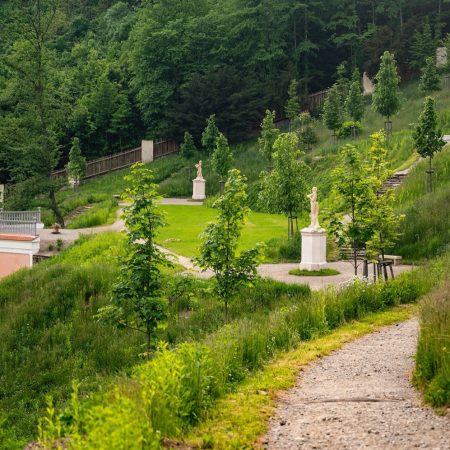 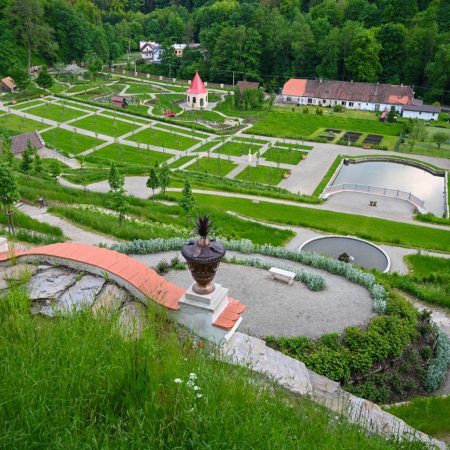 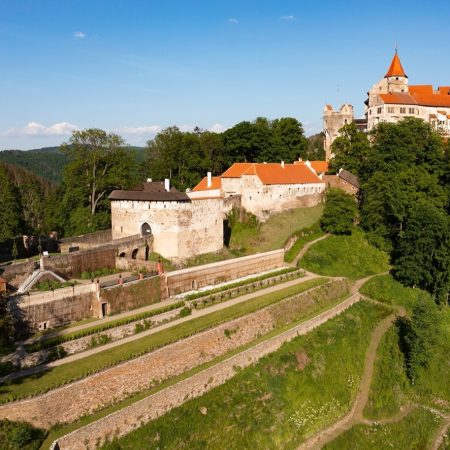 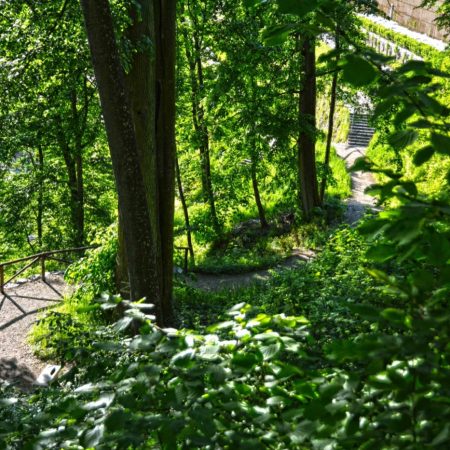 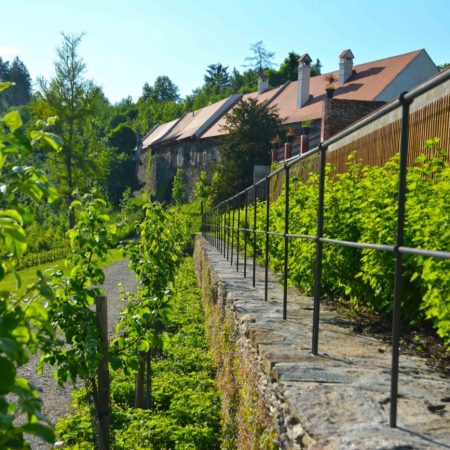 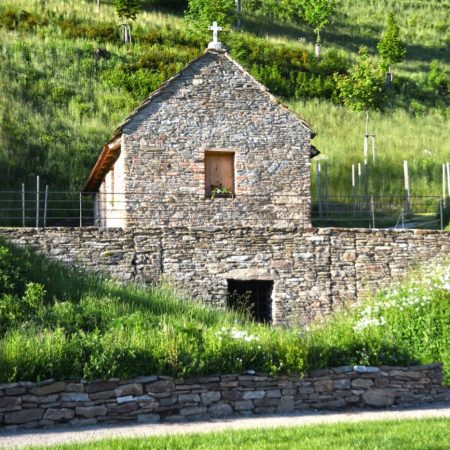 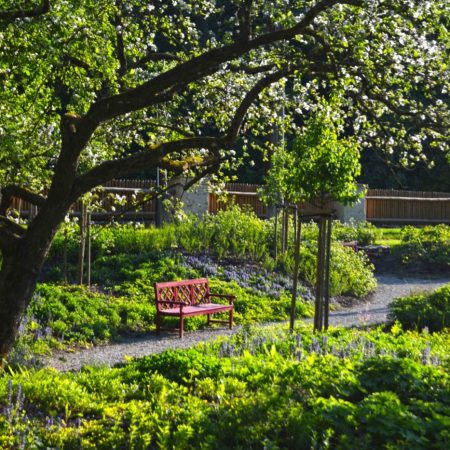 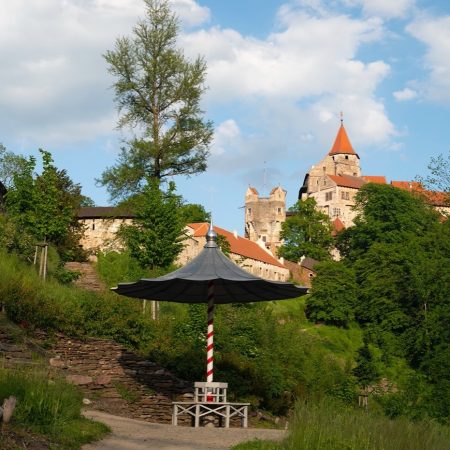 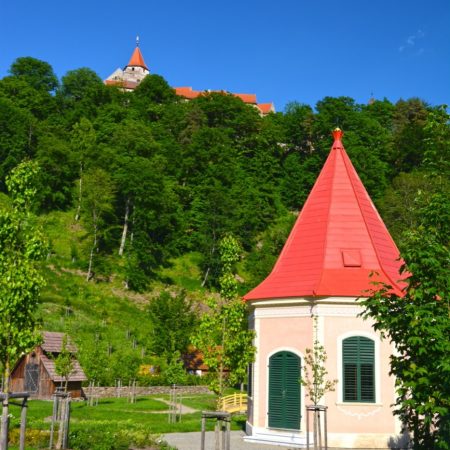 The state of the garden before restoration

The slopes beneath the castle were hidden under a dense growth of trees that resembled a forest rather than a parkland. The fountain was dysfunctional and damaged. The Turkish baths with crumbling walls were threatened with demolition, and the baroque pool in front of the baths was overgrown with plants.

Falling specimens were damaging other trees in the area. Fragments of the orchard and the damaged Chinese Pavilion remained on the plain below the slope.

All the buildings in the garden were in a state of disrepair and had to be restored. The project was prepared by the project’s chief architect, Ing. arch. Marek Tichý.

As part of the demanding restoration, the Chinese pavilion was restored – as well as the entrance from the castle, which also contains oriental motifs that link the two buildings in an interesting way.

In the original layout, on the other hand, the water structures were reconstructed – the Great Pool and the fountain above the Turkish Baths, which has a gargoyle sculpture designed by the architect. The Water Steps with dolphin statues below the Turkish Baths were also designed according to the historical basis and their missing parts were replaced. The wooden halter from the later development period was not forgotten.

Before the restoration, the path network in the garden was almost extinct. The paths were divided into two basic categories according to their operational importance during restoration.
The first category is the backbone paths, which were re-established to provide reliable service to the area not only for visitors but also for maintenance equipment.

The second category is secondary roads that have been established with gravel turf technology. They are designed for inquisitive visitors who want to spend more time in the garden, to explore and experience unusual views from the slope to the parterre.
The cuttings of the paths up the slopes have been widened from their original state to meet today’s standards for visitor traffic.

An oriental garden was restored at the Chinese Pavilion, separated from the parterre by a tall hornbeam fence. Fruit trees, pear and apple trees were planted on the parterre. Below the Turkish baths, pear trees will be planted in a cone.

The old apple trees from the original orchard are represented in the oriental part and will balance the atmosphere of the antiquity of the place.

In addition to the fruit trees, only native tree species such as beeches, limes, maples and yews have been planted on the slopes of the Pernstein garden, composed to form a vegetation linking the vistas of the various historic buildings. The planting is complemented by meadow planting, which also naturally reinforces the slope, supported by hattens. The easternmost part of the garden will be retained as a natural wilderness area with rock outcrops where botanical species formerly grew that were associated with rock and rubble habitats.

As part of the restoration, the entire water system of the garden was created using modern pump technology.
The new water system includes not only the historical elements on the main axis, but also the pool with the fountain, the water stairs under the Turkish bath and the large pool.

Restoring the Landscape for breeding and training of ceremonial carriage horses 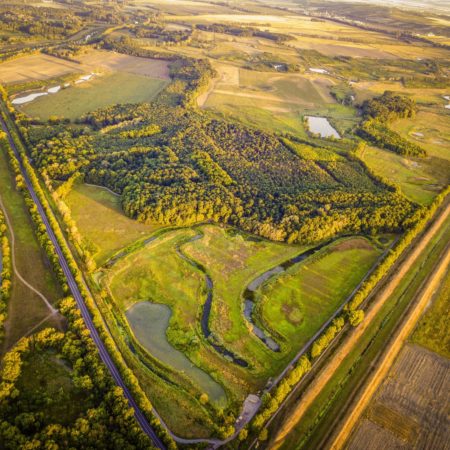