Local residents in the inner city suburb of Richmond have utilised the intersection of Docker Street & Richmond Terrace, at the top of Richmond Hill, for many years as a venue for a diverse range of informal events, from watching New Year’s Eve fireworks above the Melbourne CBD skyline, to a place to enjoy a quiet summer sunset over the iconic Melbourne Cricket Ground. Through persistent pressure, the community was able to convince the local government body, the City of Yarra, that the traffic function of the space was far less valuable than its qualities as a place to meet, catch up & celebrate. 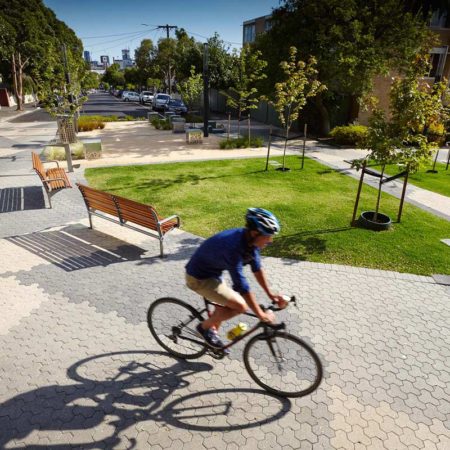 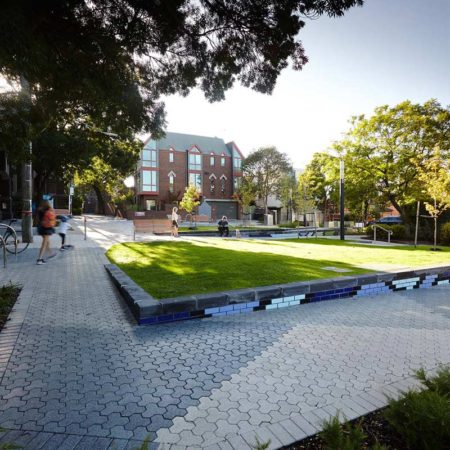 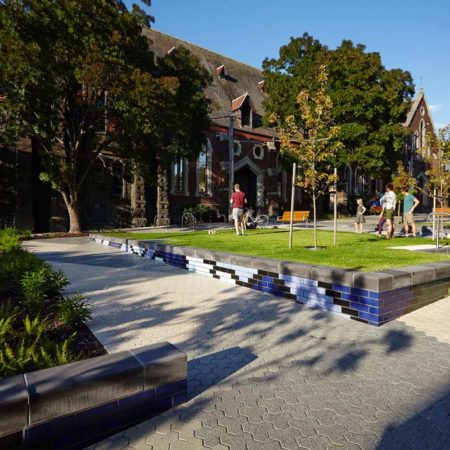 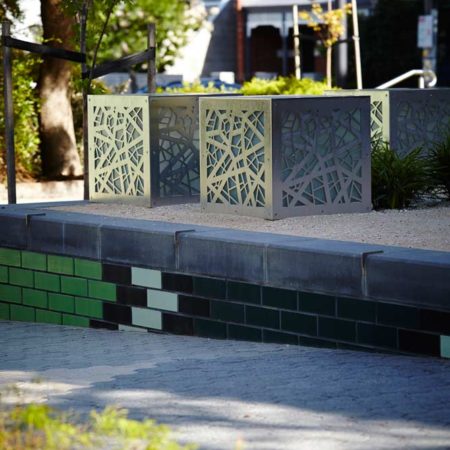 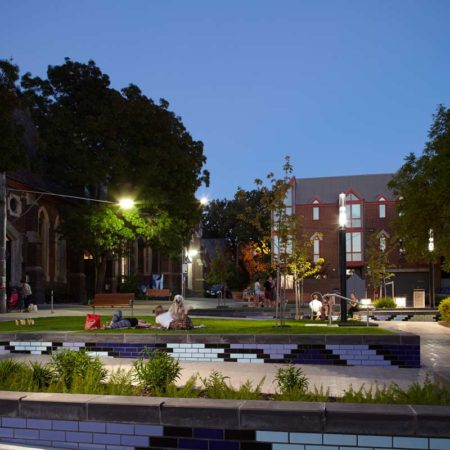 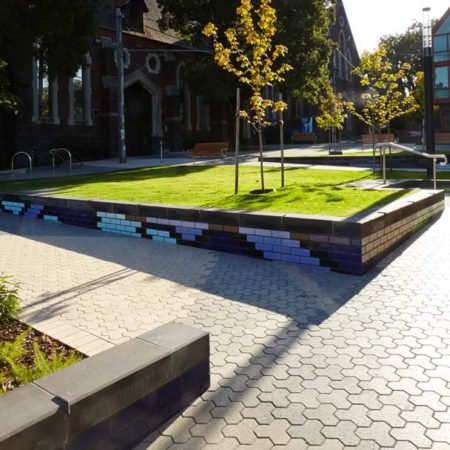 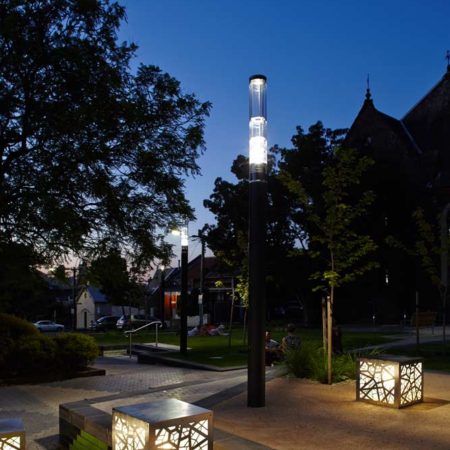 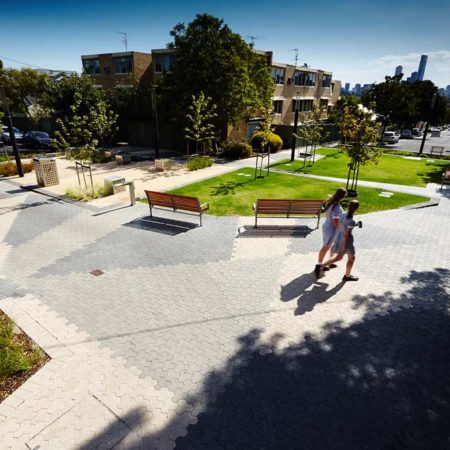 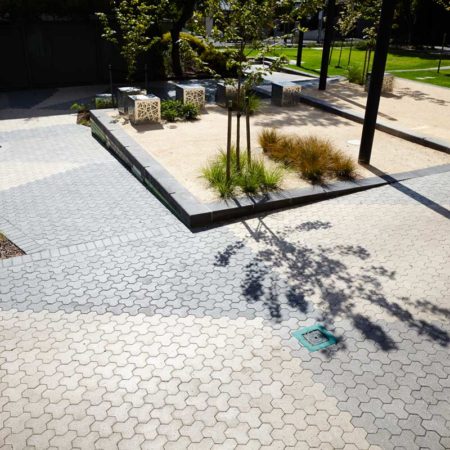 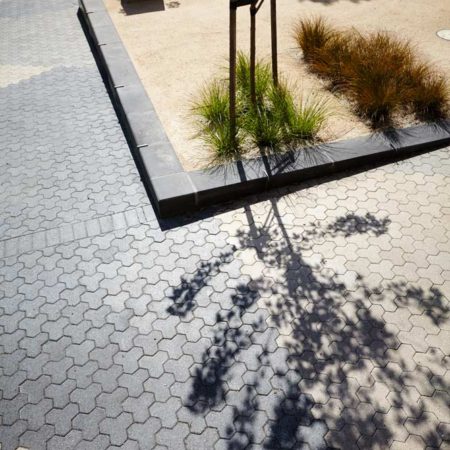 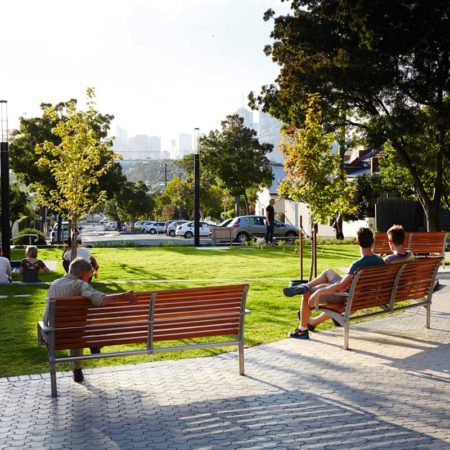 Hansen Partnership was engaged by the City of Yarra as the landscape architect & lead consultant for the design, documentation and contract administration of the project.

The design process was primarily driven by a desire to be respectful of people, place & environment, & delivered this in a manner which enabled the community to not only utilise the space in the manner they desired, but do so in a high-amenity, visually stimulating setting. The design is noteworthy for its extensive use of ‘non-traditional’ materials in an otherwise typical inner-Melbourne streetscape context. Vernacular materials such as bluestone & asphalt were avoided, with a clear intention of demonstrating the ability for a space to be both in strong visual contrast to its surrounds yet still communicate a clear & tangible contextual response.

This context is intrinsic in the articulation of tangible design influences, notably the historically significant architecture of the churches which adjoin the park. The manner in which these design references are communicated is achieved in a highly contemporary fashion. The design utilises manufactured materials & combines them to achieve a composition which at first glance appears in stark contrast to its historic abuttals, but on closer inspection reveals a clear acknowledgement of the architectural importance of those buildings to the history & community of Richmond.

The stained glass windows of the churches are referenced through the design of the pavement pattern, the polychromatic brickwork of the retaining walls & in the design of the stainless steel light boxes, which are scattered throughout the space.

Respect for the environment is inherent via the transformation of previously hard, impervious road surfaces into areas of grass & greenery, with a strong emphasis on the use of native plant species. It is also demonstrated through the retention of a number of existing mature trees which contribute strongly to the amenity & attractiveness of the space.

Another critical design consideration was to recognise & address vehicular access to a number of abutting public & private properties, whilst also allowing for ongoing use of the space as a pedestrian & bicycle route to nearby Church Street. Hansen worked closely with traffic engineers to ensure that functional vehicular access requirements were maintained. However, on the basis of a strong desire to avoid a space dominated by regulatory signage & bollards, a combination of consistent materiality & terraced level changes was employed to deliver a truly ‘shared’ space. There is no discernible change in materiality between the ‘pedestrian only’ areas & the ‘pedestrian & vehicle’ areas, however the delineation of areas available for vehicles is still clear & legible.

Since completion, we have observed the local residents adopt a role of active stewardship over the space, vindicating the design intent of enabling passive surveillance. Furthermore, it has been our observation that the community has truly embraced the space. It has been rare to visit the park & find it unoccupied. The site has been transformed from a nondescript low-volume traffic thoroughfare & location for on-street parking for a few cars to a vibrant & attractive community meeting place.

This project recognises the increasing demand for parkland space in urban areas where population density & built intensification are rapidly increasing. It delivers this space in a form & configuration which balances the desires of the community for a place which can readily accommodate large gatherings whilst equally providing a tranquil environment for a green outdoor space in an area where such space is often scarce.
Richmond Terrace Park has the potential to act as an exemplar project to encourage communities & local authorities to reconsider the role of streets in inner-urban areas where private motor vehicle ownership is becoming less of a necessity & access to well-designed outdoor space is becoming more of an imperative. 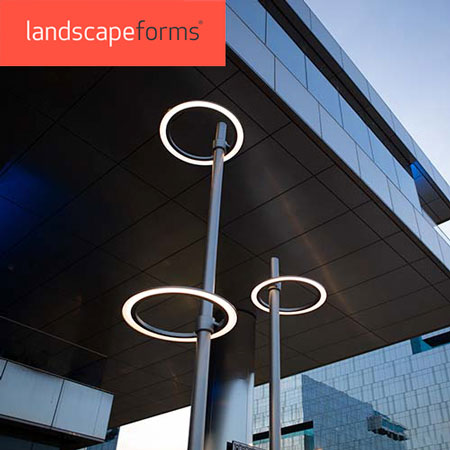