Rio de Janeiro’s Port region has been seen as a deteriorated, industrial and abandoned area for the last 50 years. Located in a strategic district, giving entrance to the city from the North and attached to the city centre, it has become an area of urgent revitalization. The Council, via private investors and taking advantage of the buoyant economy until 2015, has seen the opportunity to recover these neighbourhoods. The Orla Conde & Olympic Boulevard Project is part of the process of transformation and urban re-characterization of the port and centre region of Rio de Janeiro, deriving from Porto Maravilha’s urban operation. The aim of this operation is to “promote local restructuring through the expansion, articulation and re-qualification of public spaces in the region, promoting the improvement of the inhabitants and the environmental and socio-economic sustainability of the area.” 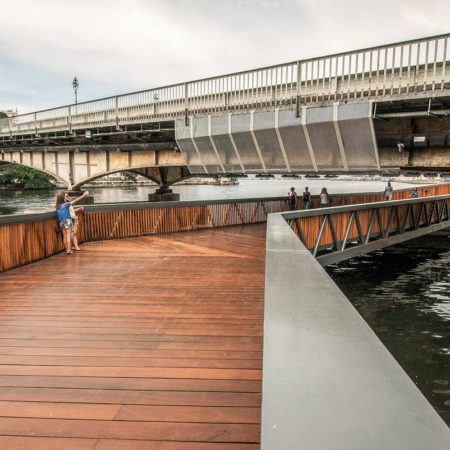 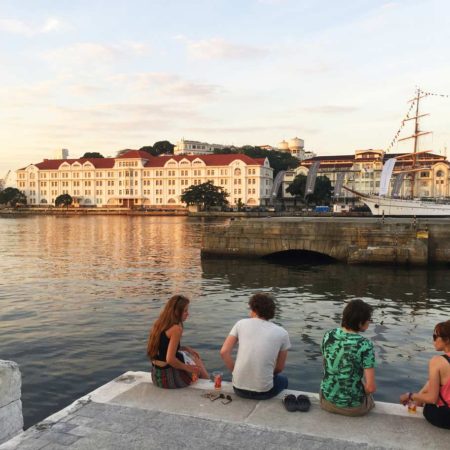 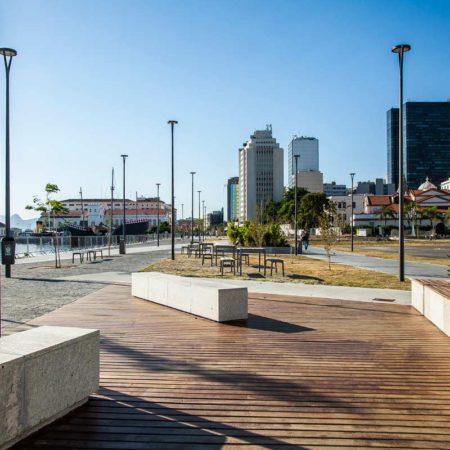 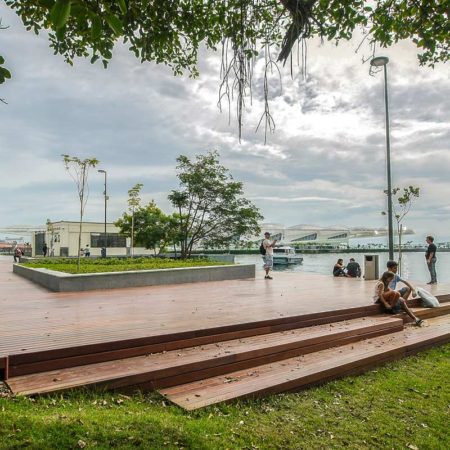 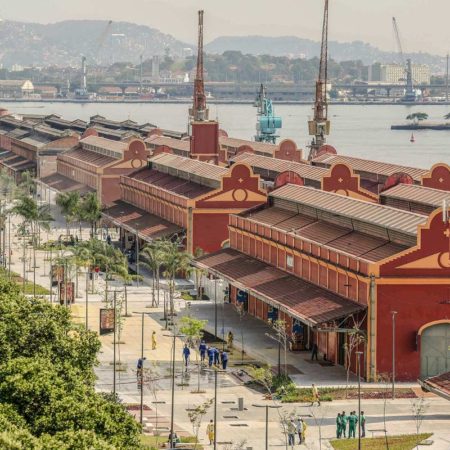 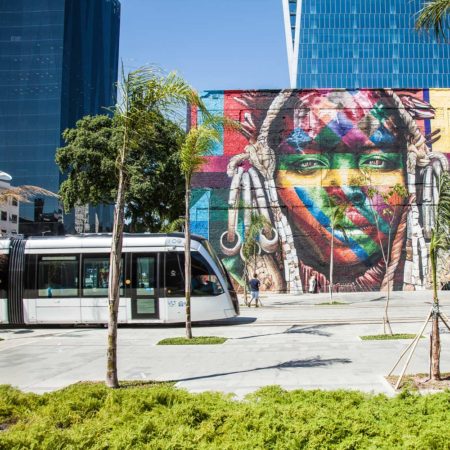 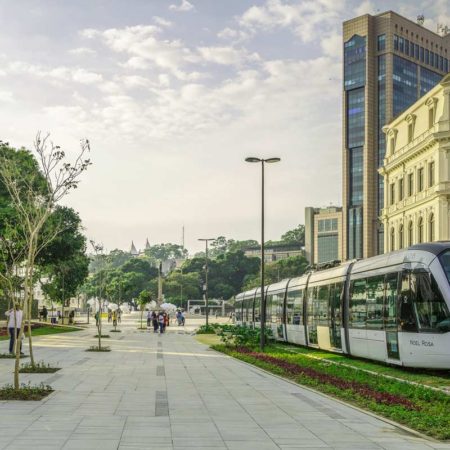 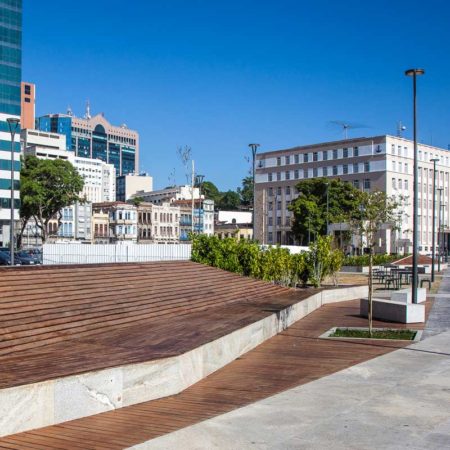 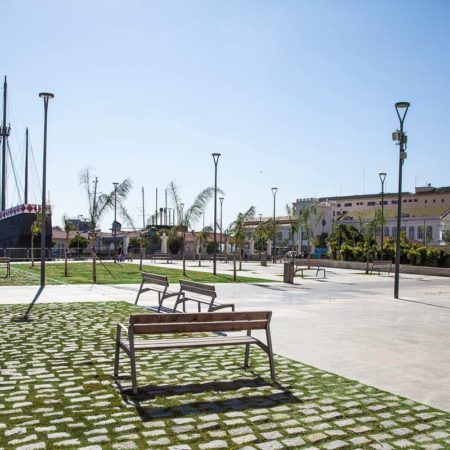 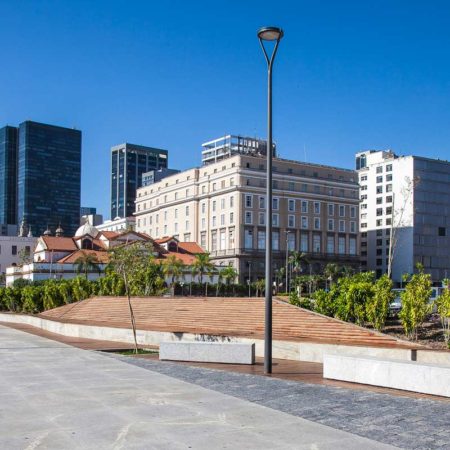 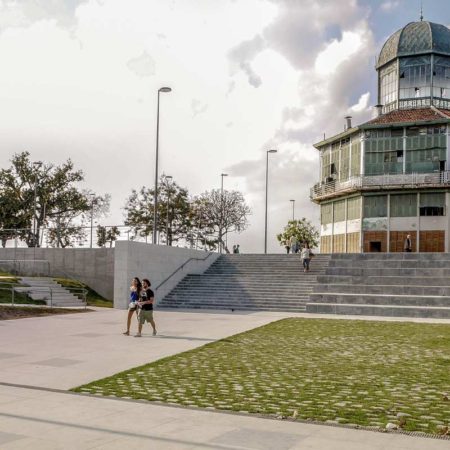 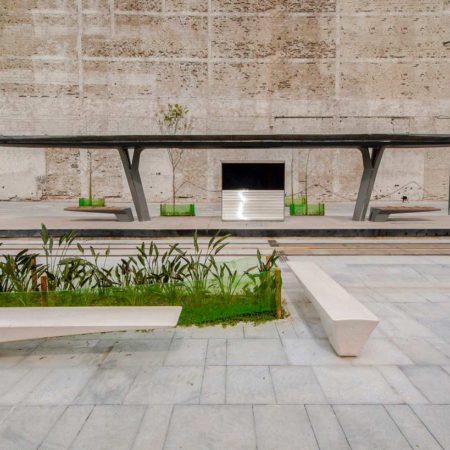 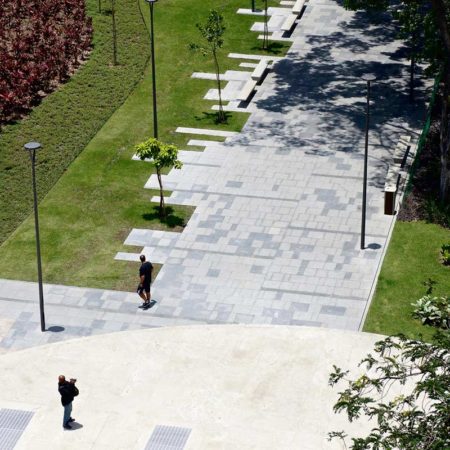 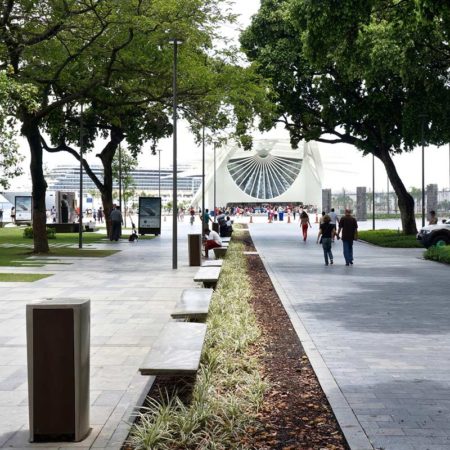 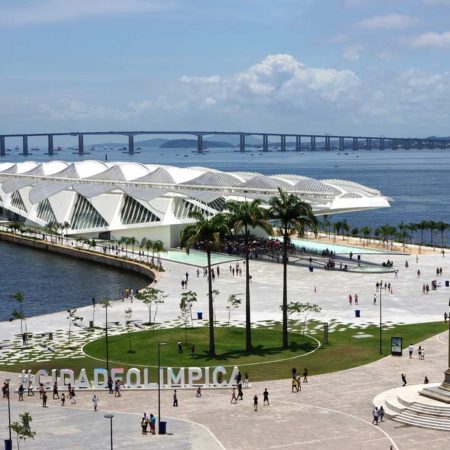 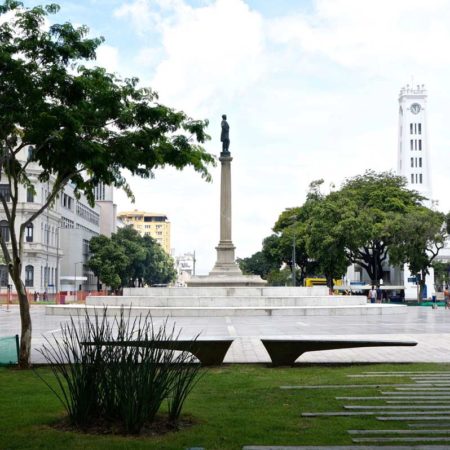 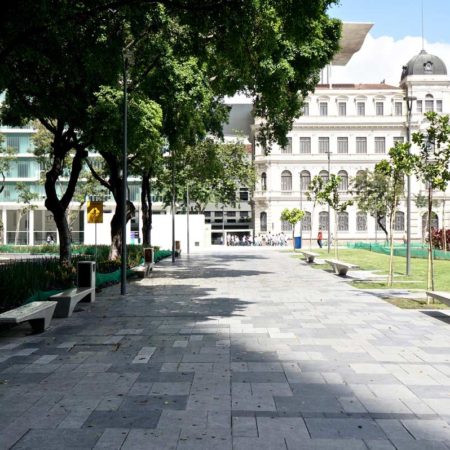 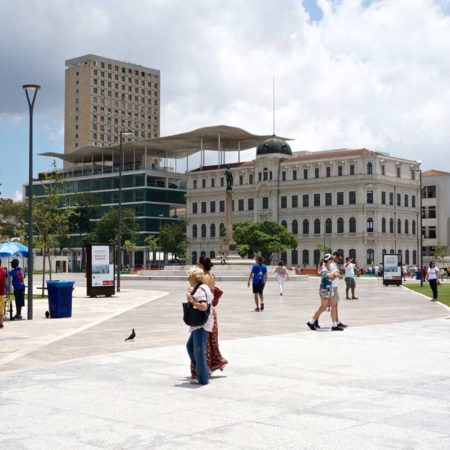 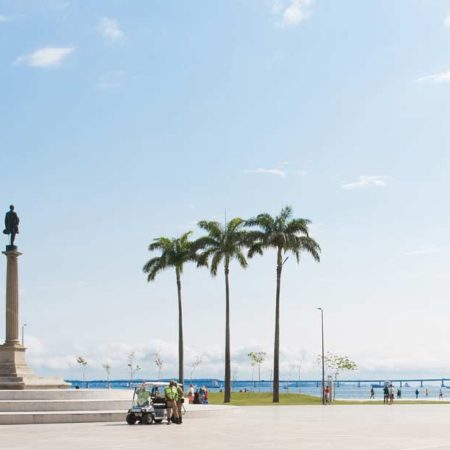 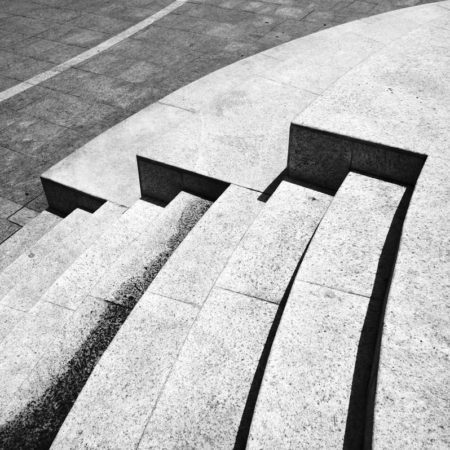 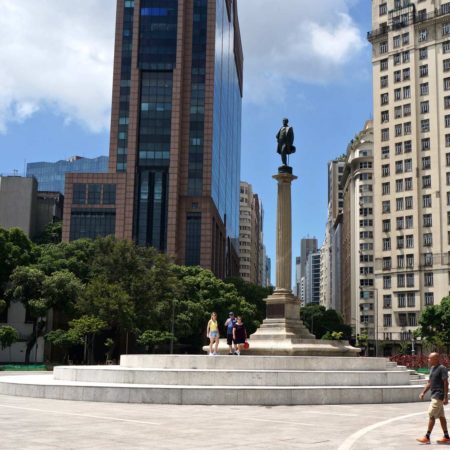 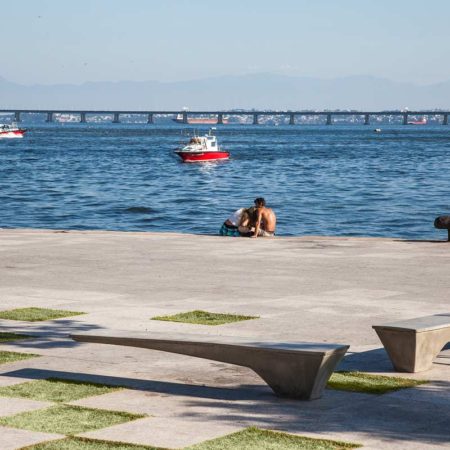 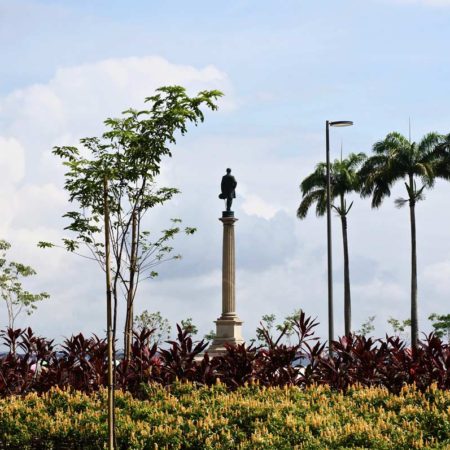 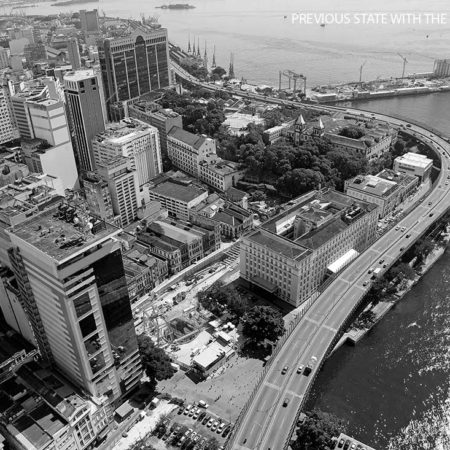 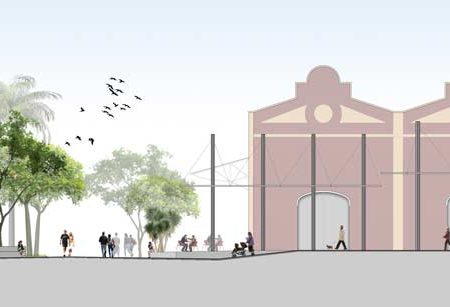 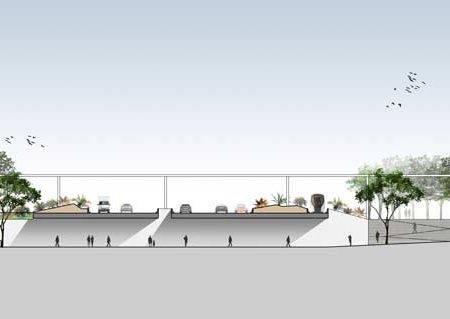 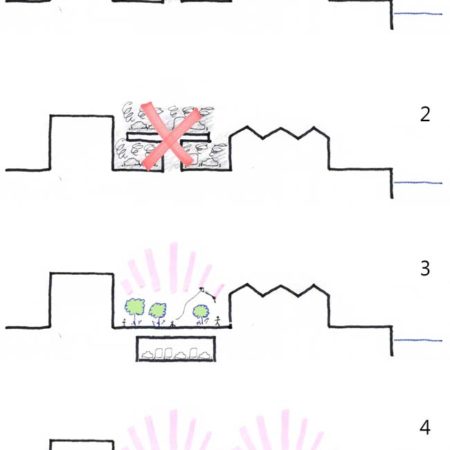 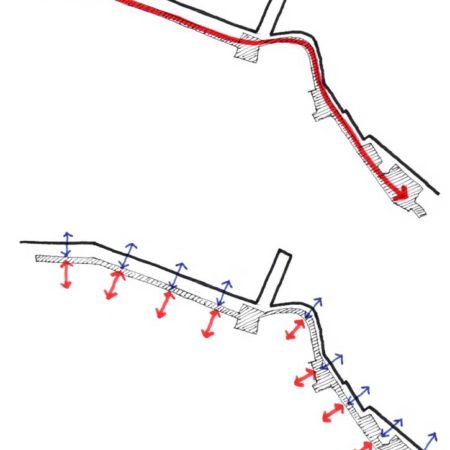 The demolition of the raised viaduct has been one of the main interventions carried out within the site. Built in the 60’s, the viaduct ripped patterns and had a negative impact on the port region, breaking its proximity to the Baia de Guanabara (a bay). Its removal, along the year 2014, gives back forgotten and isolated places to the city of Rio, even sometimes unknown, and returns to the city a large area along the Baia de Guanabara’s waterfront. The project responds to a need of remaking the urban landscape resulting from the demolition of the raised viaduct, generating a group of free spaces acting as a chained system and an alternative net complementary to the existing urban pattern. Simultaneously, this system shapes a long-distance itinerary that will completely change the current physiognomy of the centre of Rio de Janeiro, returning to the citizen the public space taken along the time and revaluating it.

Also, reflecting on social aspects and looking into the recent times, it is apparent that many public spaces in Rio de Janeiro have been resolved by randomly placing trees, benches and bins. It is true that these elements form the natural basis of most public spaces, but they do not guarantee the success of the intervention, often concurring in banality. For this reason, regardless the intense use by the locals of Rio de Janeiro and the direct benefits they obtain from them, the citizens’ sense of pride and appropriation is sometimes low, with negative consequences for the space itself and its users.

That being the case, the outcome of the intervention needed to be of high-quality in terms of design and construction in order to let the citizen reconsider the value of public spaces in the city, so consequently there has been a task of persistent communication with the many agents involved (Council, concessionary, contractor, local communities…) to raise the bar and work together with the conviction of a new model of public space for the city. As a result, despite a pre-stablished understanding of the city and the way it is built, differentiated proposals were agreed -such as zones of different scale and character, areas of specific use rather than general purpose, noble materials such as granite instead of the usual precast tiles, bricks and mixed concrete slabs-, all with intent in its design and construction in order to stablish new standards for the public space in the area and the city.

Therefore, the project generates resting, playing and gathering areas, unveils historic buildings and views and landscapes to the bay, and allows a pacific and organized coexistence of different means of transport (VLT-tram, bicycles, vehicles and alternative transportations) without interfering its diversity of functions and characterizations. It attempts to recover the integration of the built city with the Baia de Guanabara, in addition to giving support to future activities and new functions which will have to emerge in the revitalized centre and the Porto Maravilha region. The proposed interventions create an urban space with capacity to restructure this new port region, rescue memories and promote a new relationship of the city with the Guanabara Bay.

The approximate 250.000 m2 of the Waterfront Promenade are not only a fundamental piece for the renewal and revitalisation of the port area, but also of the centre of the city. Focusing on the pedestrian, the Orla Conde & Olympic Boulevard stablishes a change of paradigm, leaving behind a city that prioritized the car over pedestrians and encourages them to reconsider and re-appropriate their public space.

Role of the entrant in the project: Urban Design project (Consultant)