Building on the award-winning work on the Public Realm of Elizabeth Quay the project created exterior landscape spaces and gardens throughout the first high-rise developments at Elizabeth Quay – The Ritz-Carlton Hotel and The Towers Apartments.

To ensure the development of these two high-rise buildings were in keeping with the predominately pedestrian only public realm, the ground plane elements, particularly the ‘water droplet’ paving pattern and WSUD planters between the buildings were seamlessly integrated with the surroundings and the waterfront experience, while the former heritage jetty was also recognised with its alignment inscribed in the paving.  In order to safely designate the vehicular porte cochere of The Ritz-Carlton Hotel the paving pattern was distinctively different from the rest of the precinct.

As The Ritz-Carlton Hotel would cater for guests from around the world the project offered the opportunity to showcase and be inspired by the wondrous and varied indigenous landscapes of Western Australia – such as the Kimberly region and the landscapes of the SW of Western Australian of which the Swan River, Perth and its surrounds are within.  This later region is known as one of 34 botanical ‘hotspots’ in the world, and the only one in Australia. The patterns and forms of varied Western Australian landscapes have been abstracted and distilled to create graphic interpretations, particularly when viewed from above by those in the apartments and hotel rooms. 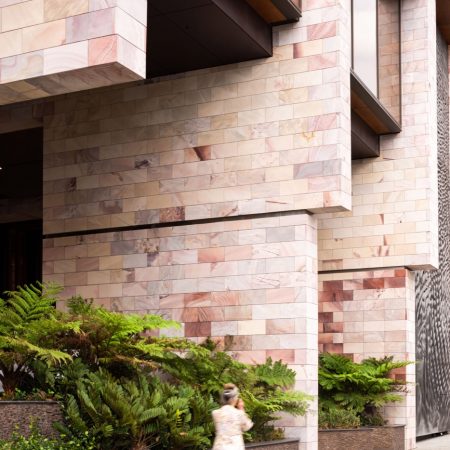 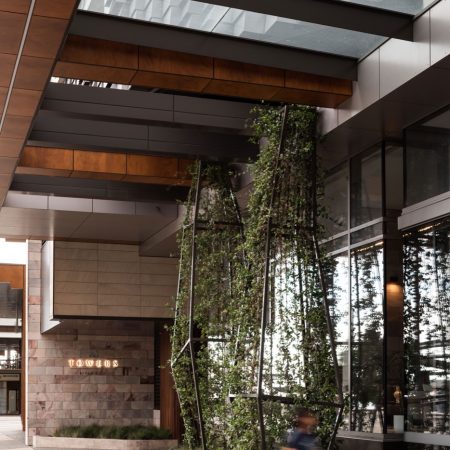 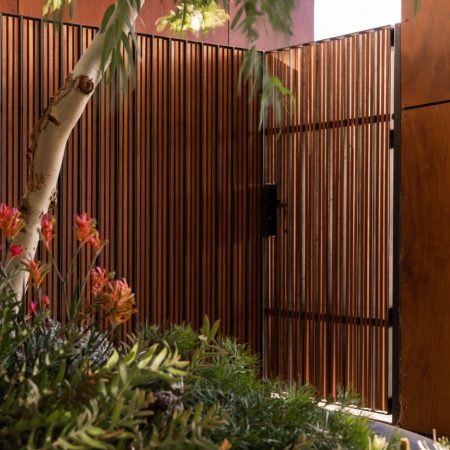 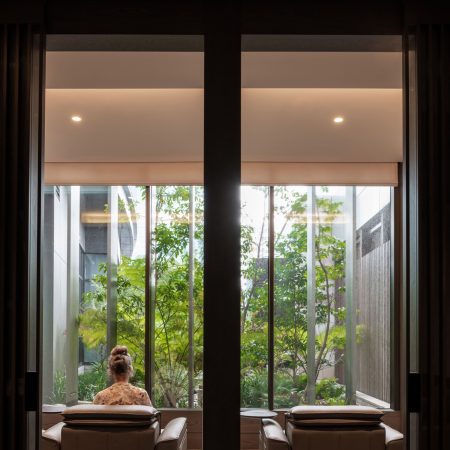 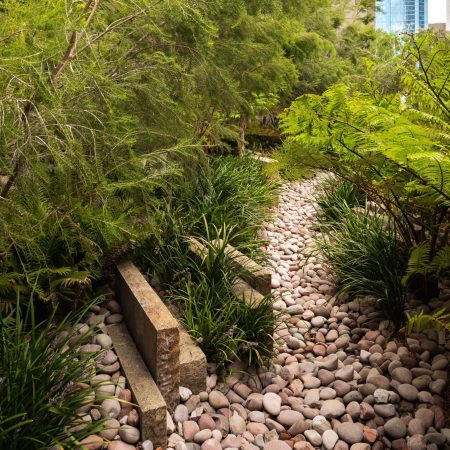 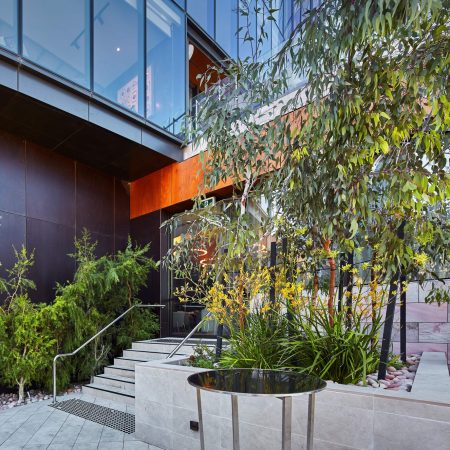 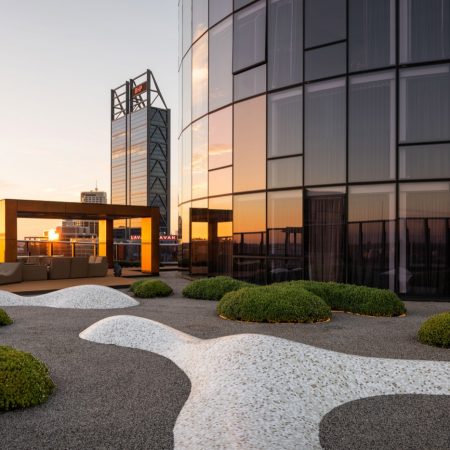 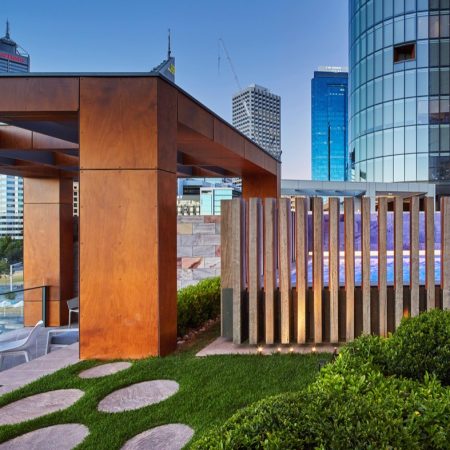 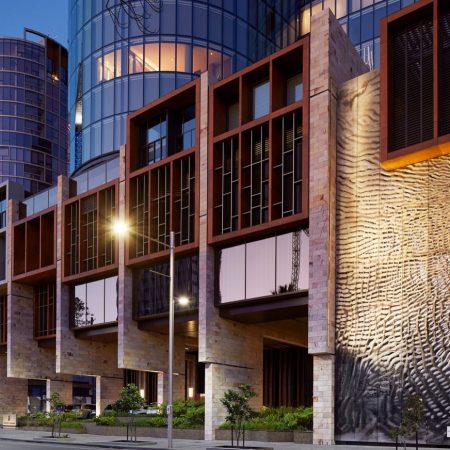 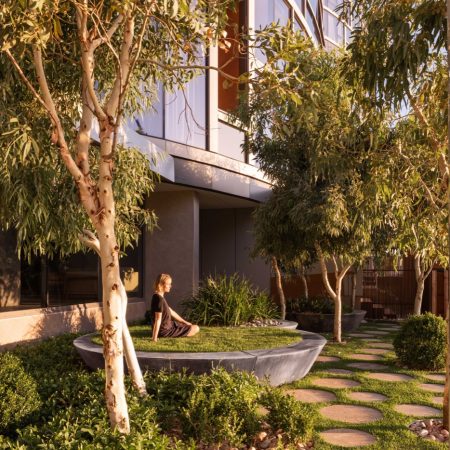 For example, the circular design motifs of The Towers podium level of apartment and recreational area gardens are abstracted ‘hotspots’ filled with the wonderous plants of the south – west of Western Australia.  The design displays these hardy and characteristic plants in a contemporary manner complementing the architectural nature of the building. By contrast the shaded and sheltered hotel entrance planters and the Escarpment Garden on the Podium Level 5, are inspired by the staggered stone forms found in the Kimberly region and also the upper hills areas of outer Perth. Here the plantings of tree ferns, cycads, ferns and fern like foliage create gardens with an ancient Gondwanan feel. While reinforcing the area as a major entrance to the luxury hotel, the gold fleck in the hotel entrance planters give a cheeky nod to Perth as a ‘mining boom city’ -one that embraces glitz and bling.

The site is particularly windy, with even stronger winds experienced on the higher levels. Along with selecting wind tolerant species, large SW river pebbles were selected to ensure this inorganic mulch did not move in high wind conditions.  Sun studies were also generated to ensure a thorough understanding of microclimates created by various aspects of the building.

Areas on podiums that did not have plantings or only stepping-stones and drought tolerant Zoisia lawn, were filled with Styrafoam to reduce cost and load issues, while areas with tree and other plantings included light-weight soils developed by the landscape contractors Deep Green.

The client initially requested a very large living wall on the eastern front façade of The Ritz-Carlton Hotel. Due to the strong hot easterly summer winds combined with the fierce summer sun over many months, TCL cautioned against this and instead encouraged the installation of a public artwork with Cascade by Catherine Woo and UAP elegantly referencing the changing moods of the Swan River in this dry environment.

The external facilities particularly in the apartments encourage a connection to nature – from being within or viewing the constructed gardens, to experiencing expansive views to the river, Kings Park and the hills. In particular, the level 5 podium recreation areas encourage relaxation, rejuvenation and socialisation through the use of BBQ and picnicking areas, pools, decks, terraces, shelters and varied seating areas within the gardens.

The plantings from an extensively WA palette celebrates the wonderous and varied vegetation of the region, while the podium levels have many trees that provide shade and amenity.  Areas with large amounts of shade are planted with a predominately Australian native palette that can cope with lower light levels.

The vast majority of the apartments were sold prior to completion of the construction works, and it can be argued that the extensive external areas and gardens and views to these gardens and the wider landscape encouraged many to buy into the development. The spa and bar areas also have views into gardens, as well as wider river views making for an enhanced hotel experience. The seamless connection to the Elizabeth Quay public realm ensures that people frequenting or staying in the hotel, as well as living in or visiting the apartments are encouraged to explore the wider offerings of Elizabeth Quay. 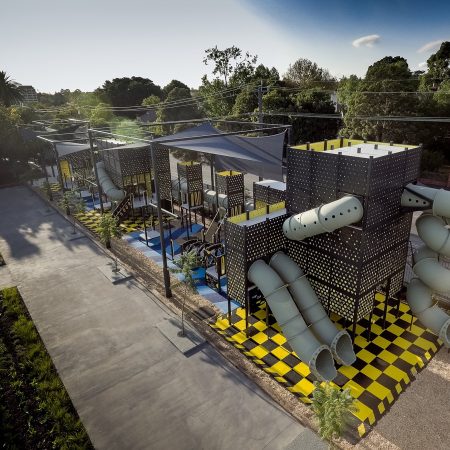 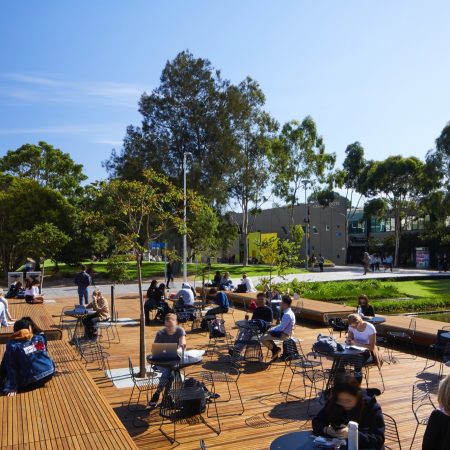 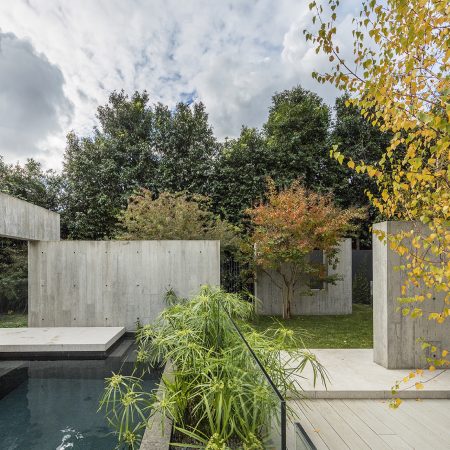 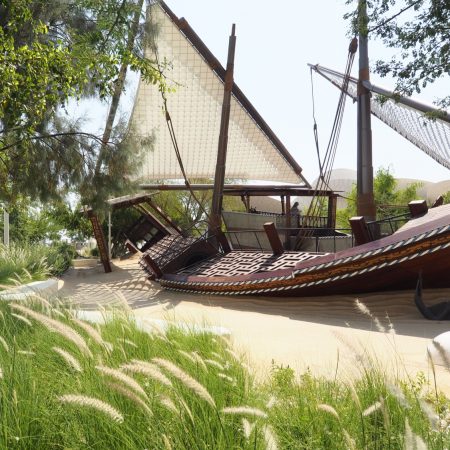 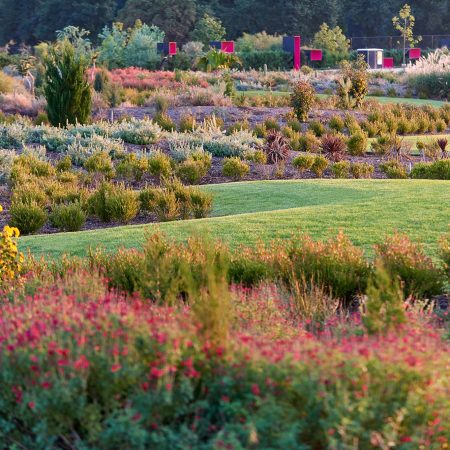 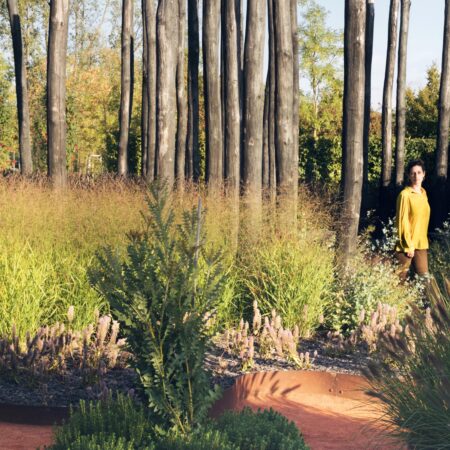