Rainer Schmidt’s long professional and academic career and his handling of complex design challenges have gained him a wide expertise: from grand scale city master plan to innovative park and garden designs. According to him landscape architecture in the 21st century should multidisciplinary reflect the relationship between humans and nature. Before opening his office, Schmidt had studied landscape design in Weihenstephan and later worked for Hansjakob landscape architects in Munich. Honoured with multiple awards, he won the European Garden Award 2014 for Park Killesberg in Stuttgart. 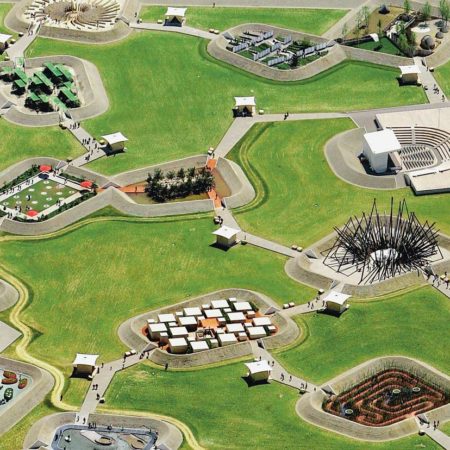 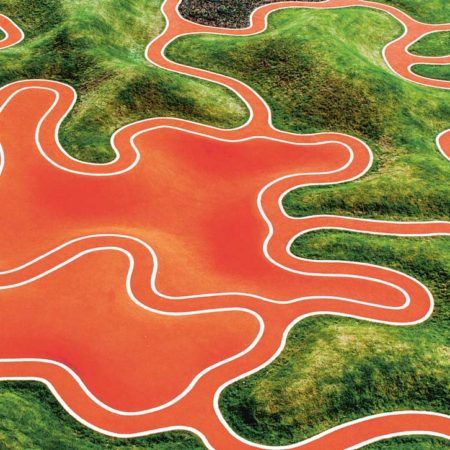 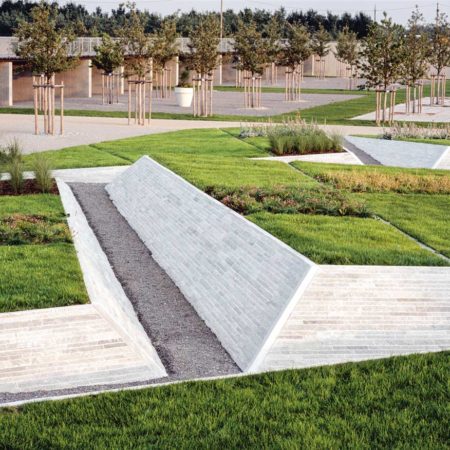 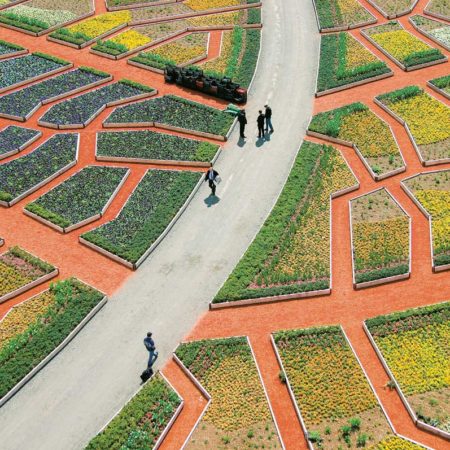 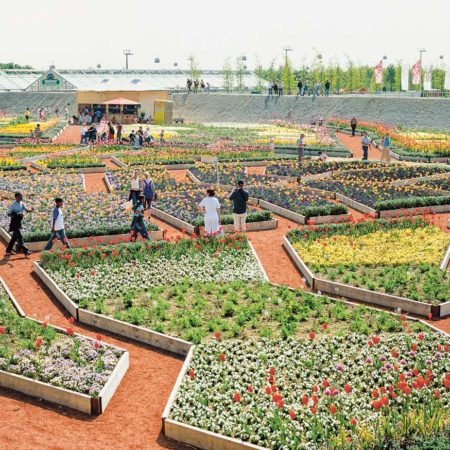 The future construction sites of Messestadt Riem, the new urban quarter and trade fair grounds that emerged from the former premises of Munich-Riem Airport, were the area to be developed for the Federal Garden Exhibiton 2005, commonly referred to as BUGA.
The basic organic structure of every form of plant life is the main theme of the central exhibition areas in this site. The change in perspective, from micro to macro, is the connecting thread throughout the entire area of the garden show. The theme gardens using different cell structures emerged using the motto „Cell Worlds in Changing Perspectives“. In the Gardens of Powers the shapes of plant structures at different microscopic scales serves as inspiration for each new garden.
The epidermal cell structure of a common marsh marigold was used as the concept inspiration for the Garden to the Power of 10-4. A dense network of colourful narrow paths of poured rubber provides access to and through the garden. The winding paths lead the visitor to a large landscape of the same material which forms a mound and a hollow as positive and negative spaces. These elements allow new perspectives of the space and invite play, discovery and relaxation.
The event character of the gardens and the way they were embedded into the landscape set new standards of quality and format of BUGAs to come. The overall concept is a critical and creative commentary on horticultural shows in general. It is a distinct artistic dissociation from the fair, compartmentalised planting bed as a common and indeed almost archetypal constituent of such shows, proposing its own kind of “educational” aesthetics in the allocation of surfaces, in spatialisation, in the creation of atmosphere and meaning for a novel way of experiencing nature. 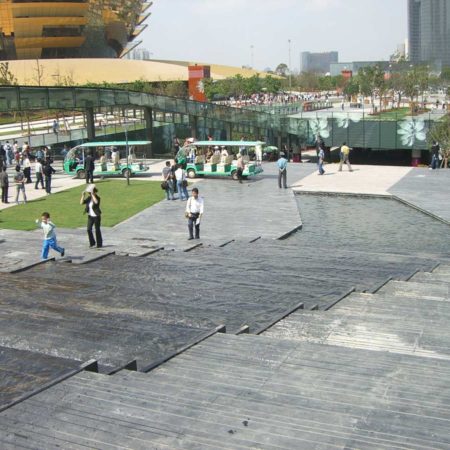 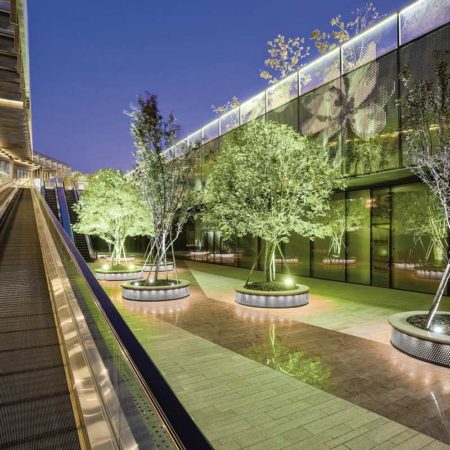 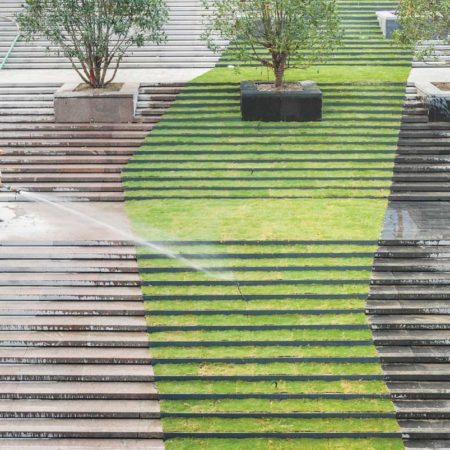 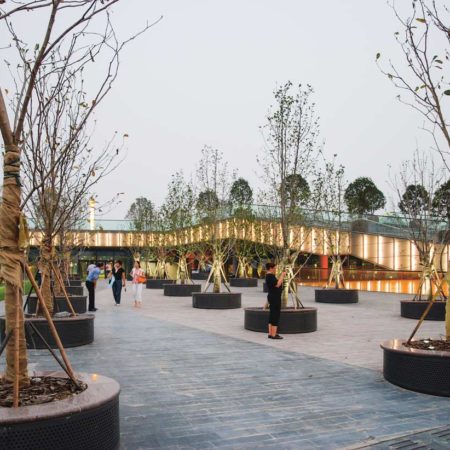 Culture Wave City in Hangzhou, China, is part of the urban development area New Central Business District (NCBD) situated between the historic city and Qiantang River. While the area had been allocated to agricultural use, it is now earmarked for upmarket offices, shops and apartments, as well as public culture buildings. An urban axis with an underground shopping mall and overground cultural buildings becomes a park landscape. Building areas and open spaces form a topography of their own with different heights and depths, ascents and descents, with the functions and designs of the overground urban space and the basements being artfully intertwined. The topography’s undulation makes reference to the rolling hills surrounding Hangzhou and mirrors the waves of the river.

Following the example of Manhattan with its Central Park, the plan provides for the planned NCBD high-rises to be strung on a line along the park axis, so that each of the buildings has a park address. A patchwork of green and water spaces recalls the compartmentalised structure of fishponds and paddies formerly endemic to this area. Ponds and the expansive zigzag-shaped design of the surfaces symbolise the tributary streams running from the mountains to the Qiantang. However, the design also embraces the principles of feng shui, which frowns upon straight lines with regard to the natural flow of energy. As the tidal range of the East China Sea influences the Qiantang’s water level, the riverfront promenades appear in two different levels, depending on the tides. A city balcony covering the existing riverside road and reaching 75 metres into the river crowns the “Culture Wave”. With reference to the rainbow that is caused by the refracting water spray during the spring tides, the Gardens of the Rainbow were laid out along the riverbank. The colours of the plants in the curved beds were chosen in accordance with the gradient colours of the rainbow. 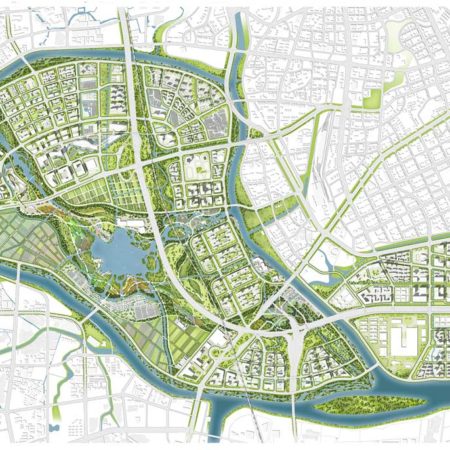 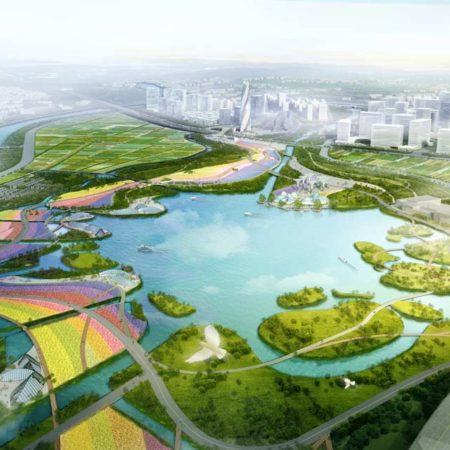 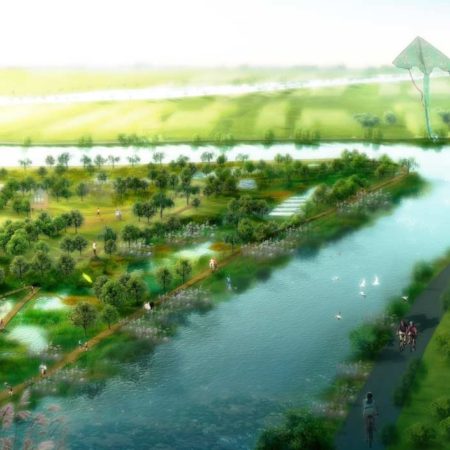 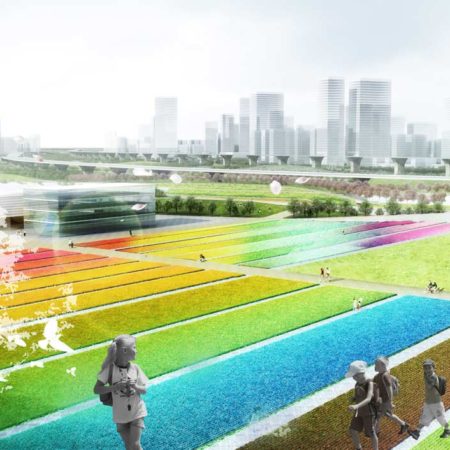 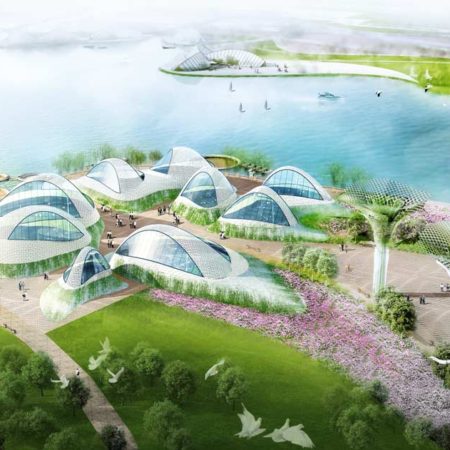 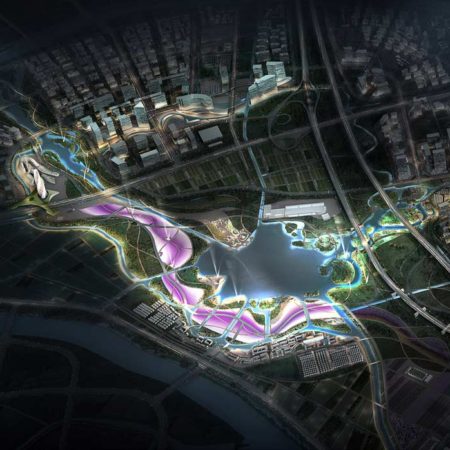 Huadi has cultivated flowers for 1700 years, as well as flowers used for Buddhist and royal ceremonies. The plan of the Guangzhou government is to integrate the Huadi flower cultivation and agriculture resources into the new high standard Huadi ecological area. This area will be a distinctive new marker for Guangzhou and a model of New Urbanization. Specifically, the primary goal is to build this “flower city, green city, and water city” as an Eco-city. Key themes highlighted by the Government for investigation include the flower theme, improvement of the water network system, and developing a local identity for the Lingnan water village. The overall site concept is derived from the form and character of the dominant elements of flowers and water. The structure comprises one central area and seven urban groups radiating out like the petals of a flower. The site’s green space network links the Foshan ecological corridor, Pearl River ecological corridor and the Pearl River Delta into one connected system. Rivers and streams around the core area flow into and through a new water system designed to clean and filter river water. The centerpiece of the water system is the Huadi Lake and wetlands in the core area. Cleaned water from the system can be used for recreation, within the urban area and the core area, and for irrigation of flower fields. 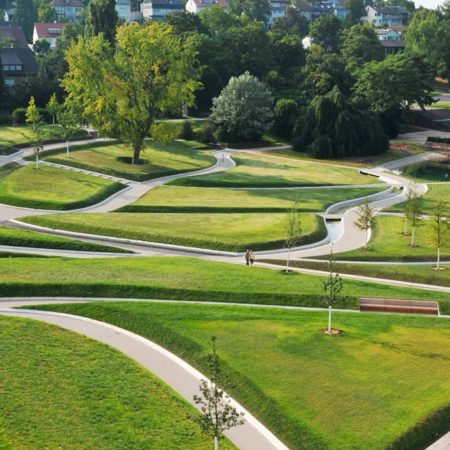 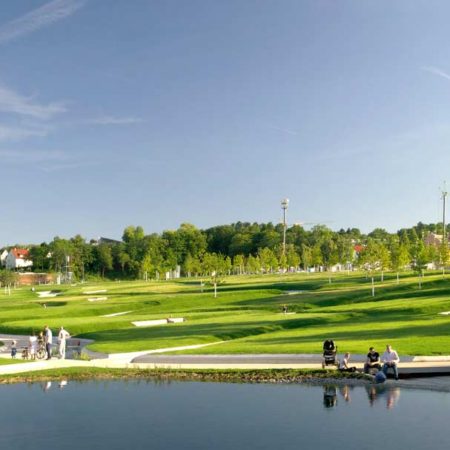 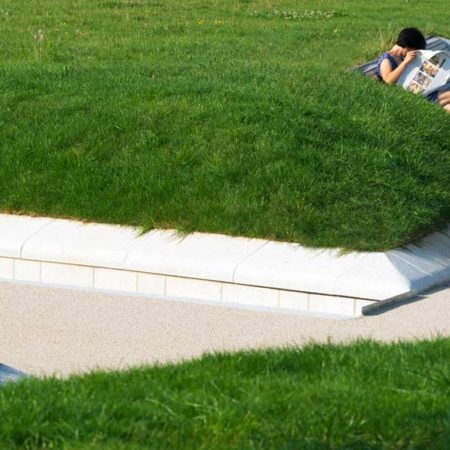 Two themes that characterise Killesberg are the starting point for the design: a soft, near-natural landscape, and man-made quarries as hard topographies. The hard forms of a typical quarry topography change over time, morphing from sharply broken materials into a softer landscape of green regrowth. This process of change has been interpreted at Park Killesberg by bringing vast quantities of soil into the former quarry areas and exhibition grounds, simulating the long natural process of smoothing out irregularities by creating a new topography of lawn ‘cushions’ between path systems. A new landscape arises, and it tells a story. The underlying theme of the design is based on skewing the perception of human scale and reinterpreting familiar perspectives by raising the topography to eye height and setting up a sunken path network between.. The skilful illusion of the new topography intensifies the feeling of being completely absorbed in the landscape and generates a surprisingly playful experience for the park user – a new sensation. The layout of paths is inspired by the quarries’ irregularities, as well as by the gentle winding pattern taken as one climbs the ascent on either side of the street which bisects the park. The new design motif unifies the Feuerbach Heide and the park in front of the Rote Wand (red wall of Kochenhof) with the new park extension (Grüne Fuge). The concept of sustainable and ecological development is an underlying theme. Rain water from the roofs of the new development is collected in an underground cistern from where it is piped to a new lake and returned to the water cycle. With their individual microclimatic conditions, the park’s meadow cushions are biotopes for various types of flora and fauna. 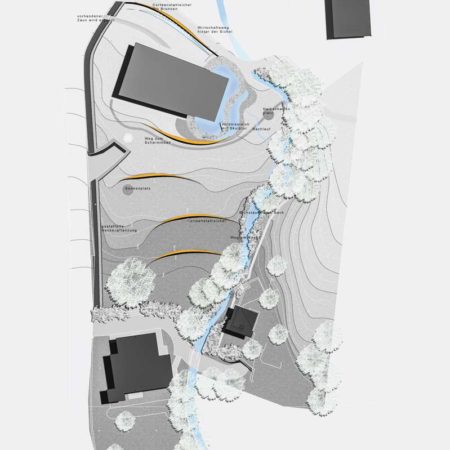 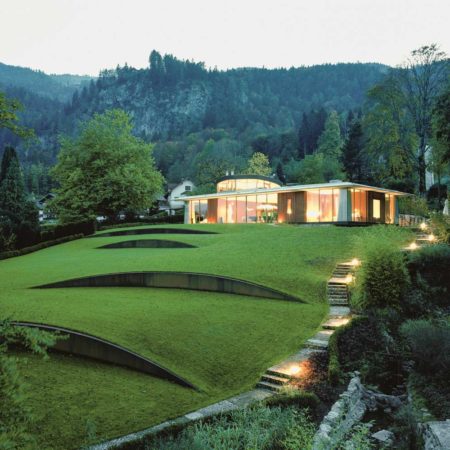 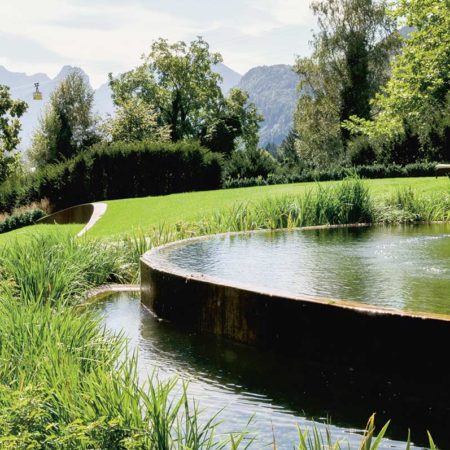 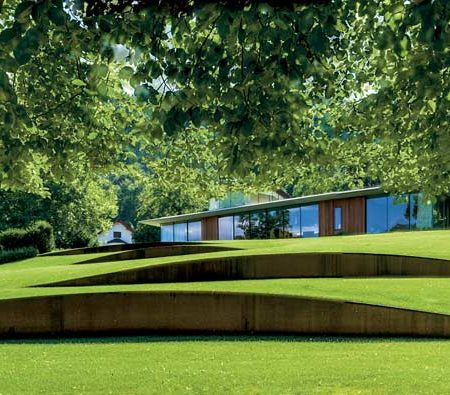 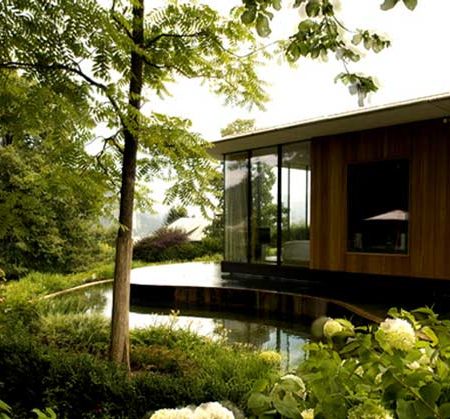 The hilly landscape of this site in St. Gilgen am Wolfgangsee stretches between new and old residential buildings. The serenity of the large grassed area brings the enormous scale of the nearby Alps to the site and imparts some of their generous scale to the garden landscape. The garden is bordered by a wild creek landscape, offering another contrast to the smooth green carpet of the remodelled garden expanses. Sickle-shaped steel blade walls slice into the green grass. These walls will continue to weather over time and offer various feelings dependent on the weather conditions: during rain the walls appear almost black, in sunshine they appear bright red, and in winter they offer a strong contrast to the surrounding snowbanks. The entry to the villa is designed as a riotous mass of colour, which is also carried through to other detailed parts of the site such as the pond landscape. The strength of the garden lies in its contrast between manicured grass areas and smaller scale shrub and garden areas. Seating areas are located throughout the garden to maximise comfort in various times of the year.