Playground “Salute” was opened in August 2018 to celebrate the 90th anniversary of Gorky Park, the largest and the most significant park in the center of Moscow. The project was initiated by the park itself and Garage Museum of Contemporary Art aiming to raise the quality of playspaces in Russia through creating a unique natural landscape. 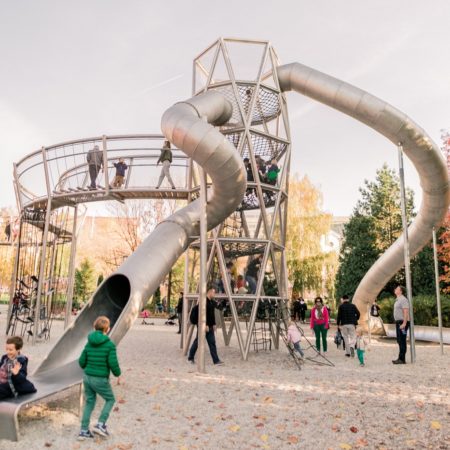 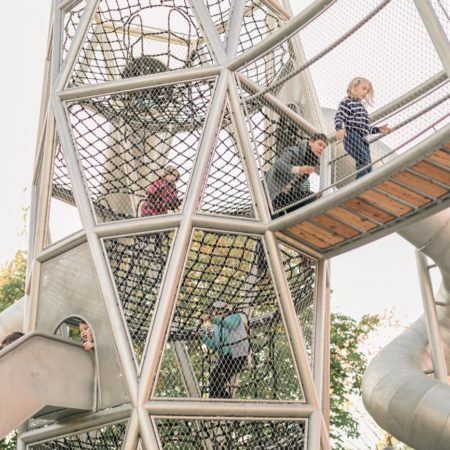 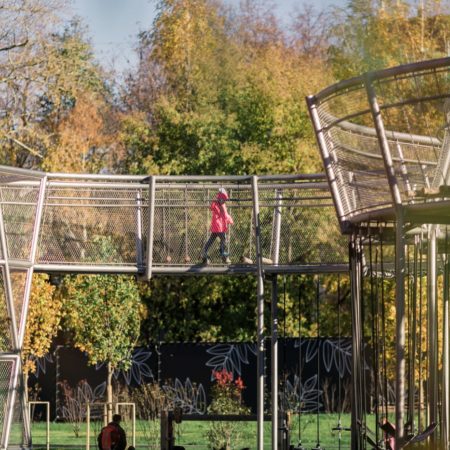 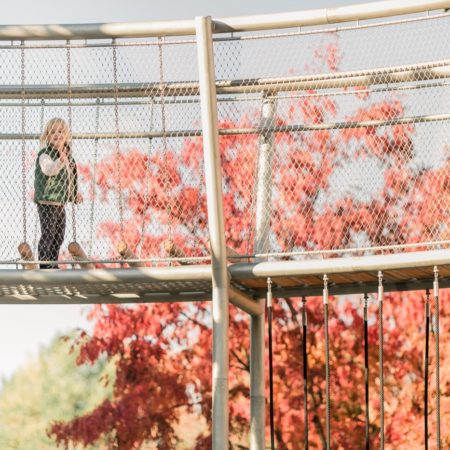 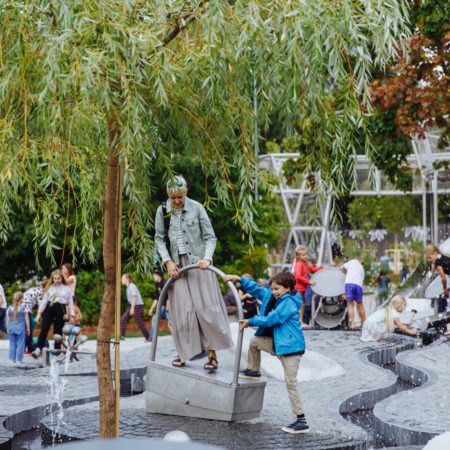 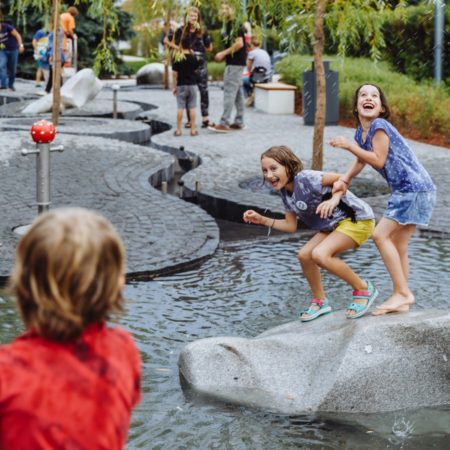 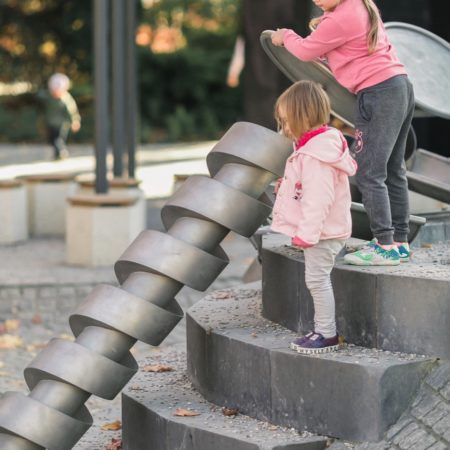 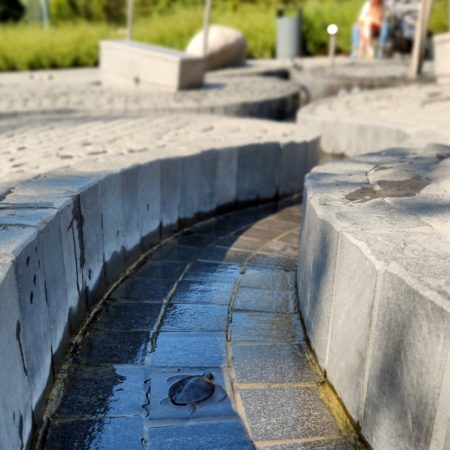 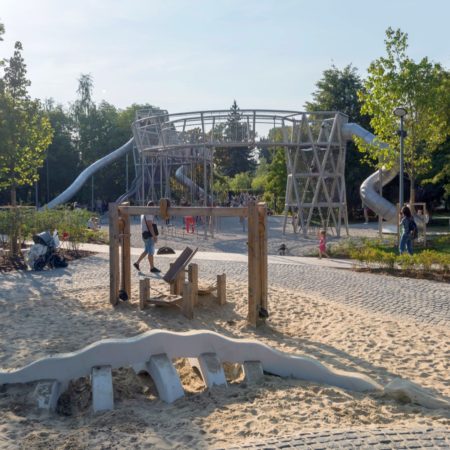 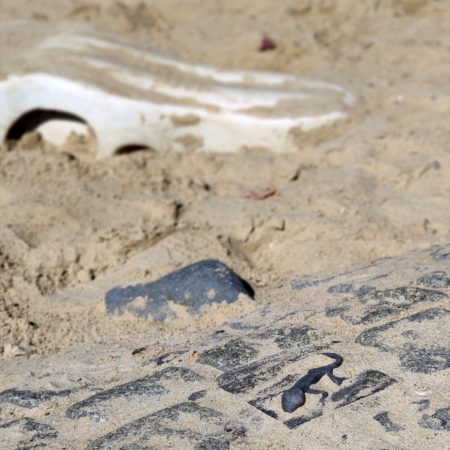 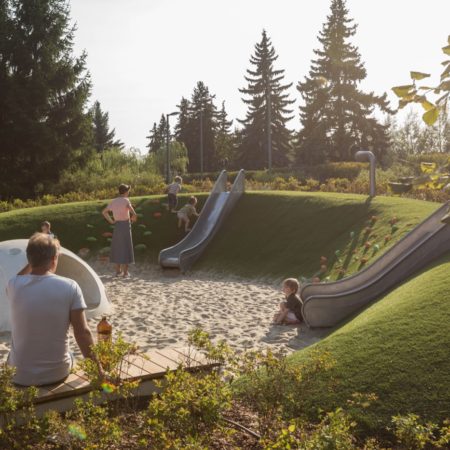 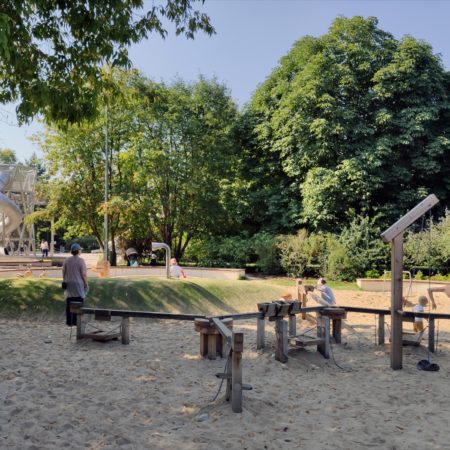 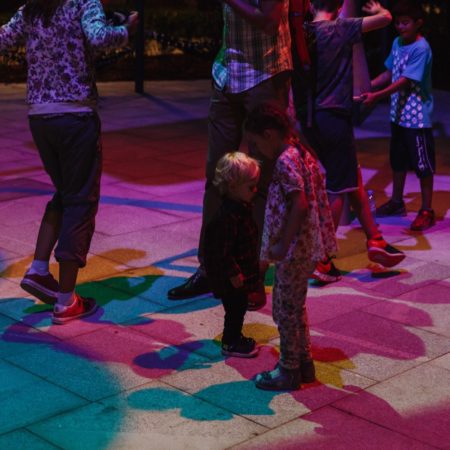 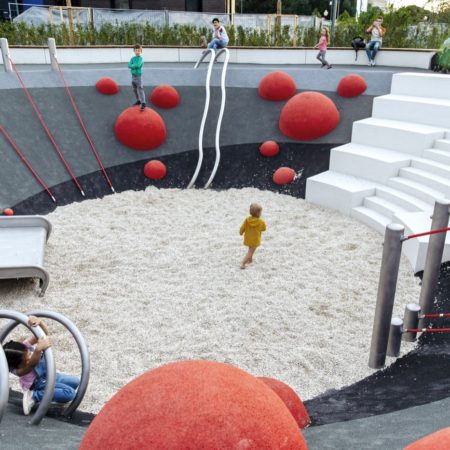 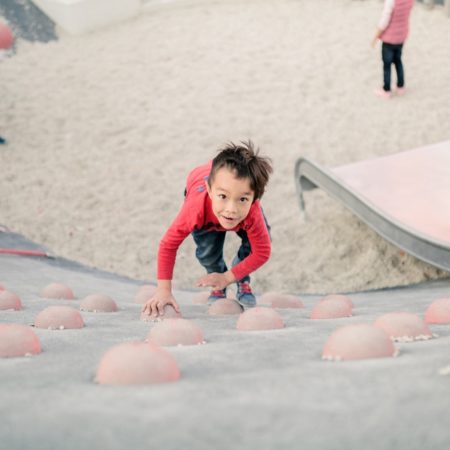 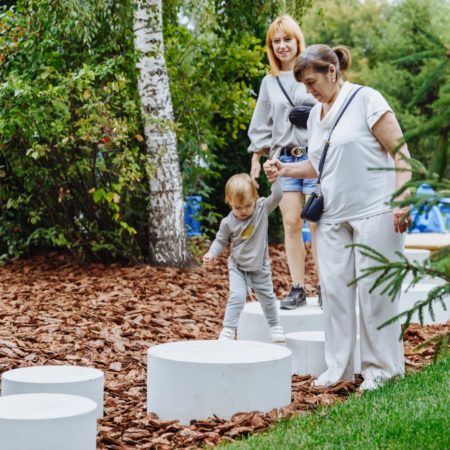 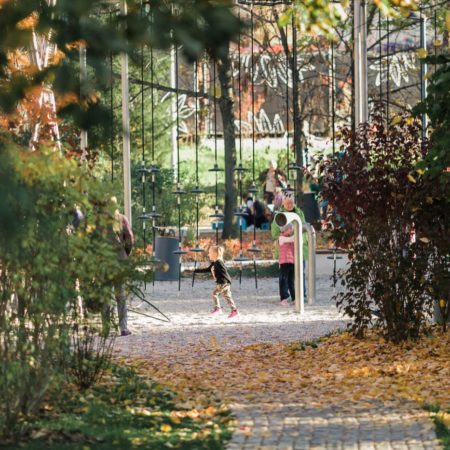 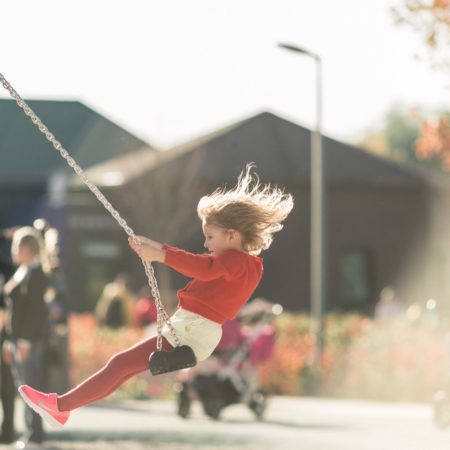 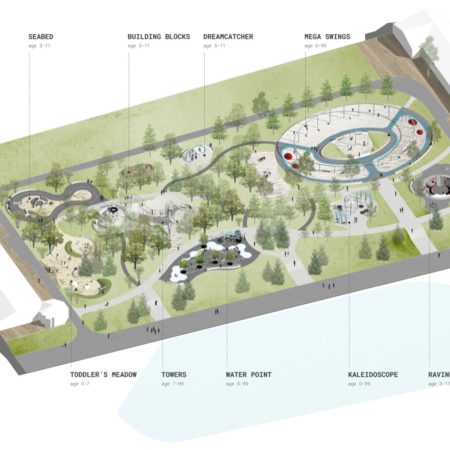 Throughout history the area of today’s playground was related to leisure activities and children: in 1930s there was a community center with nursery and later — an amusement park. In 2012 Garage Museum of Contemporary Art built temporary pavilion designed by Japanese architect Shigeru Ban. After the main museum building was opened, Gorky Park together with Garage decided to establish a large playground for all. It is located close to the pond, children’s club and educational center. Apart from the historical layers, there were numerous restrictions, which affected the overall architectural decisions and construction works. Due to the site’s cultural and historical value and the location within the subway protection zone, the excavations proceeded in the presence of archaeologists.

The name “Salute” is a wordplay. It is not only a greeting. Literally translated it means “fireworks”, which came as an idea of huge variety of play opportunities — an explosion of emotions one can experience on the playground. Based on the main needs of each age group, the design allows for various scenarios for all from 0 to 99 years old. Each play zone offers physical, tactile, visual and sonic experiences encouraging children to explore and develop. The oval shape of MEGA-SWINGS refers to the Ferris wheel, one of the symbols of Gorky Park in the Soviet era and to the ellipse of the temporary pavilion by Shigeru Ban. The inclined structure consists of 29 different swings from 2.5 to 5.5 m high. At night the interactive lights go on turning the playground a romantic spot.

TOWERS resemble the hyperboloid television tower designed by engineer Shukhov. It is visible from the upper platforms. At the same time, they resemble a roller coaster, the most memorable sign of Gorky Park in the 90th. The idea was to reflect on the changes the place had gone through: from the passive pastime in amusement park to a public space, where the visitor can become a participant involved in a number of things happening. Once on top of the towers, one can follow the winding path between the two towers, full of adventure and challenge.

WATER POINT, visually connected to the pond, allows for a variety of interactions: canals with dams, pumps, sprayers and Archimedes screw. Another place to experiment with water is SEABED, the most remote part for those ready to play in dirt, build sand castles and dig up a giant dinosaur skeleton. While the water point is designed for play with clean water, the seabed offers sensory play with mud.

TODDLER’S MEADOW is designed for the youngest visitors: the hills to develop physical abilities, small elements and the range of materials and textures to develop fine motor skills. Thematic equipment allows for role play, while more abstract equipment and loose parts encourage free play with sand and simple mechanisms.

KALEIDOSCOPE is the calmest place, based on experiments with light, color and sound. One can always hear a peaceful melody of the Dance Chimes and children’s laughter. The RGB lighting helps to learn about physics of color in a playful way.
RAVINE, 2 m deep space with various inclinations gives plenty of opportunities for vertical climbing.

Playground “Salute” consists of several layers. TOWERS and MEGA-SWINGS attract visitors, excite and amuse. After the first experience with larger structures the play continues on the next layer: calm spaces for experimental games. On the third layer the most attentive and focused ones can find small secret details in the paving, complex water canal systems not so evident at the first glance. Such “layer-by-layer” approach enables the playground to invite people again and again, so that no one ever gets bored.

All the spaces have curved profiles to preserve the existing plants. The main principle was visual organization of the unstructured greenery and creating buffer zones in between play spaces. The picturesque lawns, bushes and groves make visitors feel like in nature rather than on a playground.

Aiming to provide clear and friendly navigation it is designed as a comic book. Each zone has a board containing the age mark, often 0 – 99. It helps to identify the playground as a public space for all. The hashtags #площадкасалют and #SalyutPlayground allow to follow it in social media and explore new possibilities of the space that opens up to the visitors every day. 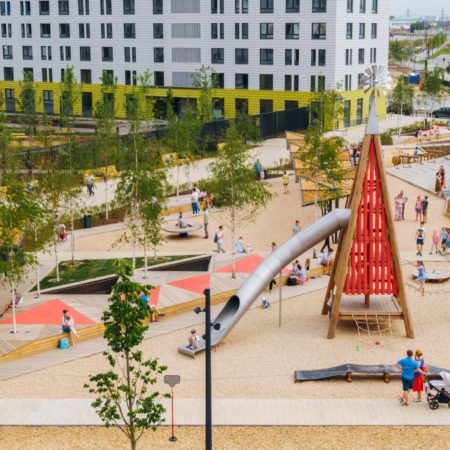