The project was designed for a trapezoidal parterre constrained in the middle of a solid concrete pavement. The courtyard is placed inside of a building block in the city center. The owner is a religious order “HH de la Caridad”. School, residence, salons and offices looks to this backyard. It can be accessible from all the spaces that surround it. Zaragoza has an extreme climate. The requirements for this project to succeed are enough shadows in summer and sunlight during winter. The wind in this time of the year is very cold. 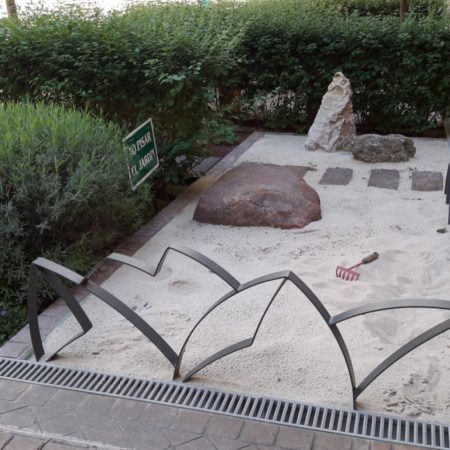 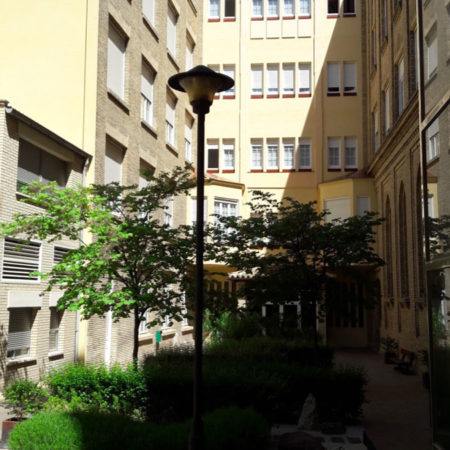 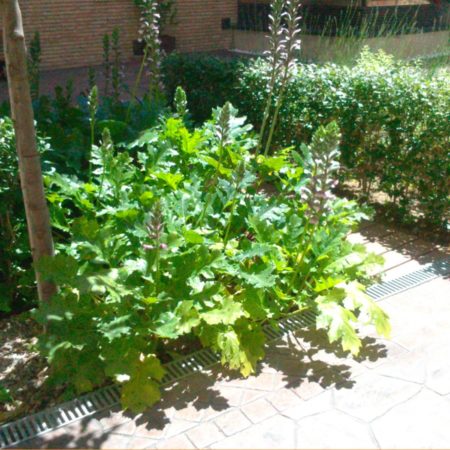 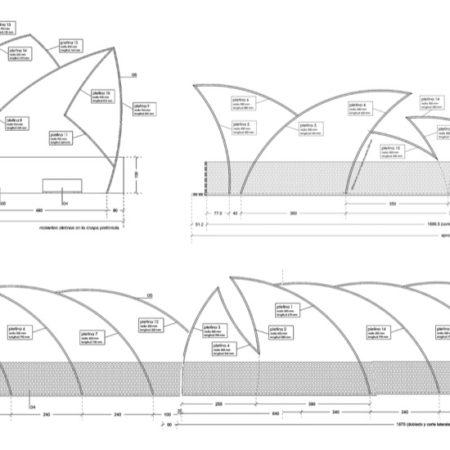 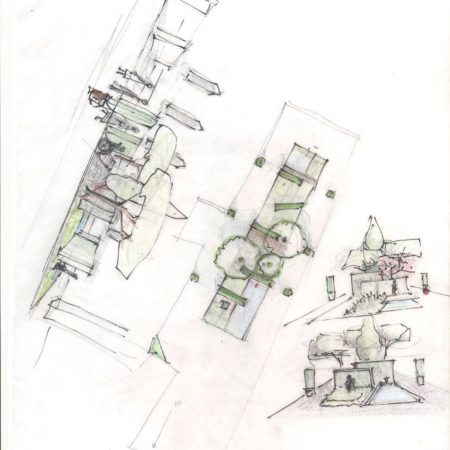 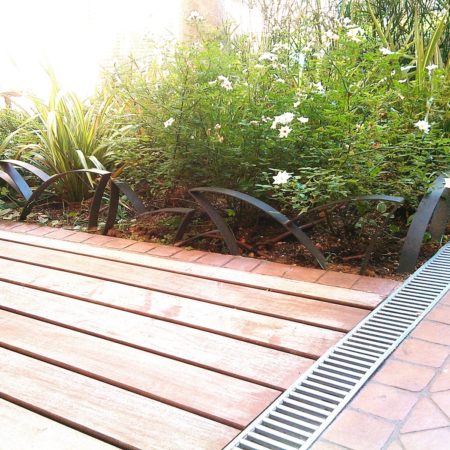 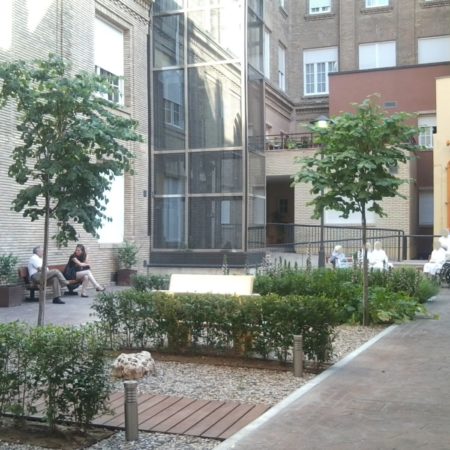 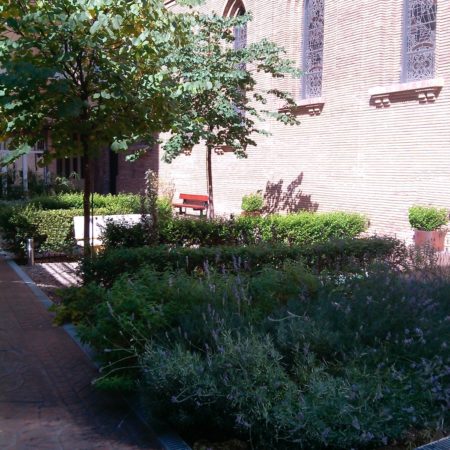 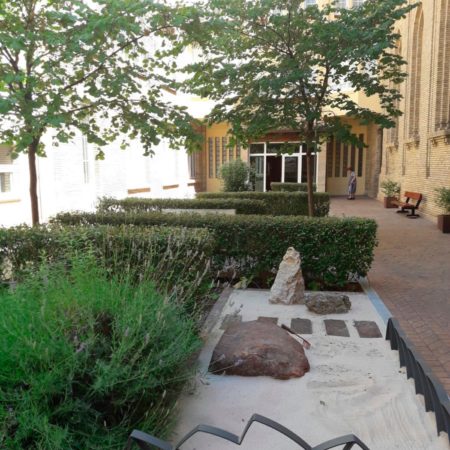 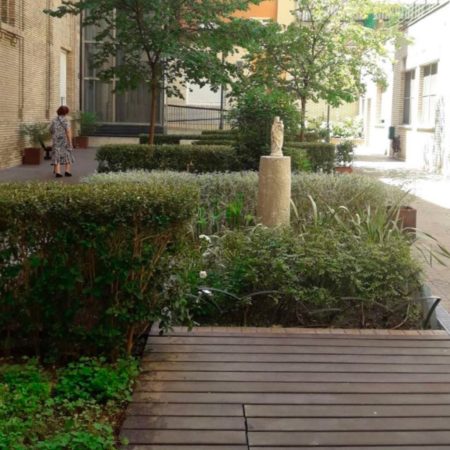 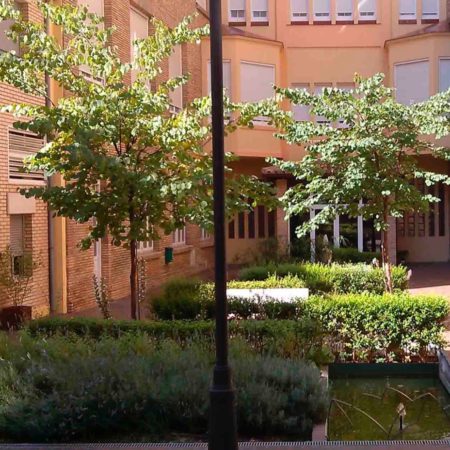 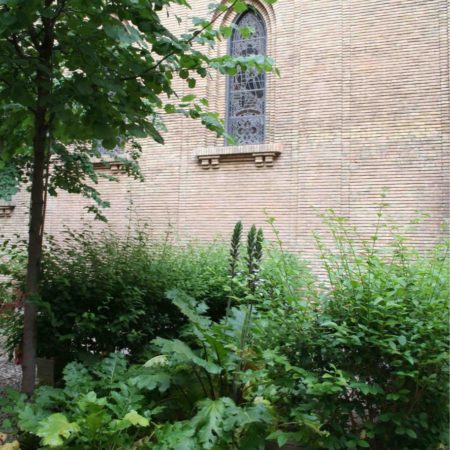 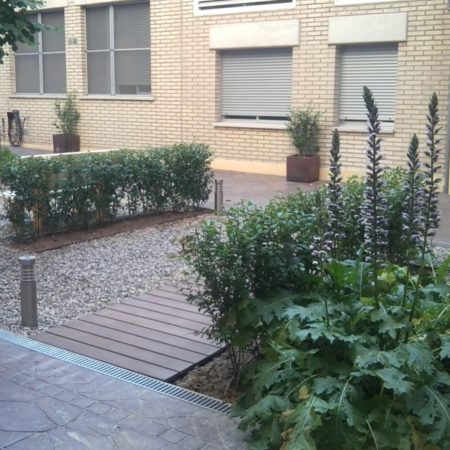 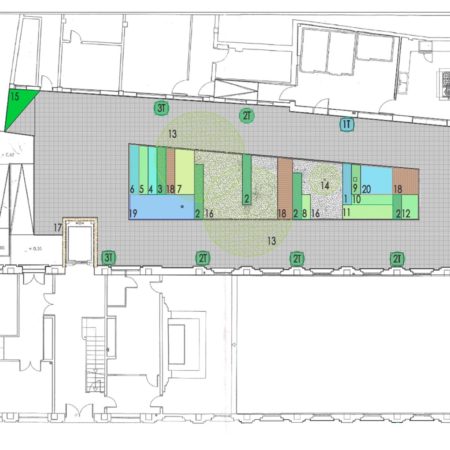 The rigid geometry of the parterre suggests designing the garden out of its own boundaries. Hedges are projected in parallel alternating its position from one side to the other of the backyard. These hedges are reflected and aligned with bushes of the same species that are planted into a decorative cubic planter. In order to break the rigid geometry and evade the central space, the planters are located in the exterior part of the backyard. The first designing approach tried to create a shorter impression in the longitudinal direction of the backyard by shaping the bushes in different heights but later they become equally high to make easier the maintenance.

The goals are the shadow and the transversal movement inside of a cloister concept and a labyrinth simulation. The parterre is unsealed to the transversal passage, by gravel or boards paths. Water. One pond had the water at rest and the other one in motion. Banisters and bordures come from the need of protecting wheelchairs users from the possible fall into the water. Ponds were modified in a posterior phase due to the lack of maintenance. One of them was replaced by a rose´s parterre and the other one with a little Japanese dry garden. The entrances views, in the longitudinal axis (one of them from above) emphasize the shrubs movement towards the sides. The transversal view from windows has another character in perspective and with the historical wall of the chapel at the bottom.

Species selection and seasonal variation: Cercis siliquastrum has a big seasonal variation with interesting full bloom in spring, and shadow in summer. All species flourish and can be pruned, this is very appreciate by nuns. Some of parterres have aromatic flowers and others have Acanthus mollis, typical species of medieval monasteries in the area. The ground was covered with gravel, due to the disappearance of Acabthus during the winter. The corner with Zantedeschia aethiopica was kept, upholding nun´s traditions, and added a groundcover, Hedera helix.

The Ligustrum lucidum hedges have an echo in the external planters. There is a different hedge below the sculpture, Teucrium fruticans smooths the atmosphere around it, and Laurus nobilis is behind and frames it with a dark background. This project gives consideration to the concept of a cloister in a place occupied by a religious congregation. It combines the idea of cloister like a quietness and meditation place with the idea of the new concept of a religious order, open to the world. It provides shade during summer and has its movement around the courtyard, it qualify the concept. It remains for similar uses, with a modern approach of wide and transversal movement, using a typical monastery style with topiaries hedges, with a dynamic and centrigufal character in addition with concentrated and meditative.