Built along the shores of downtown Austin’s lakefront, the Seaholm Power Plant is an iconic Art Deco structure that was the sole power source from 1950 to 1959, at which point additional power plants began to come on line. Seaholm continued to generate power until 1989, remaining active as a training facility until its final decommissioning in 1996. The facility sat dormant downtown for years afterward — largely serving as a monolithic barrier between Austin’s central business district and the western reach of parks and open space — until the Austin City Council requested proposals from development partners in 2004 to initiate a large-scale adaptive reuse effort. 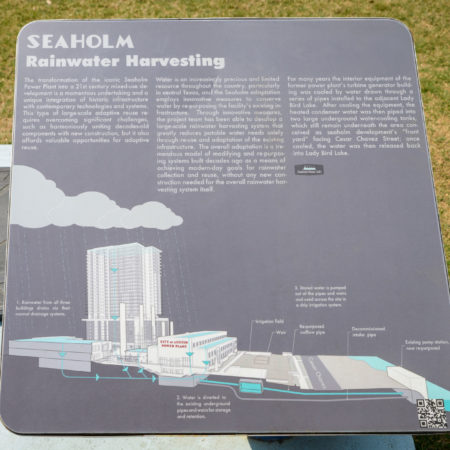 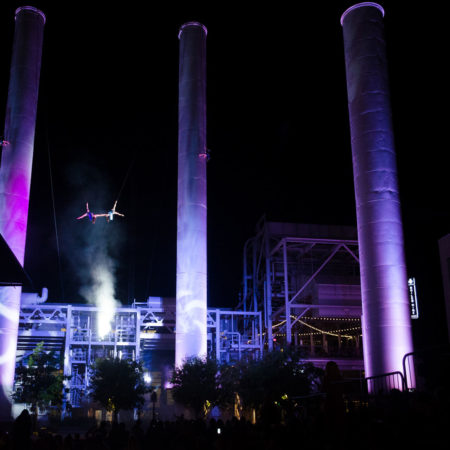 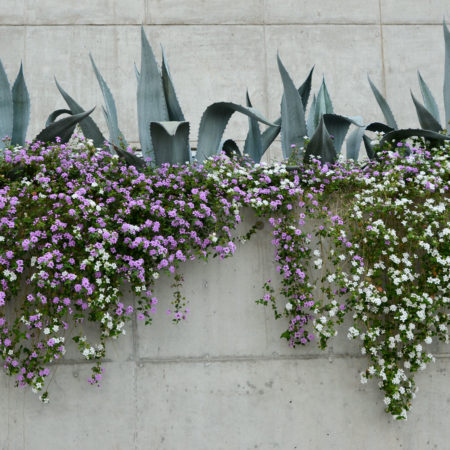 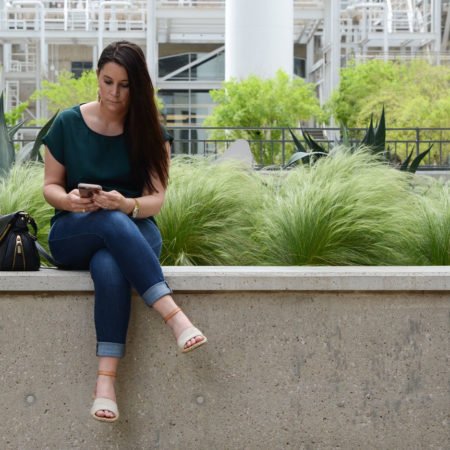 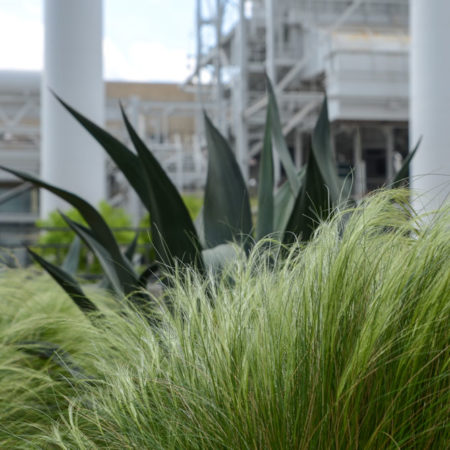 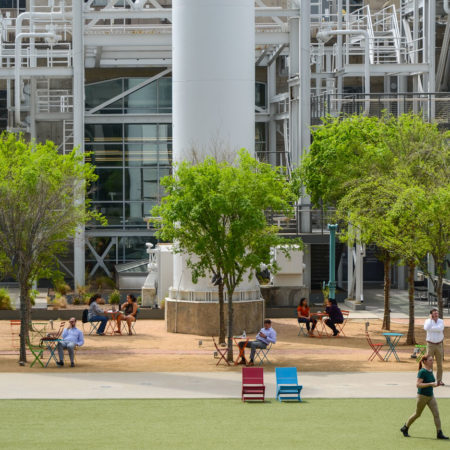 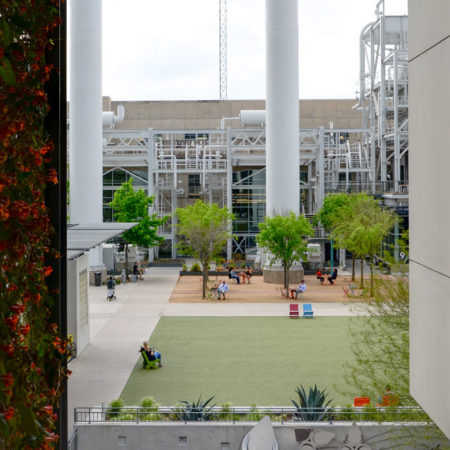 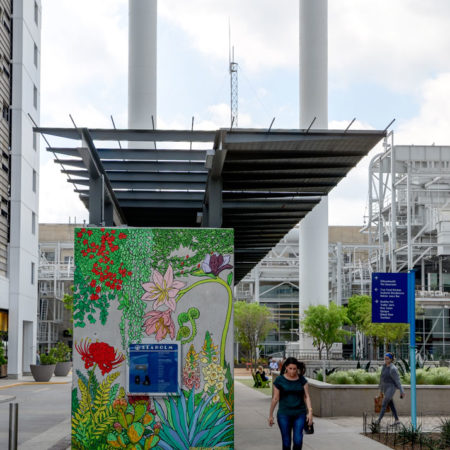 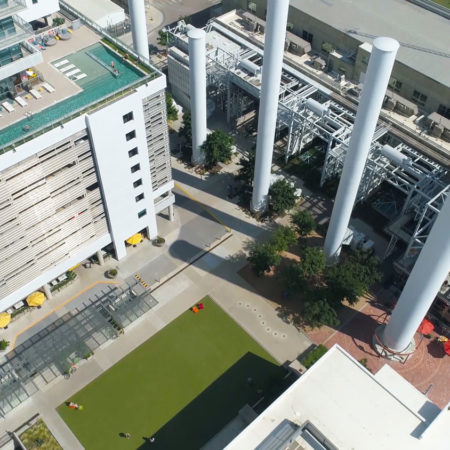 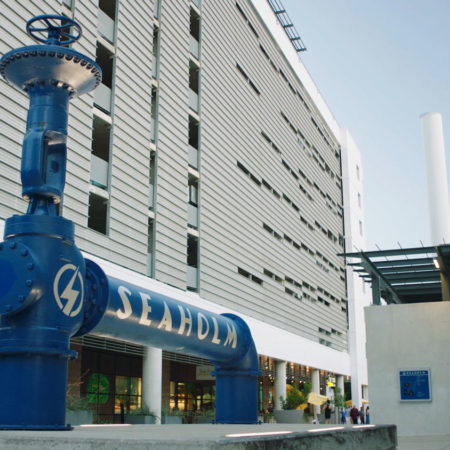 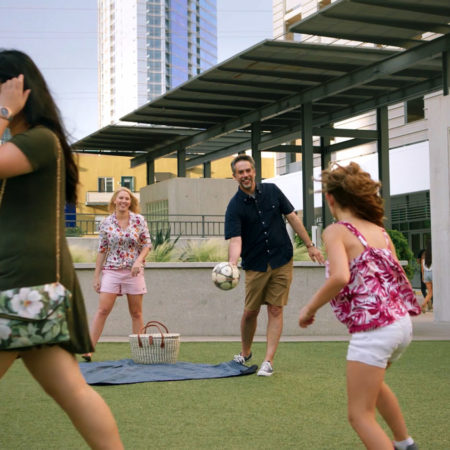 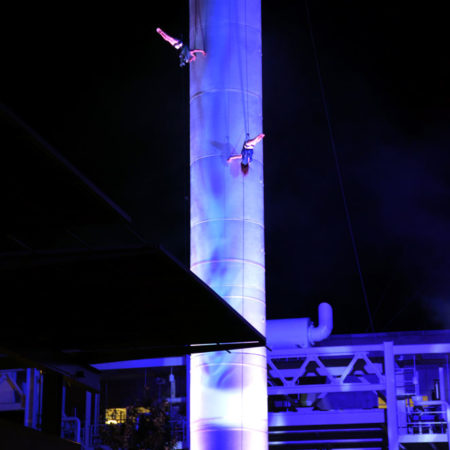 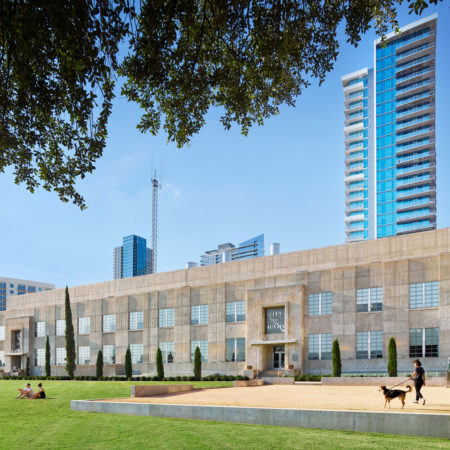 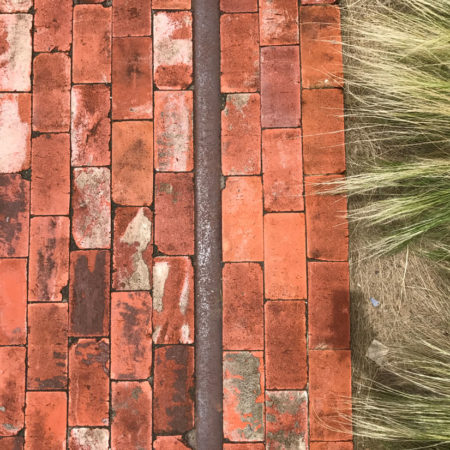 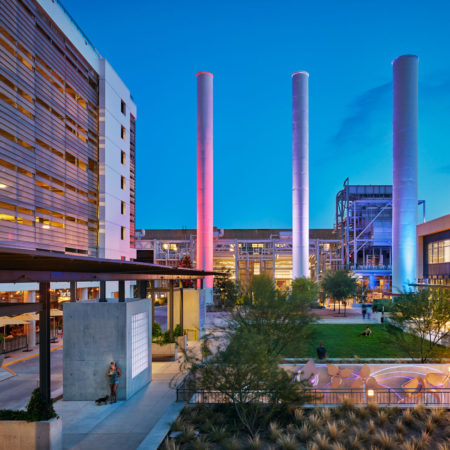 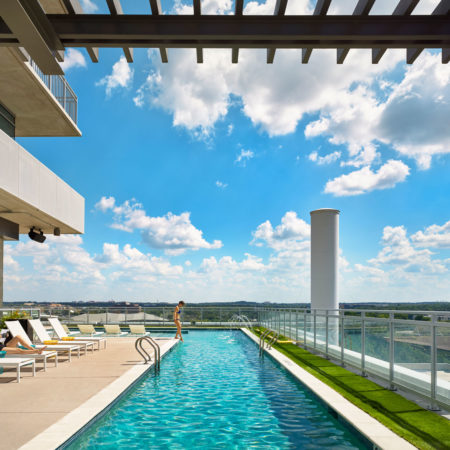 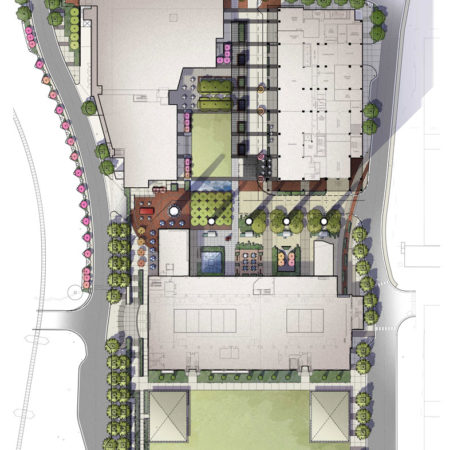 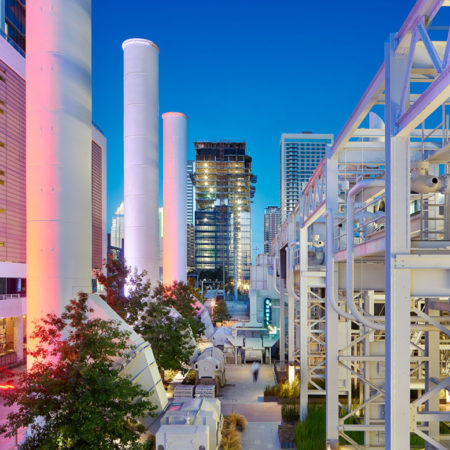 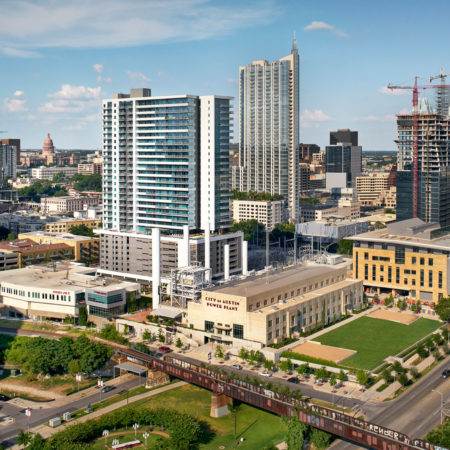 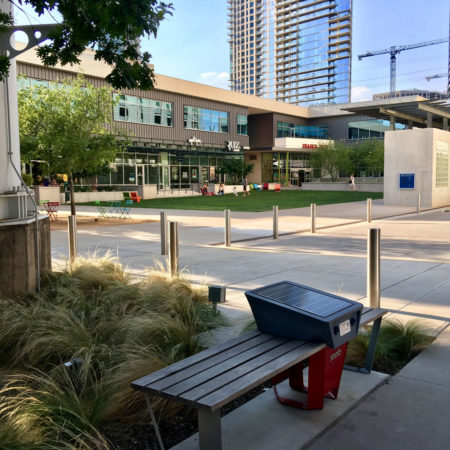 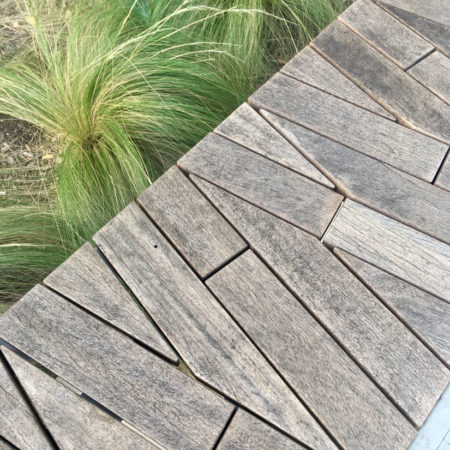 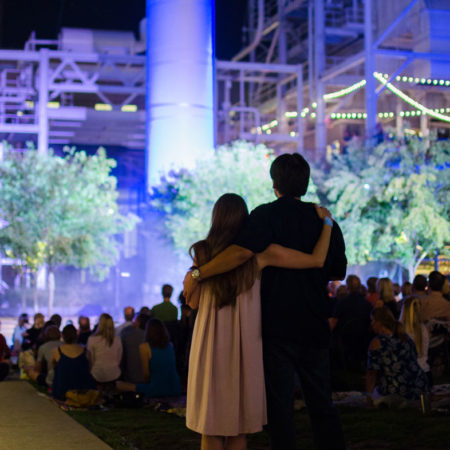 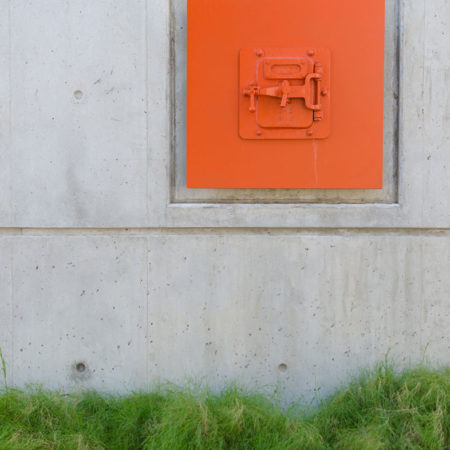 The effort encompassed transforming a reclaimed brownfield site — with unfavorable soil, grade changes and other demanding challenges — through infill development while accommodating a facility on the National Register of Historic Places into a new set of uses. Because the power plant couldn’t be opened internally as a civic-focused venue, the approach of retaining and celebrating the historical character, particularly in the new civic-focused exterior realm, allows patrons to engage with the past life of the facility. It was built as a large-scale factory, not intended or designed for public use, so all decisions had to emphasize establishing a civic place for community interactions. The design intent was minimalist and contextual — celebrating its past and integrating historically inspired artifacts with nodes of interest and contemporary items (like recharging posts for cars).  Prior to redevelopment the 7.8-acre power plant was largely a connectivity barrier. The redevelopment opened up the site and established a multimodal transit hub: walking paths connected it to downtown on one side and the popular Pfluger Pedestrian and Bicycle Bridge on the other; the Lance Armstrong Bikeway connects cyclists across town; planning for future transit accommodates a potential station for the proposed Lone Star Rail, which would connect Austin and San Antonio. In terms of urban planning, we fought for the importance of the street-level design, which resulted in realigning streets and greater emphasis on a pedestrian-oriented streetscape design.

The outdoors serve as a multifaceted public realm capable of accommodating a variety of uses. One of the most prominent is a large green south of the historic building adjacent to Cesar Chavez Street that was envisioned as an adaptable, multipurpose front yard for downtown Austin; the space is used to host fundraisers, film screenings, etc., and its sloped lawn can accommodate over 1,500 patrons. The lawn is complemented by a more intimate courtyard, used for yoga and passive gathering throughout the day, as well as more independent, comfortable and contemplative spaces such as informal seating underneath a tree grove next to a fountain with misters that allude to the steam that once powered the plant’s generators.

In terms of community impact, Seaholm anchors an entirely reimagined and revitalized district that, along with the nearby New Central Library, creates a dynamic civic center. Community benefits include the creation of new jobs, property tax generation, enhanced area connectivity, interpretative celebration of an iconic historical industry, and enhanced public realm. The project is also a showcase of far-reaching partnership; Seaholm EcoDistrict is one of 11 districts in nine North American cities participating in a two-year urban regeneration program.

In terms of special solutions, the project presented an array of unique challenges, including that nearly half of the site involved on-structure construction presenting many technical challenges. One particularly unique solution was the reuse of existing weir structures to provide important water quality and quantity functions. For many years, the interior equipment of the former power plant’s turbine generator building was cooled by water drawn through pipes traveling under the street from the adjacent Lady Bird Lake. After cooling the equipment, the heated condenser water was piped into underground water-cooling tanks and cooled before being released into Lady Bird Lake.  All discharge pipes as well as the existing weirs have been retrofitted to accommodate the functionality of a large-scale rainwater harvesting system. Rainwater collection from the power plant was achieved by modifying the roof, roof drains and sumps, water discharge pipelines and the water-cooling tanks for the plant’s condensers. Two additional buildings also capture and store rainwater and, collectively, approximately 70,000 square feet of total roof surface can capture rainwater. The rainwater harvesting system supplies most of the landscape’s irrigation needs.

The completed transformation blurs the line between historic infrastructure and newly created elements, resulting in a seamlessly unified aesthetic that celebrates Seaholm’s historic legacy and revitalizes it for a new modern era.