The park renewal project aims to introduce interactive outdoor spaces to lighten up the dense industrial neighborhood of Zhengzhou, China. Xijiao, selected to be the leading industrial region for the city in the 50s, was developed, emphasizing productivity setting aside its residents’ livability aspect. The neighborhood has been facing the problem of insufficient functioning green space for outdoor activities for generations.

The 8000 sqm park stands between an old community and a few future high-density developments. Before the reformation, it was a passive space with only a single path, lack of maintenance with untrimmed plants, and no night lighting. Despite being the only park within a 1km range, it was rarely occupied. We also noticed an interesting thing that streets in this area are commonly named with landscape such as Tianshan (Mount Heavenly) St, Longhai (Hill and Ocean) St, Huashan (Mount Hua) St. The community certainly yearn for landscape and nature. Therefore, the main objectives were to provide well-designed spaces for outdoor activities and to create an urban oasis as a glance into nature. 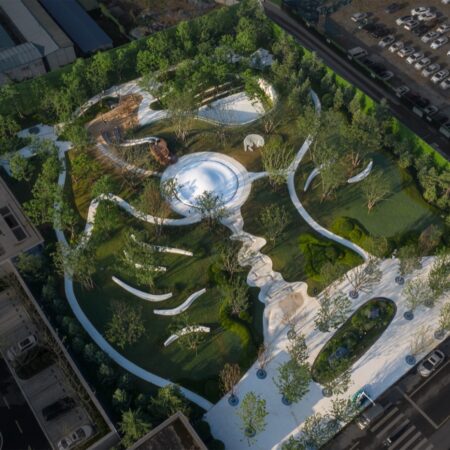 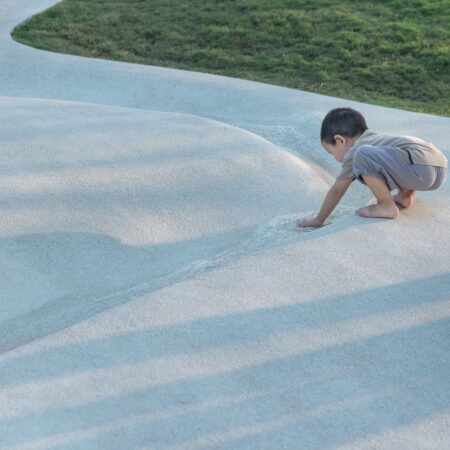 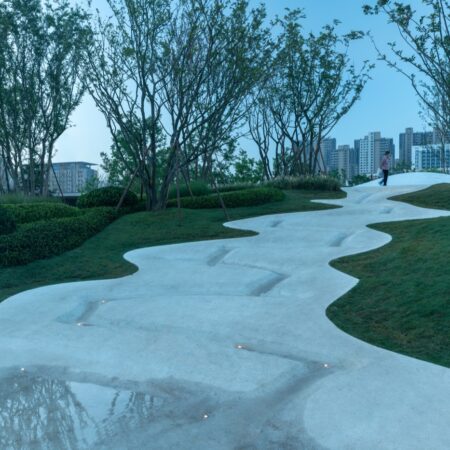 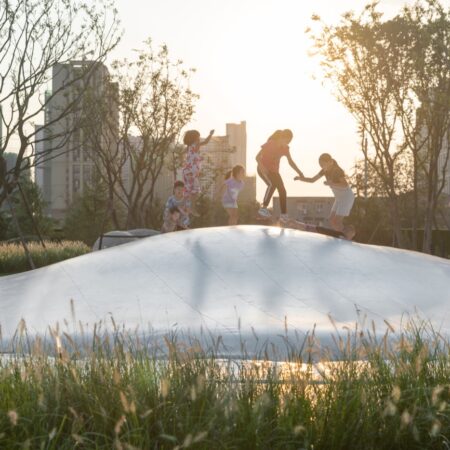 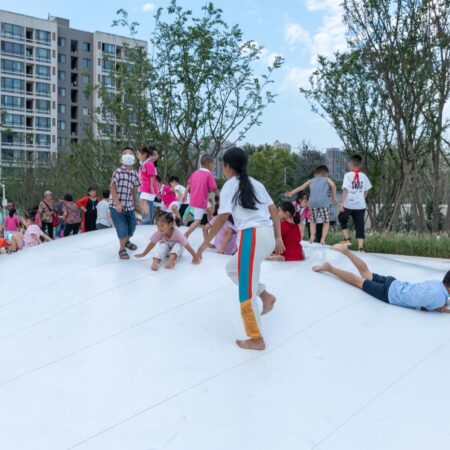 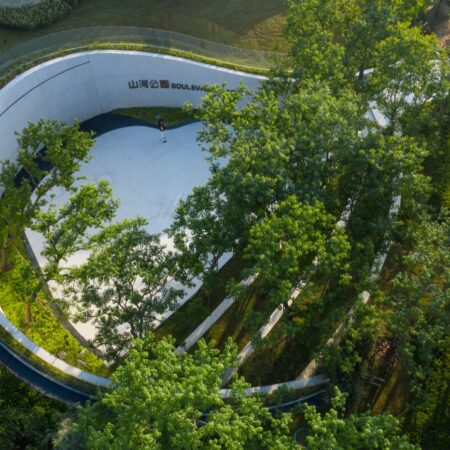 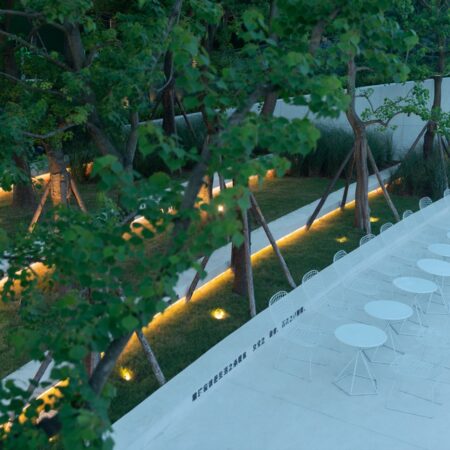 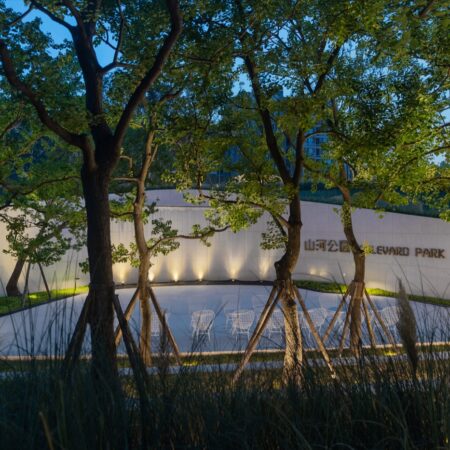 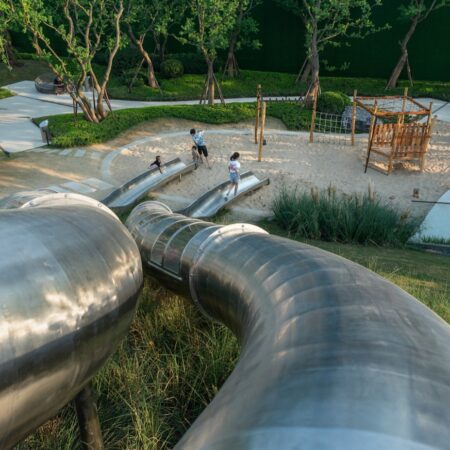 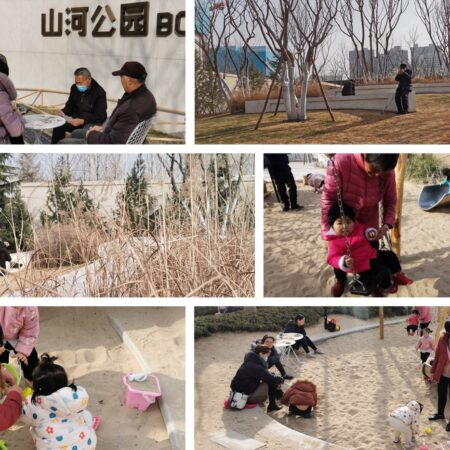 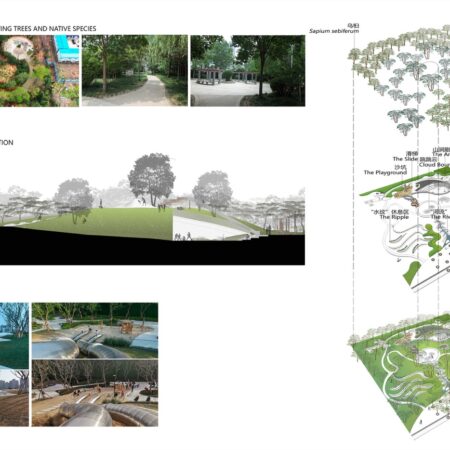 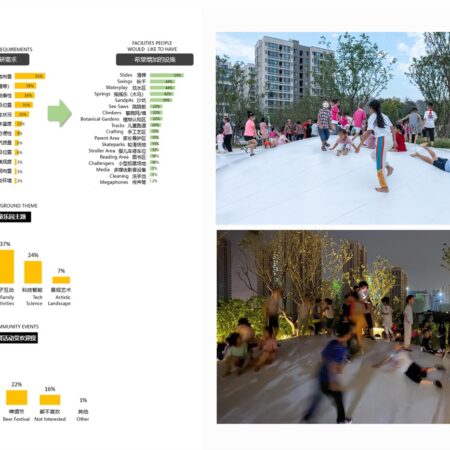 We conducted an intensive community engagement process to ensure that the park redesign meets the community’s actual needs. According to surveys, sports and recreational areas are the most deficient parts in the existing park, prioritizing future design. We found out slides, water play, and sandpits were highly demanded elements, and 44% of the respondents preferred forest-like and more naturalistic themes. Over half of the respondents showed interest in film and music festivals, encouraging us to include a multifunctional space suitable for outdoor events.

Towards Mountain and River

Zhengzhou is where the mother river Huanghe first flows from mountains to the plains, breeding the nation’s first civilizations. The design concept was to embody this connection between people and land in an artistic way. We created a 3m mounted hill as the abstracted base geometry and ran a meandering stream creek down, symbolizing the Huanghe River flowing down from the mountains. The rise and fall of terrain led to explorative activities, providing enclosure for spaces such as the amphitheater.

Cloud bouncing: Wanting some unique design at the top of the hill as final rewarding excitement, we came up with the idea of cloud bouncing, an interpretation of ascending above clouds to enjoy a distant view that the Chinese always enjoyed. The trampoline allowed people of all ages to express themselves, be creative, explore and connect to themselves, others, and their surroundings.

The 11.5m wide cloud-like trampoline is made by durable synthetic film that is wear-resistant, UV resistant, self-cleaning, and does not require additional power. A sand buffer between the trampoline and hardscape is designed for safety concerns.

The Amphitheater: Using the terrain as an acoustic backdrop and screen for imagery projection, the 150sqm performance space with terraced seating set the stage for community gatherings and other social events. The lush, enclosed space is also well shaded and meditating.

The River: The stream meandering down the hill symbolizes the emerge of the Huanghe River. We used molded concrete to create a playable shallow water creek where people can observe the natural process of rainfall gathering and flowing dynamically.

The Ripple: This is a tranquil area of the park with benches that rhythm elegantly like ripples. We wanted to create a place for people to connect with nature, find inner peace in the void and simplicity.

The Playground: Children in the community lack access to high-quality playgrounds. We included a large sandpit and selected play equipment that feature log and timber, allowing children to touch and feel nature elements that are less likely seen in urban environments.

A year since completion, the park has already become a lively center for the community to gather and connect. Residents of all ages fill the park around the clock, emerging themselves in the urban oasis.

Other landscape architecture offices involved in the design of landscape (if any): A&N+ 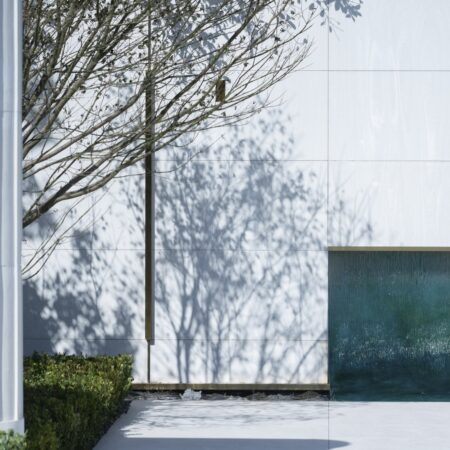 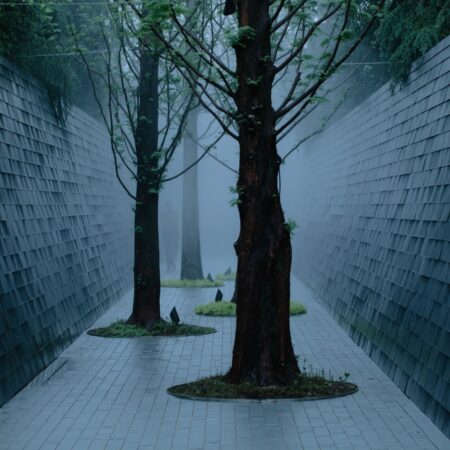 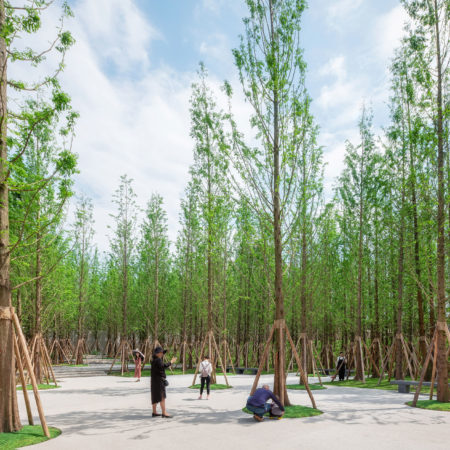