The reconfiguration of the central square of Tirana, the capital of Albania, deals with a public space laden with symbolism. Initially, the square was installed according to an Italian masterplan in the ‘20s, later it served as the core space for events during the communist regime, and arriving in Tirana we found a space that, […]

The reconfiguration of the central square of Tirana, the capital of Albania, deals with a public space laden with symbolism. Initially, the square was installed according to an Italian masterplan in the ‘20s, later it served as the core space for events during the communist regime, and arriving in Tirana we found a space that, although partly undefined, was still clearly a void of a different order in relation to the dense and loosely planned city that had recently developed around it. The competition proposal does in a certain way nothing more than affirming this large scale void, surrounded by a belt of monuments of different periods and reinforced by dense vegetation. The basic ambition of the proposal is to give the people of Tirana a place in the heart of their city where they can look back at the city, retract from it.

More than a shape, the proposal suggests a square that is brought forward from its belt, its surrounding counterpart. This belt is made out of green and shadows and buildings, existing or to be built. The biodiversity of the green is as rich as the collection of buildings. The belt functions like an antechamber to the main square: negotiating between the congestion of the city and the openness of the square, it offers a variety of ways to enter. The square will be sealed and invisible until the moment when one steps in – a void in the chaos of the city, a concentrated space where the experience of time is intensified. The belt is also a retreat in itself. It contains gardens, open-air event spaces and the occasional bar or café. The experience of the project works through the contrast between full and empty, the main experience produced by moving from the square to the belt, and back. The edge between the two will become a loop of different spaces and atmospheres; a loop that can become a natural part of the central boulevard of Tirana along which people stroll. 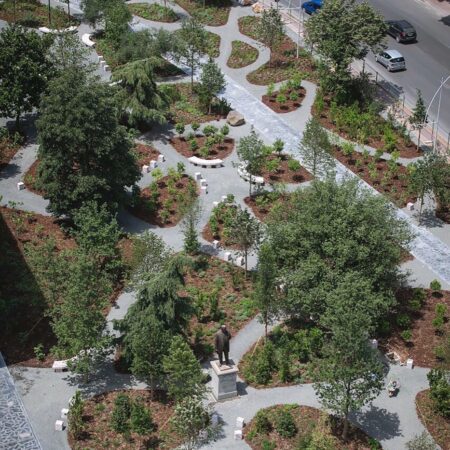 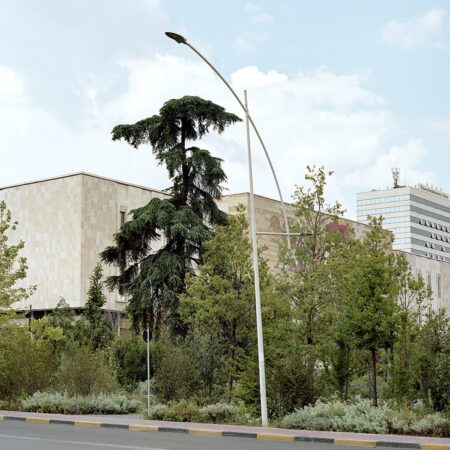 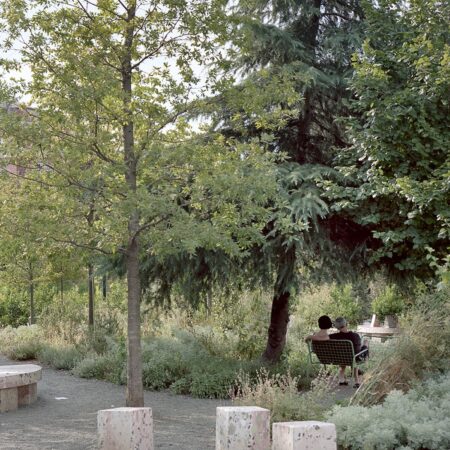 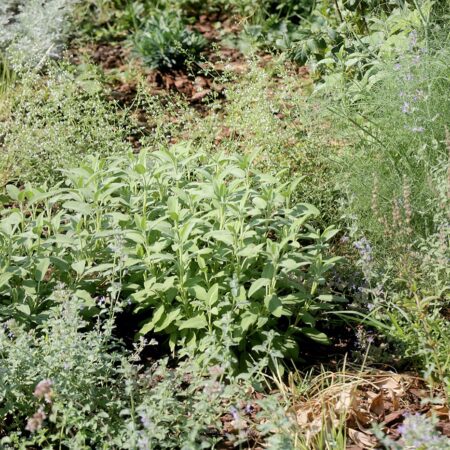 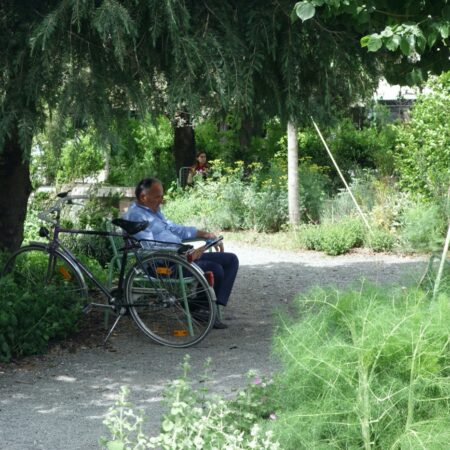 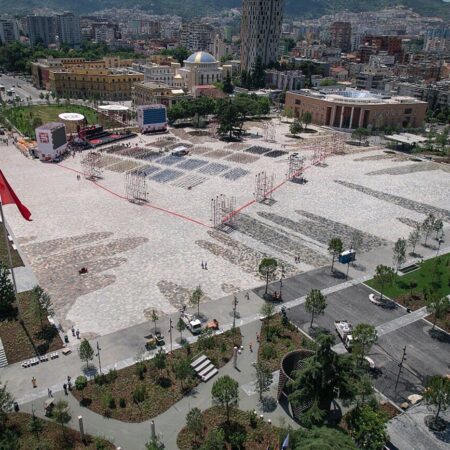 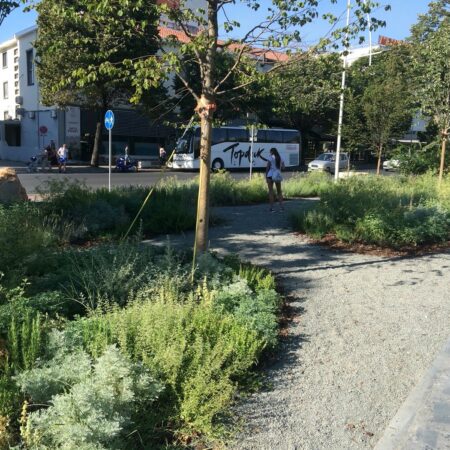 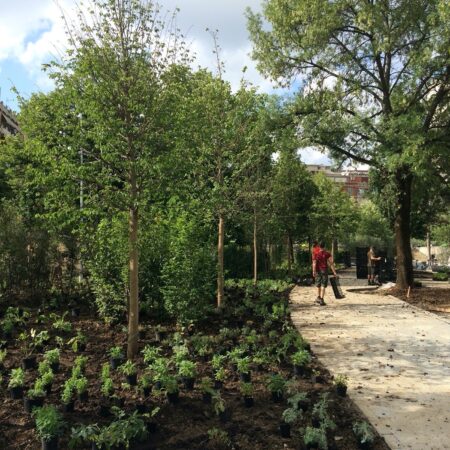 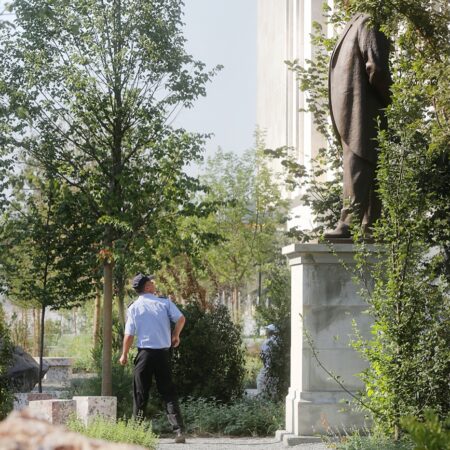 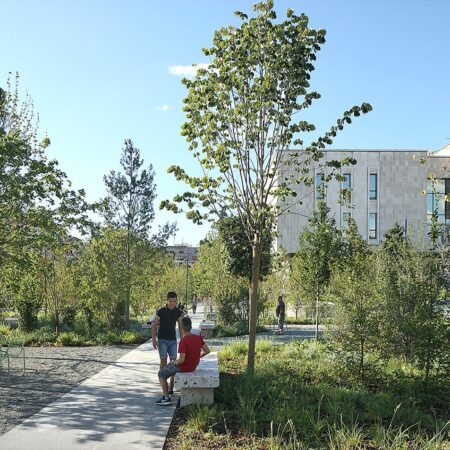 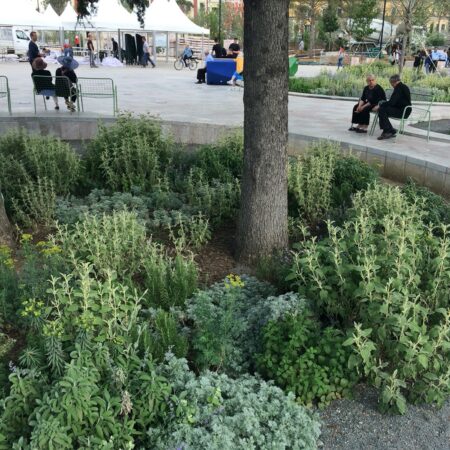 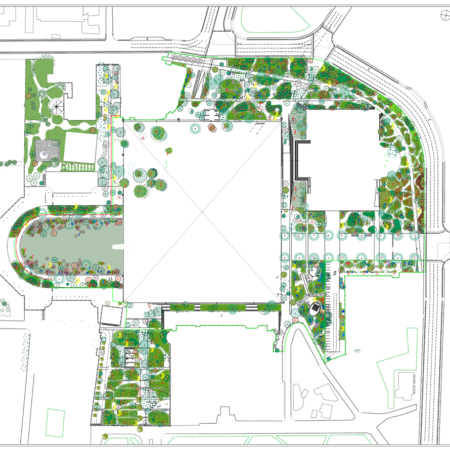 The green belt is designed while questioning the typical image of urban green, especially the green of Tirana, which consists mainly of a layer of trees hovering above empty grass lawns, a model that is very monotonous and flat. The decision to develop a system with different biotopes allows to use nature to make an intense environment that is more varied in substance and experience. This variation is achieved by introducing color, texture, softness, scents, beauty, seasonal interest and sounds into the heart of the city, which altogether soften and naturalize urban living environments and create beneficiary effects on human wellbeing. The biotopes created are sourced from different natural conditions. The forest, the garrigue, the maquis… are taken as starting points to develop new biotopes, inspired by nature but adapted to respond to the urban environment and human presence. As such, the square becomes a laboratory to test the urban biotopes that facilitate human-nature interactions by creating a valuable and functioning ecosystem. By doing so, we can enhance biodiversity and create a natural environment that will over time will grow beyond the square and truly complement the monumental void.

To develop urban biotopes starts from acknowledging the elephant in the room, namely the city and especially humans themselves.  Although an urban ecosystem seems a ’contradictio in terminis’, the term does address the question on how ecology can connect to the city surroundings. It requires the study and application of the relations between organisms -including humans- and to think in cross-over between nature conservation and urban landscaping. Building an urban ecosystem means using natural processes while also trusting nature’s resilience. Oscillating between ecological knowledge and design principles, this approach breaks down boundaries between disciplines and inserts a form of activism into landscape design.

These urban biotopes are conceived as a functional ecosystem, where different layers of plantation work together, not in a static way, but changing and evolving over time. The ecosystem services provided are purifying the air, lessening the heat-island effect, reducing flooding by heavy rain showers. The biotopes are made by using carefully selected indigenous species in combination with well suited and adapted exotic ones, combining species to create vegetations. While designing, complex relationships are facilitated, layering the vegetations to create natural habitats and providing species-adapted measures to stimulate animal life.