Skjervsfossen is situated adjacent to the former highway connecting Norway’s eastern part to the west, an important connection for trade and commerce. Situated at the top of a deep valley, the waterfall drops 135 meters. The upper tier of the falls has a steep twin drop about 70 meters tall, the lower tier is situated immediately below the road, underneath the bridge, comprising the remaining 65 meters drop. The project consists of a nature trail connecting several viewpoints of the upper waterfall, a new parking area with picnic and restroom facilities, and two universally designed pathways leading to the edge at the top of the waterfall and to the bottom of the drop.

For decades, the beauty of Skjervsfossen was under pressure due to heavy commercial traffic on the highway. It was a roadside waterfall some passengers would get a short glimpse of as they drove over the bridge in a car. In 2011, the road government built a tunnel for the main traffic on the highway, and new possibilities for Skjervsfossen as a tourist destination arose. Østengen & Bergo Landscape Architects were signed to sketch the overall concept and a new service area at the upper level of the waterfall. A new restroom building was designed by Fortunen Architects. The existing parking area was a neglected landfill by the river, difficult to access from the narrow road. The waterfall itself was a hidden treasure, guarded by the rough and inaccessible landscape surrounding it. 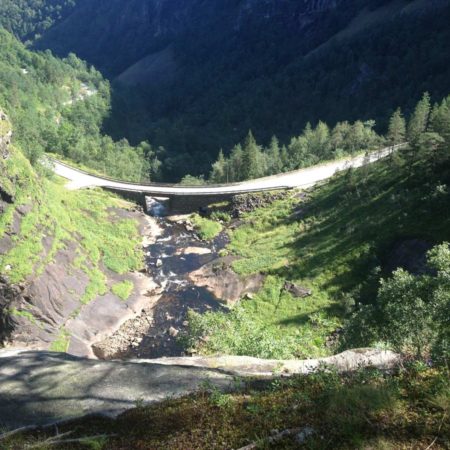 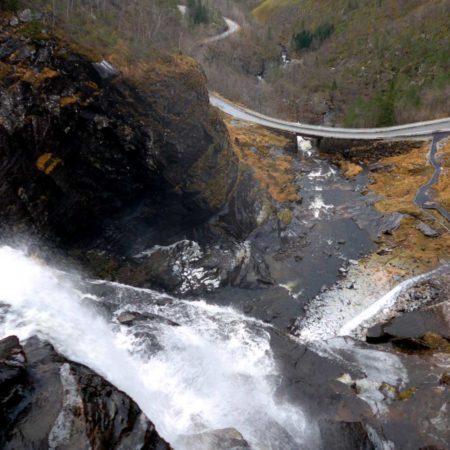 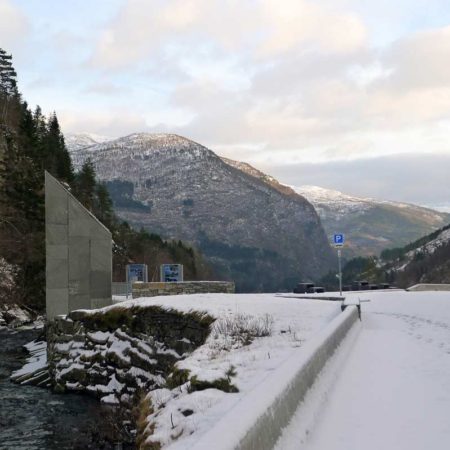 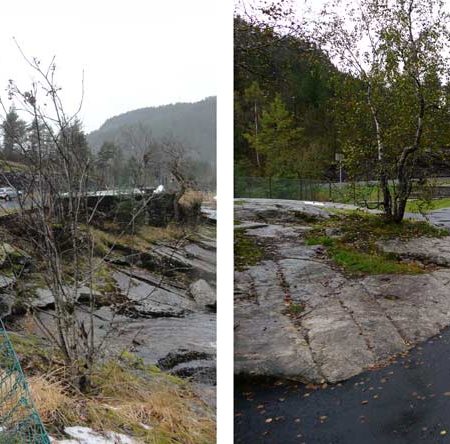 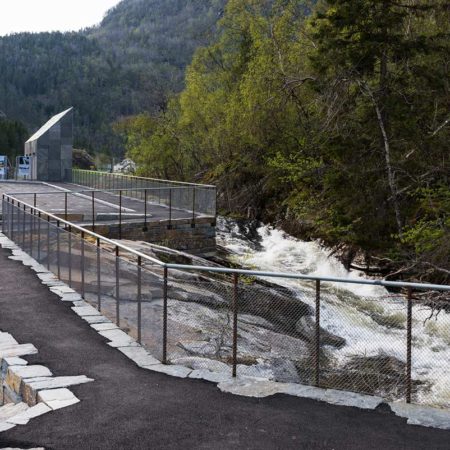 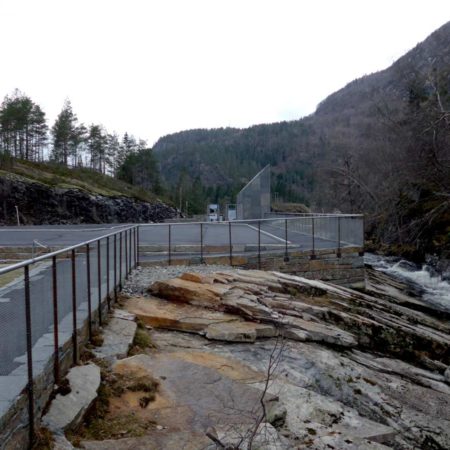 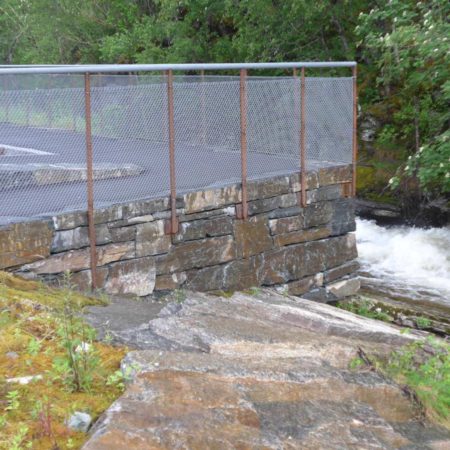 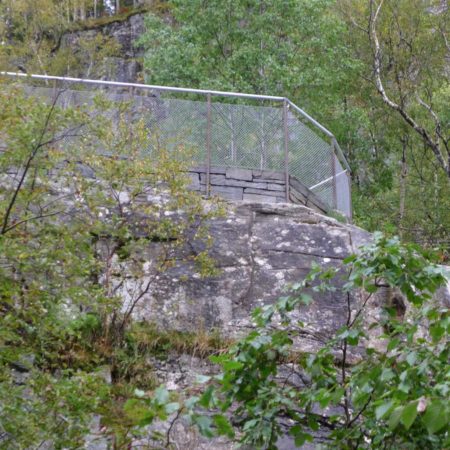 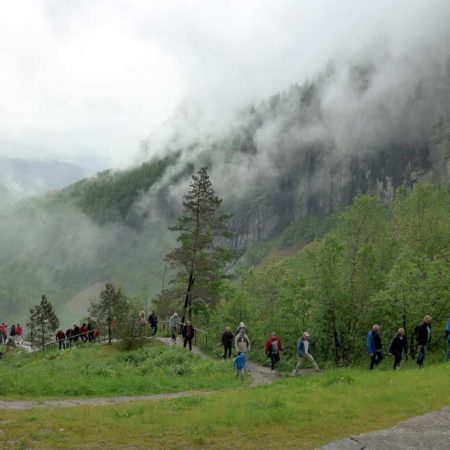 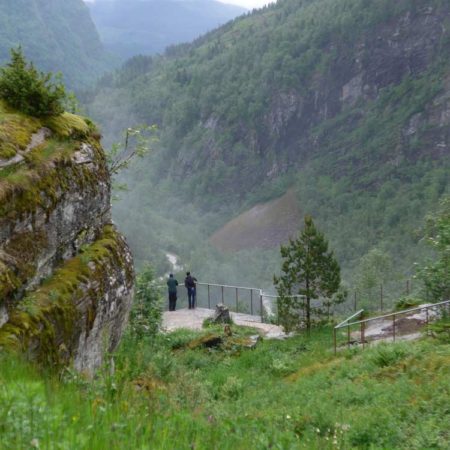 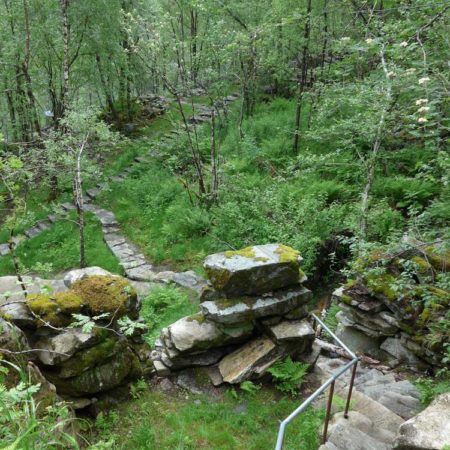 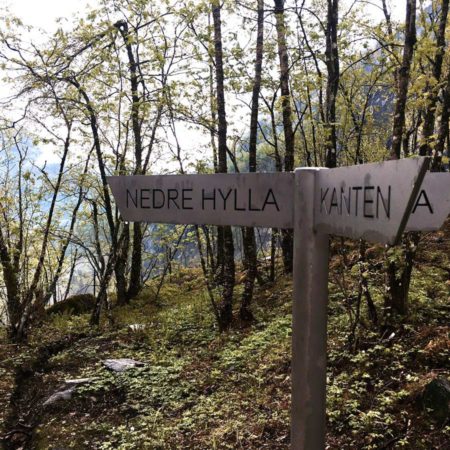 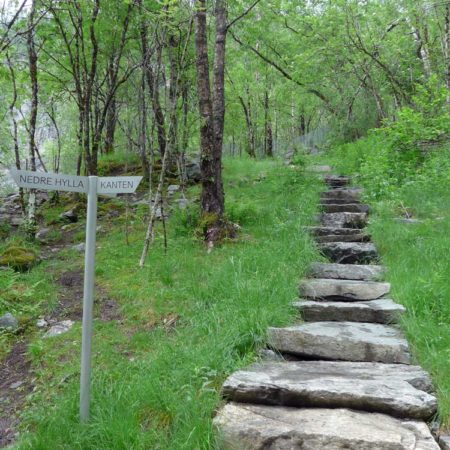 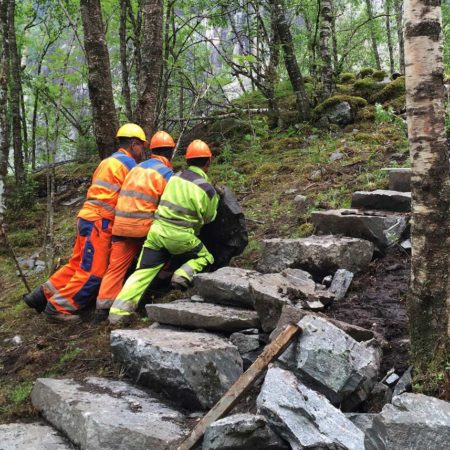 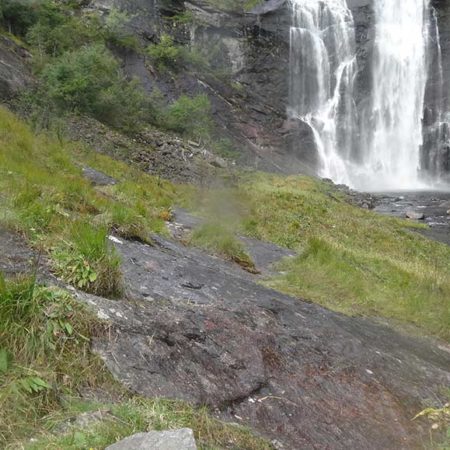 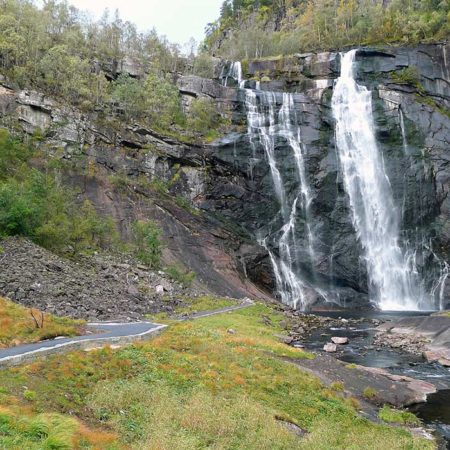 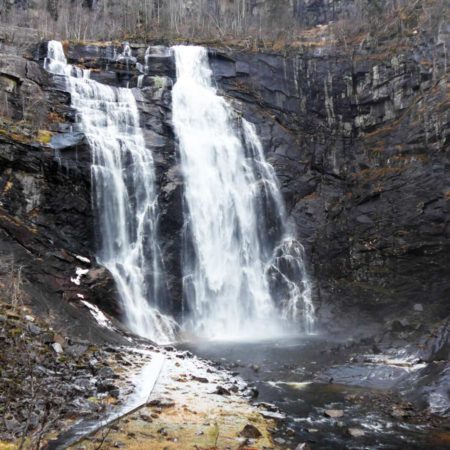 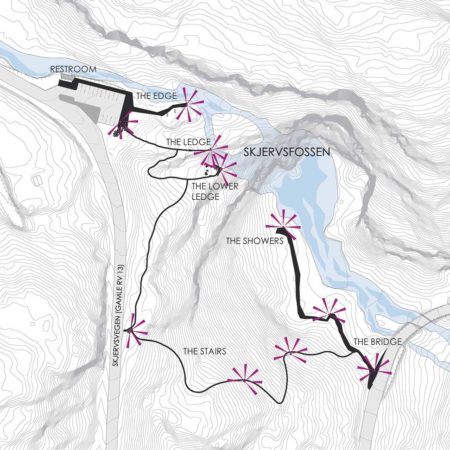 During the analysis of the site, Østengen & Bergo found several points of interest in the area around Skjervsfossen – both beautiful viewpoints and locations of cultural significance. The terrain on site is steep and was almost impossible to walk in. The idea of a trail made from natural stone with both a pathway and stairs, making the area more accessible, became a central nerve in the project. It connects the different experiences of the waterfall and places of interest at several elevations, creating a meeting between nature and culture. The trail in the steepest areas was adapted to the existing terrain on site. The design of the trail differs from the two universally adapted pathways, the service area with parking, restroom and picnic facilities. The pathways have a precise design and a modern form, creating gentle lines in the landscape.
The location of the restroom was decided in collaboration with the architect of the building. The abrupt rising figure of the building creates a landmark seen from the road, but it does not interfere with the landscape and waterfall view once at the parking area. It is formed in a sense of humbleness for the nature, placed directly on the riverbank.

Local natural stone is the main material in the restroom building, service area and nature trails. The color scheme is carefully adapted to the environment, with robust designed fences in rebars and benches in concrete. Tufts of removed grass where stored during construction and put back in to place afterwards. Both in design and execution phase, the rough landscape and rich vegetation by the waterfall has been treated as fragile. The intentions behind the project has been to make gentle interventions in this fragile landscape – making the implementations look like they have always been in there – despite their modern form. Every implementation is well thought through and carefully adapted to the site so that it would not impair the experience of the waterfall from the different levels. Norwegian landscape contractors made the straight lines and precise walls of natural stone, Nepalese Sherpas shaped the stairs of natural stone in terrain on site. Not one of the stones being similar, this kind of work demands knowledge and good craftmanship. The combination of contemporary form, ancient craft and local material creates a timeless dimension to the project. Seen from afar, the implementations in Skjervsfossen are subtle and almost difficult to see. Up close, the trail and pathways have made a spectacular experience accessible.

The Nepalese Sherpas manage a craft almost forgotten in Norway, although the rugged landscape in our country. During the last ten years, a group of Sherpas has come to Norway each summer to create amazing stone work. Their skills and collaboration with Norwegian landscape contractors where crucial for the project in Skjervsfossen. We believe that plan and sections may explore the spatial character of our work, but the experiential qualities consist in the materials themselves, how they are crafted and adapted to the landscape.

Østengen & Bergo wanted to form a project based on the premises of the dramatic nature in Skjervsfossen. Instead of leading the public to one point to view the waterfall from a certain distance and angle, the project invites visitors to teem into and enjoy the landscape by a nature trail and several viewpoints. All of them offer different experiences of the waterfall; either it is by looking at wild river just before it drops, feeling the dizziness standing on the edge of the waterfall or listening to the rumbling of the cascade in the lush forest. At the bottom of the valley, a universally designed pathway leads into the foot of the fall. Here visitors will experience the extreme power of the water – getting completely wet in periods with high water level in the river. In sum, the project seeks to give a broad perception of the waterfall, and thus – create a spectacular feeling and personal experience of Skjervsfossen more than spectacular architecture. This is a part of the vision of treating the landscape as fragile – designing landscape architecture that work silently and naturally together with the nature.