WONDER WOOD – a loop of movement

In the recent years there has been an increased focus on what happens in the schoolyard between the classes, and what play, movement and motor skills can do for the childeren’s learning. In 2013, the philanthropic fund ‘Realdania’ created a campaign, to increase physical activity among school children. The campaign called for ‘action packed playgrounds’ that could also support ‘teaching in movement’ and outdoor learning activities. ‘Wonder Wood’ was selected for realization due to its focus on connections between school, forest and the local community, and for its special aim to activate both couch potatoes and teenage girls and put them in motion. 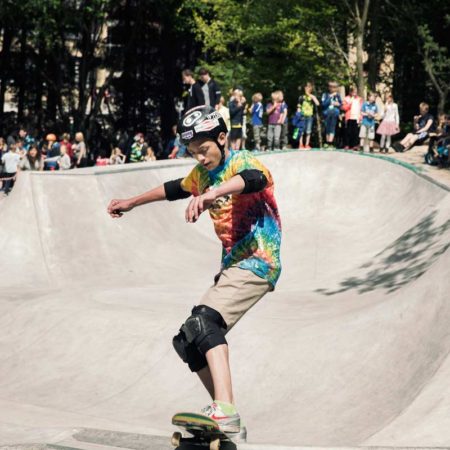 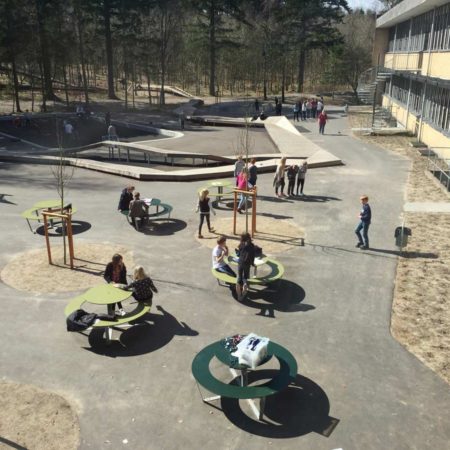 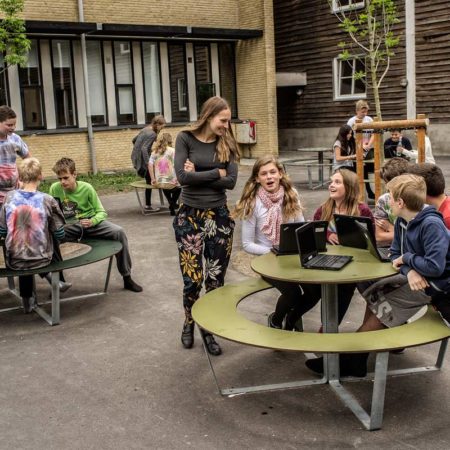 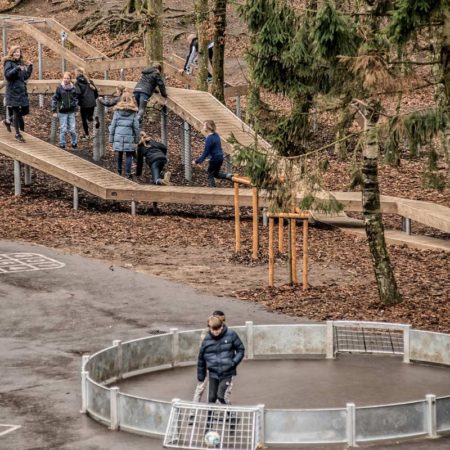 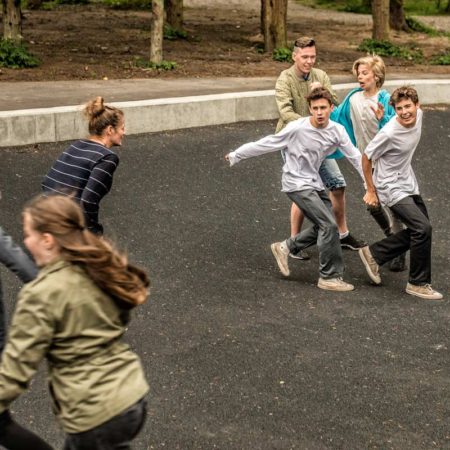 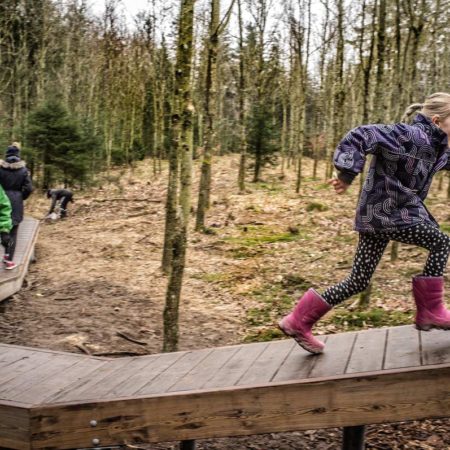 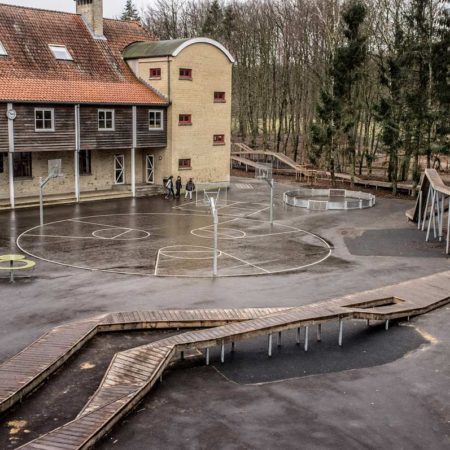 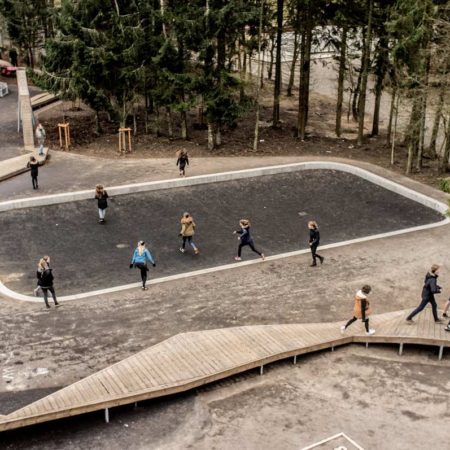 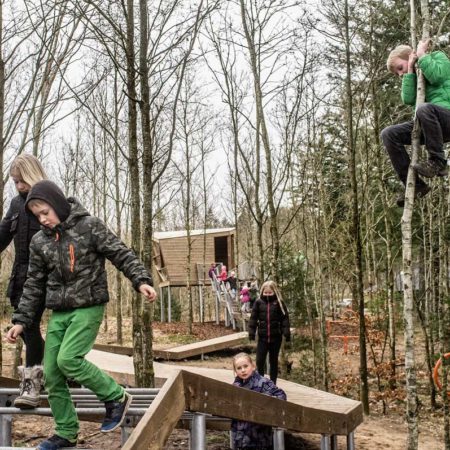 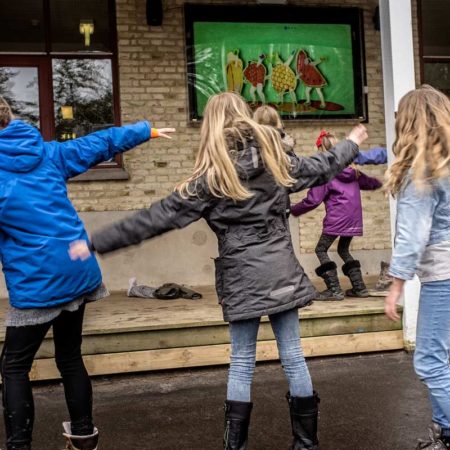 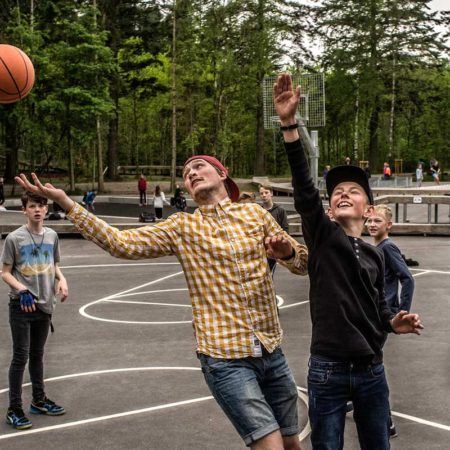 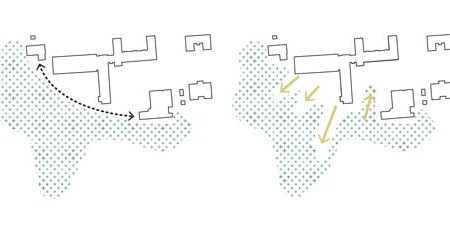 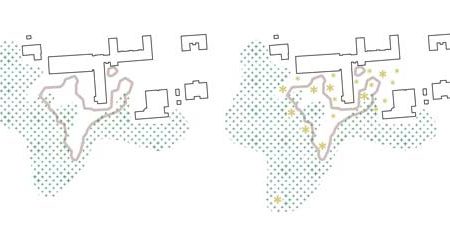 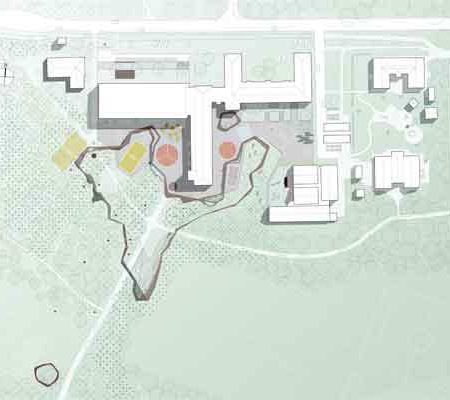 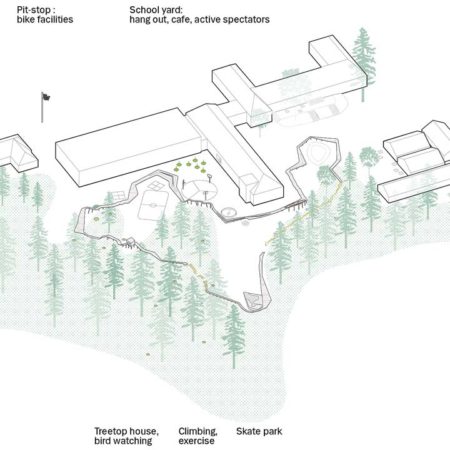 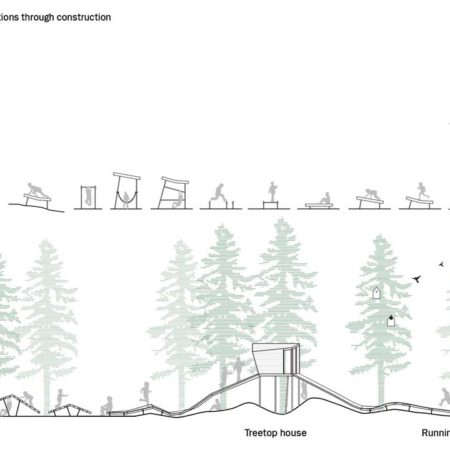 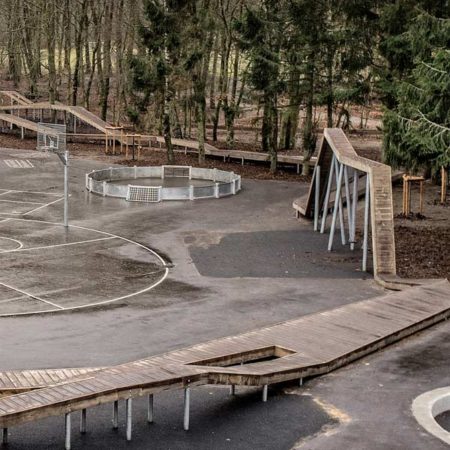 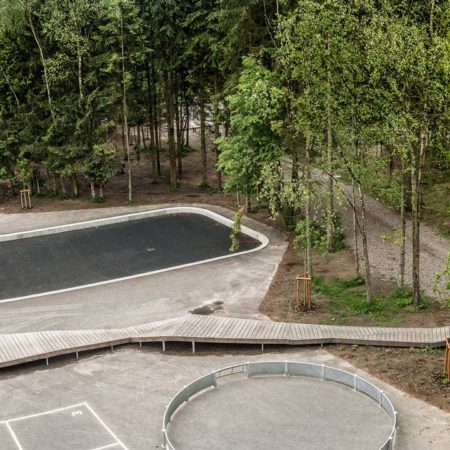 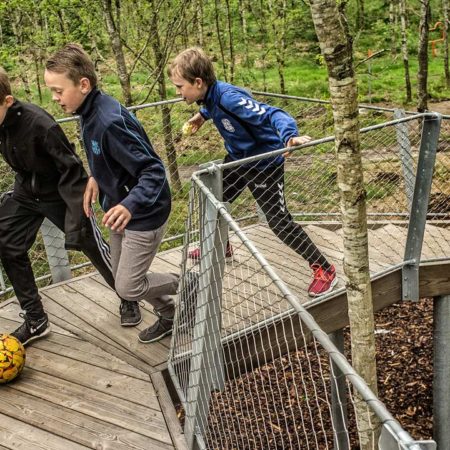 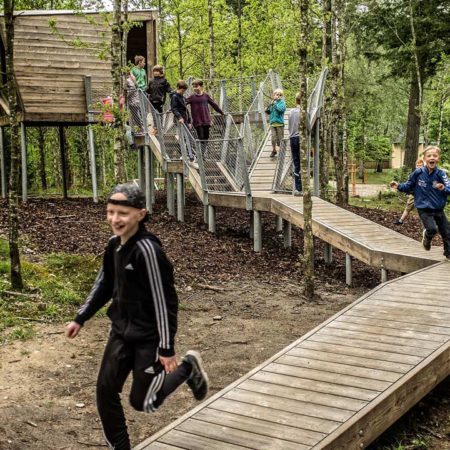 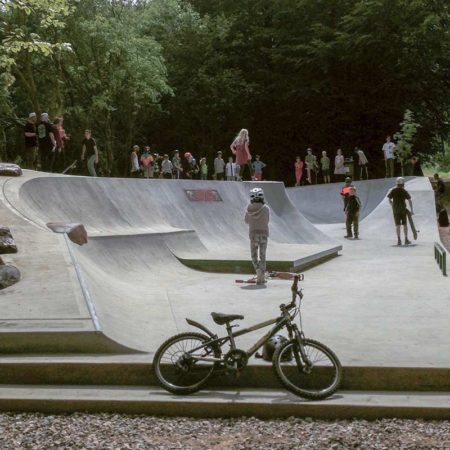 The project has included considerable work with a user participation process which involved the school staff, students and local stakeholders. Our goal has been to create a program which is built around the needs of the groups and based on a fundamental understanding of Skørpings special qualities and capabilities – all in order to exploit the resources of the localilty, and ensure local participation.

The vision of our project is to enhance the joy of movement with a new school yard which merges forest and school together. The forest should not only be a passive framework around the school, but should also become an active part of school life. And in turn the school life must revitalize the forest.
The target group are students at the intermediate and secondary level. Students include; both those who are already active and those who are hard to motivate into activities.
The project had a special focus was on activating the most difficult group – the ‘couch potatoes’ – the socially challenged and mobile-dependent children. The method for this was to create inclusive furniture, increase the number of ball fields and with a large social bench legitamize watching others play.

The project contains three elements; at the forest edge, where we have recreated ‘more of the good space’ by reinforing the edge of the space; cutting away and then adding new plants to extend the forest edge zone. The second element is the continuing ‘forest loop’. The loop is both a route and a spatial element. It takes students completely around the area – from inside the school yard and into the woods and back again. The entire route encompasses many different elements; grandstand, portal, balance beam, climb ladder, hanger benches and a treetop house. Play stations make up the third element of the project fundamentals. The play activities include; playing fields, swings, skating and café tables. For the café environment we have designed a new table-bench set with a ‘café-feel’ that appeals to the older students.

The neighbours and the rest of the community are also enjoying the new facilities. While the school’s students are invited out to play in the forest, the local community is also invited in to use the facilities of the school, and a new ‘loop of relations’ is growing.
Our goal was to create a place that is not only open during school hours, but also used for leisure, which will be the whole community’s meeting place and the starting point for active and recreational use. This has been largely successful and the project is very visited. 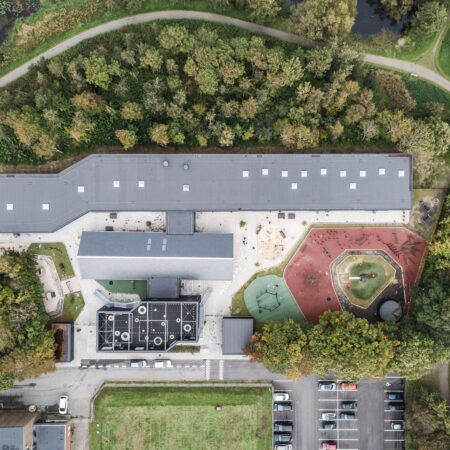 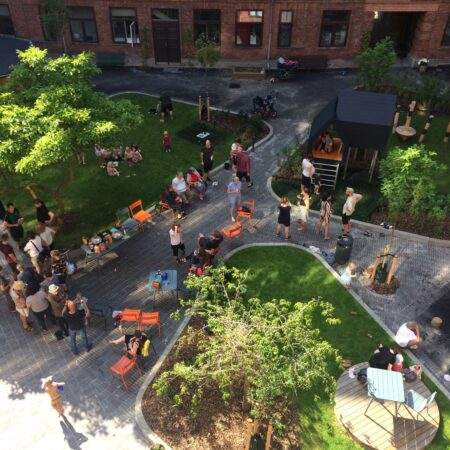 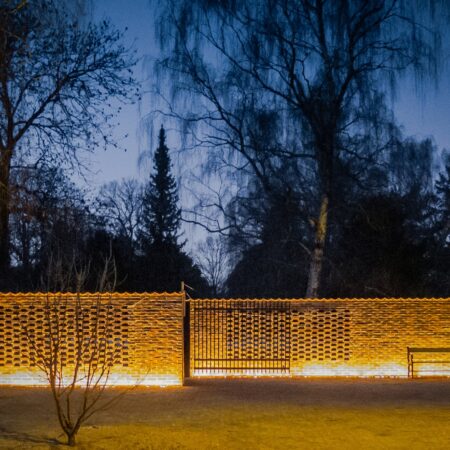 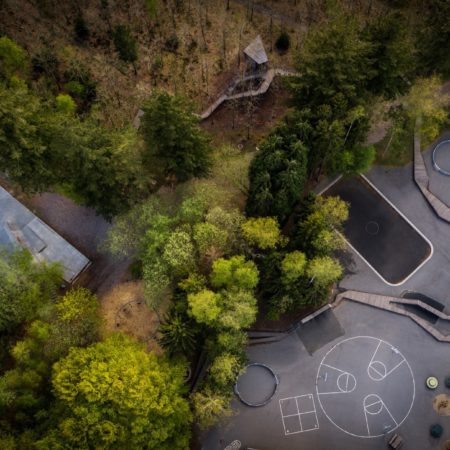 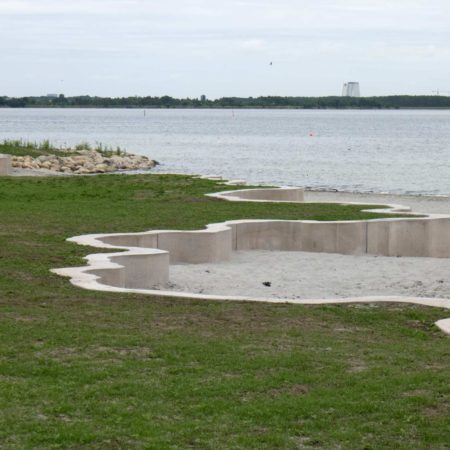