Formerly a decommissioned racetrack in Inglewood, California, a city anxiously in need of neighborhood parks in the southwest of Los Angeles County, SoFi Stadium and Lake Park are the anchors of Hollywood Park, a new 298-acre mixed-use sports and entertainment district. Knitting tightly together with the surrounding neighborhood, the design of this once-in-a-lifetime redevelopment leverages larger potentials: providing an enormous impact in a community that will greatly benefit from the infusion of energy and the economic boost.

The first phase in the redevelopment to open, SoFi Stadium is the new home of the Los Angeles Rams and Los Angeles Chargers and the NFL’s largest stadium at 3.1M square feet (288,500 square meters). Wrapped by 25-acres of public plazas and open spaces including Lake Park—a 12-acre green open space with a constructed 6-acre lake for water retention and recycling—SoFi’s landscape is designed to mutually benefit public well-being and social values while supporting new green infrastructure, climate resiliency, habitat, and biodiversity.

Hailed as “revolutionary” by the Los Angeles Times for its porous, public character, the project breaks the paradigm of stadium design by leveraging Southern California’s warm climate and moving many activities that would typically be inside to the outdoors for use by the community when the stadium is not in use. The result is a 365-day-per-year destination where residents can access public gardens, parks, plazas, habitat, and most importantly, new places in their city for recreation, gatherings, and connection to nature. 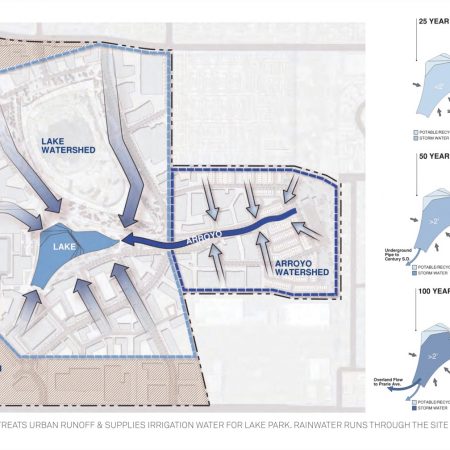 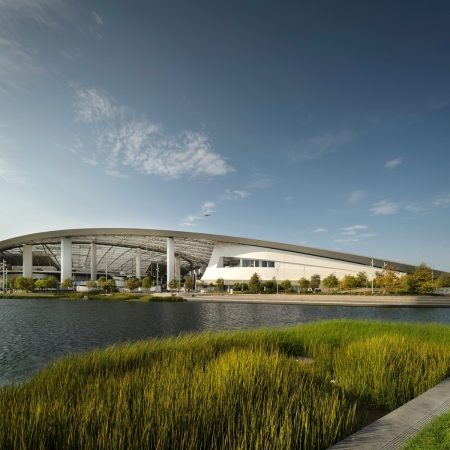 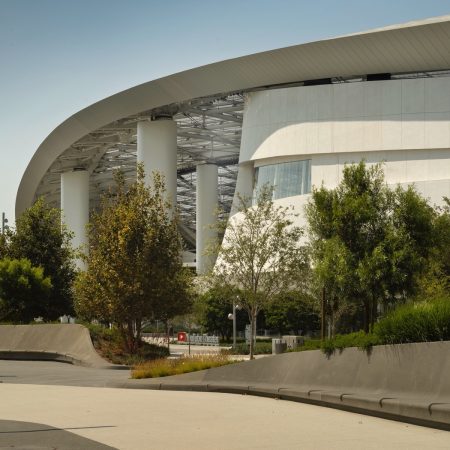 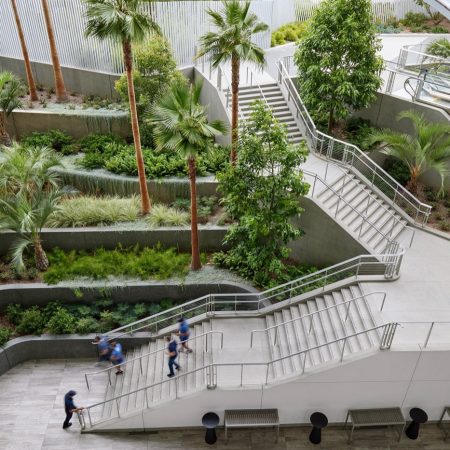 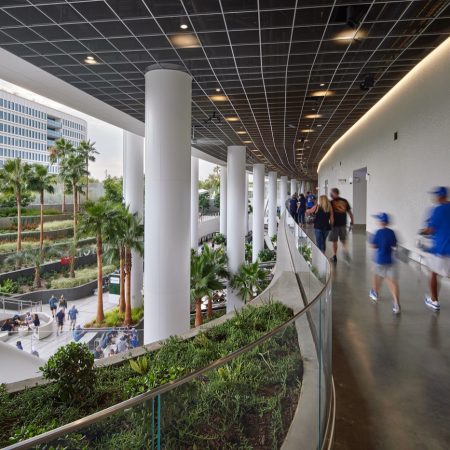 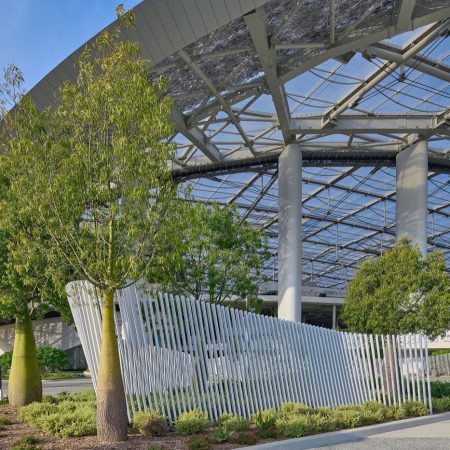 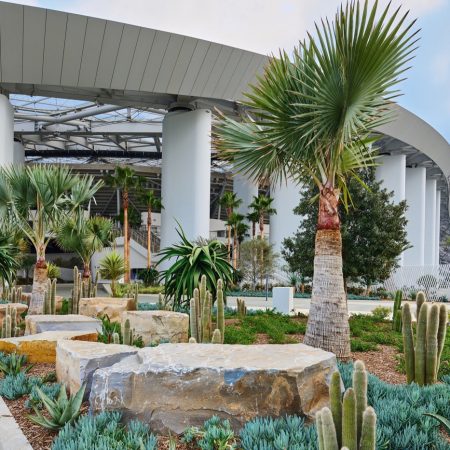 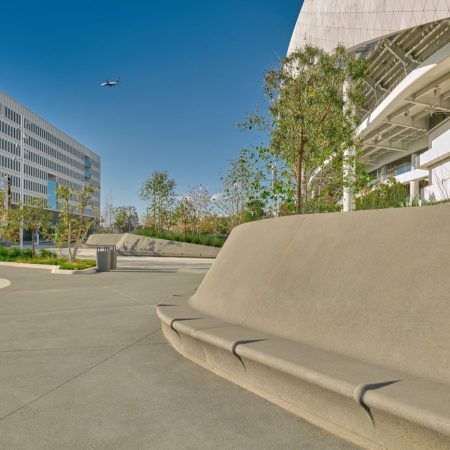 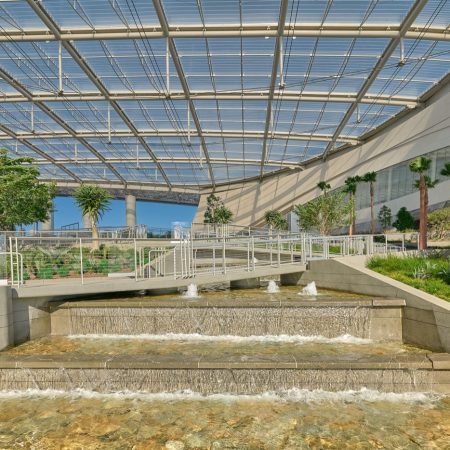 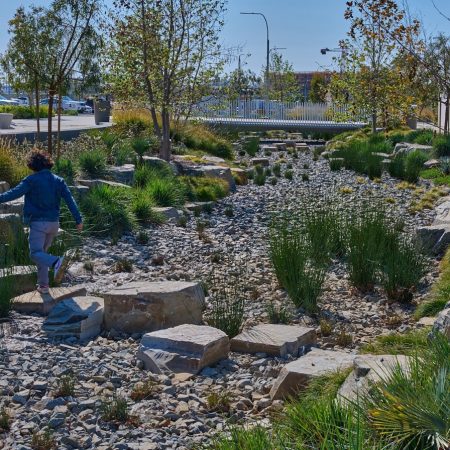 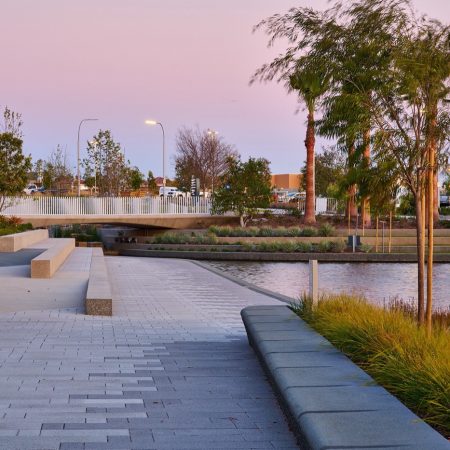 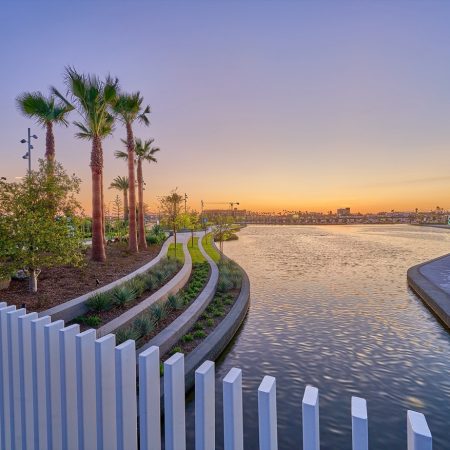 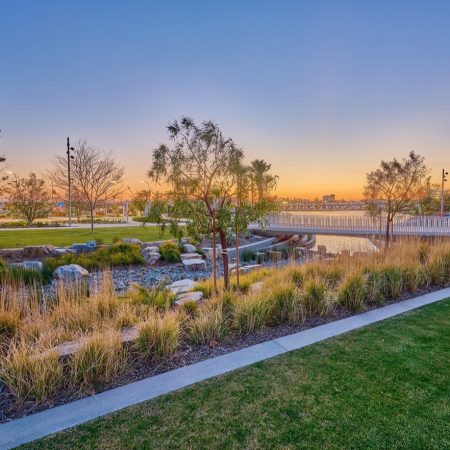 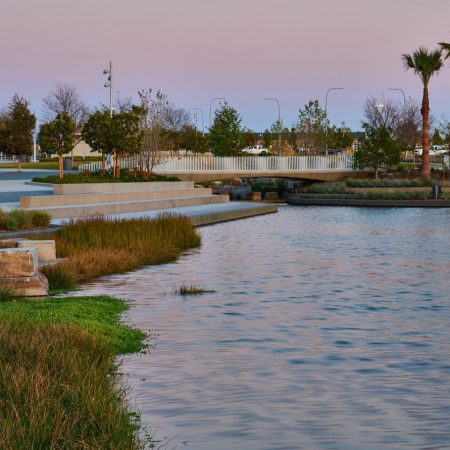 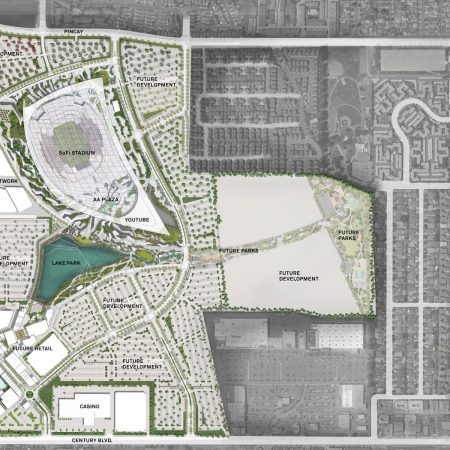 Conceived with deep engagement from a broad coalition of community members, the owners and design team—along with Inglewood’s Economic & Community Development Dept.—worked hand-in-hand on the development’s design. The design team promoted inclusion and equity through a co-created design process free of barriers that valued open, comprehensive community interaction above all else. An enthusiastic Mayor and ownership team with a tremendous creative spirit for sports and for community further amplified the design team’s motivation and imagination to push boundaries.

The landscape spaces around SoFi Stadium are designed for experience, ecosystems, and water. When the development is complete, visitors will be able to engage with 25 acres of open space featuring walking paths, plazas, seating, and gathering areas. The planting program parallels a botanical garden with rich, biodiverse habitat for regional hawks, warblers, monarch butterflies, honeybees, and hundreds of other species along with shrubs, groundcovers, wetlands, and meadows. Employing the Mediterranean biome’s wide arrays of plantings and shrubs suited to hot, dry summers and frost-free winters, the project includes highly diverse, low-maintenance plant ecologies with 5,000 trees, including desert Palm and Joshua trees, sycamores found along arroyos, and mountain evergreens.

Limits to ecological restoration—due to climate change, impermeability, heat island, and air/water quality issues—led to solutions beyond conventional boundaries. The parks and open spaces are performative landscape features collecting, treating, and reusing about 75% of total stormwater through rolling arroyos, bioswales, underground cisterns, and Lake Park, a 6-acre constructed lake that collects stormwater runoff, filtering pollutants through natural wetlands for site irrigation. A site-specific filtration system allows the use of reclaimed water for lake infill. This system was developed in an on-site lab making this the first lake in the region that mixes reclaimed water with stormwater.

Wherever possible, the design team explored multipurpose solutions to create flexible, invisible boundaries and strong indoor-outdoor relationships. A steel sculptural art element that surrounds the stadium gracefully moves through the site while also functioning as security fencing, transforming the stadium from a community space and public park to a secure space during games. Portions of the sculptural fencing are placed inconspicuously within the planter terraces and can be combined with temporary barriers to create distinct plazas for simultaneous events.

SoFi Stadium and Hollywood Park reimagines a long-neglected parcel for public use by transforming unsustainable land into a naturalistic park with over 240,000 lbs/yr of C02 sequestered by new trees and 17 acres of new plantings and habitat. SoFi is the first NFL stadium to be privately financed and is a prime example of how public-private partnerships can bring new infrastructure, parks, streets, and other public improvements to cities. In addition to rejuvenating Inglewood environmentally and socially, the development’s thousands of union jobs provide an equitable economic lift to the region which continues when SoFi hosts numerous events like the Super Bowl and the 2028 Olympics.