Located in west Belfast, Springfield Dam and Springfield Park are recently opened up and transformed public open spaces, resulting from an ambitious initiative funded by the EU Peace IV (Peace + Reconciliation) and the Department for Communities.  The project, cost of £1.2 million, is part of the first phase of the Forth Meadow Community Greenway project which aims to connect a series of existing open spaces in north and west Belfast along a 12 km route.

Studying maps and aerial photography of west Belfast, it’s easy to see why Springfield Dam would have been considered an important cog in this project.  Dating from the 18th century, when it was part of the successful Springfield Cotton Factory, the dam’s shape remains comparable to that shown on historic ordnance survey mapping, though the once rural area with a few mills became amalgamated into the city over the 20th century.  The Springfield Factory was a major employer and part of the city’s industrial history but finally closed in the 1960s, along with other industries in this area, due to 20th century market changes; economic and social problems were then exacerbated by the subsequent Troubles.

Following the closure, the dam and peripheral landscape was undoubtably a no-go area for decades despite having the aesthetic appeal of a large water body bound by mature trees and being a designated Local Landscape Policy Area.  The dam had found itself located in a contentious area languishing on an interface between two communities with major health, safety and social concerns resulting in it being bound by unsightly security fencing in a manner that suggested if it was closed off, these problems might go away. The fence didn’t really keep anyone out and the baseline was that this was a dangerous and undesirable space subject to regular anti-social activity that was in need of major rethink. 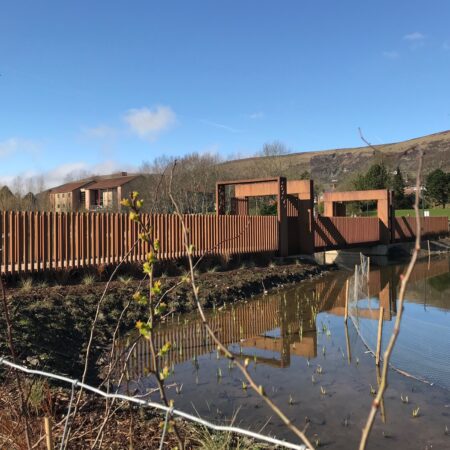 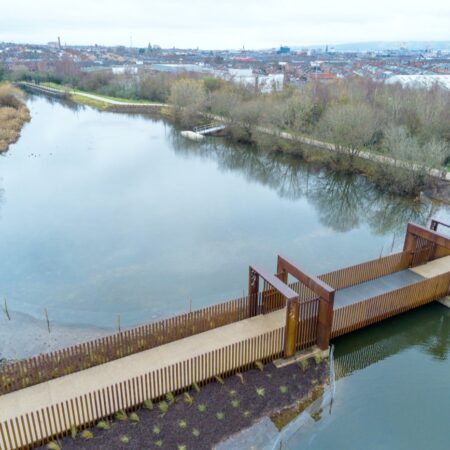 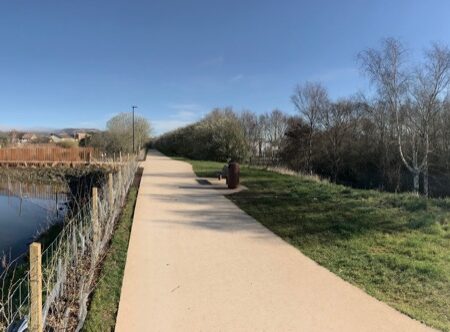 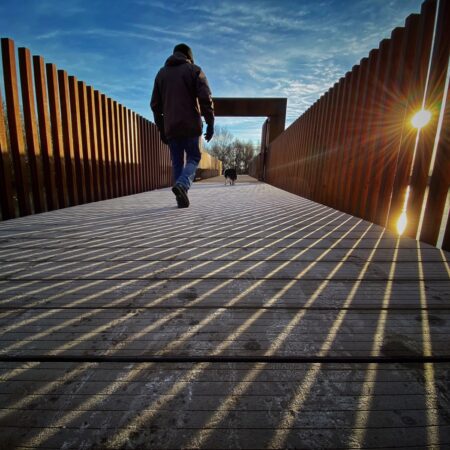 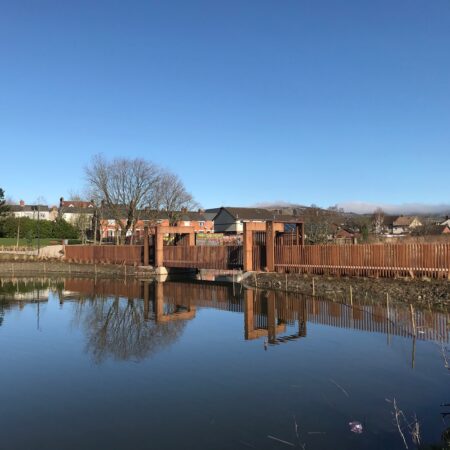 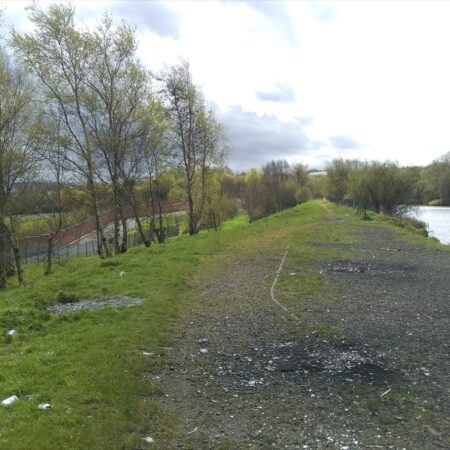 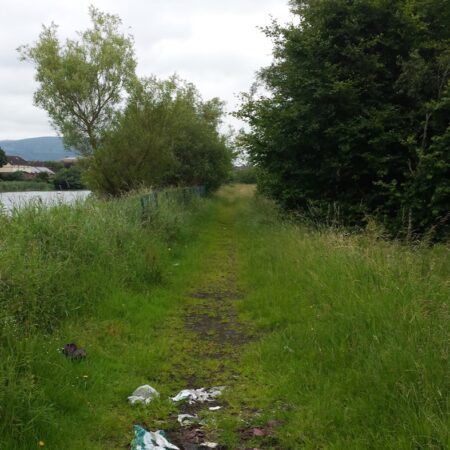 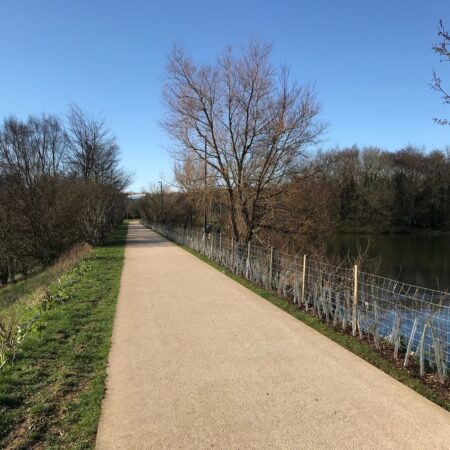 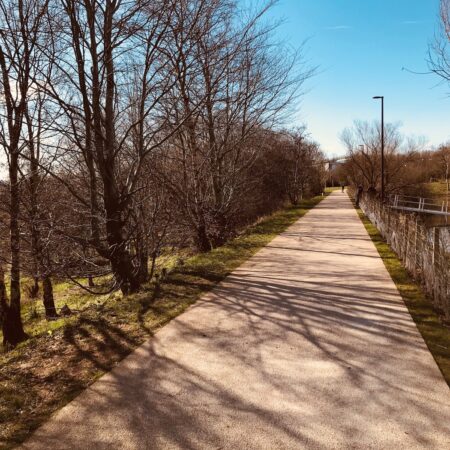 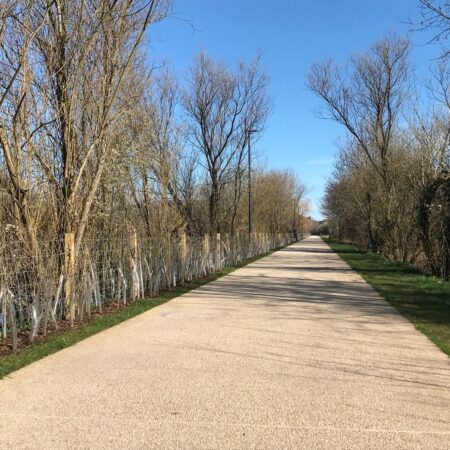 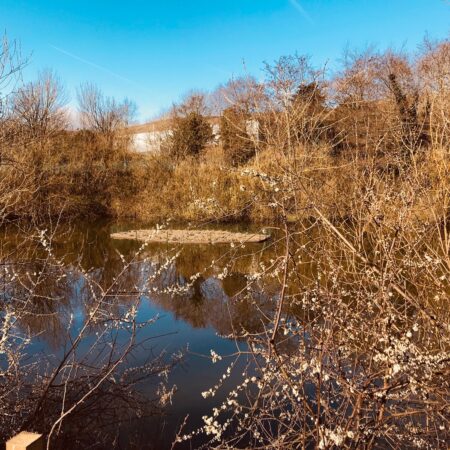 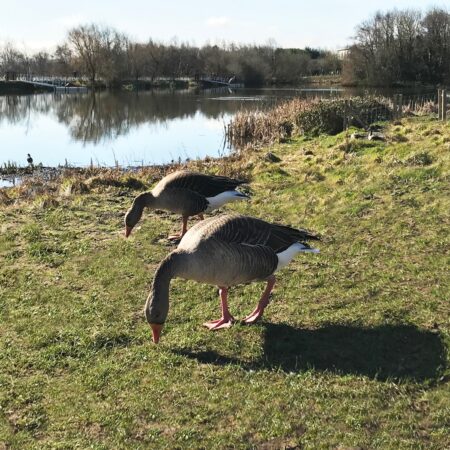 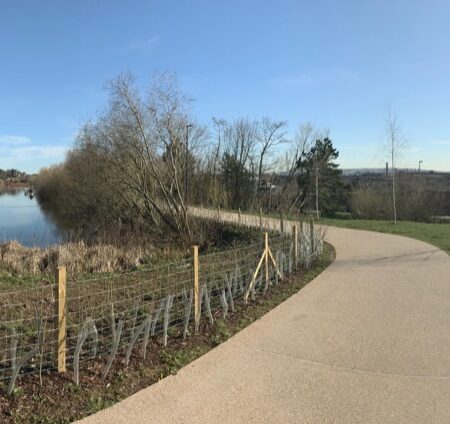 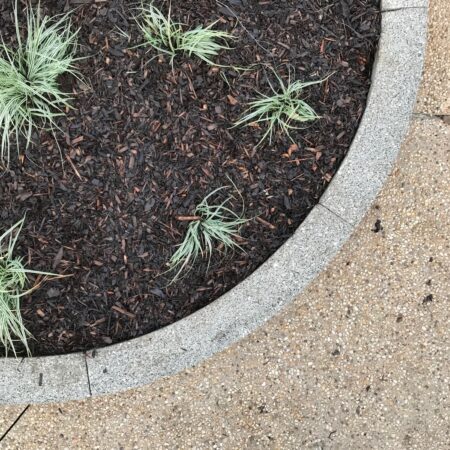 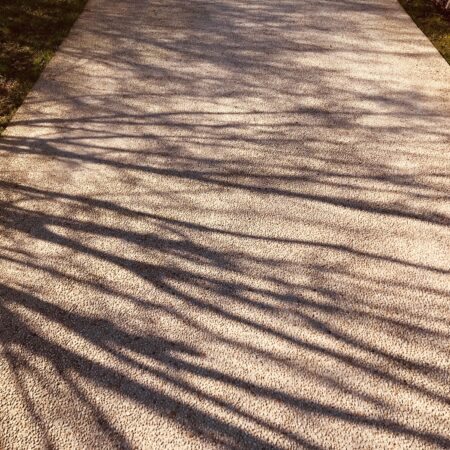 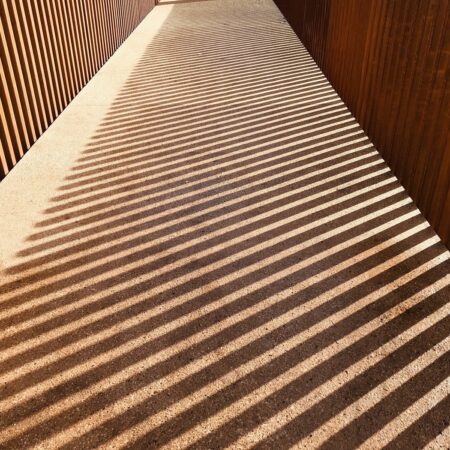 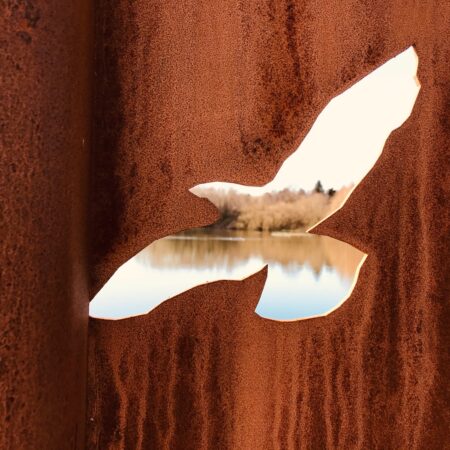 In 2015, AECOM Landscape Architects were engaged by Belfast City Council to develop options for both the dam and the adjacent Springfield Park with the objective of merging the two spaces in a singular public asset. This process included public consultation with the local community and housing associations and statutory bodies such as NIEA on account of the dam’s ecology designations that all needed to feed into the landscape design.  The multi-disciplinary practice was also engaged to provide geo-technical and engineering advice to determine how best to ensure that the technical aspects related to the old dam structure were addressed to ensure its long term integrity (something of significant importance given its age and city location).  This work all formed the basis of the planning application in 2019 for the “environmental and ecological improvements works comprising upgrades to existing entrances, provision of a new entrance, rearrangement of existing car parking, enhancements to existing paths including a proposed circular pathway and landscaping. Installation of a causeway bridge, modular classroom, fishing stands, floating habitat islands, fencing, lighting, and additional street furniture”.  The works were completed and the new “Springfield Dam Park” opened to the public in December 2020.

The dam has been opened up and become the key focus and aesthetic base of the collective park.  Overgrown scrub swamped by briar and large-scale fly-tipping were removed from the dam periphery having the double bonus of both cleaning the site and opening up views across the city. This was instrumental in starting to change the perception of the dam as a forgotten hostile place into positive and attractive landscape.

The dam structure had to be worked around with construction restrictions set in place to ensure no damage was caused. This meant that works had to be planned in such a way that no heavy machinery, storage or construction activity took place on dam edges. For the most part this was relatively easy to address as works were largely related to scrub removal, management or tidying up.  However, a key element of the design – indeed its visual statement in terms of community integration, connectivity and focus – was a new pedestrian and cycle bridge across the dam. This new connectivity was the focus of community consideration as it was felt by some housing groups that it opened up this area too much and there was understandable concern based on a legacy of anti-social behaviour issues. A compromise was agreed through the installation of a lockable gate (for night-time) though this then presented a design challenge, which was resolved by making the 10m long bridge and associated causeway more a focal point and feature. There is, of course, the hope and aspiration that the gates become redundant in time. A further objective is that the park can be used 24/7 and all paths and key points have been appropriately aligned with lighting columns or bollards (including bespoke lighting in the dam walls).

The clearance of any existing vegetation was undertaken in coordination with ecologists (AECOM).  While being an abandoned site for several decades, this had provided the opportunity for ecology and wildlife to establish and any construction works and changes to the environment were managed in terms of timing and mitigation to ensure that the resulting area was enhanced for biodiversity. The most evident additions are the new floating islands anchored to the south of the dam, which are carefully pre-planted ecosystems.

Outdoor spaces in the city have become so much more valued in recent times and the consensus appears to be that the park could not have opened at a better time providing a major asset for local people and visitors including fishermen, families and recreational users.  Subject to significant use coming from a broad range of age groups across both communities, it is very notable that there has not been one report of anti-social behaviour or sign of vandalism suggesting that the design team have delivered a great example of how collaborative working can achieve shared goals delivering not only physical renewal but also deliver social and community benefit.