The studio deals with design, ranging from the territorial scale to the detailed design, from master plan to the executive project, finding a professional natural expression in urban planning, which becomes the laboratory for testing strategies and methods for the transformation of the contemporary city. Based on the idea that using the territory is crucial for the development of human activities and the quality of contemporary life, the studio’s central research, concerns the open space and urban and territory infrastructure, designed not only as the space of flows, but as a tool for eco-sustainable city building.
Beyond the design, the company supports specific research activity, conducted in the academic environment (University of Trieste and Venice IUAV).
In recent years, the company dedicated itself to landscape design applied to urban planning, thus to landscape urbanism, an approach calling for forms of integration between the contemporary economic systems, ecological condition and city urban design.

Arch Claudia Marcon – legal representative and founding partner
She graduated in the Faculty of Architecture in Trieste – University of Trieste in 2007. In 2012 she obtained a PhD in Integrated Science for Territorial Sustainability. She specialized in landscape design, environmental graphics and planning of slow mobility. Currently she is a Professor at the Department of Engineering and Architecture, University of Trieste.

Arch. Elisa Crosilla – Associate Architect
She graduated at the Department of Engineering and Architecture of the University of Trieste in 2013. She specialized in the field of Geographic Information Systems, in urban planning and Smart City.

Arch. Diana Lohse Álvarez – Associate Architect
She graduated at the Faculty of Architecture of the University of Chile, Santiago, in 2007. In 2009 she obtained a first degree Master of Science at the Polytechnic of Turin, specializing in the field of territory planning and landscaping

Arch. Chiara Padrone – Associate Architect
She graduated at the Department of Engineering and Architecture of the University of Trieste in 2013. She takes care of the communication and deals with tender calls

Arch. Roberta Moretton – Associate Architect
She graduated at the Department of Engineering and Architecture of the University of Trieste in 2012. She specialized in management of public works.

Paes. Roberto Bonutto – Associate Architect
He graduated at the University of Genova in 2016. He specialized in landscape and green design. 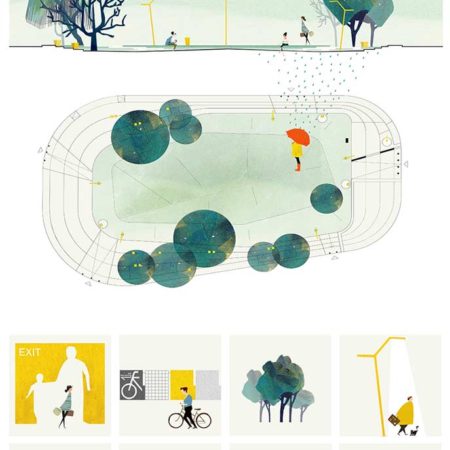 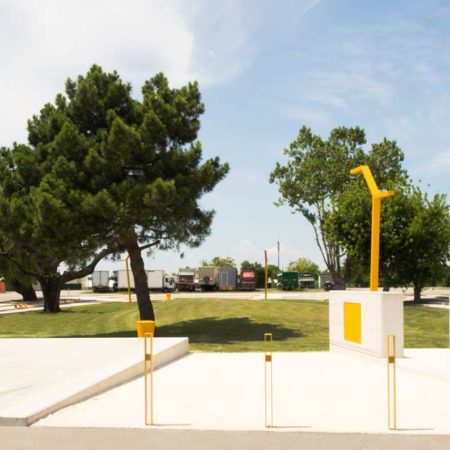 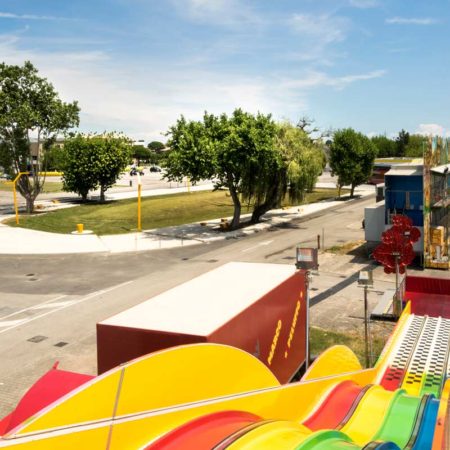 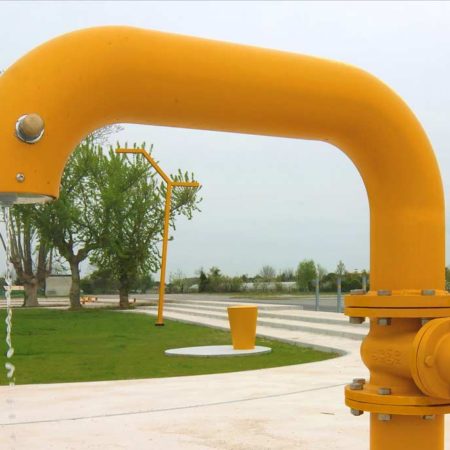 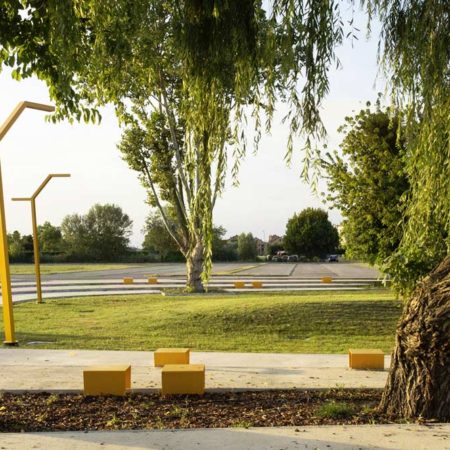 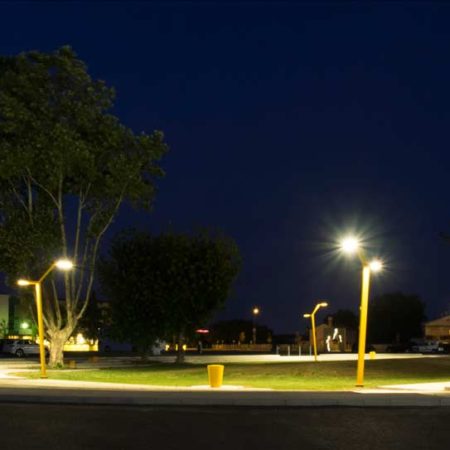 The project site is very lively place, one of the most crowded in the area, since various uses of the place change through-out the day, week, season: usually it’s a car park and travel bus park, for one time a week in the area there is the market and in the summer sometimes there is the amusement park and the new bicycle park. Given its sizen and its location, the project area lends itself to be interpreted as a real “concrete platform” apparently isolated and disconnected with the surrounding landscape. At the centre of the platform there is the project area that was an abandoned space, who is distinguishing trait by an elliptical shape. So, this area represents a “hole” in the big market platform. The project wants to transform this “hole” in a new green arena in the centre of the the market. The project wants to accentuate the elliptical shape by setting up some steps that “gently” down inside the Green Arena. The green area, has been molded as a “hill”, in order to be visible from ever point of the platform. The green Arena also was further punctured by existing trees. There as well as becoming a well recognizable and visible points provide shade and coolness to reviewers. 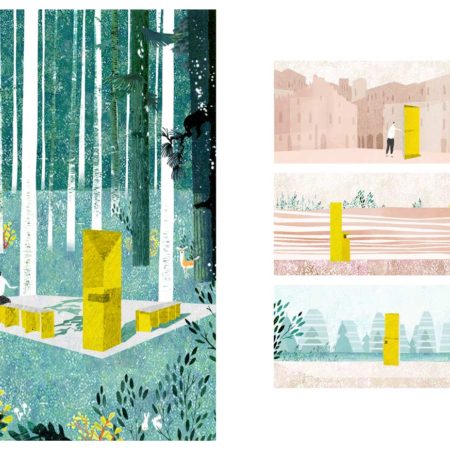 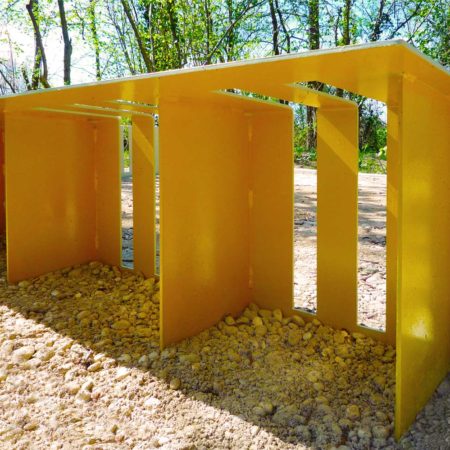 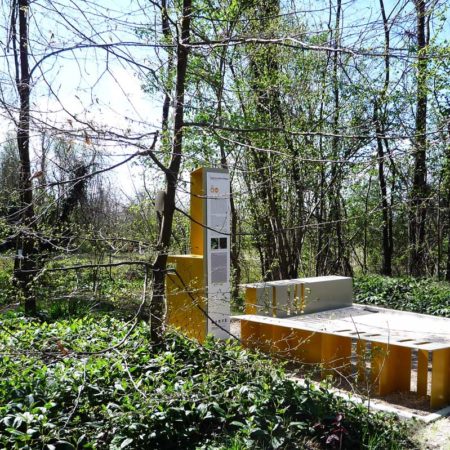 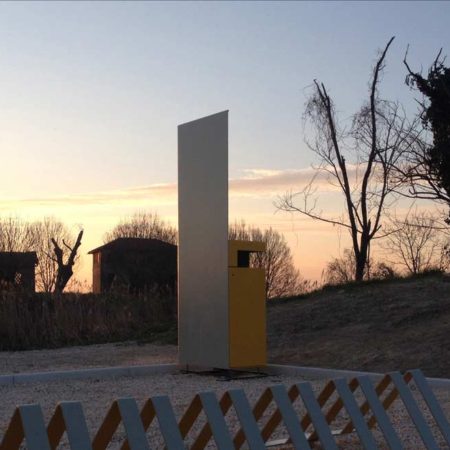 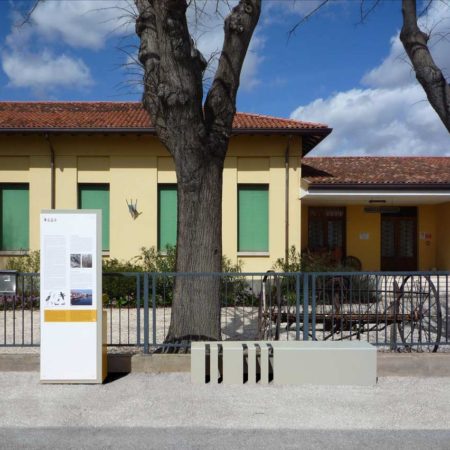 The project “GIRALEMENE” aims to enhance the landscape elements and the aspects common to the various territorial crossed by the GiraLemene: a historical and naturalistic pedestrian path that stretches for about 39 km on the River Lemene and develops through the municipalities of Caorle, Concordia Sagittaria, Portogruaro and Gruaro. The project does not foresee the creation of tracks, but It aims to signal paths and deviations that lead to the existing artistic, cultural and landscape sites, strengthen and realize the tourist signs, for the valorization of the historical, cultural and natural resources of the territory. The project so wants to create an “open museum”. The itinerary GiraLemene, in fact, wants to develop a new eco-tourism, based on the rediscovery and enhancement of natural and cultural heritage – tangible and intangible – that are present along the river, as well as on the sale of the typical agricultural products ,that are the expression of an ancient culinary tradition of the Eastern Veneto. 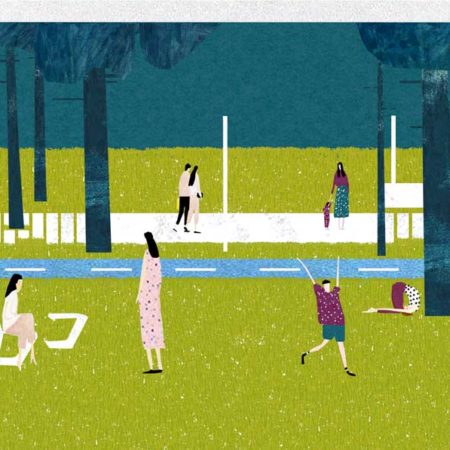 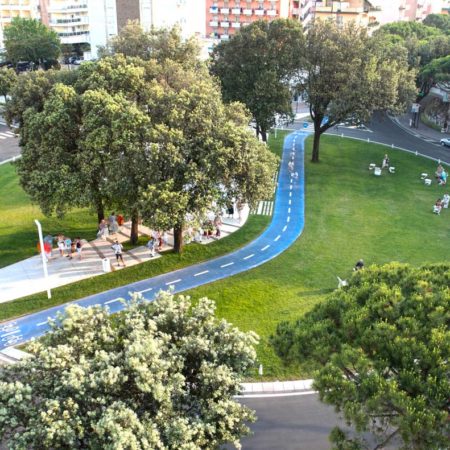 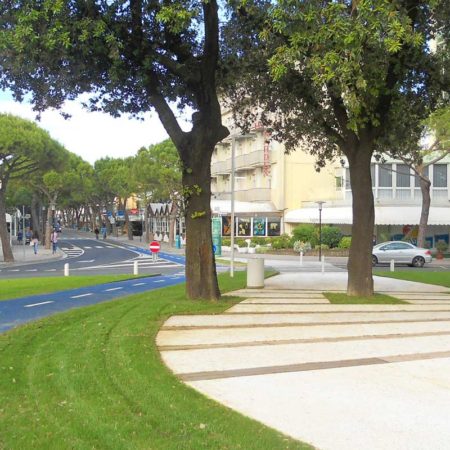 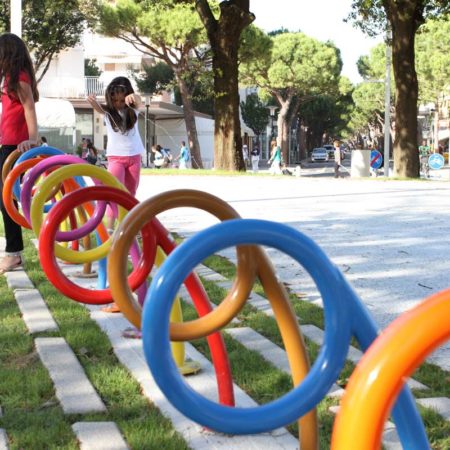 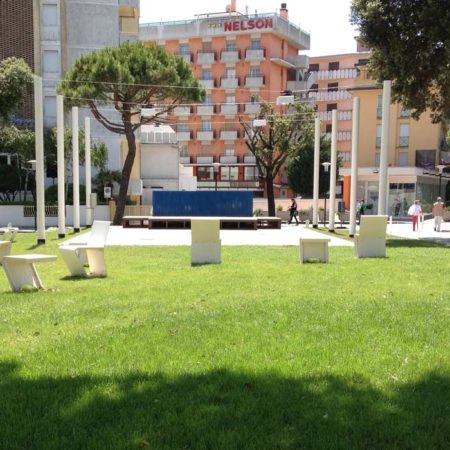 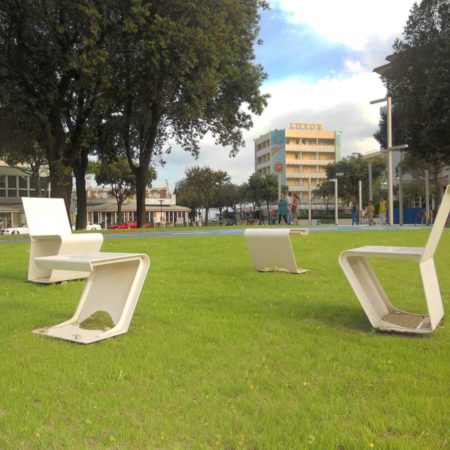 Infrastructure or public space? Roundabout or square? This site, located along the main commercial route of Jesolo, has always been characterized by a prevalence of vehicular spaces, but despite this, it has always been perceived as a public space. The intervention consists in an operation of re-styling with the objective of transforming the functional space of a roundabout, in a real public space, increasing the green area and reducing the driveway space as much as possible. The cycle and footpaths that cross the square and connect Via Dei Mille with Via Verdi, the central square characterized by mild “camber grading” of the land and the chair-sculptures, as well as bicycle rack games characterize this space allowing the pedestrian to stop, play and discuss, in the shadow of the majestic holm oak. “A stage that even further declares that the round driveway is now a real place to cross and to live.” 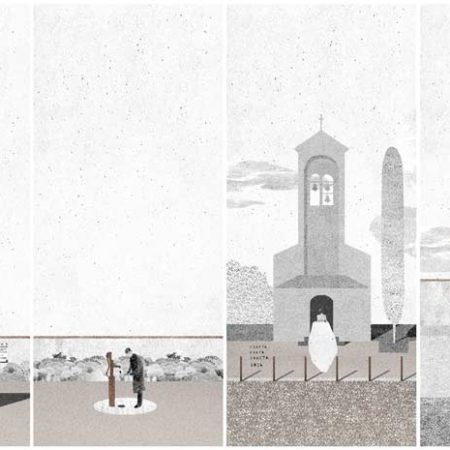 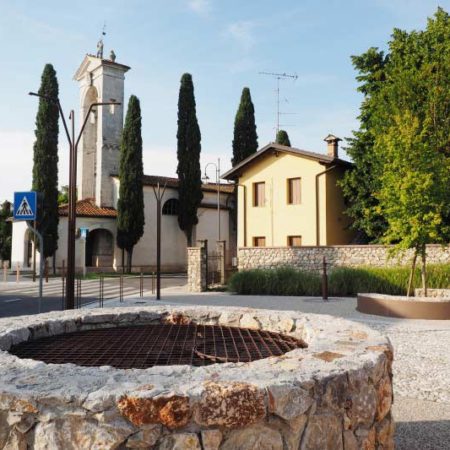 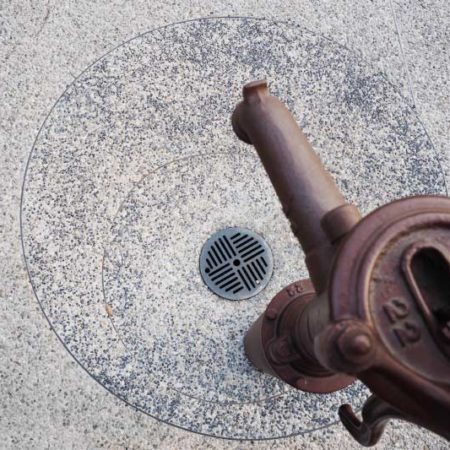 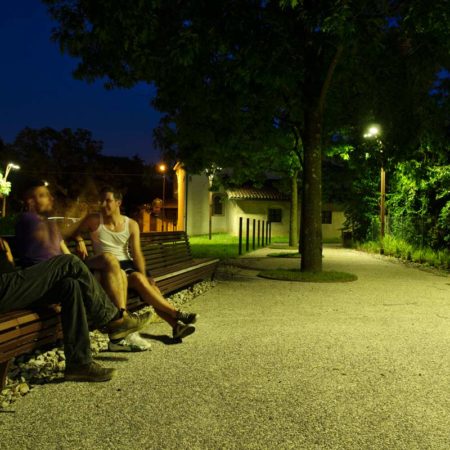 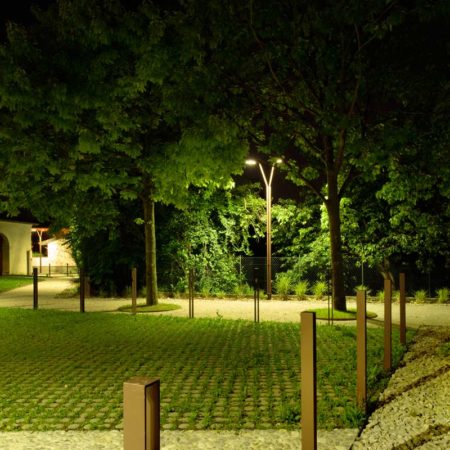 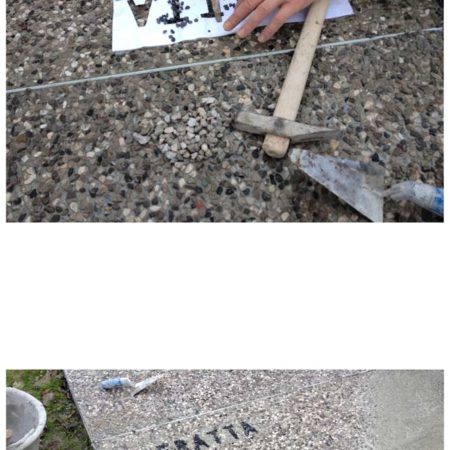 As with almost all the ancient and small towns of the Middle Friuli, the area is placed next to and in close relation with the road SP7 and SP3. These places, which now appear to be generated and “clinging” to the road, with time, have established a strong “dependency” on the passage of the cars, which has determined the public space’s quality. Near the intersection of the two roads there is the only public service (bar) of this small village and the S. Stefano’s church, an ancient church that was built in 1400 and nowadays is the most important monument of the village. The area has not, however, include features to be defined as “urban center” but it seems to be an area generated by the infrastructure. The project idea is reconfigure the space as landmark and meeting place for the inhabitants and for the cyclists that use the nearby bike path. The project involves the construction of a new system of pedestrian paths that connects the different space of the project, the requalification of the square in front of the church, the realization of a garden, the creation of a parking for the cars and the realization of a roundabout at the intersection between the provincial roads SP3 and SP7. 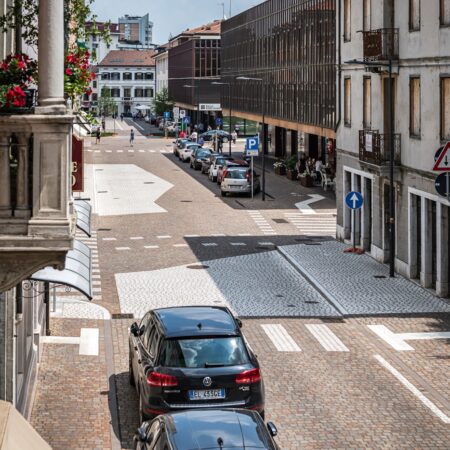