In 2015 Carve and Playpoint won a tender for an adventurous sliding attraction inside the Jewel Changi Airport development, designed by Moshe Safdie Architects. The attraction is located in the Canopy Park on the highest level of the new development, which includes a shopping mall, attraction park and a garden, all in front of Terminal 1. In this canopied park, more than 1400 trees and palms will be housed alongside many other attractions. Creating the ultimate airport experience, and convincing travellers to go through Singapore’s Changi airport instead of others.

In Carve’s original concept, the playground was designed like a sculpture resembling a gemstone; with parts that are carved out – the slides, stairs and rope climbs – revealing the coloured interior of the gem.
In this way the playground presents itself in duality; a gem balancing on the fifth ring of Jewel with a slide attraction hidden inside.

At first the sinuous shell was designed with mirror tiling over the whole structure. During the design process with the client this manifested as a continuous and seamless polished steel skin wrapping around the three cones holding up the large access platform. A shiny jewel in the green forest valley of the park. It is an object that will attract people from afar. The shell, with its liquid mercury form directs and accentuates focus on its surroundings and visitors can experience infinite and surreal reflections of themselves. The rubber patterning on the floor was even designed to create a spiraling abstract reflection in the shell of the playground.

The viewing deck of the playground will be the highest accessible point in the complex, giving a fantastic view of the entire interior of the airport terminal. Naturally this will make the playsculpture a crowdpleaser and social media magnet, but it will also invite and attract children of all ages and families for adventure and play. Going up and down the challenging slides, this “WOW” experience of sliding through the cones and landing at the bottom will make visitors come back time and time again.

The bright yellow inside of the playsculpture contains four slides; A family slide, a steep drop slide and two glass-covered spiral slides coming down from the highest point. The Discovery Slides structure has a complete double curved steel surface. Curved glass was used as balustrades, in the viewing floor, as spiralslide covers and on the double curved lid of the highest cone. Fibre optic lights were integrated in the rubberized floor surrounding the structure, point lights in the highest cone and LED strips on the perimeter of the curved glass balustrade. Air-conditioning was also integrated into the sculpture’s viewing deck to provide a comfortable temperature when children are playing on the slides directly under the buildings roof.

The Discovery Slides playground spans over 18 metres by 16.7 metres in length and stands at 7.5 metres high at the highest point of the platform. Built and produced in three different parts of the world it is indeed a very complex and unique playsculpture. From concept design to realisation, the project took over two years to complete. 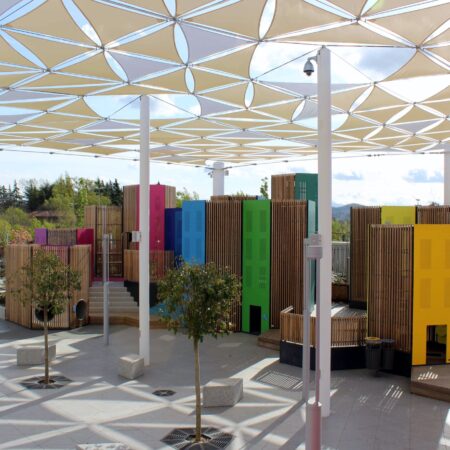 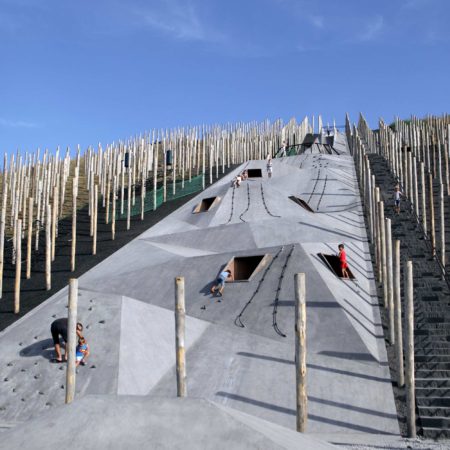