Shortlisted in Residential Parks in 2019:


The Park of Extremes or Teachers’ Boulevard, Yakutsk, Russia by Alphabet City with Novascape

The capital of a vast Sakha republic in the Russian Far East is the city of extremes.

In Yakutsk winters are extremely cold and long with temperatures dropping to -50°C. Short summers are hot and dry with heatwaves of +35°C. The city is surrounded by a mosaic of tundra and steppe vegetation growing on a continuous permafrost layer. While other subarctic cities are shrinking Yakutsk with a population of over 350,000 is a growing city with many young families.


In the summer the contrast between the urban vegetation and nature outside Yaktutsk is painfully striking. The ‘sopkas’ or small rolling hills are covered with pine and larch trees and steppes where the Yakut horses roam. Yet the city is an environment dominated by buildings, bare soil, wrecked paving and marshland vegetation. A subarctic natural environment is very vulnerable to human-driven disturbances. As permafrost is a natural barrier to the downward water movement all water runoff is at a surface level. In the last 50 years poor urban development practices led to the degradation of both natural water runoff and man-made water drainage system resulting in saline bogs dominated by reed grass. This project is the first attempt to create a high quality residential space for the existing neighbourhood in the city centre. 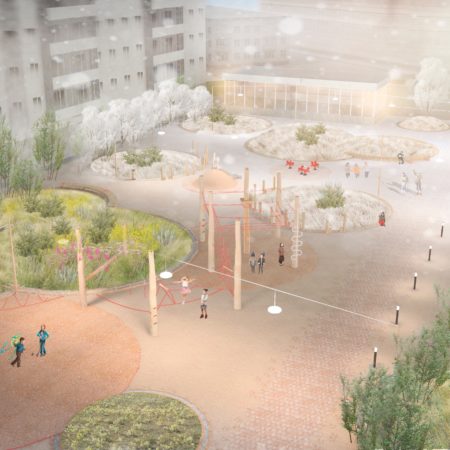 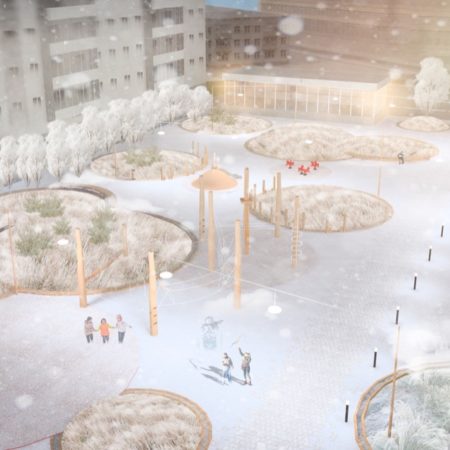 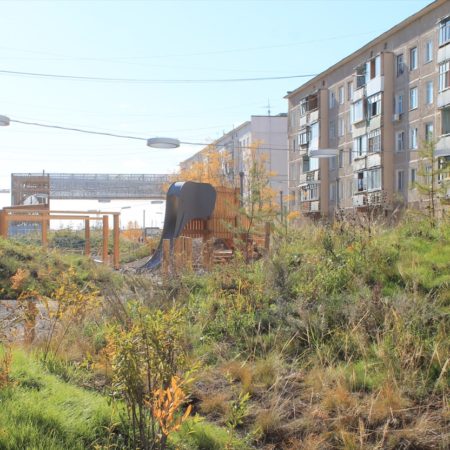 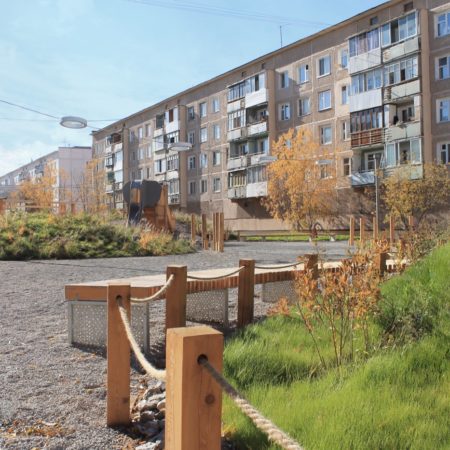 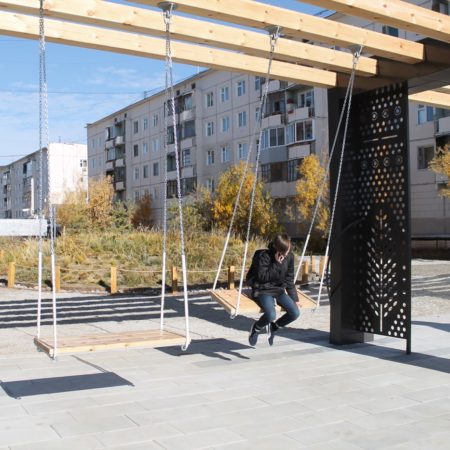 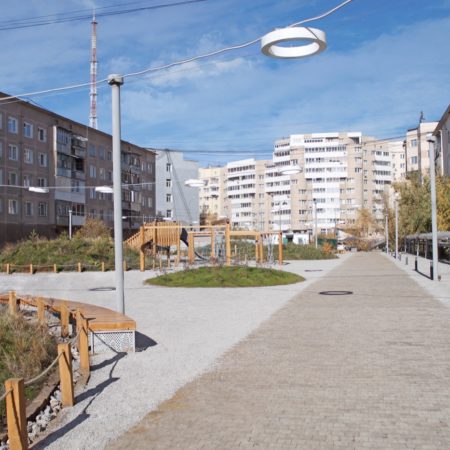 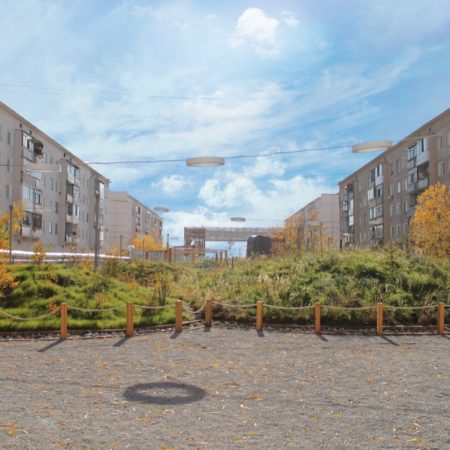 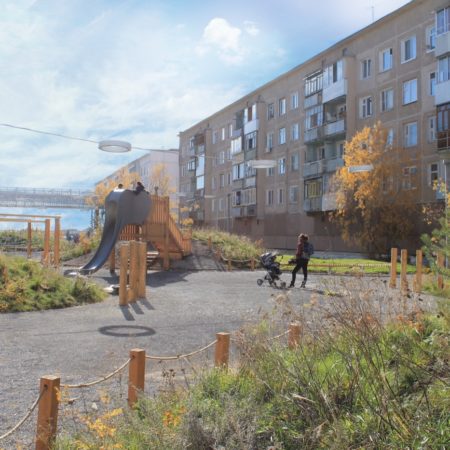 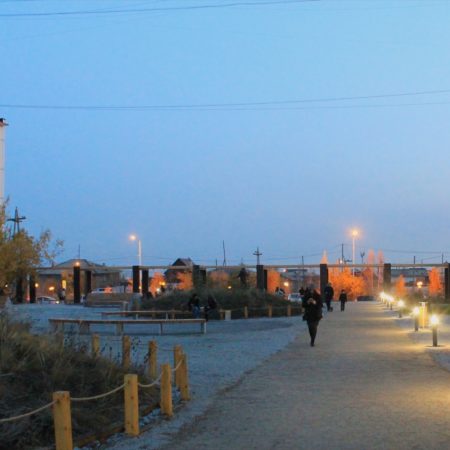 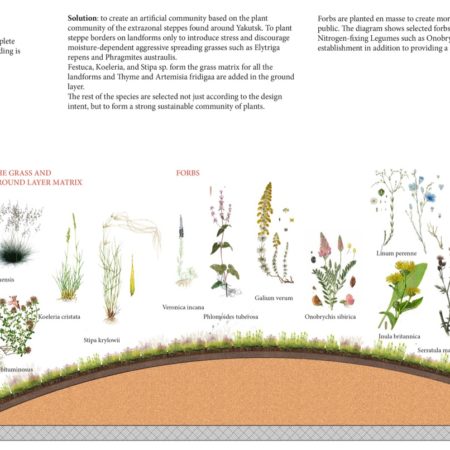 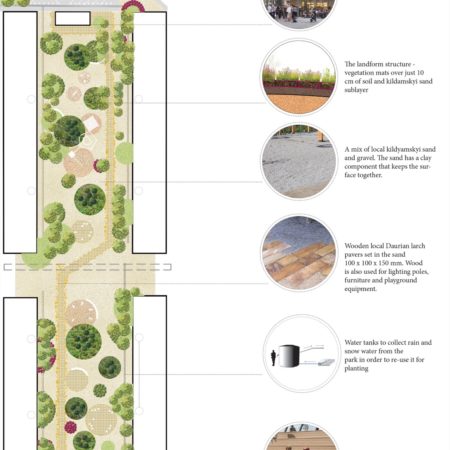 Tucked in between four Soviet residential buildings the new space is designed to both tackle the challenges of extreme climate and bring back the delicate nature of Sakha back to the city residents. The design vision is inspired by the image of a sopka covered with trees and steppe grassland. The new landforms are up to two meters high and create wind protection and warmer microclimate in the cold months and shade in the hot summer months. The landforms create the green sheltered areas with seating areas and a big naturalistic playground. The swings at the end of the park have good views of the lake.

The landforms facilitate better and higher tree growth as the soil is not affected by permafrost. Naturalistic ‘designed’ dry steppe communities are able to compete with water-dependent marshy vegetation such as Phragmites.
The extreme climate and permafrost makes it impossible to apply commonly used hard materials. Tarmac breaks every summer when the permafrost palsas come out and use of any hard-paving leads to high maintenance costs and yet in the city these materials are widely used. We have looked into traditional Yakut materials and existing private local practices and used paving materials that would be easy to maintain and fix. The larch was traditionally used in Russian Siberian cities as a paving material. Here it is combined with coarse grit and local sand to create permeable paving surfaces.

The seasonality of pedestrian movement is reflected in two types of paths. The straight path of larch pavers runs through the park so one can move quickly when it is cold. In the summer more leisurely walks can be taken on a gravel surface. Amenity grass surface typology is not used as the short summer doesn’t allow the grass to be strong enough to allow walking or sitting.

Effective site drainage is essential to avoid permafrost melting and the salinization of the soil. But as the rainfall levels are so low – annual precipitation is just 238mm,- every drop of water is needed to keep the steppe planting lush at the end of the hot summer. Thus we slow down and retain all thaw and rain water under the landforms in a gavel layer. The landforms are made of local sand with a clay content that allows the moisture to go up to the planting. Any extra water that is not absorbed seeps through the thin sand layer that underlays the whole park area to the drainage channels and is then collected in water tanks for future use.
Naturalistic and yet striking planting design is a key principle for the park. Pine, birch and willow trees are used along with massed planting of shrubs including Rosa, Spireae, Crateagus, Sorbaria and Cornus.
A ‘designed’ steppe planting was created using a matrix of grasses and as many forb species as possible. Hopefully over a few years it will be possible to monitor the vegetation development. The salt-tolerant Puccinellia grass and other earlier occurring vegetation at the ground level is unchanged as it is not feasible to change the soil.

As the summers are very short, the construction and planting of the park is phased. More trees and shrubs will be added to the site in the summer of 2019 including the willows along the buildings that were accidentally removed by the contractors.

more by Alphabet City and Novascape