Blyth Road Roof Gardens are part of The Stylus, a residential and commercial scheme in Hayes, West London, which was developed after an initial master planning phase to progressively regenerate derelict industrial land to the west of the town centre. 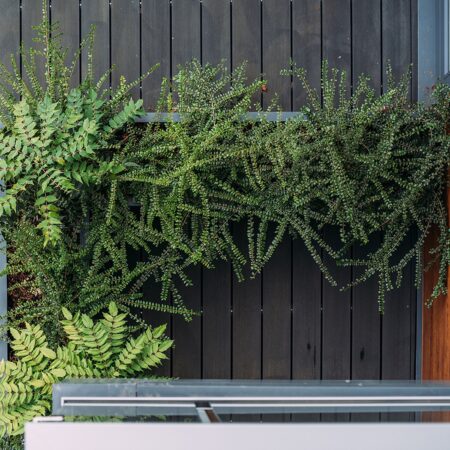 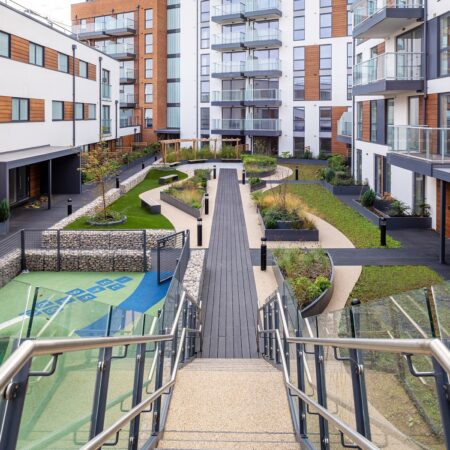 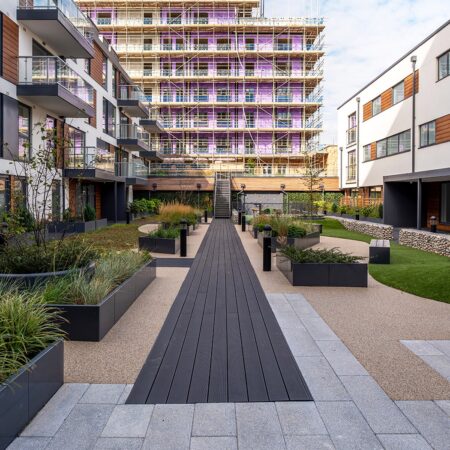 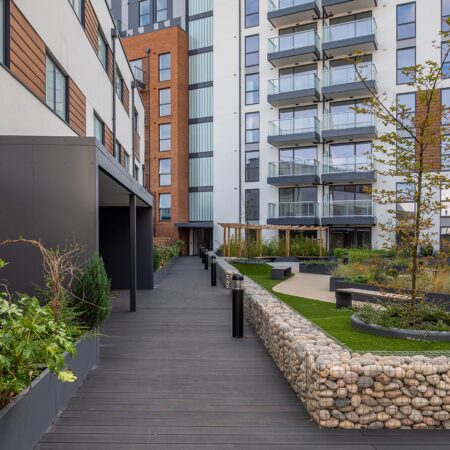 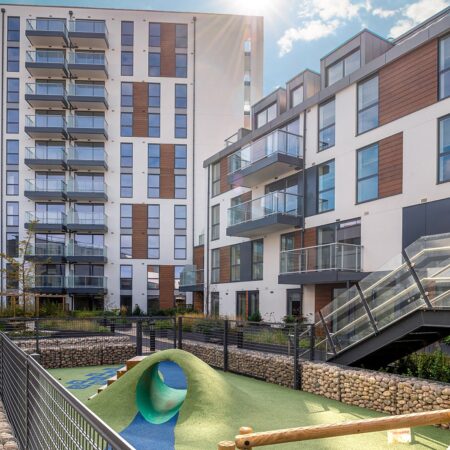 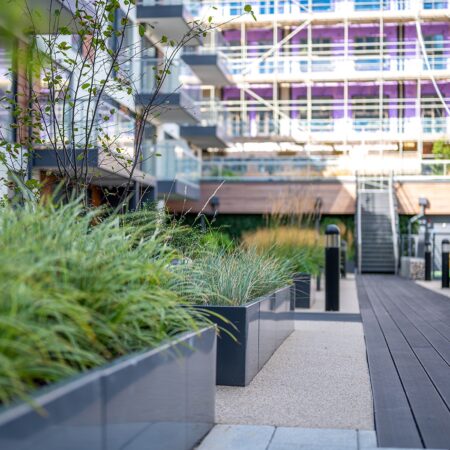 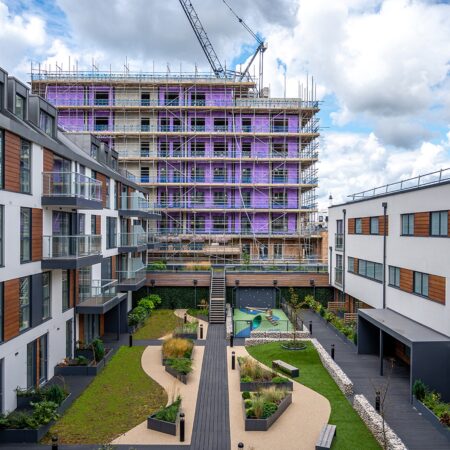 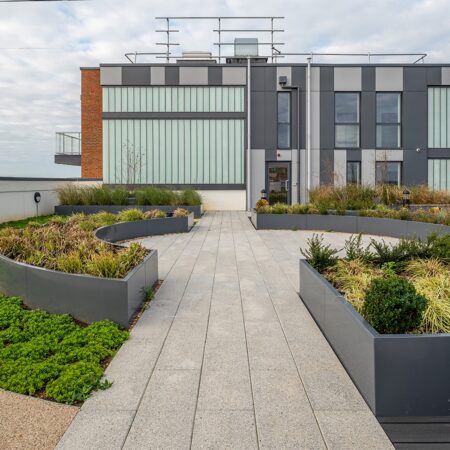 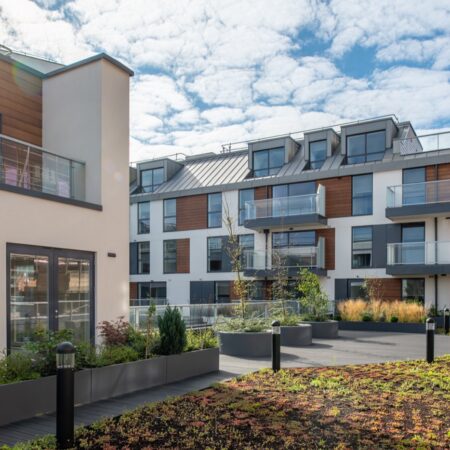 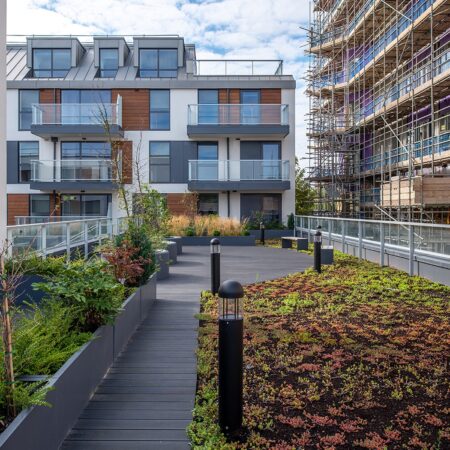 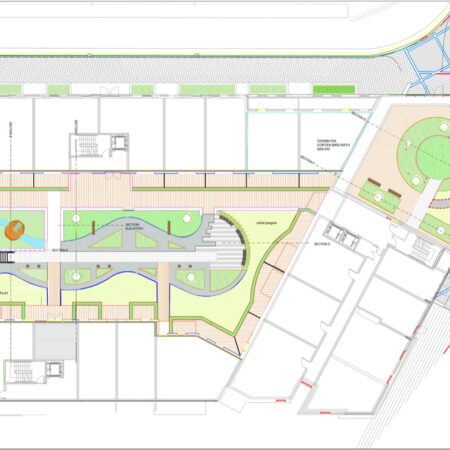 The hugely ambitious project to integrate extensive green space within the building footprint is now one of London’s largest green roof spaces and provides interior gardens for residents on the first, second and ninth floors. The first floor is the largest of the three gardens, being a 1000m² podium garden above the undercroft parking. The site was formerly related to vinyl record pressing and, as a big music fan, we wanted to bring the influence of music and record playing into the design.  Among other musical metaphors, a strong ‘sound’ wave runs through the curving design, integrating raised planters which express themselves individually while looking part of a sinuous collective. The design also breaks up the linearity of the building, although the colours of the planters, ground surfacing and building facade match up.

The space had to look good from above all year-round for residents on their balconies so a strong, attractive design geometry was really important. It also needed to be robust and meet stringent health and safety standards. The design creates semi-private spaces for each ground floor apartment, with raised patio planters creating a sense of privacy and contributing to the overall green fabric of the wider social space. The wider gardens allow for formal and informal space, group and individual seating and also an area for play. It’s like a little pocket park.

As always with roof projects, materials are determined by an array of factors including weight loading capacity, wind lift and permeability. Surfacing materials are a combination of porous bound gravel, composite decking, concrete flags, and mounds made from synthetic grass.

Planting had to be carefully considered. The various building heights created a variety of microclimates and the planting had to meet stringent ecological targets set by the LPA. The planting palette for the often shady edges of the space were limited to fatsia, ilex crenata, mahonia, juniper and small acers with lonicera planted to climb up partition trellises. In the central beds, more grasses were introduced. Helictotrichon, deschampsia, calamagrostis and carex combine with verbena, achillea, euphorbias and anenomes. Golden bamboo provides a big screen under the circular pergola. For the trees, we eventually went for carpinus and amelanchier. We also incorporated bird and bat boxes. A large flowing ban do f sedum and wildflowers provide a rich carpet of diverse species encircling the park and acting as a backdrop for the apartments.

The project programme was hampered by many problems, with the scheme taking several years to complete. The main contractor went into liquidation during the build and the site lay empty for about two years. The project was eventually re- tendered and completion was in February this year with everyone delighted with the results. There is a multitude of space provided in small area for residents who at the same time have a constant sense of green as a backdrop to their living space.