Landezine team recognizes Berlin based landscape architecture and architecture office Topotek 1 as the winner of the LILA 2020 Office Award. The portfolio of Topotek 1 reflects a unique conceptual approach that is dedicated to solving social issues and practicing landscape architecture as a multilayered and creative cultural discipline. Besides their landscape projects, the editors of Landezine acknowledge their exhibition and book Creative Infidelities, which is a playful yet sober reflection on both their own work and landscape architecture as an open-ended design profession. A quote from Jorge Luis Borges featured in the exhibition perfectly illustrates Topotek 1’s approach to the notions of identity, honesty, and context in terms of landscape design: “The original is unfaithful to the translation”.

LILA Office Award 2020 goes to Topotek 1 for their ability to design layered projects and above all for their refreshing and daring colorfulness in conceptual thinking, which the Landezine team would truly wish to see more of in landscape architecture offices around the world.

TOPOTEK 1 is a diverse, lively, and multidisciplinary office composed of a highly qualified international team of architects, landscape architects, and administrative staff. The studio draws upon this wide range of experience during all stages of the design and construction processes, resulting in exceptionally effective design solutions that produce transparent, efficient, and long-term benefits for its clients.

Working at the intersection of the fields of landscape architecture, urbanism, and architecture, TOPOTEK 1 considers itself a traveller that explores the fringe areas of typologies and scales. Each project strives to respond to the given context and programmatic necessities with a compelling concept, extraordinary design quality, and efficient implementation. Some of the studio’s key strategies for maintaining an awareness of and vital link to general contemporary discussions include the hybridization of topics and disciplines; the removal, transmission, and re-imagining of objects and design features from their original context to another; and the design and emplacement of scenographic sequences.

Global movements in society and culture continually redefine a broad spectrum of possibilities in relation to the design and constitution of public space. Driven by its conceptual approach, TOPOTEK 1 considers public spaces to be an expression of visions and of society as a whole. The studio develops design concepts through a critical understanding of extant contemporary realities as well as of cultural and historical references. Through this holistic strategy, TOPOTEK 1 generates solutions that fulfil the modern requirements of variability, communication, and sensuality, creating contemporary spaces for contemporary uses. 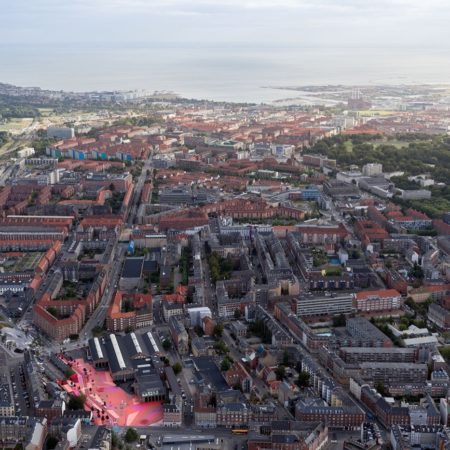 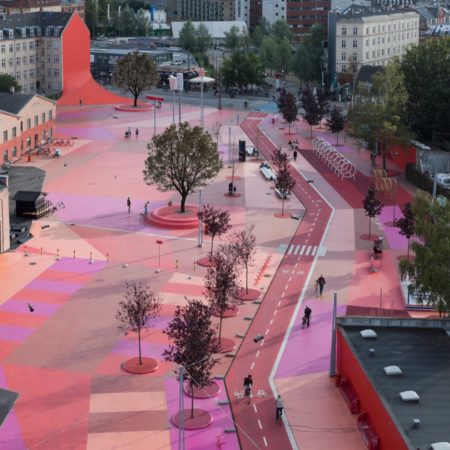 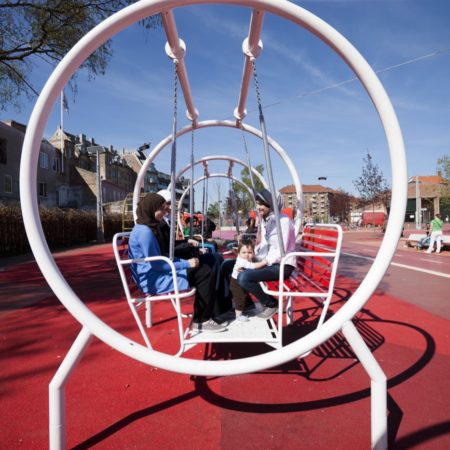 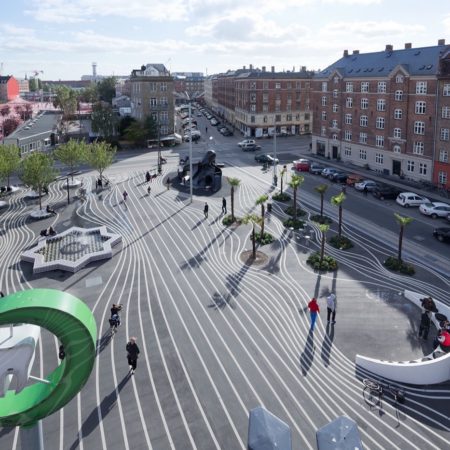 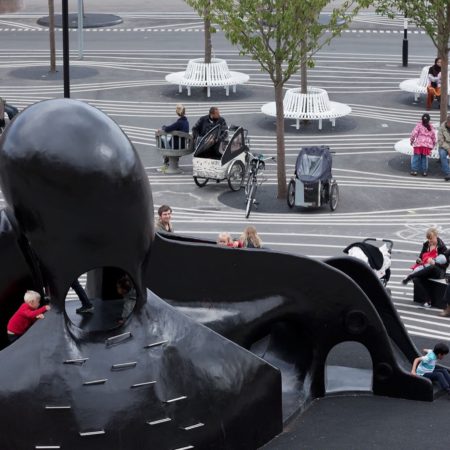 Superkilen was created in the context of a greater urban development project for Copenhagen’s district of Nørrebro which is an ethnically and socially mixed neighbourhood. Frictions and tensions occur due to the differing notions of co-existence, diverse norms of social behaviour, and varied traditions of the residents. The urban development plans needed to take these factors into account. The area consists of a slim strip of land. We subdivided the plot into three spatial sections which were allocated different functions, defined by different colours. There is an activity zone (The Red Square), a meeting point (The Black Market), and a leisure area (The Green Park). When the furniture for these areas needed to be selected we involved the neighbourhood’s residents. In public meetings they were asked to make suggestions. In the end 108 objects and 11 trees from all over the world were chosen. The collection of foreign objects and icons refers to the many cultural identities in Nørrebro. Their arrangement openly displays the immigrants’ conflicting backgrounds while at the same time celebrating their diversity. The realised project has become an expression of a heterogeneous society. 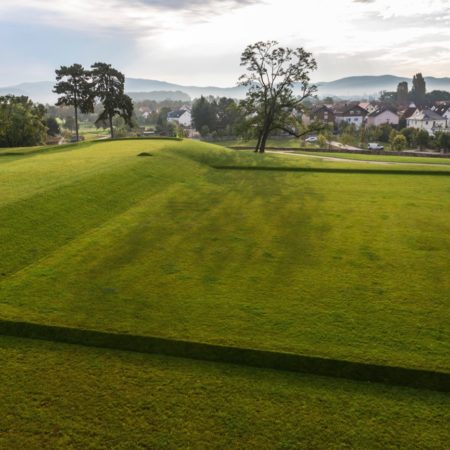 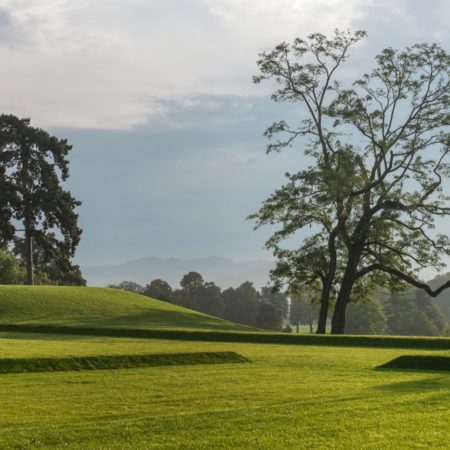 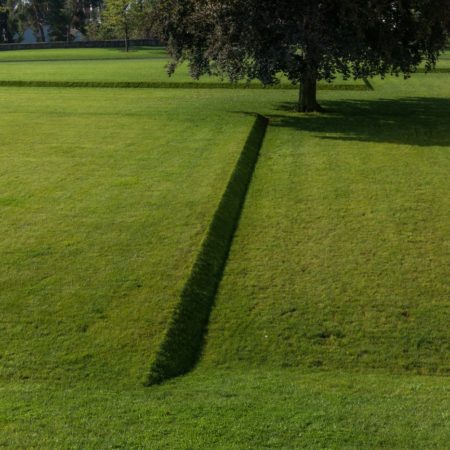 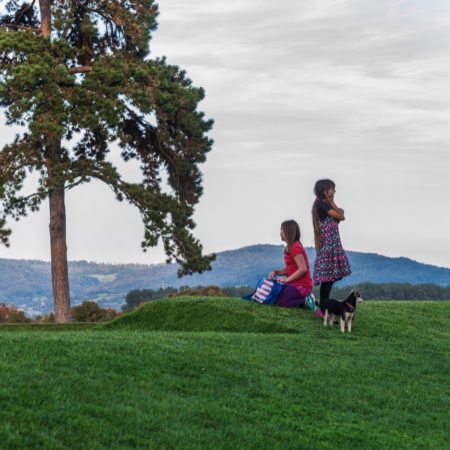 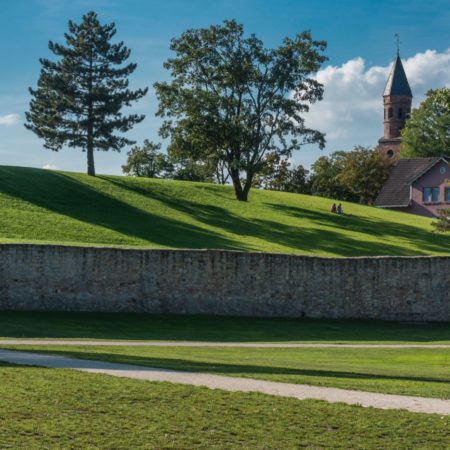 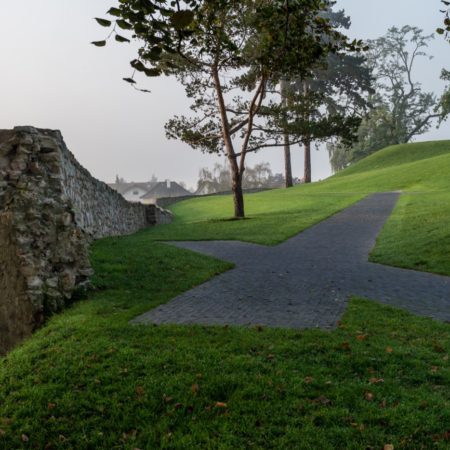 Parts of the area are the fragments of Lorsch Abbey’s complex with the famous Carolingian gate hall, the church ruins as well as the traces of the preceding Altenmünster, which is mainly a large green space with very few remains. In 2009 an interdisciplinary competition aimed at redesigning the area by connecting landscape and architecture while strictly following the regulations of monument preservation. Our central idea was to render history visible as a landscape. Unlike former, often historicising visualisations, our design approach focused on the ground plane. With the help of careful and subtle topographic interventions the spare remains were accentuated. Thus we mainly provided a “stage” for the site to present itself. – The glacial sand dune where the Abbey was built on was remodelled. Lines of sight from the visitors’ different points of view were established as well as new paths and walkways to stroll between the Abbey and the Altenmünster. The footprint of the monastic building structures have been reshaped and covered with a lawn-like protective carpet. With these means we succeeded in making the absence of the ancient monastery felt. The design has resulted in an unobtrusive layout that respects topography, architecture, and archaeological findings at the same time. 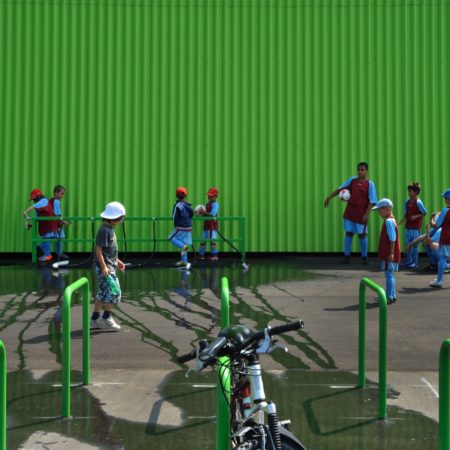 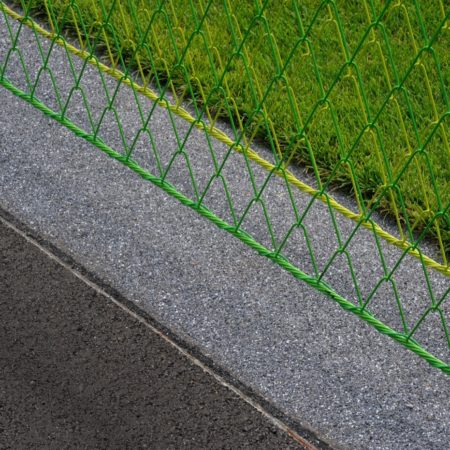 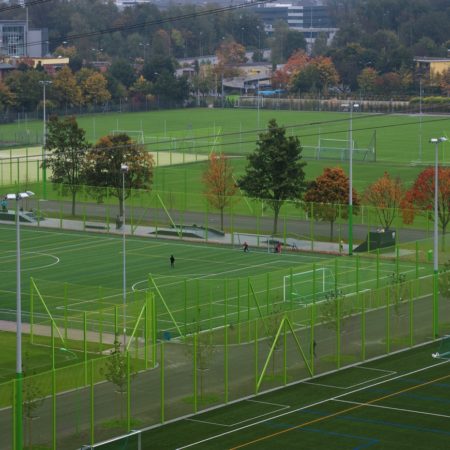 The modernisation of the sports ground Heerenschürli was initiated to meet the concerns of the changing surroundings and to integrate the complex as a neighbourhood park better. Our concern was to point out the ambivalent status of the area: between periphery and agglomeration; between housing and industrial zone; between density and terrains vagues, between traffic and grasslands. We intended to stress the artificiality of the location and blur the boundaries between the natural and the artificial environment. The terrain has been renewed and optimised for thirteen sports fields, sports ground Heerenschürli. The complex also encompasses a skate facility, cycle tracks, and paved walkways to connect the adjacent residential areas to the streets, tram station and grasslands. High ball catching fences enclosing the fields add to this impression as they form volumes alluding to city blocks. Whereas this axial grid stresses the space’s urban quality, its colouring in shades of green – including the surfaces of the architectural facilities implemented by Dürig architects – establishes the connection to its natural environment. Yet, the space’s evergreen character with its synthetic turf is a playful reminder of the thin line between what is natural and artificial, what is grown and human-made. 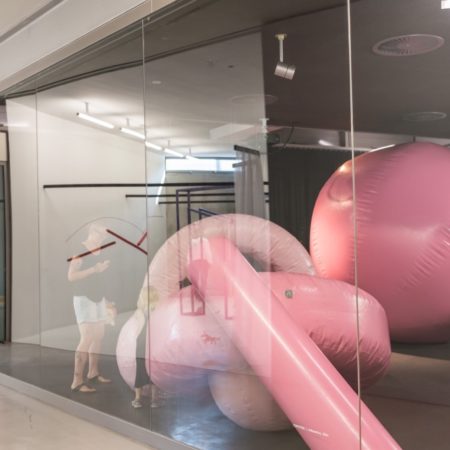 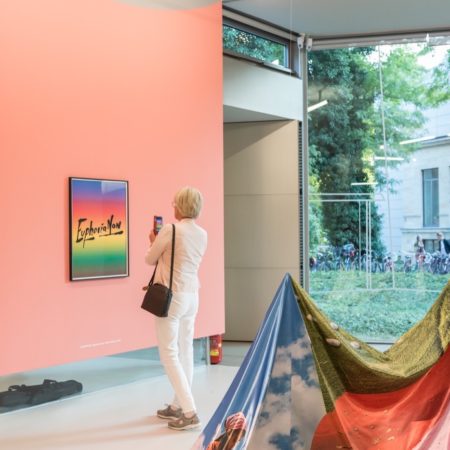 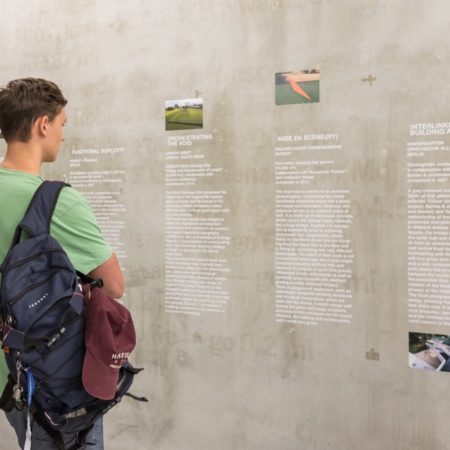 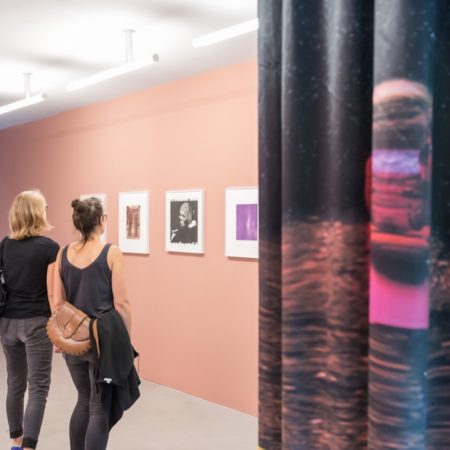 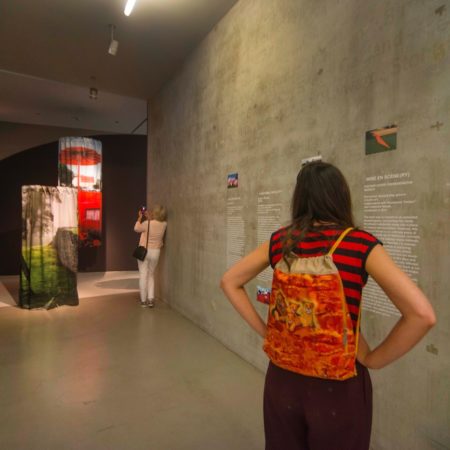 “Creative Infidelities” presents a selection of realisations by the landscape architecture studio Topotek 1. The exhibition title makes reference to Jorge Louis Borges, whose observations on translation and interpretation have had a significant influence on Topotek 1’s approach. Borges understands mistranslations and fragmentary translations as a chance for displacement and regional transpositions: a situation enriching the original rather than diminishing it. Taking inspiration from this very concept, Topotek 1 deals with compositions, forms, and content in an open and liberating manner. The exhibition itself can be seen as a response to Borges as well: Topotek 1’s work has been translated by Oliver Klimpel into a narrative interior landscape. The designer has developed a new immersive installation that is inspired by a selection of Topotek 1 projects – re-contextualising their different localities in new views and surprising combinations. On the 20th anniversary of Topotek 1, the publication of the same name, edited by Barbara Steiner was published by jovis Verlag in 2016. Collaborators from the fields of architecture, art and design, private and public clients, specialist, planners and project managers in addition, all consider the joint projects from different perspectives. 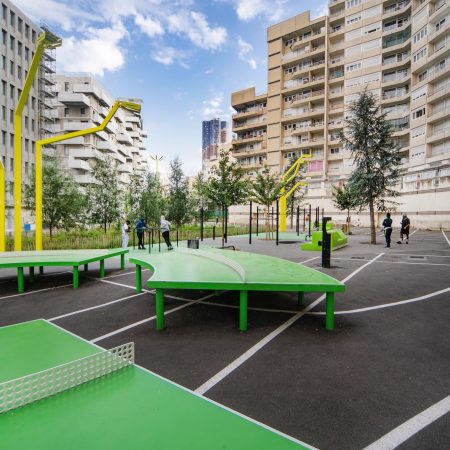