Set in an area of overgrown, historic farmland, the Torparängen project explores the topic of (re-) breaking new grounds and elaborates the concept of rational organization of landscape versus natural processes. By following the central pathway of the park – with one reinforced, ordered side contrasted with an open, mutable edge towards the soil – the path will lead the visitor through several strata of human time scales: from culturally ancient meadows with prehistoric tombs, via pre-modern farmlands to contemporary landscape design. The project thus becomes gesture to observe the representations of landscape as well as the labour of organisation plants and grounds. As such, the design also makes it possible for the natural processes to reclaim the land all over again since the built elements, in stone and concrete, still will be readable and utilized even in such possible, future neglect. The defining idea of the park emerges in the geometrical order that appears gradually towards the north: the grid-planting of the northern side stands out in expressive contrast to the south pathway where trees are planted right on the path, prompting negotiation. 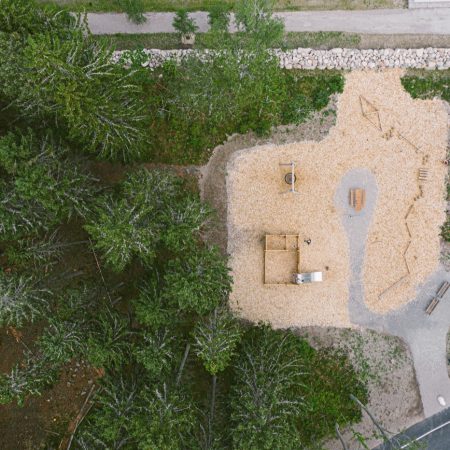 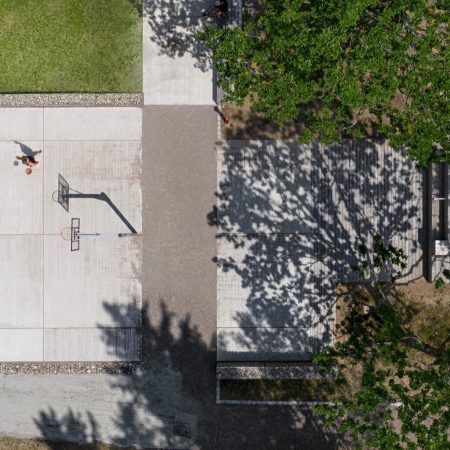 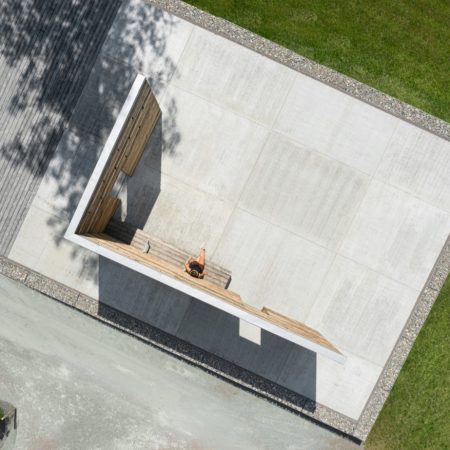 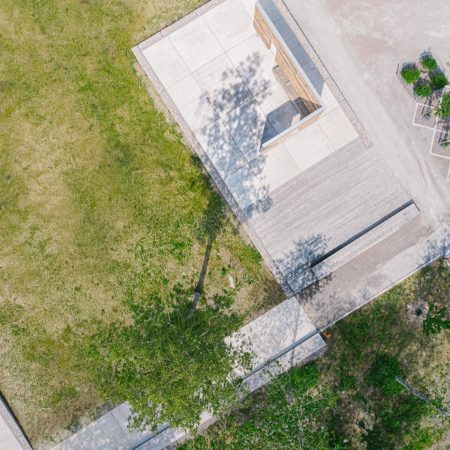 This region in Sweden holds an immense amount of stone in the soil, deeming the historic settlers to heavy labour in creating agriculturally useful grounds, and so, the main geometry of the park is derived from the remains of a 200-meter-long stone wall on the southern perimeter, making the gabions of the parkland readable as a contemporary iteration. The re-created open space was achieved by the cutting of hundreds of forest trees, opening the view to the lake. Our immanent wishes for grand vistas are elaborated both in the layout of the raised platforms that, in the shape of possible parterres, acts as pier-like hubs imaginary connected to the water’s edge. The shape of the two piers is ordered to the matrix of the park – borrowing from the traditional agricultural geometry, a system that re-emerges in all the scales of the park.

The northern platform holds the central pivot of the park – a sheltering corner of a house, a Follie in the shape of a settler’s house yet to be completed or left in the shape of a ruin. This both spatial and pictorial gesture curiously points to the importance of the image throughout garden history. Its construction draws on the traditional lodge houses of the area, while at the same time being curiously abstract – the doorways create possible transitions in space and time and the cuts in the façade makes further associations while opening peepholes to the hidden side.

A circular park in three parts

The main entrance of the park in the southeast introduces the visual code, the ordered geometry of park in the shape of a sunken garden. As the path continues past the monolithic tombs, an outdoor gym and a somewhat odd setting of a one-on-one street basket court introduces the central open space – while appearing almost lost looking, it stresses the irony of contemporary investment in body work and labour at the same time makes manifest the democratic and recreational use of a contemporary park.

In contrast with the geometry of main park, the most northern area consists of an inward-looking layout of community gardens. Here the cultivation of soil is being done again, by real labor and with the investment of individuals with the focus on creating outcome in the form of edible foodstuff. The well is, in an historical debt, placed at the center of the paths and the reminiscence of renaissance gardens reminds us of possible historical events in this site.

The most southern part of the park holds memorials of the forementioned, prehistoric tombs, gently included in the meadows and paths of the larger framework of the park. These remains provide an understanding the cultivation of the land in this area over thousands of years and becomes the backdrop for the park: a circular process of labour on the land, culminating in the grand Frankfurter swings towards the lake, again brining back play and reflection to the park experience.