Delivering the long-term regeneration of the London 2012 Olympic site post-games involved transforming the Park from a major sporting venue to a new permanent public park and an appropriate setting for the legacy developments. The creation of a hub building and play space in the North Park was identified as a central part of the transformation, providing a new community facility and associated play space, and forming part of the network of new pedestrian and cycle connections between the Queen Elizabeth II Olympic Park and surrounding communities which had been previously fragmented and unconnected. Before work began the site was a large area of flat tarmac, one of the Games concourses opposite the Basketball Stadium, located between the former Athlete’s Village and the Velodrome and bordering the River Lea wetland basin. It required extensive physical and ecological enhancement to become a space of high physical and environmental quality. It also serves as main utilities corridor for the park making design of the space a significant challenge.

The concept was inspired by the shapes and forms of an unfurling leaf, with long organic forms that complement the existing layout of the Olympic Park design. The local ecological heritage informed the key theme of ecological succession. The new play landscape contains a series of character areas, which tell plant life-cycle stories and have distinct soft and hard material palettes to enhance the sensory and experiential qualities of these spaces for children of all ages and abilities In the pioneer hazel copses and birch pioneer woodland, children can explore willow seed pod dens, hunt for bugs and get their hands dirty. Species have been chosen to represent those that first colonise a new or neglected landscape. The sand and water play area was inspired by the history of the River Lea and its industrial past. It allows children to become water engineers – encouraging them to work in groups and pump sufficient water to dam and divert water through the natural rock pools, rivulets and industrial channels, creating a series of splash pools and sand traps along the way. Finally, the Scots pine and oak climax pine forest, represent the species that will establish in a landscape over time if it is undisturbed. Erect’s bespoke nest-like climbing structures invite high physical activity and offer expansive views of the wider park for those brave enough to accept the challenge. The fluid landform and swathes of draped planting ensure that the topography blends seamlessly into the wider parkland. Permeable boundaries on three sides encourage children to continue to play beyond the designated play space.

During the design process the play layer was developed from the child’s perspective, designing experiences rather than just placing equipment. It was crucial to design a space that was inclusive and provided an abundance of play value for every visitor, regardless of age or ability. The experiential qualities were considered right from the beginning, using analytical diagrams and drawings. Sketches explored the concept ideas and consider details of texture, structure and form through hard and soft detail. Models were used to calculate topography and as a tool for communicating with the client as well as a reference for the contractor during construction. Modern methods of construction like off-site manufacturing were used, but complemented with artistry and craftsmanship to realise a design that is original and engaging and ensures that concepts for imaginative bespoke play elements did not get lost or diluted. The beautifully sculptural poured concrete was created using a range of aggregates and made unique using techniques such as imprinting nails and creating grooves and channels to reflect the industrial history of the River Lea and its catchment area. Planting was carefully selected to enhance the distinct nature of the various character areas and offer year round interest for visitors. Some more unusual species for a playground were selected, such as gorse and fox glove species to allow children to have interaction with these more risky plants and be aware of them, just as they would if they were playing in the UK countryside that these character areas were inspired by.

As one of the first legacy projects, the scheme design needed to build upon the success of the sustainable sports venues built for the Games. Creative use of existing on-site materials from the Games’ demolition was used effectively, with concrete rubble used to fill gabion baskets and create landforms, and 70% of the playground scheme utilising left over plant stock, to help reduce the project’s carbon footprint. Overall, the project successfully achieves the LLDC’s vision for the legacy of the Olympic Park by achieving environmental innovation and making sustainability a commercial success, whilst also delivering high-quality neighbourhood play space to support both existing and future local communities. 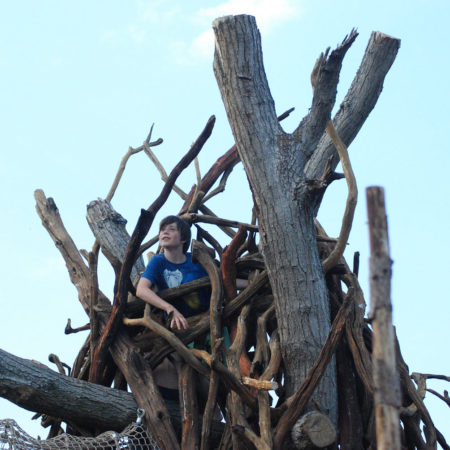 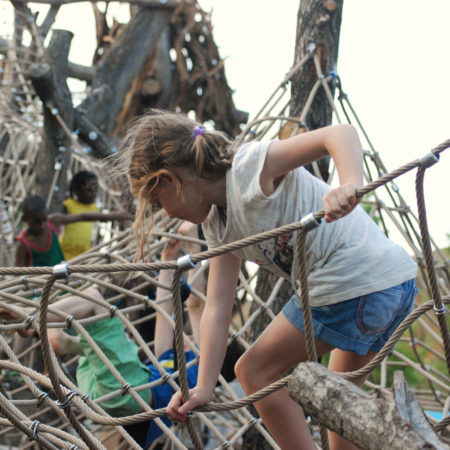 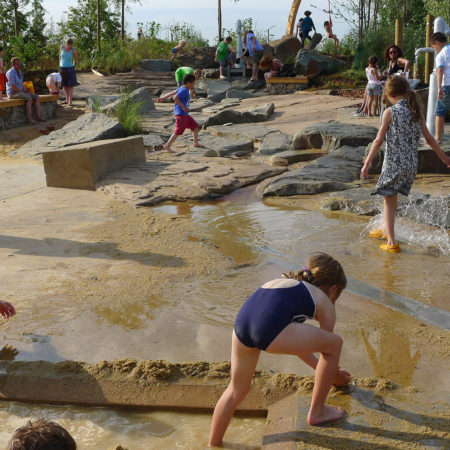 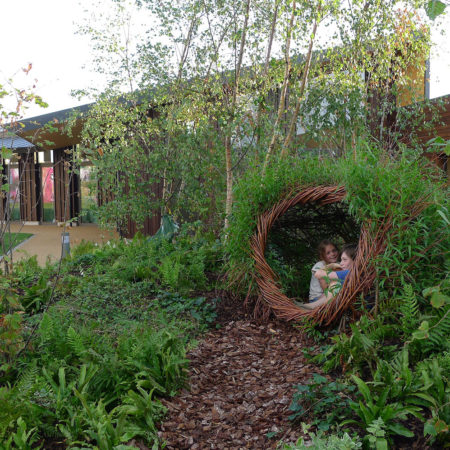 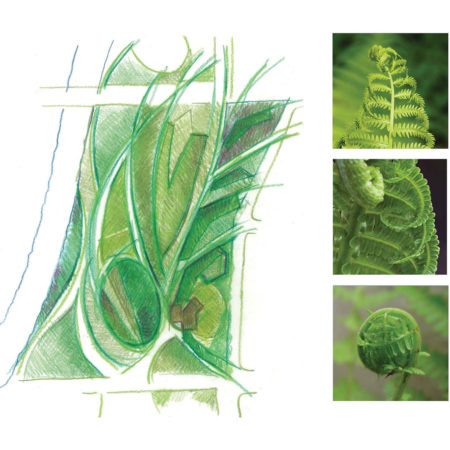 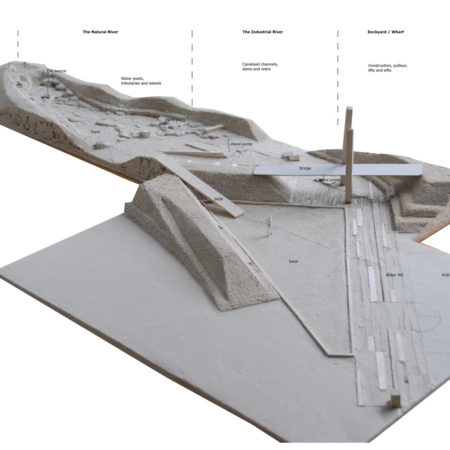 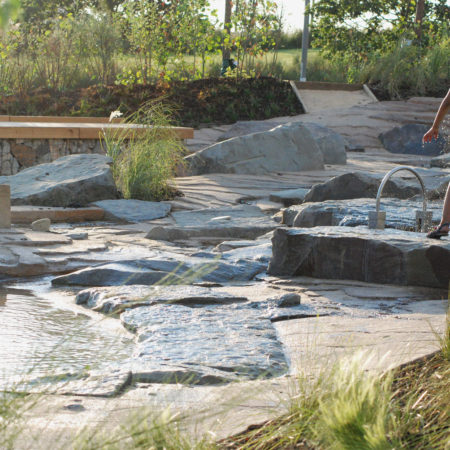 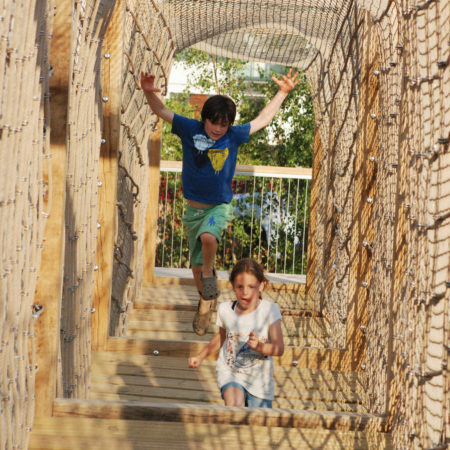 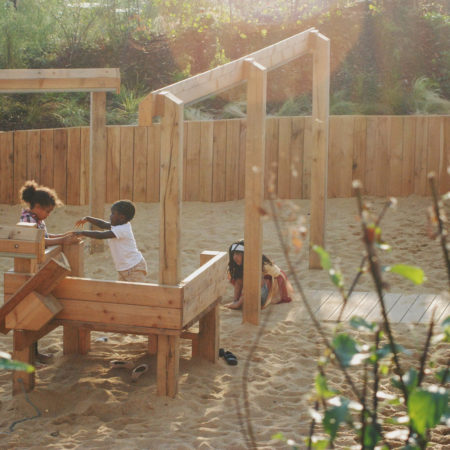 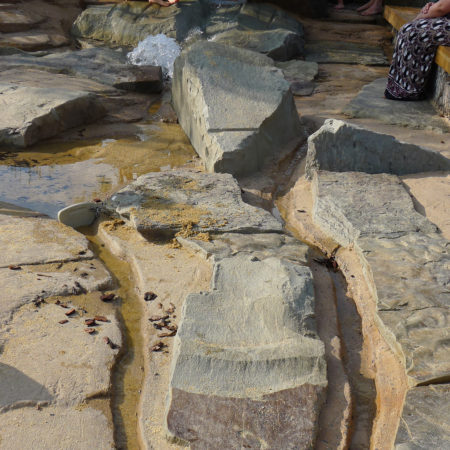 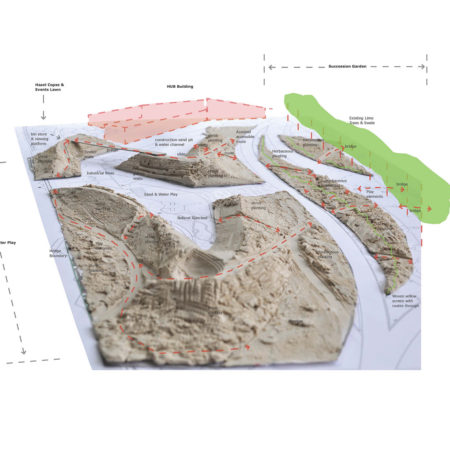 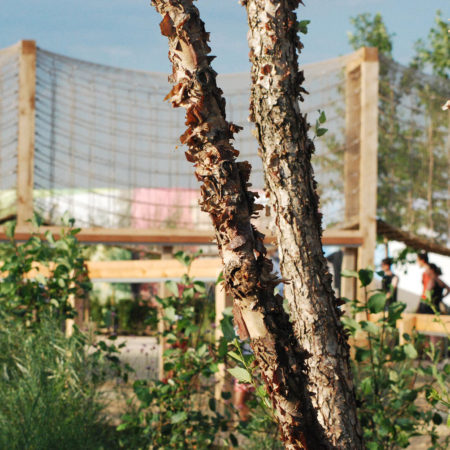 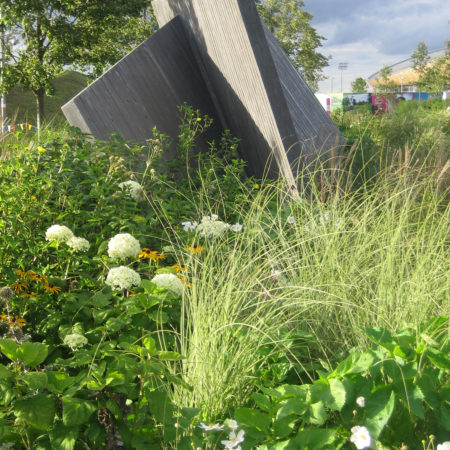 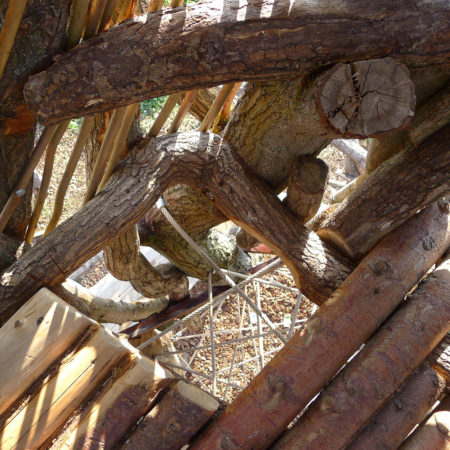 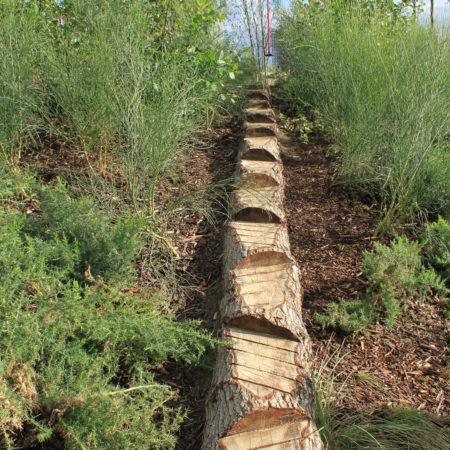 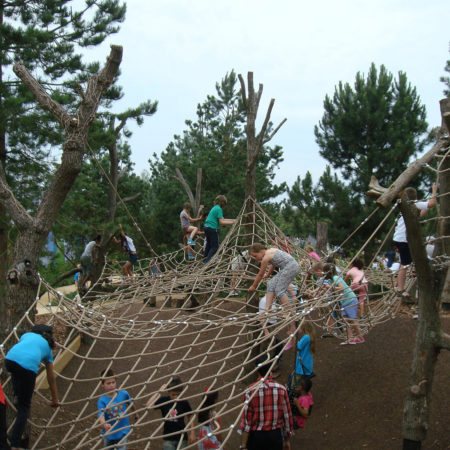 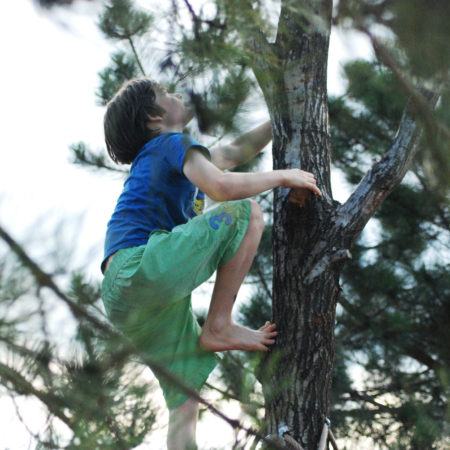 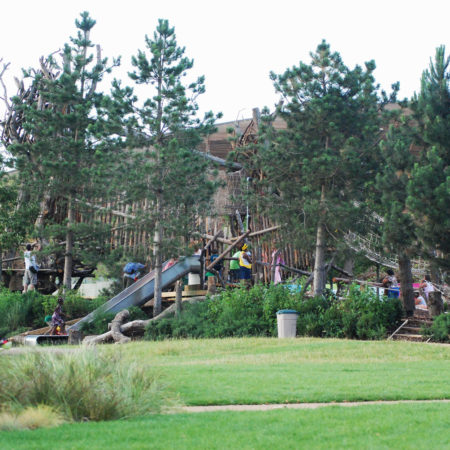 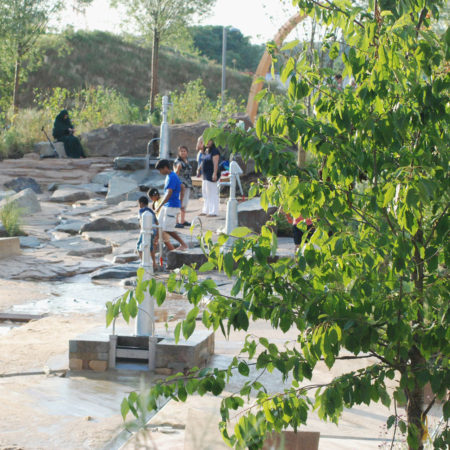 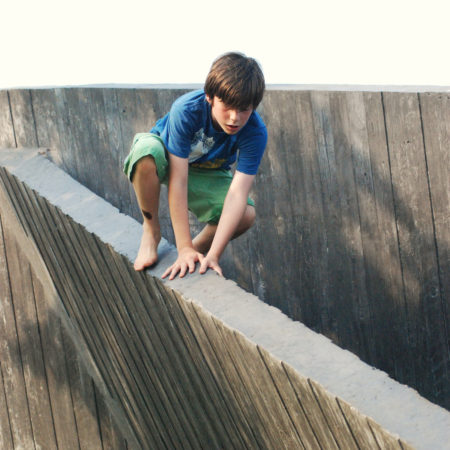 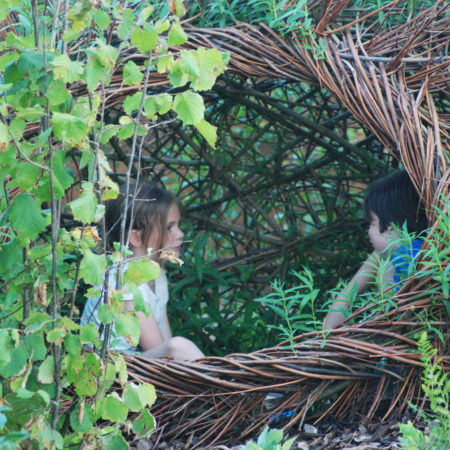 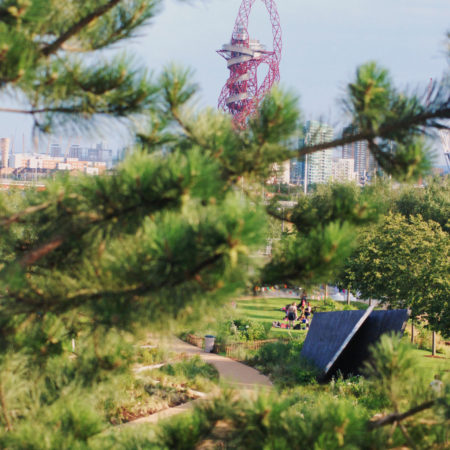 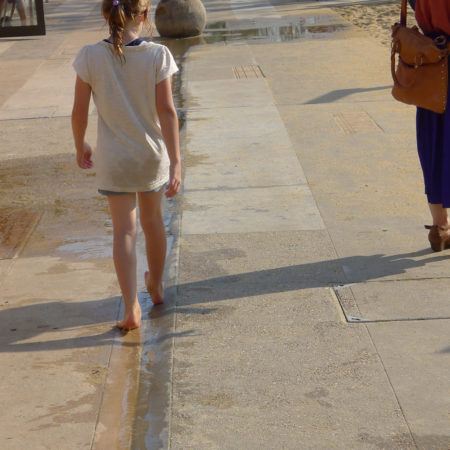 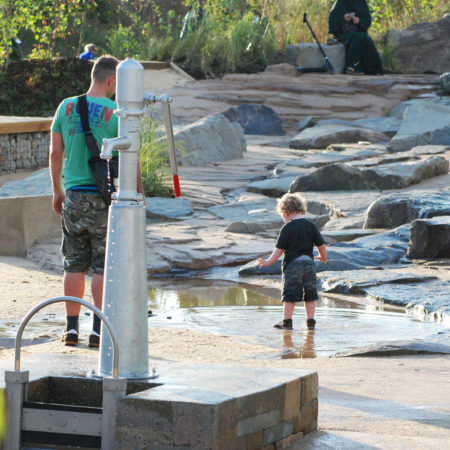 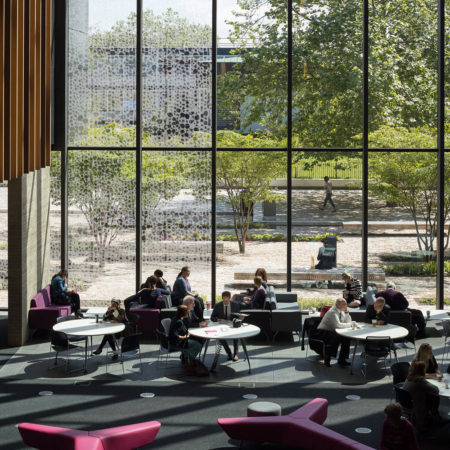