The State Department, recognizing the need for a new embassy campus in London, envisioned a facility which would serve as a symbol of the Special Relationship between the United States and the United Kingdom. The design needed to fuse the U.S. government’s competing goals for sustainability, security, accessibility, and aesthetic beauty. It also aspired to set a new paradigm in embassy design representing the ideals of the American government—contributing to the local public realm, prioritizing transparency and openness, and drawing on the best of American landscape architecture, architecture, engineering, culture, and technology. The challenge inherent to this charge was to resolve what the embassy aspired to be with what present realities dictate to meet the facility’s security standards.

Understanding that the new Embassy’s role and function extended well beyond its boundaries, catalyzing and supporting the transformation of the formerly industrial Nine Elms district of London, the design team explored the convergence of pedestrian circulation leading to and through the site. The team proposed pedestrian paths across Vauxhall Bridge and along the South Bank of the River Thames, following existing roadways and connecting to nearby existing and proposed Tube stations. An inward spiraling form emerged when these paths met at the embassy site. As a circulation strategy, the spiral orients visitors implies directionality of movement and creates views as one moves around and through the site. These fluid gestures begin in the public realm and continue upward within the building through interior gardens. 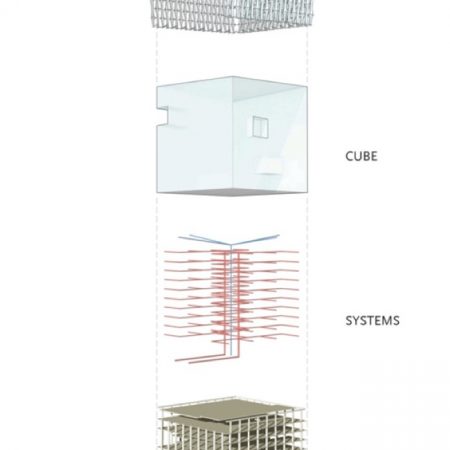 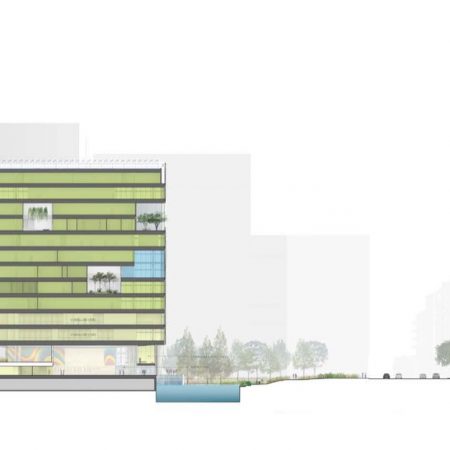 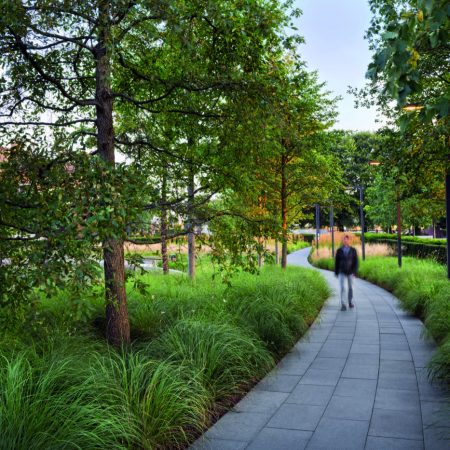 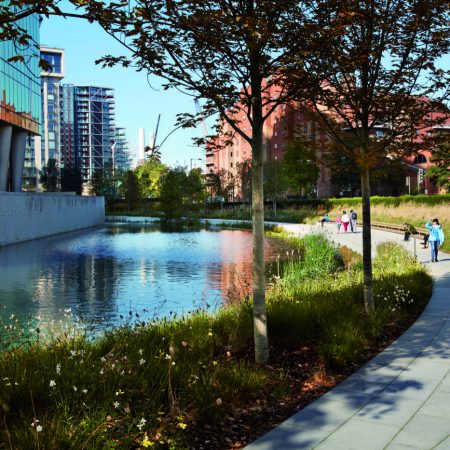 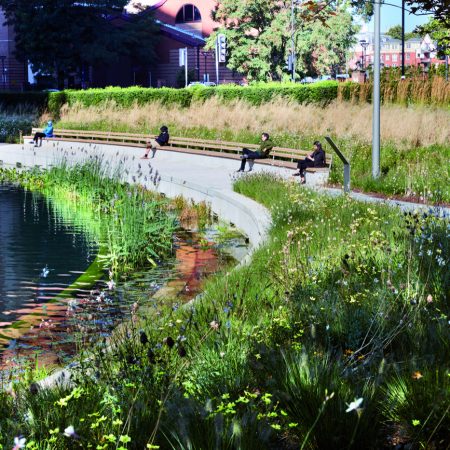 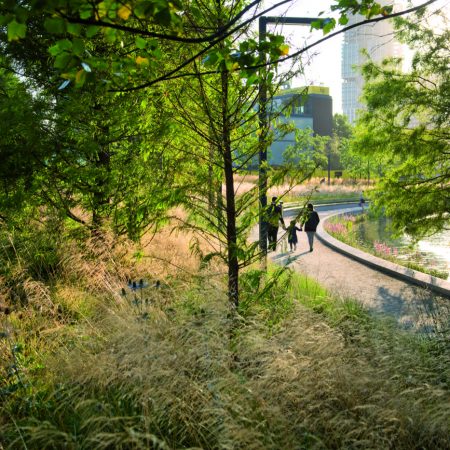 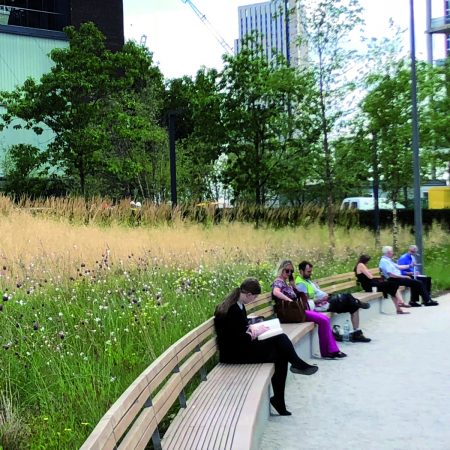 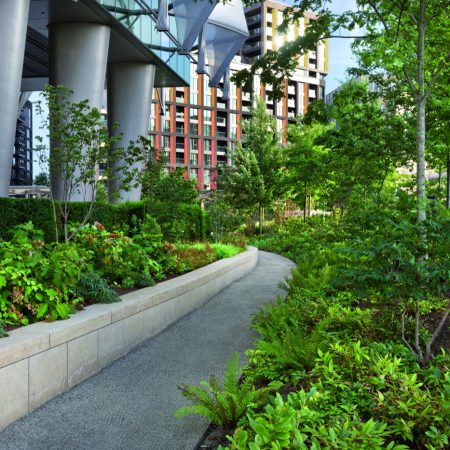 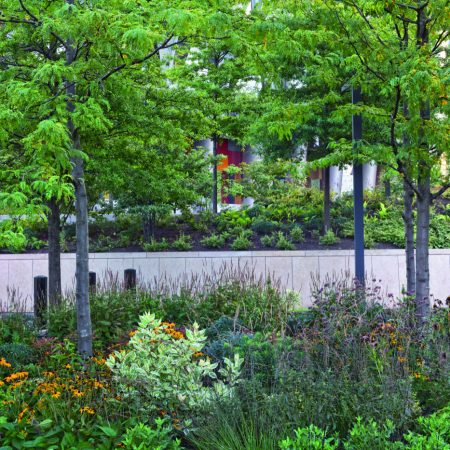 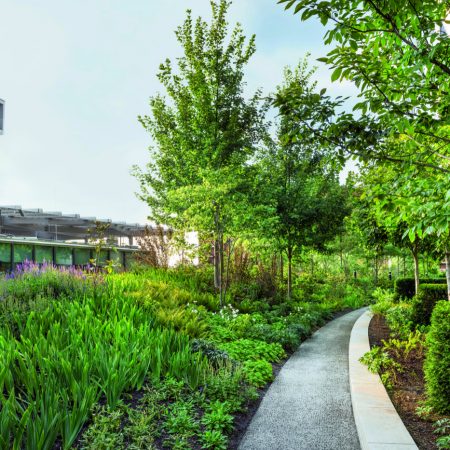 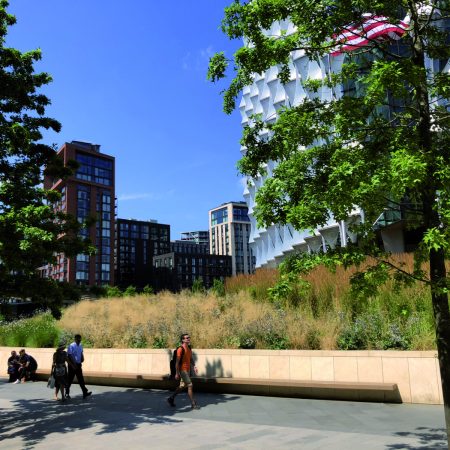 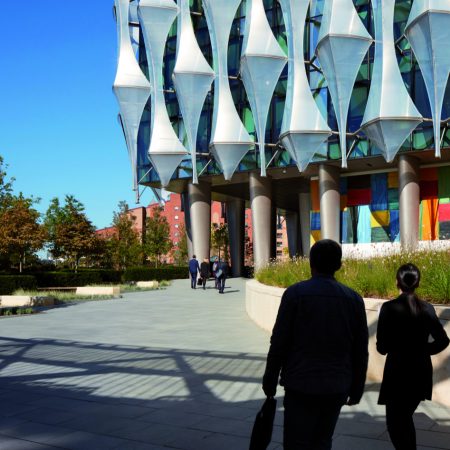 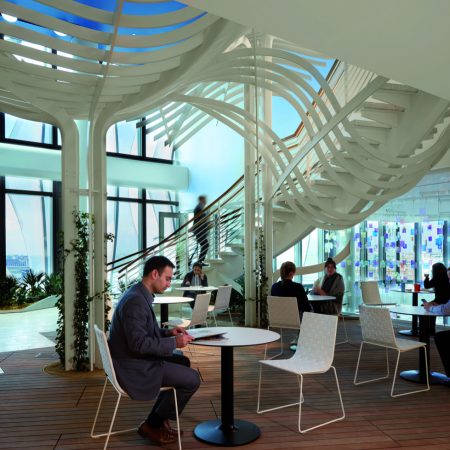 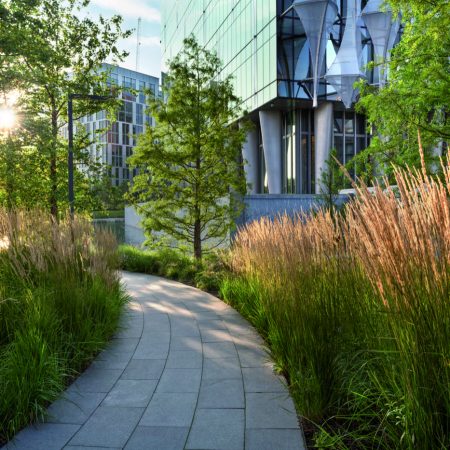 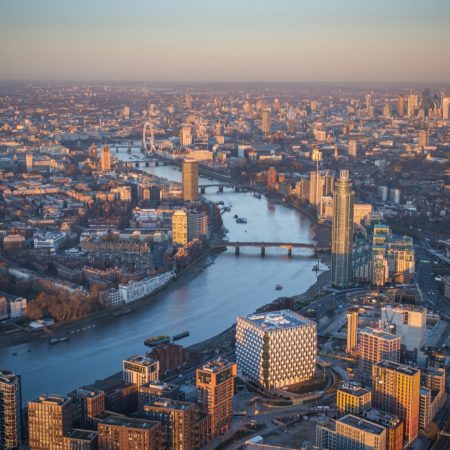 A generous civic plaza and park greet visitors upon their arrival—a stark contrast to the foreboding walls, gates, and guarded entrances typical of highly secure buildings. Cantilevered wood benches are built into low, retaining walls, giving seating for the adjacent plaza and discreetly masking the walls’ function as a critical outer security layer. The northern portion of the 4.9-acre site is devoted to a publicly accessible park, welcoming the neighborhood to lushly planted gardens, walkways, and pond. Before the Embassy, the area’s industrial landscape lacked the green space that makes communities livable. Only two percent of the Embassy’s site area supported vegetation. Post-development, the site area is 49% vegetation.

The Three major landscape typologies, the Pond, the Meadow, and the Woodland, constitute the main elements around which circulation and functional spaces flow. The Pond is excavated within the northern portion of the site, extending along the entire north facade of the Embassy, setting up a significant view from Nine Elms Lane to the building. This water element reflects the English park tradition of ponds and lakes reminiscent of the Serpentine at Hyde Park. The Pond landscape represents wetland and riparian landscapes found throughout Britain and the U.S. The Pond is also a crucial piece of resilience infrastructure, capturing, cleansing, and reuses site stormwater for irrigation, enabling the grounds to be maintained without potable water and contributing to the Embassy’s LEED Platinum certification.

Planted with grasses, the Meadow mound evokes the sense of expansion characteristic of the gently sloping American plains and prairies and restores a historic landscape type of both the U.S. and Britain utilizing 100% native plants that provides essential habitat for many bird and insect species. The Pond and the Meadow are the two key elements that allow wide-open views of the embassy site while imperceptibly integrating the required security measures into the landscape. The partner to the Meadow is the Woodland, planted with species typical of American and British forests. The Woodland provides seasonally intriguing plantings while simultaneously screening service portions of the site.

Inside the embassy building, the landscape continues to the upper floors. One discovers six aerial gardens: one reserved for the ambassador and their guests and the others designed to serve the Embassy’s staff. Each aerial garden’s landscape was chosen for its capacity to thrive in specific orientations, representation of the diversity of the American landscape, and appropriateness of each type to its use.

Like the intertwining of a handshake, a symbol of diplomacy, our countries are stronger together. Likewise, the embassy and its environment are designed in beneficial and supporting relationships to each other through an intertwining of forms and functions, movement and expression. 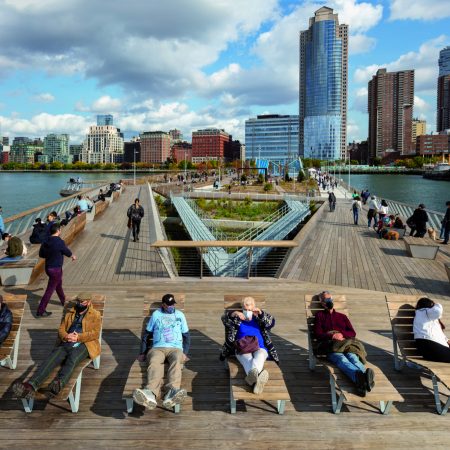 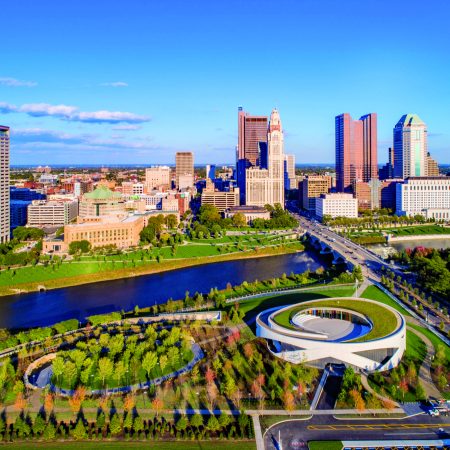