With its prime location in the dense urban core, surrounded by several of the busiest streets of Bangkok, Ashton Chula-Silom sees an imminent challenge of providing its inhabitants with a truly livable environment. As vertical living continues to pierce into the sky, the city becomes more fragmented, and its dwellers lose their connection not only to the neighborhoods and people around them but also to nature.

The project envisions an opportunity to re-link this connection while promoting a better living environment. By maximizing green areas, drawing an inviting pedestrian passage, and providing a semi-public garden at the front yard, the landscape helps to blur the sharp line of this exclusiveness, thus contributing to the greening effort of the nearby streets and footpaths. The close collaboration with the architects and engineers has also fostered a creative integration of landscape and architecture. The man-made “Green Mountain” wrapping the low-rise car park building is one of the essential features in response to the growing issues of urban heat island, glare effect, and increasing urban runoffs.

Ashton Chula-Silom is a high-end residential project located on Rama 4 Road. It strategically placed itself right in the center of Bangkok’s most bustling urban districts – the prestigious Chulalongkorn University Campus, Samyan, and Silom. These districts have rapidly developed into dense urban quarters and have been extremely populous for many decades. One can find all they need to strive within these districts, be it groceries, food, educational facilities, or leisure and entertainment complexes. The site also benefits from its proximity to two public train stations and walkable footpaths to nearby destinations.

However, living in such a convenient and dynamic location comes with a high price, environmentally. Rama 4 Road is considered one of the major arteries of Bangkok that accommodates a significant amount of traffic every night and day. An overpass above Samyan intersection, which extends past the project’s doorstep, concretizes the visual blockage and adds more noise pollution. The dense urban fabric also means limited open spaces and ventilation. All of these issues affect both the project’s inhabitants and other commuters in public. Well-aware of the challenges, the landscape team came up with a simple yet effective holistic greening approach. As a result, the landscape becomes an integral part of the design that could enliven this urban habitat again.

The final design consists of three key landscape components; the Entry Garden, the Urban Mountain, and the Rooftop Multi-leveled Pool and Observation Deck. 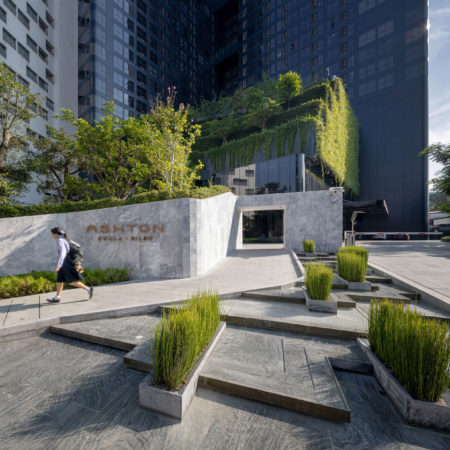 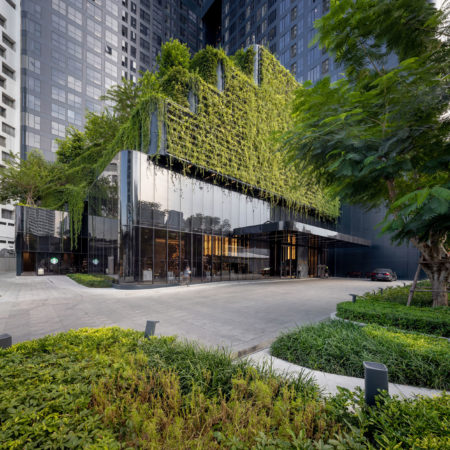 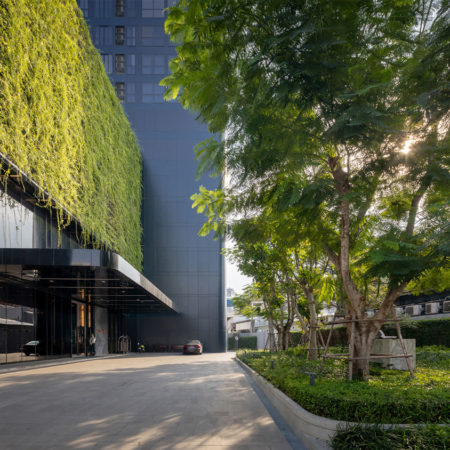 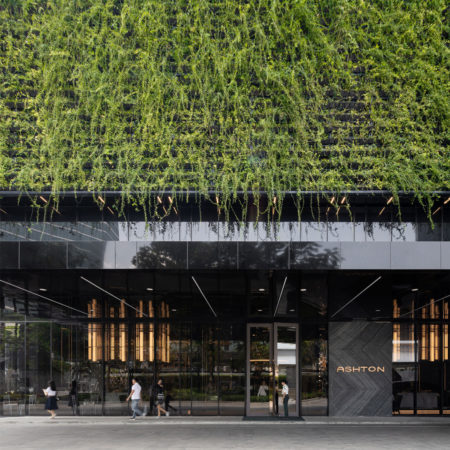 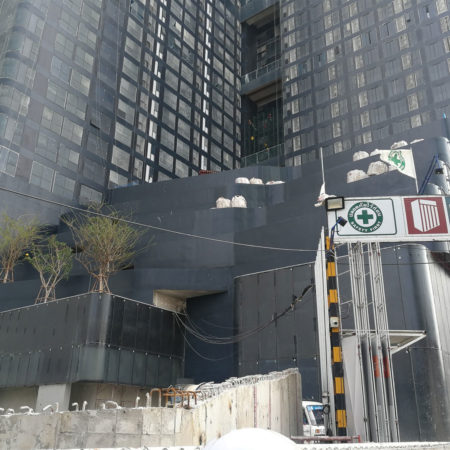 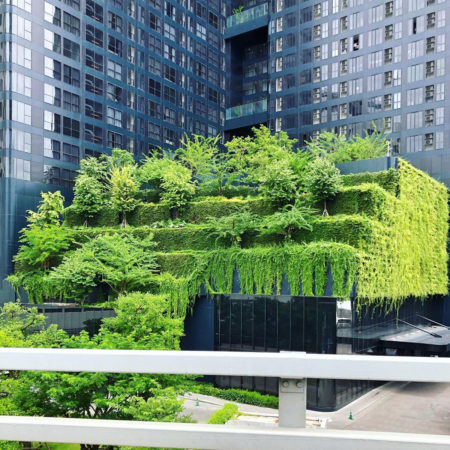 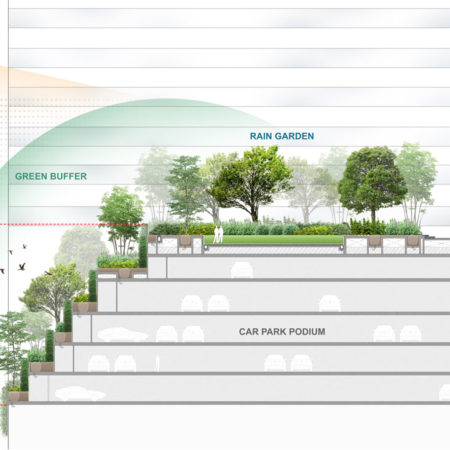 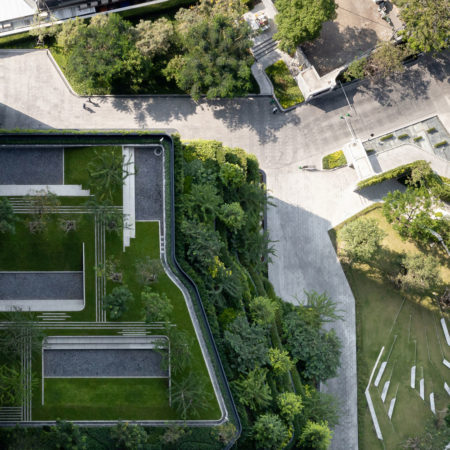 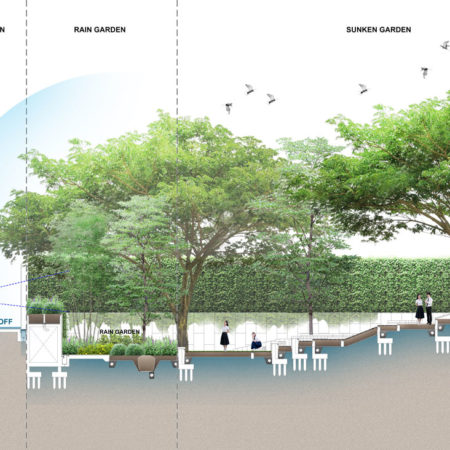 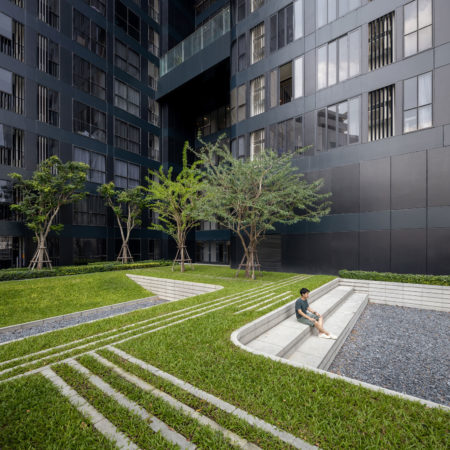 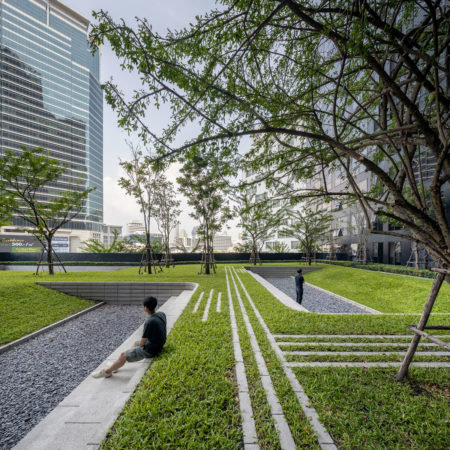 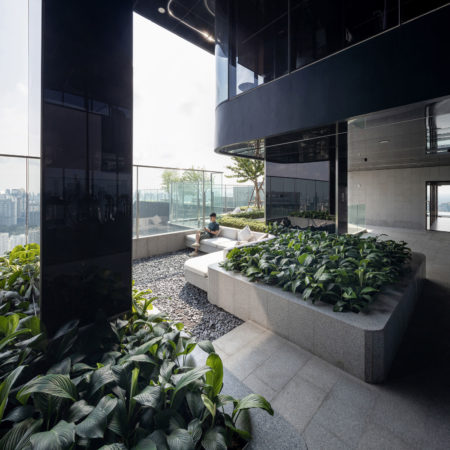 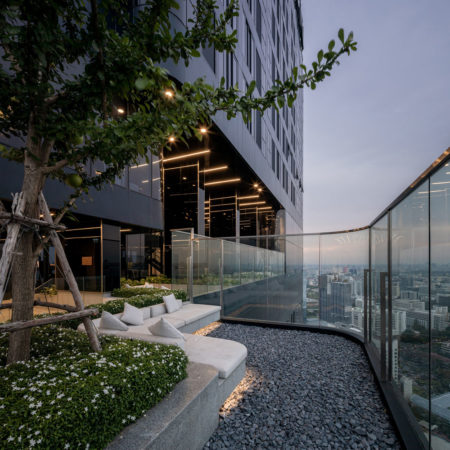 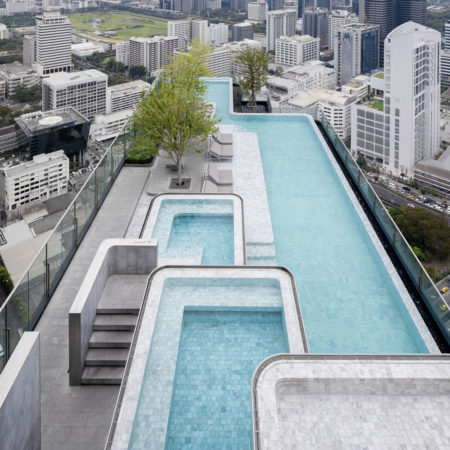 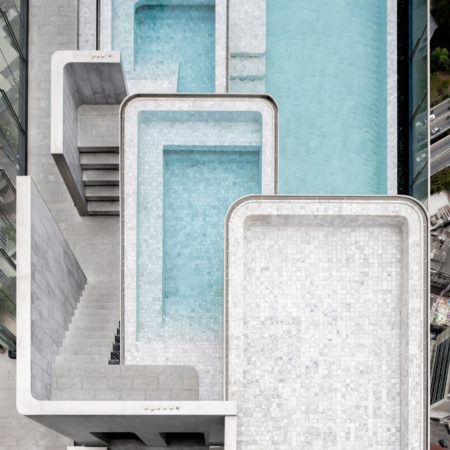 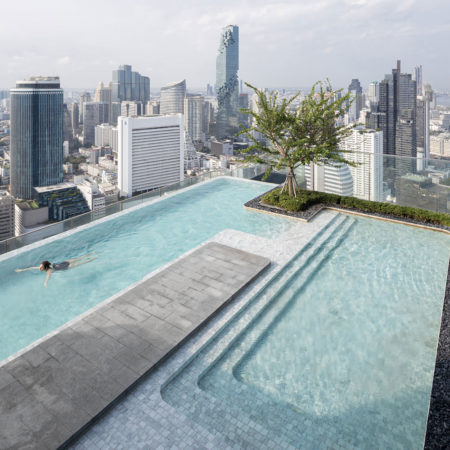 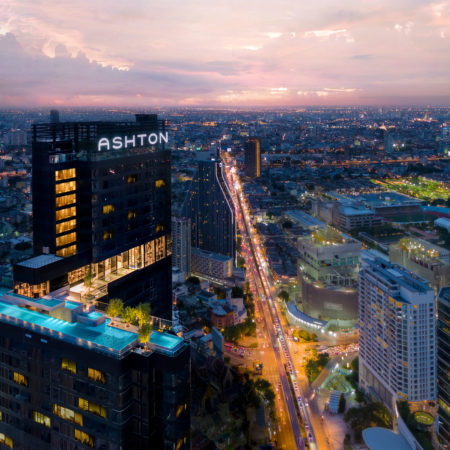 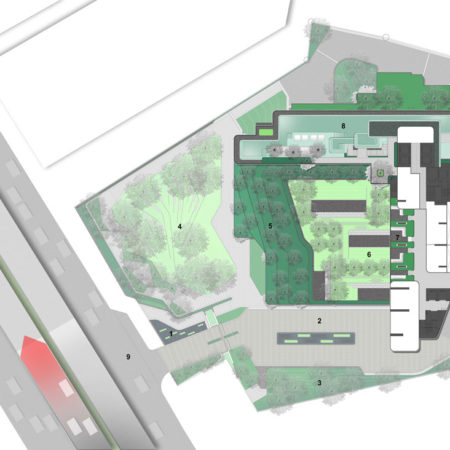 To encourage the residents to use public transport and travel on foot, a smooth pedestrian access ramp is clearly designated. The pedestrian passage is lined with a feature wall on one side, and shallow cascading water feature on the other to create a conceptual transition from the busier streets outside to the more relaxing garden inside.

With limited site area, the building footprint takes over more than half of the ground plane. The landscape design team then sought to limit paved driveway areas, maximize the soft landscape and, in the process, create a sizable frontal sunken garden. Although merely consisting of a simple green area, a group of evergreen and deciduous trees, and a series of seat walls integrating into the undulating ground, this garden acts as the catalyst for the inclusive and seamless urban green connection in many ways. For instance, the low boundary wall allows for visual linkage, mitigating the impact of abrupt public and private segregation. The trees within the garden are planted close enough to form a future interconnected canopy both between themselves and with the existing street trees on the other side of the wall, providing continuous shade to the footpath. Lastly, the overall significant undulating soft landscape helps to counter heat absorption, reduce surface runoffs, and create a pleasant green environment for the tenants and commuters. A well-known coffee shop also opens its door to the public in a concerted effort.

Working closely with the design team and client, the landscape team managed to bring the greening effort up onto the low-rise frontal section of the building, which houses an entry lobby, the coffee shop, and a stacking five-storey car park. Its position is unavoidably the focal point of every angle approaching the building and has a significant impact on the overall physical environment. The landscape team sees an opportunity of covering the entire structure with plants, resembling a “Green Mountain” with various textures and foliage that breathes life into the bold dark-colored high-rise building behind. The green facades – plants in many forms and layers, acts as a soft shield protecting the building from absorbing too much heat, and the stepping terraces planted with trees also help to filter dust from the roads before reaching the garden on its peak. These green terraces also help absorbing the smoked pollution from car park inside. Stepped terraces are intentionally created as a no-man land area, an unreachable shelter that allows the surrounded habitats such as the local birds to come.

The garden at the top of the Green Mountain eliminates the unpleasant sight of a bare roof and prevents glare from disturbing the residents living above it. Here, the similar design approach continues from the ground floor, leading to softscape area maximization. The only hardscape areas mostly exist in the form of sunken courtyards filled with gravel beds, which filter and convey any water that falls onto them back into the surrounding softscape. Combining with the extensive softscape areas, it is how the landscape can tackle the issue of excessive stormwater discharge from urban projects into the city’s main pipes. These sunken gravel courtyards also break down the vast scale of the roof, creating rooms for various activities and encouraging more interaction amongst the residents.

The 49th rooftop floor is the ideal place for the design team to create a recreational space away from the busy urban streets. As you move higher up, the tight enclosure of the urban surroundings opens up into a completely unobstructed view of Bangkok’s skyline. Covering most of the floor area, the swimming pool takes full advantage of this feature by extending its arms out as far as it could into the horizons, allowing enough space for a proper lap pool, kids’ pool, and Jacuzzis. The lap pool occupies the uninterrupted southern edge which opens up to the majestic and panoramic view of Bangkok city skyline.

Instead of placing one pool next to another on the same level, the landscape team thought beyond a flat plane and created a series of multi-tiered pools, with several Jacuzzis placed higher than the rest. This multi-leveled approach does not only allow for various exercise options or provides flexibility for the residents to appreciate Bangkok’s skyline without blocking others. The raised structures also free up extra room for other pool facilities such as outdoor showers and supporting mechanical systems. The use of light material colors of the pool underlines the simple rectangular forms and makes the pools seem larger than they are.

The rooftop gym and shared business center float above the pool level. Underneath the structure lies an observation deck consisting of several group seating areas. These seating areas are framed by building’s columns, creating semi-outdoor living rooms which are more intimate than the outdoor pools while also profiting from the extensive northeastern skyline. The plant selection here aims to soften sharp building edges and reflects the amount of sunlight each area receives. Setting further back under the building’s overhang, more shade-tolerant shrubs with big leaves are widely used, while the spaces totally open to the sky are filled with flowering fine-leaved shrubs and trees, creating contrast in textures and sensory garden.

The simple rectangular designs and straight lines with rounded corners inspire the overall landscape composition. The forms, similar to the building’s shape, can be seen applied throughout the entire development, which helps to bind the architecture and landscape together and create a well-integrated urban living experience. 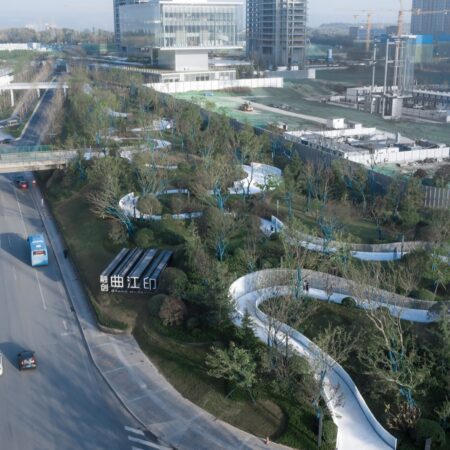 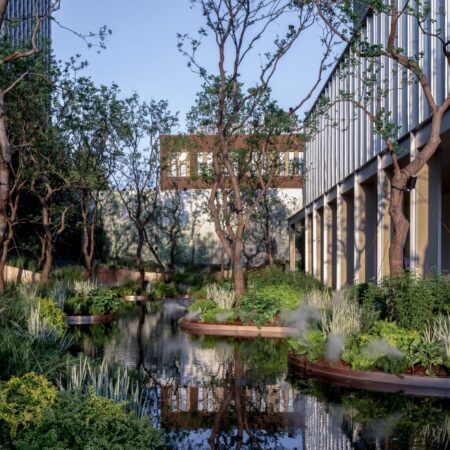 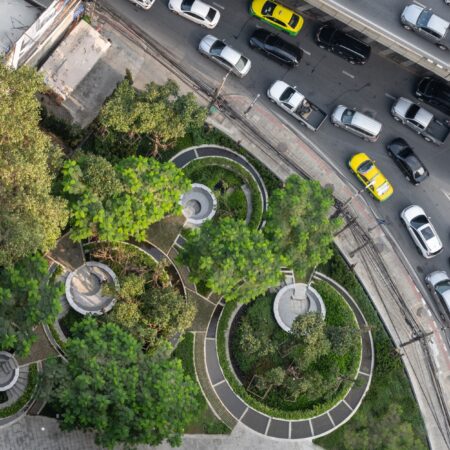 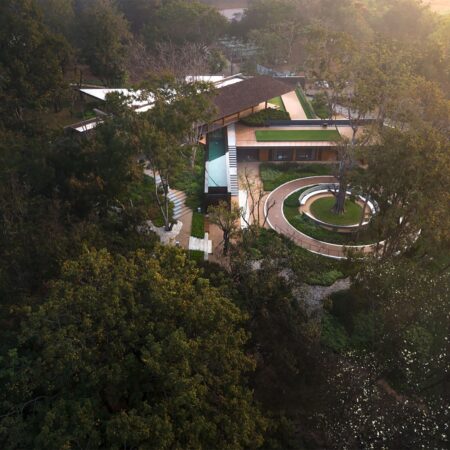 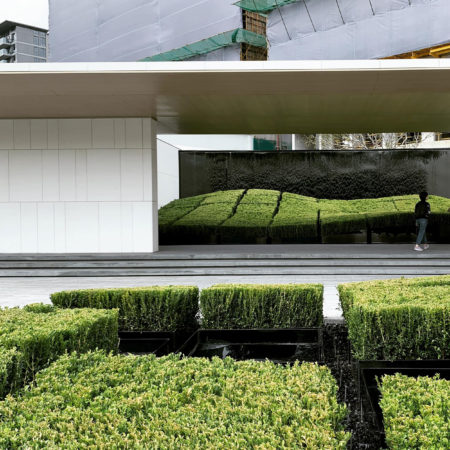 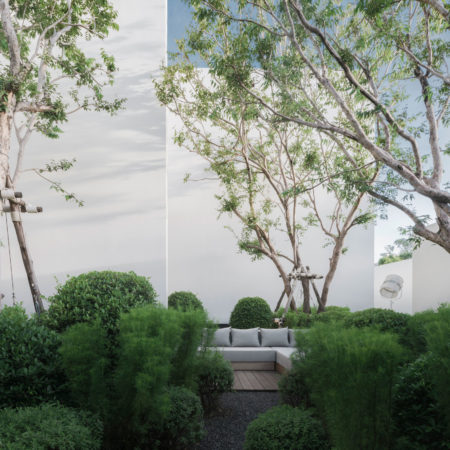