URBIO was formed in 2010 by landscape architect Mattias Gustafsson. Since then the office has expanded with its assignments and is now consisting of eleven full-time employed landscape architects. The projects stretch throughout Sweden as well as a few international locations.

Each project will be based on the ideology to creating well working out-door space that enhances peoples quality in their everyday life. To achieve this we believe in elevating the ecological relationships instead of neglecting them and bringing nature closer to the people living in the cities. We strive to push the boundaries on how to create ecosystem services which has a long term effect on health among the citizens and thereby creating a long term investment economically and environmentally.

We at URBIO wish to contribute to the debate on sustainable urban planning by developing conceptual projects and a toolbox of solutions for experiential, interactive interventions that push the boundaries for what is possible when integrating nature in cities.

URBIO offers customers expertise, creativity and reliability through the early sketches to finished construction documents. The dialogue with the customer is important, as is a well-conducted analysis, in order to attain the most value-creating solution. 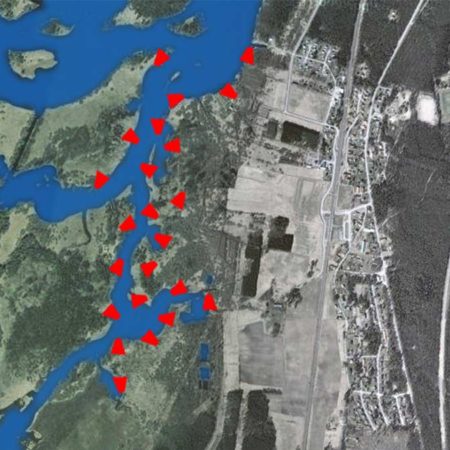 Some parts of the country are hit hard annually by mosquitos. The idea project which Urbio have developed is an ’anti-mosquito-tripod structure’ which provide favorable environments for mosquito-eating fauna in these areas. By creating shelter for both bat colonies and insect -eating birds (swallows and swifts) the mosquito population can be held down. An individual bat can eat about a thousand insects a day!

The habitats for the mosquito eating birds and bats are situated on raised tripods and can be placed at a beach edge, in marshes or in the water, thereby creating biological shields against the mosquito torment. The proposal would not only reduce the use of chemical control (pesticide) but encourage biodiversity. Why not make the hunting towers of the bats a tourist industry in itself? Local eco-tourism could be developed with bat safaris on the agenda. Then the bat’s predation of mosquitoes can be followed ’live’ using ultrasound detectors!

A restoration and extension of Karsuddens hospital 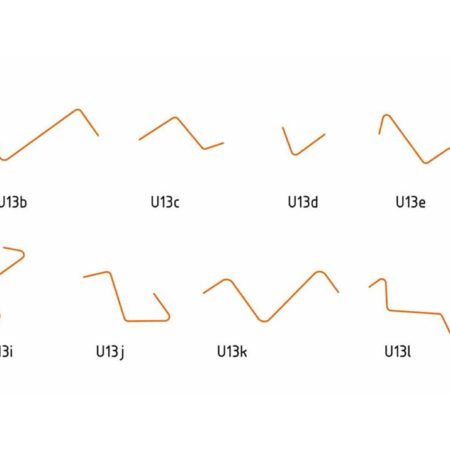 The new building’s main function has been incorporated into the existing park environment, including the reorganization of the entrance square, car parks and pedestrian areas in the hospital environment. Biofilic values and the positive health effect achieved through a green environment has been the starting points for the design of the outdoor environment. The Arboretum square at the main entrance is a species-rich plantations of trees. Here the planting beds extend their boundaries by creating bigger paving joints with vegetation. This is to create a more interesting square floor as well as taking care of storm water. The artistically portrayed tree protection bollards and water fountain gives the place a scenic identity. 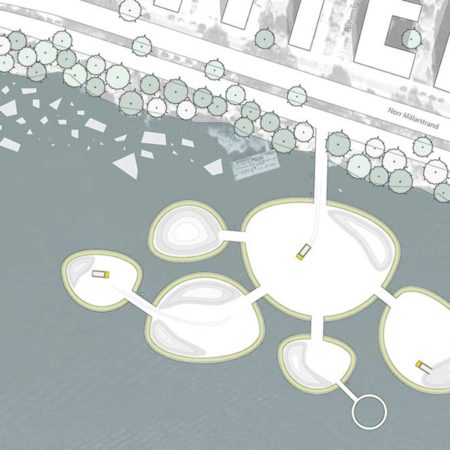 ’Melting Islands’ is an inventive form of promoting nature in the middle of the city while taking care of contaminated water. There is a problem in Stockholm and many other big cities around Sweden considering taking care of all the snow that is removed from streets and public spaces during white winters. In many cases the snow, which is heavily contaminated, is dumped into lakes and waterways. In many municipalities the removed snow have to be put on landfills where as many bigger cities have dispensation from this law. In this concept project the melting islands are placed on Riddarfjärden the most eastern inlet of Lake Mälaren, which lies centrally in Stockholm. The two incorporated clusters of islands have mobile landings with access from streets along wharves. The islands consist of marshy grassland and maritime meadows where snow is stored in heaps during winter. When spring arrives, the melting water is treated in the islands filtration beds through a bio retention systems. Now, animals and plants take over the islands and in late summer, after the chicks have fled the nests, sunbathing and picnicking urban residents may enjoy the new space. While solving the problem of contaminated snow masses collected locally during the winter months, the islands also enrich both city life and natural values. 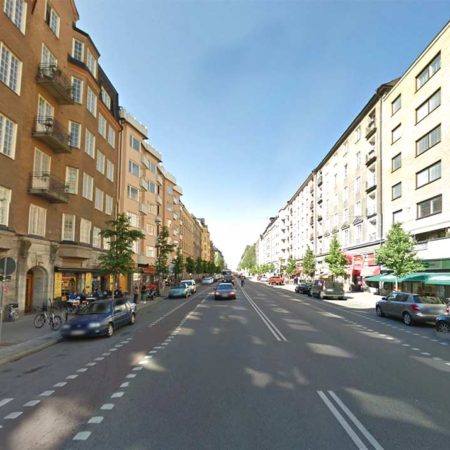 Hornsgatan in Stockholm is one of the unhealthiest streets to live on. The particle concentration in the air is very high and noise environment is bad. URBIO have made an concept project on how to solve some of these. What would happen if the street area here was equipped with arches imbedded with climbers spanning over the footpath! Not only would this reduce the speeds of the traffic, but also absorb noise, cleaned the air and take care of unwanted particles from surface water. The arches could serve as floating drainage leading rooftop water from surrounding constructions high above the sidewalks and into the rain beds where climbers are planted. This would help to subdue the flows in case of heavy rains and reduce the risk of flooded streets. By multiplying the amount of biomass in the streetscape a cooling effect can also be achieved in the event of a heat wave.
Today noise causes more deaths than traffic and it is time to take the noise issue seriously. Death-cause is partly due to stress-related diseases due to disturbed sleep and too little rest.
In addition to reducing noise from traffic and bind particles from the road and traffic, through its vegetated structures, the arches would also provide additional ecosystem services. By evaporation from the plants this would reduce heat island effects, increases the biological diversity, provide insect and bird sanctuary in the paved streetscape. These structures could be used for adding temporary structures on to. They could be taken in use by the cafés and stores that lining the street, making the streets a more useable space. 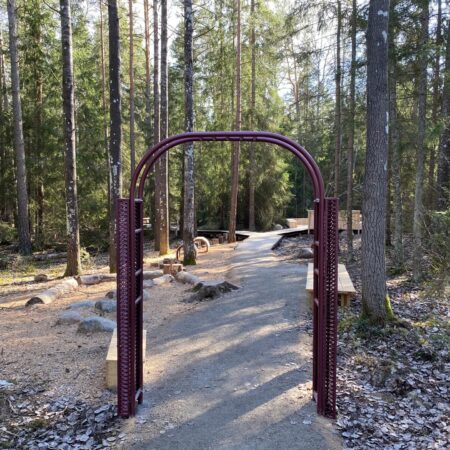